Anna Finch and the Hired Gun 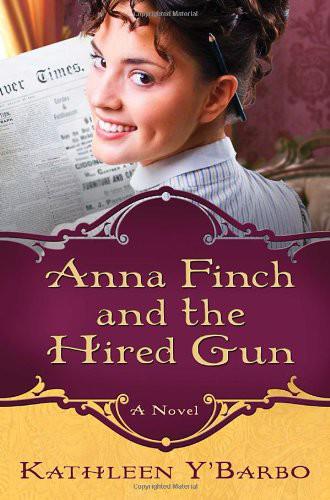 When an aspiring reporter and
a Pinkerton detective get tangled in Doc Holliday's story -
and each other - sparks can't help but fly.

Despite her father's attempts to marry her off, Anna Finch dreams of becoming a reporter. A chance encounter with legendary gunslinger Doc Holliday gives her the opportunity of a lifetime, but Pinkerton agent Jeb Sanders is about to ruin everything.

Though her father hired Jeb to keep her out of mischief, Anna's inconvenient attraction to her hired gun only multiplies her troubles. She doesn't realize Jeb has a score to settle with Doc Holliday, or that her association with the famous outlaw will affect more than just her marriage prospects. Between her father's desperation to see her wed and Jeb shadowing her every move, getting the story and fulfilling her journalistic ambition just got far more complicated than she ever imagined.

Praise for
Anna Finch and the Hired Gun

“Kathleen Y’Barbo has written a high-spirited novel about the kind of woman we’d all like to be: spunky, creative, witty—and a good shot.”

—D
I
A
NN
M
ILLS
, author of
A Woman Called Sage
and
Sworn to Protect

“I love Kathleen Y’Barbo’s deft hand, combining romance, comedy, and suspense. Her books are pure fun to read.
Anna Finch and the Hired Gun
was my favorite so far. I was hooked from the first word.”

“With excitement, romance, and humor, Kathleen Y’Bargo spins a tale that captures your mind. The author’s enthusiasm for writing spills out of every scene, creating, as it should, enthusiastic readers.”

—S
TEPHEN
B
LY
, award-winning western author of more than one hundred books, including
One Step Over the Border, Paperback Writer
, and
Wish I’d Know You Tears Ago
, commenting on
The Confidential Life of Eugenia Cooper

“A fun read. Delightful, engaging, charming, and yes, funny. Humor in the characters, and humor in the events. I thoroughly enjoyed this romp of a read.”

—L
AURAINE
S
NELLING
, author of the Red River series, Daughters of Blessing series, and
One Perfect Day
, commenting on
The Confidential Life of Eugenia Cooper

All Scripture quotations are taken from the King James Version.

This is a work of fiction. Apart from well-known actual people, events, and locales that figure into the narrative, all names, characters, places, and incidents are the products of the author’s imagination or are used fictitiously. Any resemblance to current events or locales, or to living persons, is entirely coincidental.

All rights reserved. No part of this book may be reproduced or transmitted in any form or by any means, electronic or mechanical, including photocopying and recording, or by any information storage and retrieval system, without permission in writing from the publisher.

Published in the United States by WaterBrook Multnomah, an imprint of the Crown Publishing Group, a division of Random House Inc., New York.

W
ATER
B
ROOK
and its deer colophon are registered trademarks of Random House Inc.

To Jess
Which rhymes with “bless”
For rescuing my mess!

And to my village
.

He was a dentist whom necessity had made a gambler; a gambler whom disease had made a vagabond; a philosopher whom life had made a caustic wit; a long, lean, blond fellow nearly dead with consumption and at the same time the most skillful gambler and the nerviest, speediest, deadliest man with a six-gun that I ever knew.

We had a little misunderstanding, but it didn’t amount to much.

Daybreak found Anna Finch astride her horse, Maisie, heading for the foothills west of Denver. Her father had given her the mare before he decided riding horses across the high plains was not for well-bred women of marriageable age.

As the youngest of five daughters, Anna had always been able to tug on her father’s heartstrings and get whatever she wanted from him, and what she’d wanted was a proper saddle. Not one of those sidesaddle contraptions where a lady had to balance herself and her bustles to avoid falling and injuring more than just her pride. Despite her mother’s vocal protests, Anna soon had exactly what she wished for. That old saddle still served her well, though Papa long ago believed she’d retired it, along with her habit of watching the sun rise out on the prairie, astride a trusty horse.

As an observer of people, Anna had learned by watching her sisters, who’d been forced to give up all but the most docile pursuits, that there would come a day when this would be asked of her too.
And once that day came, she’d no longer have the freedom to ride like the wind. Instead, she’d be left knitting in some parlor, praying for a breeze.

Shrugging off the thought, Anna urged her horse to a trot and let the mare find her own pace across the plain. Wild streaks of orange and gold teased a sky painted deepest purple as she loosened her hairpins and tossed them behind her.

If the maids wondered why they had to fetch so many hairpins from the mercantile, they never said. Nor did anyone question why Anna’s skirts were often coated in trail dust or why the occasional set of youth-sized trousers found their way into the carpetbag she carried on her rides. Those who resided under the Finch roof, be they servant or family, preferred a sort of self-induced blindness that relegated all but the most obvious to the edges of their vision. And sometimes even the obvious was missed.

Anna, on the other hand, prided herself in seeing details. As a girl, she’d begun the custom of writing in a journal. Once the risk of Mama or Papa coming across a written record of her life became a concern, Anna had turned to poetry and, on occasion, fiction. Writing poems and stories couldn’t be counted against her, she reasoned, so she’d created characters and events that gave her staid life in Denver a sparkle it might not otherwise have.

Her dream, however, was to use her love of writing to make a difference. Wouldn’t Mama and Papa be shocked to know their youngest daughter’s fondest wish was to become a journalist? She smiled at the idea of someday seeing her byline beneath a headline on the front page of the
Rocky Mountain News
or the
Denver Times
.

Maisie sidestepped a rift in the ground, jolting Anna back to a more careful observation of the trail ahead.

It did not escape her that tomorrow was May Day. How odd to think that the girls at Wellesley College would don their best gowns tomorrow morning and make merry at the May Day celebration, just as Anna had each year while there. Odder still that she’d gone from that to this, from a woman longing to be a wife to a woman bent on escaping the title by writing about it.

But that was another story, one she’d told time and again through the now-retired character Mae Winslow—named for the May Day celebration that spawned the first story.

Even her best friend Eugenia Cooper Beck, ironically one of Mae’s biggest fans, had no idea the real author of those embarrassing dime novels was Anna Finch herself.

Or had been, Anna corrected as another hairpin went flying. She’d negotiated for a dozen of those silly books, falling into the career backwards when a story she wrote as a joke for her literature class at Wellesley was mailed to an editor at Beadle & Adams on a dare.

Zombie Blondes by Brian James
Rowdy (A Taboo Short) by Jenika Snow, Sam Crescent
The Corpse with the Sapphire Eyes by Cathy Ace
A Bedlam of Bones by Suzette Hill
Ransom Redeemed by Jayne Fresina
That Summer: A Novel by Lauren Willig
Prisoner B-3087 by Alan Gratz
Western Dreams (Rescue Me Saga Extras #1) by Kallypso Masters
The Case of the Crooked Carnival by Michele Torrey
Vampire Mystery by Gertrude Chandler Warner