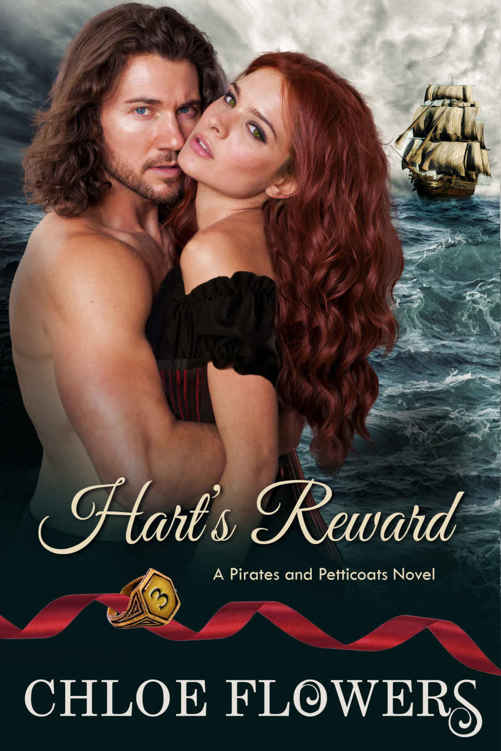 All rights reserved, including the right to reproduce, distribute, translate or transmit in any form through any medium by any means.

Edited by: The Editing Hall and Kathy Wilhelm

This book is dedicated to my parents, husband and children, who have supported me and encouraged me in realizing my dream of becoming a writer.

To Bonnie LaBadie, you know why.

A huge thanks to NorthEast Ohio Romance Writers and Romance Writers of America for providing the resources, the mentorship and especially the friendships. I’m a better writer because of you ladies! The ladies of Indie Romance Ink, especially Barbara Frothy, Bella Andre and Courtney Milan for providing excellent workshops, insights and encouragement.

Love and smooches to you all.

Before Keelan and Landon can pursue the pirates who kidnapped both her brother, Conal, and his ship, they must complete their mission to help smuggle runaways from Charleston to Philadelphia. With slavers in pursuit of their hidden cargo, Keelan is thrown into a world of hate and deception. When an accident takes Landon’s memories from the past five years, Keelan must fight for her life as well as recapture Landon’s heart.

How can she help Landon remember why he fell in love with her when he doesn’t even want her on his ship?

Keelan rolled over and nuzzled Landon’s neck. His chest vibrated with a satisfied hum. She kissed the place where his pulse surfaced and he pulled her closer. She stroked small circles on his chest, around his heart. It thudded strongly beneath her fingers.

“Good morning, love,” he murmured. “Did you sleep well?”

Keelan smiled and kissed his shoulder. “I slept well, but not long…although I’m not complaining.”

Landon ran a gentle hand down her side to her hip and pulled her closer before caressing the naked curve of her bottom. “Should I apologize?”

“Absolutely not.” She snuggled closer and kissed his chest. “I’m enjoying my role as a new bride.”

Landon’s hand stilled. “Keelan…I’m sorry we couldn’t be properly wed in Harbour Town. If things had gone as I’d planned, we’d be married in the eyes of the church by now.”

“It isn’t your fault.” She placed her hand over his and brought it to her heart. “No one could have predicted that my brother’s ship would be taken by pirates with him aboard.” She squeezed his hand. “How could we go on with the wedding without him?”

His chest rose and fell with a deep sigh. “Making you my wife is important. I promised we would marry.”

Landon brought their interlaced fingers to his lips and kissed them. “I love you, Keelan. I promise, as soon as we deliver the cargo to Philadelphia, I’ll seek out a priest to marry us.”

“I believe you.” Landon’s eyes were a startling blue, especially against the backdrop of his tanned skin and dark locks. “I know it took me a long time to finally trust you, but remember, I was brought up to be wary of men of the sea. The woman who raised me was a bitter woman left alone while her husband sailed for the Royal Navy.” Finding out Catherine wasn’t her real mother had been a relief, actually. The woman never showed any affection for her, and spent most of her time in her shop in Chatham, England, leaving Keelan to be raised by her maid and the valet, Daniel.

She smiled. “Then I came to know you, and the kind of man you are. How could I not fall in love with you?” She moved a hand over Landon’s heart. “Her husband didn’t ask her to sail with him like mine did.”

Landon rubbed his thumb over the top of her hand. “Still, I gave you my word, and I’ll see it through, as soon as possible.” He gave her a pained grin. “Your brother, Conal, may be content with our hand fast, but I know your mother, and she’ll have a word or two to say if I escort you across her threshold before a priest says we’re married.”

She tapped the scar on his chin with her finger. “Then we’ll have to do everything we can to keep you in her good graces.” Kidnapped from her crib as a toddler, she’d not yet met her parents. It was all the more reason to finish their business and find her brother, so he could take her home to meet her real family.

“We need to make a quick docking in Charleston to pick up the last group of runaways and then we’ll set sail northward.” Landon took a quick breath. He worried about her; it seeped into his eyes. He worried that the price on her head in Charleston would muddy up the sediment that had settled into the dark places there. Lower men who held no honor or pride would seek her out for the reward. True, the pirate, Gampo, had departed the city but he’d left a message at the docks promising a reward to anyone who found Keelan Grey and brought her to him. If she was not alive, so be it. He’d accept a piece of her scalp as proof.

If only she didn’t have such a distinguishable head of hair. Once, the curls had brushed her waist. God had also graced her with a deep auburn color; it was a cross between a chestnut brown and burnished copper, hence Gampo’s conciliatory acceptance of a chunk of her scalp with her hair attached.

She was well-disguised, though. The tavern keeper’s wife at The Whistling Pig had helped her dye her skin and hair. She’d passed as a Persian galley boy on her brother’s ship easily enough.

The fact that they had to return to Charleston so soon caused the worry.

Landon had told her about her Uncle Fynn, who had once been made a pirate’s slave. He had insisted on being a part of a secret society who helped slave families escape bondage. It was well-known that single runaways had a greater chance of success, but families, with children, less so. Fynn focused on freeing families, even though the danger was greater. Although he’d been killed during the last battle with the pirate Gampo, Fynn’s two sons along with Landon and Conal still continued Uncle Fynn’s mission as Freedom Runners by using their merchant ship business as a distraction. The two entities formed an easy partnership.

Gampo. A soft shiver trickled up her spine. “Perhaps my name will have been forgotten. Do you think I’ll still be in danger in Charleston, even with Gampo gone from there?” It was a half-hearted optimism that made her ask, even though the answer was obvious.

Landon’s jaw clenched as it rested against her head and she took that to mean ‘yes.’

“He left word on the docks he wanted you dead or alive. All that’s needed to collect the reward, is a token from your head.” The skin on her scalp tingled. Landon reached up and smoothed her curls. “You’ll have to remain Mahdi, our Persian galley boy, until we depart Charleston,” he said. She could hear the smile in his voice. He was thinking back to the day he discovered her disguised as Mahdi. That day, she’d managed to fall into the brass bathing tub…while he occupied it. Her disguise had been brilliant until he noticed the line of demarcation across her chest where she’d applied a stain to her skin. He later told her that it was her the color of her eyes, that gave her away.

“When will we reach Charleston?” It was imperative that they complete this mission quickly. The next one, chasing after her brother, would be no less dangerous.

“The quicker we can pick up our cargo there, the sooner we can head for Philadelphia to drop them off and sail for Jamaica to catch up with your cousin. With both the
Desire
and the
Reward
on their tail, the pirates who stole your brother’s ship will not find a place to hide in Jamaica.”

She, Landon and her cousins, had been awaiting her brother at the hotel when a member of his crew found them and gave them the news.

Under the cover of thick fog, a group of pirates seized his ship. They forced most of the crew into long boats and set them adrift in the murky mist of the harbor. By the time the men were able to paddle to the wharf, the pirates had taken the
Seeker
and her brother and set sail for Jamaica.

As soon as he could pull up the anchor, her cousin took the
Reward
to give chase through the fog, leaving his younger brother, Ronan, to travel with them aboard the
Desire
. At fourteen, Ronan, whom everyone still called Ronnie, didn’t take the news well that his brother had left him behind. In fact, he’d been downright dour.

“Do you know what started the animosity between Gampo and Fynn?”

Landon took a deep breath and exhaled. “No, but we’re determined to end it. It’s my hope there are no more lives lost in the process.” He brushed the ringlets from her face. “Fynn was the first casualty. For twenty years those two acted more like a couple of toothless dogs than ruthless enemies.”

Keelan discovered she had a family and siblings just a day ago. Losing that connection so soon after finding it would be unbearable. “Can we find a way to negotiate a truce?”

“Perhaps.” He kissed her forehead. “If we get there in time. Your brother sometimes needs a voice of reason. He tends to react first and ask questions second.”

“Are you saying that he’s impetuous?” She poked him in the ribs.

Landon grinned. “It must be a family trait.”

“I wonder if he’ll dress in women’s clothes?” She giggled.

Landon slipped his hand up to cup her breast. “While you have learned to act the part of a fourteen-year-old boy with a fair amount of success, I fear your brother would fail, in a most miserable fashion, disguised as a woman.”

Thinking of her older brother’s neatly trimmed beard and upper arms nearly as thick as her thighs, she had to agree.

With that, Landon pulled her on top of him and gave her a long, languid kiss, cupping her bottom and pressing her hips to him. His mouth began to move more urgently against hers and she thrilled in the heady passion they shared for each other. Her heartbeat quickened and she trailed her lips over his neck, kissing and licking the tender skin beneath his ear. His skin was a golden brown from the sun, his chest covered with a light coat of dark hair and chiseled muscle.

He stroked her hair. “You’ve stolen my heart, love, and burrowed so deeply into my soul you’ve become a part of it.”

She kissed him and he stirred against her. Azure eyes smoldered with passion and his mouth quirked up into a slow seductive grin. They were going to be late. Again.

It was sometime later before they emerged to the main deck. Gus, Landon’s first mate stood at the helm, gazing out over the ocean. “Well, that don’t look good,” he said, pointing to the west.

Keelan tied her hair back in a long scarf, once again playing the part of Mahdi. Swift, low moving gray clouds formed an enormous anvil shaped wall that consumed half the horizon. In the distance, lighter gray sheets of rain fell beneath it.