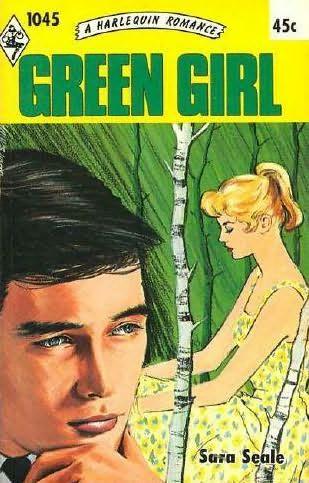 Harriet Jones, an 18 year old orphan, thought she had met her Prince Charming when Rory Lonnegan asked her to come to Ireland to marry him. But a disappointment was in store for Harriet when she arrived at Castle Clooney.

“
Affection? Pooh! you speak like a green girl, Unsifted in such perilous circumstances.
”

IT was a sorry start to that brave new life in a country often dreamed of, to be lost in a mountain fog for want of a little common sense, she thought disgustedly.

She could almost hear Matron saying with that familiar bite of exasperation:
“
It
would
be Harriet Jones! Of all the orphans I
’
ve had in my charge, that girl could be relied upon to land herself in a situation that could quite well have been avoided.
”
And that, supposed Harriet Jones, withdrawing a foot hastily from a hidden pool of bog-water, was true. She should have waited at the bleak little station, as she was bid, when no one turned up to meet the train, instead of obeying that uncontrollable impulse to explore. But the journey had been long and fraught with tedious vexations, and freedom was too fresh and unfamiliar to endure a two-hour wait for the arrival of the next tra
in
from Dublin.

“
Where are you for?
”
the g
nome
-like porter had enquired.
“
Castle Clooney, is it? And you say you should be met?
”
he said with plain disbelief.
“
There
’
s few visitors go there and if you was expected, they
’
d have sent a car
.
”

“
I
am
expected,
”
Harriet had answered, a little daunted by her chilly reception. She had thought from her ignorant, fiction-fed knowledge of Ireland that strangers were welcomed as long-lost friends.

“
Was you so?
”
he retorted with the disapproving sarcasm of someone who suspects a leg-pull.
“
And wouldn
’
t I be knowing if that was true? Himself would have alarrumed me of the fact.
”

“
Notyfied me—toult me—and who would himself be but Mr. Lonnegan? You wouldn
’
t be conversant with the English tongue, perhaps, and you a furriner?
”

“
That
’
s what I said,
”
he retorted disconcertingly.
“
You
’
ve likely mistaken the station.
”

“
I have
not
mistaken the station,
”
she said firmly.
“
This is Slyne, isn
’
t it, and the nearest stop for Castle Clooney? If you care to ring up you
’
ll no doubt find there
’
s just been a muddle about times of arrival.
”

“
Ring up, says you! There
’
s no telyphone at the Castle; himself has a mislike of
modern
contraptions and visitors alike,
”
and he shambled away, leaving her standing on the deserted platform.

She told herself it was only too likely that the charming, casual Rory Lonnegan of Castle Clooney had given her the wrong train and would gaily drive up two hours later declaring she had misread his letter.

Meanwhile, her impatient feet itched to explore; a two hours
’
wait at a draughty little wayside halt which boasted no shelter would be chilly on a late October afternoon. The mist wreathed mountains looked invitingly close, the temptation had been irresistible.

Nearly two hours later, however, that unaccustomed bid for independence had become merely an act of folly, and her situation alarming. She had not realised that the mist rolling down from the hills could so soon turn to fog, blanketing all landmarks, even had she known what to look for to guide her back again. She had tried to retrace her steps to the station or at least find the railway track to follow, but either she must have walked in circles or taken a wrong direction, for the ground became rougher and unseen pools deeper.

As darkness gathered and the mist began to assume horrid shapes closing about her, she had a sensation of drowning. It was true, she thought, without surprise, that your past life flashed before your eyes for the few events of any remark in her own seemed uncomfortably clear. Ogilvy Manor, that very superior, privately endowed orphanage whose inmates were seldom allowed to forget their good fortune in having escaped a State institution, rose up before her mental vision in mute reproach.

“
Wool-gathering!
”
Matron had repeatedly told her,
“
always wool-gathering, when your mind should be employed with practical, useful matters and not the impossible situations in fairy-tales and rubbishy novels.
”

Harriet had found this to be true, but how to explain that day-dreaming was an escape, a harmless method of dissipating dullness? Sometimes Harriet would even have wondered if she had invented Rory Lonnegan, if it had not been for the letters, for she had met him only the once; a chance meeting in the town where she had been miraculously sent on an errand and had worn a new pink cotton frock. He had bumped into her coming out of a shop, spilling her parcels, one of which had contained eggs which spread all over the pavement in a glutinous mess which had filled her with dismay since she had spent the last of Matron
’
s money. He, the good-looking stranger, had insisted on buying some more and then taken her off to a cafe for ice-cream. It was summer and couples were sitting on the grass in the park, and Harriet and her charming young man had sat there too. Perhaps, she had thought, he had time to kill, perhaps he had even found her attractive or perhaps, as later became clear, he was intrigued by her innocent evasions when he tried to find out more about her. She was a flattering listener, greedy for all he could tell her about his castle in Ireland, which to her had been the crowning delight that such fabulous places did exist outside novels and fairy-tales, and so eager for more was she, so ready to believe in whatever he chose to tell her, that he had promised good-naturedly to write.
“
We will be pen-friends, Princess,
”
he told her,
“
and one day I
’
ll come back to England and maybe marry you when you grow up.
”
She was nearly seventeen, but he clearly took her for a child.

He was returning to Ireland that night, so was unlikely to learn the true nature of the address she gave him, and although she did not think he would write, she would be able to live on this red-letter day for ever.

But he had written, and although his letters were infrequent and often very sketchy, they kept the fantasy alive for Harriet, who would sometimes read the letters aloud to chosen friends since they earned her a respect she had never known before. If it was clear from stray passages that her address had misled him, where was the harm in letting
him
think that Ogilvy Manor was a private country house and she the only child of doting parents?

Why, thought Harriet uneasily, am I remembering all this as if Matron was saying look where wool-gathering has got you now? But the thought of Matron brought her back to the morning and Matron
’
s last-minute admonitions, little knowing she was being deceived.

“
Now, Harriet, don
’
t wool-gather and get into the wrong train. Clapham is a big junction and anyone will direct you if you should go wrong. The family expect you in time to see to the childrens
’
lunch, and do try to remember that this is the third time Ogilvy
’
s found you a post, and try to keep it. We don
’
t want you turning up here like a bad penny yet again, do we?
”

It had been on the tip of Harriet
’
s tongue to tell her the truth, but instinct had warned her that to announce airily that she was travelling to Ireland instead, upon the invitation of a young man she had only met once who had indicated he wished to marry her, would not only be disbelieved but viewed with the gravest suspicion. So she had contented herself with a promise to write.

A legacy had provided the second red-letter day in her uneventful life and had changed everything. No one at Ogilvy
’
s could imagine why Harriet Jones had been named for a bequest of fifty pounds in the will of one of the orphanage
’
s more trying benefactresses except that her manners were good and had presumably, impressed the tiresome old lady, but there it was. Harriet, to whom fifty pounds seemed a fortune, had written post-haste to her Irish pen-friend, describing her luck in those very terms, and he had replied more promptly than usual, inviting her for a visit to his castle, giving times and arrival of flights, and also of boats and trains should she be averse to air travel. He couldn
’
t, Harriet had thought, starry-eyed, have made his intentions plainer with graceful hints that Clooney needed a mistress and he
himself
had thoughts of settling down; besides, she was eighteen now and no longer a child.

She had replied in haste that she was coming at once, since the job in Clapham coincided happily with a departure that would be unremarked, and opportunity only knocked once. She had added a hasty postscript correcting her first extravaganza of a fortune because she was a truthful person, and set out on her big adventure with hardly a qualm.

She began to move cautiously, stumbling over stones, catching on thorn bushes, dragging her feet in panic from marshy pools, expecting the traditional bog to claim her any minute and swallow her up without trace.

Every so often the thick mist parted for an instant to reveal grotesque shapes which could be boulders but were probably something worse, and then she thought she saw two wolfish faces peering at her through the fog. Her scream was involuntary, and although she knew she was imagining things, she could not control the instinct to turn and run. As she lost her balance, her feet slid from under her and she felt herself falling into space.

She did not have far to fall, but as she landed in some heathery cleft between two boulders, she experienced a violent stab of pain as her ankle twisted under her, and burst into tears.

She lay there weeping while wet from the waterlogged turf soaked through her new suit which must now be ruined, and her tears fell faster as she thought of all the money she had so recklessly spent. One couldn
’
t, she had argued with herself, arrive at a castle as a prospective bride unequipped for social occasions, but fifty pounds, she had discovered, did not go very far in these days, and although she had bought frugally, there had only been enough of it left to pay for a single fare.

It was quite dark now and she thought she recognised a new sound, the sharp clatter of stones and pebbles dislodged by an unwary footfall, and the unmistakable sound of breathing. She froze into immobility, remembering that Rory had said there was a gaol near the castle and every so often prisoners escaped and hid in the mountains. It was not a man, however, which the swirling mist revealed to her for a moment, but no less alarming; the wolfish faces had reappeared.