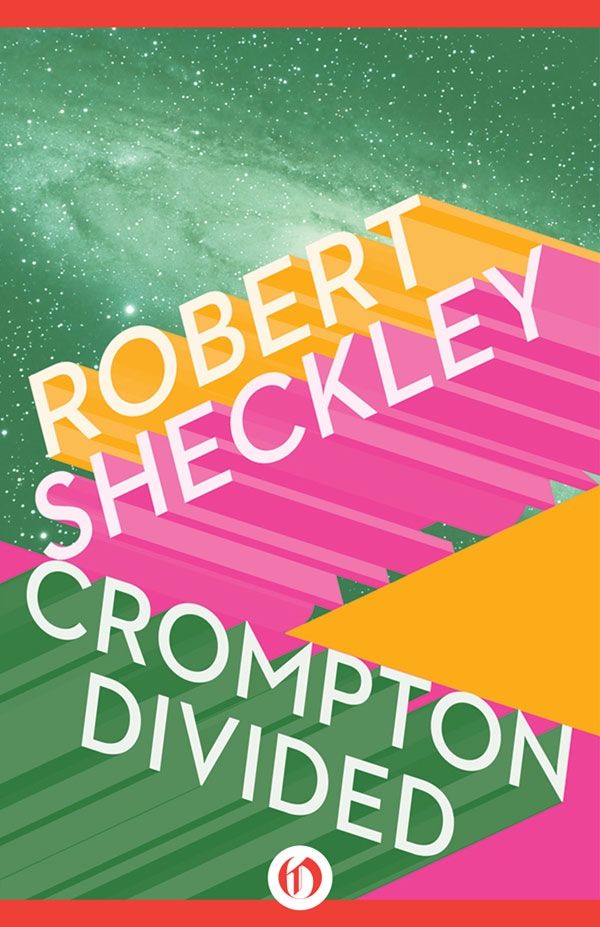 TO MY WIFE WHOEVER SHE MAY BE

The sign at the side of Route 29 read: welcome to bergamot, new jersey, home of psychosmell, inc.

The enterprising traveler might have figured that much out for himself by the intermingled fragrances evident even at this distance from the central plant. Even a casual nosologist might well have distinguished cassia and clove, rosemary and cinnamon, sassafras and vetiver, all pierced through by the clear sharp odors of ginger, lemon, and linaloe.

The central plant sprawled on the outskirts of town: a low rambling series of one-story terra-cotta buildings set on some twenty acres of rolling parkland, all surrounded by a double-link constrictor fence.

The guard – a beefy android modeled to look like a heavy-drinking Irishman of the Night Watchman class – looked up when the Sills-Maxwell puttered quietly up, driven by a small man in a plaid oxygen mask. There was a half-second pause while the guard’s perceptions took up synaptic slack; and then the android grinned cheerfully and threw a mock salute.

‘Well, now, sure and if it ain’t Mr. Alistair Crompton, our very own Chief Tester. How’s the love life, Al?’

‘Go screw yourself,’ Alistair said. This is a particularly bad insult to lay on an android, since these unfortunates are capable of that anatomical irregularity. But Mike Maginnis did not take it amiss. For five years he had greeted Crompton in the same way, and had received the same answer. Any other response would have confused him.

Five minutes later, after parking the Sills-Maxwell in its customary place, Crompton was walking through the dust-free corridors of Psychosmell, Inc. He had entered at precisely 8:52 a.m. as always. Now he took his customary walk down Lavender Lane, as the central corridor was irreverently named. He nodded to Mr. Demiger, the Chief Macerator, and to Miss Resutte, the Assistant Distiller. He passed the inevitable guided tour, and heard Dominic Spellings, the Company Public Relations Man, telling the little group of tourists how the Yakuts of north-eastern Siberia beat the bark of the storax tree, causing the balsam to exude into the inner bark, which was then removed, boiled …

Crompton walked on, past the fragrant storerooms with their bales of cassia, hyacinth, rosemary, peppermint, geranium, and patchouli. He passed the special storerooms for extraterrestrial substances, each storeroom possessing its own controls for air mix, humidity, temperature, and dew point. In these the less costly alien substances were kept: indrigita oil from Cepheus II, chips of cannotia (Nile-smelling before processing in palmerosa oil and ionone), baled leaves of the night-blooming ocepti, and the like.

Beyond this, the corridor branched. Crompton took the left turn and came to the door at the end marked CHIEF TESTER’S ROOM. This was his office, the heart of his little empire within a monopoly. This was where Crompton produced those concoctions that had brought him to the attention of leading olfactophiles, and had made his work a standard of excellence in the field.

His assistant, Miss Anachos, was already seated at one of the testing tables. ‘Good morning, Mr. Crompton,’ she said. She was a willowy brunette with hair twisted into the Medusette style so popular that year. Crompton nodded curtly. He had lusted after Miss Anachos every day of the two years she had been working for him. He had never revealed this, of course, because it would have been improper, undignified, and futile: attractive young women were not for the likes of Crompton, who was unattractive physically, mentally, and spiritually.

Crompton peeled off his oxygen mask; it was unnecessary in the superclean and hyperventilated air of the plant. He shrugged his narrow shoulders. ‘It’s all a lot of nonsense,’ he said briskly. ‘Good for morale, though, I suppose.’

‘Good for
your
morale, I should hope,’ Miss Anachos said, speaking in the italics Crompton had grown to loathe. ‘After all, you’re the
star
today!’

‘I am not insensible of the honor,’ Crompton said. ‘However, congratulations are a little premature. The Board of Directors meets at noon sharp, and it is then that I make my presentation. What Mr. Blount will think of it …’

‘He will
adore
it!’ Miss Anachos said. ‘You are the best psychosmell contriver in the business, Mr. Crompton, as you very well
know!
’

Miss Anachos’s appreciation of his talent – unmixed with a scintilla of regard for him as a man – was beginning to pall on Crompton. He sat down at his workbench and said, ‘That is as it may be, Miss Anachos. Now to work! Bring me Preparation H. I shall also require the Schedule Four materials.’

‘Yes
sir!
’ She swished past him, and Crompton caught a fleeting impression of the seminatural fragrance of her skin. Christ, he thought, I wish I could bottle
that!
Then, resolutely, he put his mind to the work at hand. A lot was riding on the job he turned out in the next several hours. Just how much, not even Miss Anachos could know.

The power of smell to elicit memory was well known to antiquity. Hermippus of Smyrna relates, in his
Botanical Researches
, how King Pherecydes of the Thessalonians paid two hundred talents of silver for a thumbnail-sized fragment of Arabian anicerys, which, compounded with myrrh, frankincense, and powdered oryx horn, and mixed with Hurcanian mead, kindled in the partaker a vision of a vast and bloomy marble hall set on a high mountain in the Caucasus. In Babylonia, before the Hittites, skilled thaumaturges cured plague and schistosomiasis by skillful concoction of odoriferous substances. In China, an oil pressed from night-blossoming asphodel, treated with silver, powdered ebony, and lotus root, wrapped with red willow leaves and stored for ten years in a granite chalice, was reputed to give a man the ability to remember his face before he was born.

It was not until the twenty-first century, however, that the capacity of odor to elicit memory, dreams, and visions was popularized, systematized, and commercialized. The reason for this was the sudden availability of extraterrestrial odoriferents with unusual and dramatic qualities. Dalton’s expedition to Slia II brought back agania root, hkpersia, and the now ubiquitous meningiis leaf. Von Ketter’s three voyages to the Raschid Worlds introduced sisia, oil of mnoui, and the incomparable attar of brunchioses. These substances were psychotropic: they combined well with certain Terran bases. For the people of Earth, bound to their planet by the high costs of extraterrestrial travel, these substances were a genuine smell of the unknown, an intoxicating luxury, and a bittersweet journey into the hidden recesses of their own minds.

Shrewd businessmen organized the Extraterrestrial Fragrances Guild, and kept it a close monopoly. The moderately well-off could buy any one of a dozen commercial scents, all with memory-releasing powers. The wealthy could go to a firm like Psychosmell, and, for a price, have an expert like Crompton mix an individualized fragrance for them, tuned to the configuration of the yellowish-brown fibers deriving from the ganglionic cells in their olfactory bulb outcrop. A man like Crompton was capable of pinpointing specific olfactory-memory hookups and their stimulators, and was thus able to produce memories on demand.

But Crompton’s finest work, his greatest challenge, and the ultimate testing of his skill, came once every five years when the Board of Directors of Psychosmell assembled from various worlds and met at the mother company in New Jersey. For that occasion, it was customary for the Chief Tester to concoct a specific substance for the world’s greatest gourmet of smell – the legendary John Blount.

No expense was spared, of course, on this day of days. From the deep vaults Crompton ordered up the costliest of substances – oil of redolence from Tarmac II; ten entire fingers of rhzia bark from Alclepton, valued at sixty thousand dollars an ounce; and even sixty grams of the incomparable essence of lurhistia, derived from the buds of the hypervalidation plant that grows only on five acres of hallowed ground on the dingy planet Alphone IV.

These substances, worth a fortune on the blacksmell market, were handled casually on this auspicious day. And Crompton wrought wonders with them.

The concoction could only be made at the last moment, just before presentation; for so volatile were some of the rare oils, so subtle the esters, so cranky the ketones, that the precious essence would transmogrify itself in a few hours.

Crompton labored, and all of the Psychosmell people waited in anxiety, for they would all share in his triumph or defeat. Old John Blount would predicate the bonus for all workers on his mood of the moment. And his mood of the moment would be determined by his judgment of Crompton’s concoction.

After the presentation, the plant would close for two weeks’ holiday. Just before closing, bonuses would be announced. So Crompton’s degree of success could mean the difference between a week on Luna if all went well, and a day in Asbury Park if it went any other way.

Crompton worked, oblivious to the almost palpable atmosphere of strain. Lavishly he mixed in an entire gram of lurhistia – a ten-thousandth of the entire galactic supply! Miss Anachos caught her breath when she saw this: she so
hoped
that Crompton would not overdo the rarity factor, nor rely on the
shock
of expensive alien substances to make his effect. Old John Blount was too wise a fox to be taken in by
that!

Icy cold, utterly concentrated, Crompton worked away with his balsams, gums, dessicated rhizomes, twigs, bits of bark, leaves, muck sacs, peelings, roots, pressed flower petals, fruits, seeds, and the like. Watching his icy control, Miss Anachos wanted to scream. She was aware, of course, that Crompton was a very special kind of freak, barely human. She didn’t know much about it: people said that some sort of unlucky accident had befallen Crompton at birth, and he had been subjected, in his early years, to the now discredited psychomechanical techniques of Massive Cleavage. That meant that Crompton was
missing something.
But what that something was, Miss Anachos did not know, or care. She tended to consider Crompton a robot, without personal tastes or history. Most people thought of Crompton in that way – as a windup man without feelings, without a soul.

They were wrong about this. Crompton was shortly to show them just how much soul he had.

The long black hand of the clock on the wall crept past the quarter hour, nearing high noon. Miss Anachos gritted her teeth. Why didn’t he finish? What was he waiting for? Didn’t he realize that her
bonus
was resting on the results of his talented nose and quick, precise bony white hands?

At five minutes to twelve, Crompton looked up from his workbench. He held in his hands a plain testing bottle of rose quartz. He said quietly, ‘I shall arise now and go to the Board Room. You may join the other workers in the Assembly Hall. I will clean up personally, later, as always.’

The Probability of Murder by Ada Madison
Three Bargains: A Novel by Tania Malik
In a Different Key: The Story of Autism by John Donvan, Caren Zucker
Spoiled Evelyn (The Mail Order Brides of Boot Creek Book 4) by Carré White
Falling Up by Melody Carlson
Skating on Thin Ice: Seattle Sockeyes (Game On in Seattle Book 1) by Jami Davenport
Trail of Hope (Tales of the Scrimshaw Doll) by Vanlandingham, Heidi
Our Song by Morse, Jody, Morse, Jayme
Wild Flame by Donna Grant
The Collector by Cameron