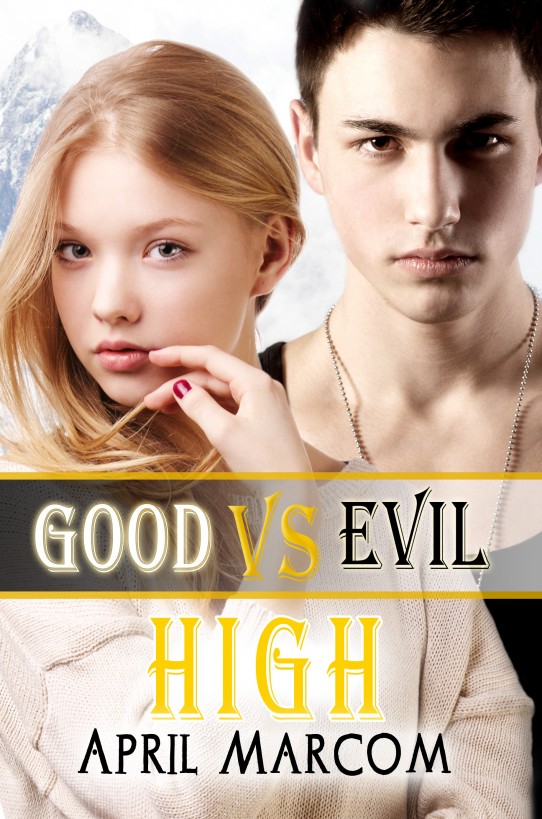 Names, characters, and incidents
depicted in this book are products of the author’s imagination or
are used fictitiously. Any resemblance to actual events, locales,
organizations, or persons, living or dead, is entirely coincidental
and beyond the intent of the author or the publisher. No part of
this book may be reproduced or transmitted in any form or by any
means, electronic or mechanical, including photocopying, recording,
or by any information storage and retrieval system, without
permission in writing from the publisher.

Published in the United States of
America.

For my mom, who helped make my
dreams come true.

Deadly disaster strikes when Good
falls in love with Evil.

Kristine’s just been adopted into North Haven
High, an ice castle hidden in the farthest reaches of the north for
orphaned teenagers who possess an unfailing disposition for good.
And she’s just in time for their Winter Competitions, a rivalry
held each year between NHHS and Southland Cinder High, a school
made up of the exact opposite sort of teens. Here she finds Knight,
a Cinder she grew up with but lost contact with years ago. And even
though it’s forbidden, she begins to fall for him. Of course, her
North Haven boyfriend’s got a thing or two to say about that. But
Kristine doesn’t care. She’s happier than she’s been in years as
she gets closer and closer to the man she’s falling completely in
love with and having crazy fun with her new roommates.

Chapter Thirty: All I Want

Chapter Thirty-Two: Whatever It Takes

I woke up to an earsplitting
beep, beep,
beep
. I sat up in bed, recognizing the pungent smell of smoke.
Girls all over Room Fifteen—numbered for our age—in The Broken
Ridge Home for Girls sat up in the long row of beds on either side
of me.

“What’s going on?” Samantha asked sleepily
from my left.

“Fire!” I jumped out of bed and ran to the
first of two girls I knew could sleep through almost anything. “Get
everyone out!” I started shaking Rachel, our newest girl and
heaviest sleeper. She was rubbing her eyes groggily.

Someone screamed. I looked in the direction
it had come from and saw Samantha standing in front of the door,
holding her hand. She looked at me and said, “The door’s blazing
hot,” before she pulled her sock off and put it on her hand.

“Wait,” I said. “The fire could be right
outside our room. Tie sheets together and hang them out the
window.” We were on the top floor, but luckily, we were in a
two-story building.

Rachel finally opened her eyes a crack.
“What’re you doing?” She was getting there, but still not awake
enough to understand the seriousness of what was happening.

Even though I was afraid she’d punch me for
it, I grabbed her shoulders and pulled her into sitting position.
“The house is on fire! Get up!” She stared at me as if she might
seriously hit me, but I didn’t give her time. I let her go and
looked four beds over at Tawny, world’s heaviest sleeper number
two. She was stumbling away from her mattress with her eyes nearly
closed.

The window scraped open noisily and I was
immediately hit by the cold October air. “Kristine, the screen!”
Samantha said.

“Rip it out,” I answered. I went to help her
tie the sheets to the cold bars at the end of the bed that had been
dragged to the window. I waited patiently for every girl in the
room to get out before I did, the room filling with smoke the
entire time.

I felt a great deal of relief knowing every
girl in that room was safe. But as I climbed out of the window and
looked in both directions, I realized everyone else was still in
danger. So many precious lives filled that orphanage and no one
else was climbing out of the windows. Hopefully they’d all gotten
out of their rooms okay and were running down the stairs to
safety.

Only a couple of girls were there when my
feet hit the ground. The rest had probably gone around front.

I could already see the flickering light of
fire inside most of the lower level windows to my right. The smoke
alarm on our corner of the building must have gone off later than
the rest.

“Knock on all the windows and throw whatever
you can find at the ones upstairs. Try to get everyone out who’s
still in there,” I said before I ran around front. When I got
there, tall flames were pouring out of windows and washing over the
red bricks, turning them black.

For a minute I simply stared, remembering the
cold winter nights, inadequate meals, and harsh treatment we’d all
endured since the day I’d arrived in that worthless place three
years before. The birthdays and holidays always forgotten. The
nightmares it produced in many of us. It almost felt good to watch
it all ablaze, except for the lives it was putting at risk.

I forced myself to turn my attention to the
crowd of girls gathered out front as I searched their faces for Ms.
Wendy’s. The only adult I saw was her assistant standing in the
middle of several desperate girls who were all asking questions and
crying. So I ran toward her. “Ms. Wendy’s gone for help,” she was
saying. “I don’t know what happened. And there’s nothing I can do.
So calm down and
shut up
!” But the girls’ hysterical
questions continued.

Looking through the terrified faces, I
realized the youngest ones were absent. We had girls as young as
five living there.
Ms. Mary
. She’s the one in charge of five
and six year olds. She was just as cold-hearted as the rest of the
women who took care of us, but at least she would be able to tell
me if they’d gotten out all right. Where’s Ms. Mary?” I screamed,
running around in front of everyone. They acted as if I wasn’t even
there. Ms. Mary was little enough it was hard to spot her. But I
caught a glimpse of her behind a few of the Room Thirteen girls.
“Where’re the little ones?” I asked, running toward her.

“You left them in there?”

Enraged, and not at all surprised by her
neglect, I took off toward the right side of the building. Why did
no one else care?
Could one of the orphanage ladies actually be
hateful enough to have started the fire?
I wondered as I ran to
Room Eight’s window first.

We were taught never to climb out the window
or we would suffer serious consequences. If they were unable to
leave through their door, the girls inside might’ve been too scared
to use the window.

I started pounding my fist on the window
before I got a good look inside. And just as I’d expected, they
were all huddled in the corner beside the window, coughing, crying,
and hugging each other. Flames were moving up the door on the other
side of the room. They all turned to me. “Open the window!” I
shouted. Lucy, the girl nearest me, reached up with shaking hands
and unlocked the window. “You’ve got to get out of there. Come on.”
I reached for her hand and helped Lucy climb out of the window.
“I’ve got to go. Make sure everyone gets out. Don’t leave anyone
behind.”

“Don’t leave us alone,” Lucy called. Even
though my heart hurt at the fear in her voice, I had to keep
going.

I went to the Room Seven window and did the
same thing.

And then Room Six. The flames hadn’t quite
reached them, but dark smoke already filled the air. I instructed
the children to open the window, but only one girl could reach it,
and she couldn’t seem to get the lock undone.

I ran around the side to see if anyone was
out back. The yard was deserted.

So I picked up one of the heavy rocks lining
the outside of our building and raced back to the window. “Stand
back.” I reached back and threw it against the window, shattering
it completely. Then I climbed in and kicked as much glass out of
the way as I could before I helped the girls climb through the
window so they wouldn’t cut themselves.

The smoke hit me the second I stepped in, but
I pulled my shirt up over my nose and kept going.

Room Five was in the center, I remembered,
the worst room in the building because it was the smallest and the
only one without windows. The thought made me sick. But it was
right next to the one I was in. If I could get to them through the
hallway they might be okay.

By the time I got the last Room Six girl out,
I was coughing and feeling a little dizzy. The air was so thick
with smoke. Still, I ran to the door and reached out for it.

It was hot, but I had to get to the smallest
girls. Leaving them to burn wasn’t an option, no matter what it
took to get them out. I yanked a blanket off a bed and wrapped it
around the doorknob so I could turn it. Fire was burning the walls
across the hall from me. It suddenly hit me that the house could
cave in at any moment.

Even though the heat stung and the smoke
burned my eyes and throat, I raced to Room Five and wrapped my hand
around the burning doorknob. Why hadn’t I brought the blanket with
me? No time. My hand burned and blistered. Inside that room I found
nine terrified little girls crouching against the wall beside the
door.

They all screamed when they saw me, and I
opened my mouth to tell them to follow me, but I began to throw up
instead. My throat felt as if it was on fire between the heavy
black smoke and the acid my stomach was now producing.