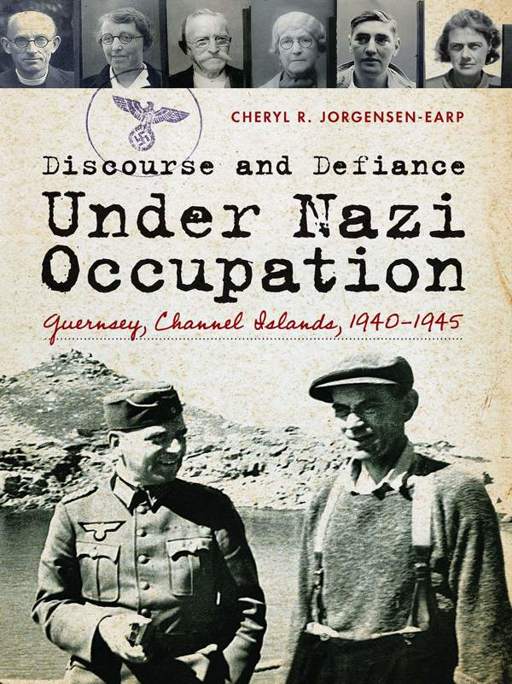 DISCOURSE AND DEFIANCE UNDER NAZI OCCUPATION

Dedicated to the Memory of
Alfred C. “Alf” Williams
1921–2006
Guernseyman and Resister

Chapter 2. The Bedrock of Resistance

B
ECAUSE THE RESEARCH AND WRITING THAT WENT INTO THIS STUDY HAS SPANNED
many years, I have many people and institutions to thank. I would like to start with Richard Heaume, founder and director of the German Occupation Museum in Forest, Guernsey. Richard has been invariably kind and helpful whenever I have descended upon him (often with very short notice). I will always be grateful that he introduced me to Alf Williams in 2003 and invited me on some of the fascinating “rambles” with the Channel Islands Occupation Society. The photographs taken at the German Occupation Museum are presented here with his permission. Recently, Richard was appointed MBE (Member of the Order of the British Empire), a well-deserved honor for a man who has spent his life preserving the history of the Occupation period.

I am very grateful to the Island archivist, Dr. Darryl Ogier, for his expert advice and to Nathan Coyde, Vikki Ellis, Rachel Guilbert, Sarah Lowe, Lawrence West, and the entire team at the Island Archives in Guernsey for their thoughtful guidance through the research, permissions process, and image production for this book. The photographs of the diarists, taken from the identity cards housed at the Island Archives, were produced by the Archives and appear here with permission. In addition to the identity photos and forms for the adult population of Guernsey, the Archives also houses the diaries of Kenneth Lewis, Herbert Williams, Arthur Mauger, and Gertie Corbin among its varied and rich resources. I also want to thank Ms. Amanda Bennett and the staff at the Priaulx Library for their help and for access to a variety of sources including the diaries of the Reverend Robert Douglas Ord, Ambrose Robin, and Elizabeth Doig. I spent many happy hours at both the old and the beautiful new Island Archives, as well as at the Priaulx Library seated at a desk before a particular sunny window. Curators, archivists, and librarians make research possible, and Guernsey is graced with some of the finest.

With so many experts to draw on in Guernsey, I have relied on much helpful advice, such as that provided by Jeremy Marquand of the
Guernsey Press and Star
and Herbert Winterflood. A very special form of expertise was provided by Bill Le Page, Marion Legg, and Maud Smyth, and I thank them so much for filling out questionnaires that allowed me to tap their memories of the Occupation years. Lynchburg College has been very generous with travel grants that have allowed me to complete this research despite the distance involved. I owe a great debt of gratitude to Dr. Martin J. Medhurst, Martha Bates, Annette Tanner, Kristine Blakeslee, Elise Jajuga, Travis Kimbel, Ellen White, and all of those at Michigan State University Press who have shepherded the original manuscript toward publication.

On a personal note, I would like to send my special appreciation to Kevin and Marcia Le Page for their encouragement and support. I would also like to thank Steve and Denise Le Page (and the rest of the Le Page family) for their hospitality and some delightful evenings in Guernsey. I send my special love to my late father and to my mother, so recently parted from me. They were also members of the extraordinary World War II generation, although their experiences during the time were far different from those of the Guernsey Islanders. And my love goes always to my husband, Dar, and son, Ethan, who accompanied me on many research trips and explored all the twists and turns of modern Guernsey. Those days shine brightly in my happiest memories.

T
HE ATTACK CAME, QUITE LITERALLY, FROM THE CLEAR BLUE SKY
. O
N
J
UNE
28, 1940, as German bombs poured down on the Guernsey Harbor, those at some distance were torn between seeking shelter and the need to watch with horrified fascination. The Reverend Robert Douglas Ord, having finished tea with guests in his garden beneath a “perfect blue sky,” stood with the others at the French window overlooking the garden “that we might take together whatever might be our fate.” His spaniel Judy, of a less philosophical and more practical bent, huddled in fear under the stairs.
1

Many in Guernsey just escaped being closer to the action, having been drawn into town to hear the Procureur, Mr. Ambrose Sherwill, speak about the Island's situation now that France (only 40 km distant) had fallen to the Germans. Eighteen-year-old Ken Lewis had gone with his mate Ralph to Smith Street, near the harbor in St. Peter Port, in order to listen to the speech. Returning to Ralph's home in the Steam Mill Lanes after Sherwill's address, they were standing on the lawn with Ralph's father when the German planes came over. Enthralled by minute details of military equipment, an interest he would maintain over the subsequent years, Ken quickly identified the planes as three Dornier 215s flying abreast. While they watched, the center plane suddenly dropped back from formation, exuding small puffs of smoke as they heard the sound of machine-gun fire. Simultaneously, there was the accelerating scream of a bomb, and Ralph's father threw himself to the ground while they heard the “crump” of bombs hitting the harbor Weighbridge. Any spell of being mere observers was broken. The trio ran first to the garage, finding it covered in broken glass. Seeking next a refuge behind a large chair in the house, they finally ended up under the table with Ralph's mother and a neighbor woman “singing hymns and praying” as the house shook and the raid continued.
2

Grower Jack Sauvary had worked hard to pack up thirty-nine baskets of tomatoes for shipment that morning. Tired from the effort, Jack “had a little snooze” and went to St. Peter Port for a haircut, just in case he “slipped off” in one of the boats evacuating Islanders to England. Following the crowd up the High Street to hear Sherwill's address, he stood for a while shooting the breeze with a friend about the pros and cons of remaining in Guernsey. As the crowd surged down the Quay Steps after the speech, Jack managed to outpace them enough to catch the bus to his home in the parish of St. Sampson. He had barely walked through his house to the back door when the attack began, and he ran to put on his Air Raid Precautions “tin hat” and take shelter in the corner of his small office under the bathroom.
3

Jack was lucky in avoiding the more immediate trauma suffered by Mrs. Elizabeth Doig and Winifred Harvey. In her terse diary entry, Elizabeth Doig reported being caught in the Grange, an area just up the hill from the harbor, and taking shelter with twenty others in a house, a thoroughly unforgettable and “nerve racking experience.”
4
Most dramatic of all was the experience of Winifred Harvey. Like so many, she wavered between evacuating to
England and riding out whatever might come in Guernsey. Coming into town on Friday morning, she picked up two embarkation tickets for Tuesday, the Friday tickets having all been handed out. Yet, still she wasn't sure what to do. Listening to Sherwill's speech provided new information; when asked if the planes seen overhead were German, Winnie recorded Sherwill's response in her diary: “‘Yes,’ he said, ‘some of them were, but what of it?’” Sherwill next warned those whose entire income came from England that they might be cut off for a time without resources and thus be a “burden on the island.” That was the deciding argument for Winnie. With a new resolve to leave Tuesday, she tiredly sought a way to get home. The crowds were too great to reach the bus stop up the hill, so she turned back through Smith Street to walk home. In what could serve as a metaphor for things to come, Winnie came upon “a stray wee tortoiseshell kitten, defying some big dogs.” She watched as an old lady walking with her husband picked the kitten up, and the couple followed Winnie up the street. At the sound of three planes overhead, they all looked up, saw puffs of smoke like those described by Ken Lewis, heard a whistle and a loud explosion. “Get under those trees and lie down!” Winnie shouted to the old couple as they raced across the road.
5