Read God Save Texas: A Journey Into the Soul of the Lone Star State Online

God Save Texas: A Journey Into the Soul of the Lone Star State 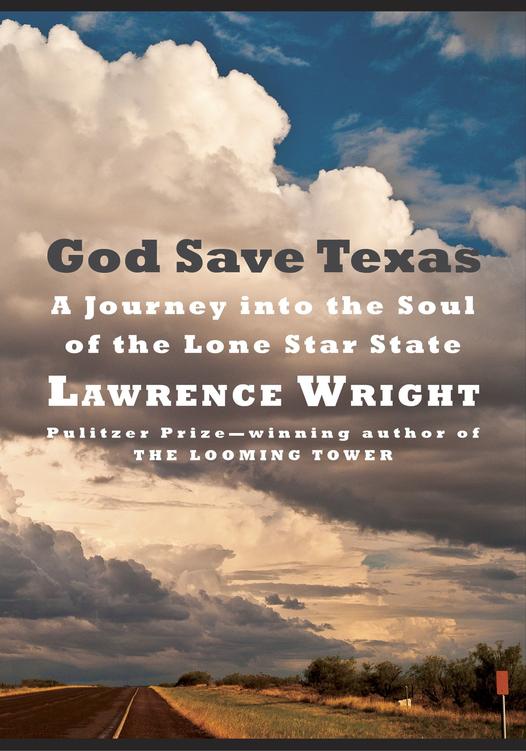 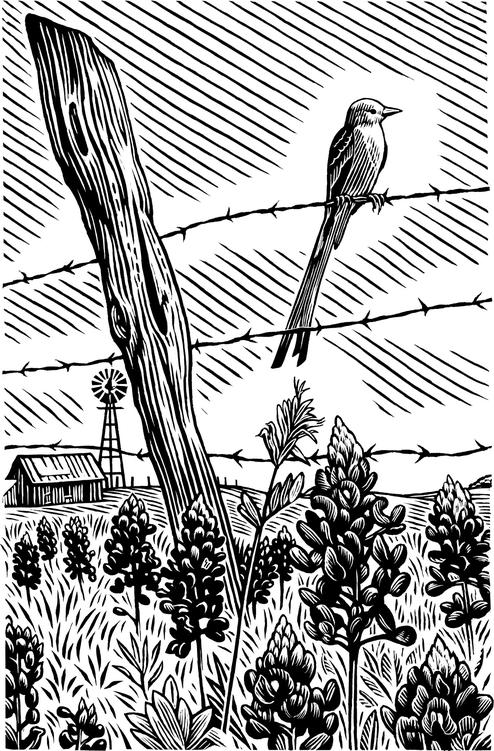 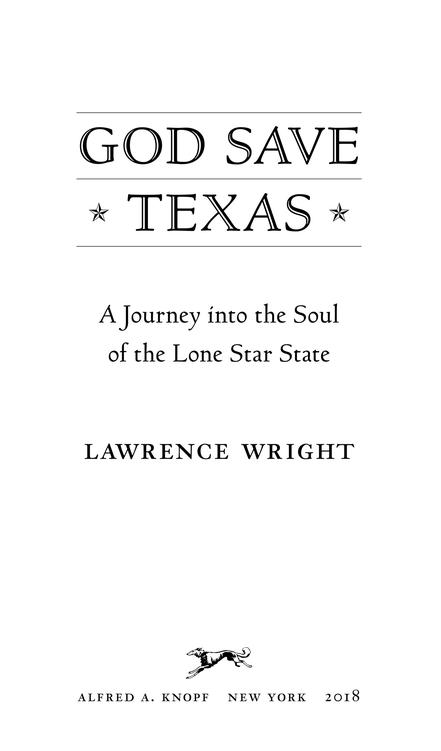 One: The Charms, Such as They Are
Two: A Tale of Three Wells
Three: Houston, We Have a Problem
Four: Culture, Explained
Five: The Cradle of Presidents
Six: Turn the Radio On
Seven: Big D
Eight: Sausage Makers
Nine: The City of the Violet Crown
Ten: More Sausage
Eleven: Borderlands
Twelve: The High Lonesome
Thirteen: Far West, Far Out
Fourteen: Among the Confederates
Acknowledgments

For Steve,
who was there at the beginning
and will be at journey’s end
We’re oilmen and philosophers
Astronauts and ranchers
Fishermen and roughnecks
And college professors.
We’re carpenters and preachers
And artists and physicians
High-tech geeks
And redneck musicians.
We’re Church of Christ and Baptist
(Evangelical and Southern).
We’re straight and gay and what the hey
We come in every color.
We’re Czech and Greek and Mexican,
Vietnamese and Cajun
We sprawl a quarter million miles
We have no common language.
God save Texas
From the well-intentioned masses!
God save Texas
From the posers and jackasses!
God save Texas
He’s the only one who can!
—unpublished song by Marcia Ball and Lawrence Wright
ONE
The Charms, Such as They Are 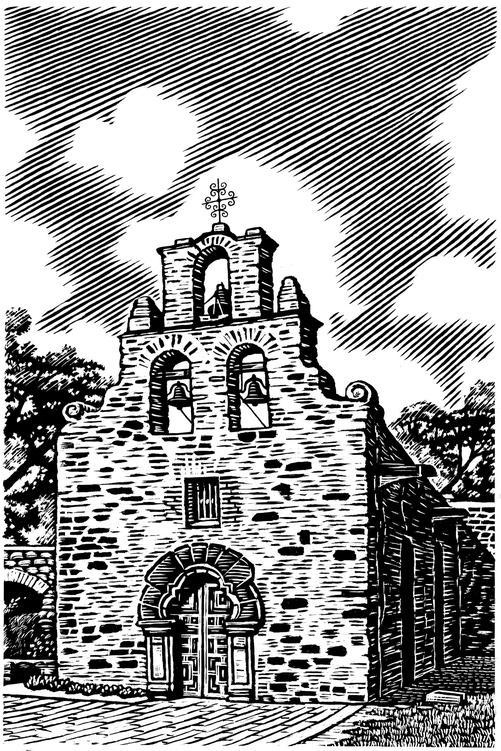 S
ubtle was the word my friend Steve used as we drove through a spongy drizzle from Austin to San Antonio on a mild February morning. He was referencing the quality of the pleasures one might experience from observing the Texas landscape—small ones, requiring discernment—although the actual vista in front of us was an unending strip mall hugging a crowded interstate highway. Subtlety is a quality rarely invoked for anything to do with Texas, so I chewed on that notion for a bit.
There are some landscapes that are perfect for walking, disclosing themselves so intimately that one must dawdle to take them in; some that are best appreciated in an automobile at a reasonable rate of speed; and others that should be flown over as rapidly as possible. Much of Texas I place in this last category. Even Steve admits that Texas is where “everything peters out”—the South, the Great Plains, Mexico, the Mountain West—all dribbling to an anticlimactic end, stripped of whatever glory they manifest elsewhere. But in the heart of Texas there is another landscape that responds best to the cyclist, who lumbers along at roughly the rate of a cantering horse, past the wildflowers and mockingbird trills of the Hill Country. Our bikes were in the back of my truck. We were going to explore the five Spanish missions along the San Antonio River, which have recently been named a World Heritage Site.

Steve is Stephen Harrigan, my closest friend for many years, a distinguished novelist who is now writing a history of Texas. We stopped at a Buc-ee’s outside New Braunfels to pick up some Gatorade for the ride. It is the largest convenience store in the world—a category of achievement that only Texas would aspire to. It might very well be the largest gas station as well, with 120 fuel pumps, to complement the 83 toilets that on at least one occasion garnered the prize of Best Restroom in America. The billboards say The Top Two Reasons to Stop at Buc-ee’s: Number 1 and Number 2, and also Restrooms You Have to Pee to Believe.

But gas and urination are not the distinguishing attractions at Buc-ee’s. Texas is—or at least the kind of material goods that reify Texas in the minds of much of the world: massive belt buckles, barbecue, country music, Kevlar snake boots, rope signs (a length of rope twisted into a word—e.g., “Howdy”—and pasted over a painting of a Texas flag), holsters (although no actual guns), T-shirts (Have a Willie Nice Day), bumper stickers (Don’t Mess with Texas), anything shaped like the state, and books of the sort classified as Texana. There is usually a stack of Steve’s bestselling novel
The Gates of the Alamo
as well.

One image on the T-shirts and bumper stickers and whiskey jiggers has become especially popular lately: that of a black cannon over the legend Come and Take It. The taunt has a long history, going back to the Battle of Thermopylae, when Leonidas I, king of Sparta, responded to the demand of the Persian leader, Xerxes, that the Greeks lay down their arms. In Texas, the reference is to a battle in 1835, the opening skirmish of the Texas Revolution, when Mexican forces marched on the South Texas outpost of Gonzales to repossess a small bronze cannon that had been lent to the town for defense against Indians. The defiant citizens raised a crude flag, made from a wedding dress, that has now become an emblem of the gun rights movement. Ted Cruz wore a “Come and Take It” lapel pin on the floor of the U.S. Senate when he filibustered the health care bill in 2013.

At Buc-ee’s, an aspiring Texan can get fully outfitted not only with the clothing but also with the cultural and philosophical stances that embody the Texas stereotypes—cowboy individualism, a kind of wary friendliness, superpatriotism combined with defiance of all government authority, a hair-trigger sense of grievance, nostalgia for an ersatz past that is largely an artifact of Hollywood—a lowbrow society, in other words, that finds its fullest expression in a truck stop on the interstate.

I’ve lived in Texas most of my life, and I’ve come to appreciate what the state symbolizes, both to people who live here and to those who view it from afar. Texans see themselves as confident, hardworking, and neurosis-free—a distillation of the best qualities of America. Outsiders view Texas as the national id, a place where rambunctious and disavowed impulses run wild. Texans, they believe, mindlessly celebrate individualism, and view government as a kind of kryptonite that saps the entrepreneurial muscles. We’re reputed to be braggarts; careless with money and our personal lives; a little gullible but dangerous if crossed; insecure but obsessed with power and prestige. Indeed, it’s an irony that the figure who most embodies the values people associate with the state is a narcissistic Manhattan billionaire now sitting in the Oval Office.

Obviously, those same qualities also have wide appeal. Texas has been growing at a stupefying rate for decades. The only state with more residents is California, but the number of Texans is projected to double by 2050, to 54.4 million, almost as many people as California and New York combined. Three Texas cities—Houston, Dallas, and San Antonio—are already among the top ten most populous cities in the United States. The eleventh largest is Austin, the capital, where Steve and I live. For the past five years it has been one of the fastest-growing large cities in America, the metropolitan area surpassing two million people, dwarfing the little college town Steve and I fell for many years ago.

There’s an element of performance involved with being “Texan.” The boots, the pickup trucks, the guns, the attitude—they’re all part of the stereotype, but they’re also a masquerade. Stylistic choices such as the way Texans dress or the vehicles they choose to drive enforce a sense of identity, but they also add to the alienation that non-Texans often feel about the state.

Riding on top of the old stereotypes are new ones—hipsters, computer gurus, musicians, video-game tycoons, and a widening artistic class that has reshaped the state’s image and the way we think of ourselves. That Texas can’t be captured on a coffee mug or a bumper sticker. “I’m the least Texas person I know,” Steve once observed. I’ve never seen him in cowboy regalia, or even a pair of jeans. He hasn’t owned a pair of boots since he was six years old. In college, he took horseback riding as a physical education requirement and got an F. He contends that must have been a clerical error, but the last time he was on a horse he fell off and broke his arm.

Neither Steve nor I could have lasted in Texas if it were the same place we grew up in, but we’re so powerfully imprinted by the culture it’s impossible to shake it off. Still, both of us have considered leaving and often wondered why we stayed. Many times I’ve considered moving to New York, where most of my colleagues live, or Washington, which is Lotus Land for political journalists. I’ve never felt at home in either spot. Washington is a one-industry town, and although writers have influence, they are basically in the grandstands watching the action. New York intellectuals sometimes put me off, with their liberal certitudes, their ready judgment of anyone who differs with them. The city is a pulsing hive of righteous indignation. In any case, I think I’m too much of a rustic to survive there. Once, when I was walking up Sixth Avenue in Manhattan, I saw a nicely dressed older man standing in the street beside the curb. He was turning around in small, distracted circles. All my prejudices against the city came up: here was a man in need, but people were walking by, evidently uncaring. In Texas, we wouldn’t let a confused old man place himself in danger. I approached him as any gallant Texan would and said, “Sir, are you okay?”

He looked at me in puzzlement. “I’m waiting for a cab,” he said.