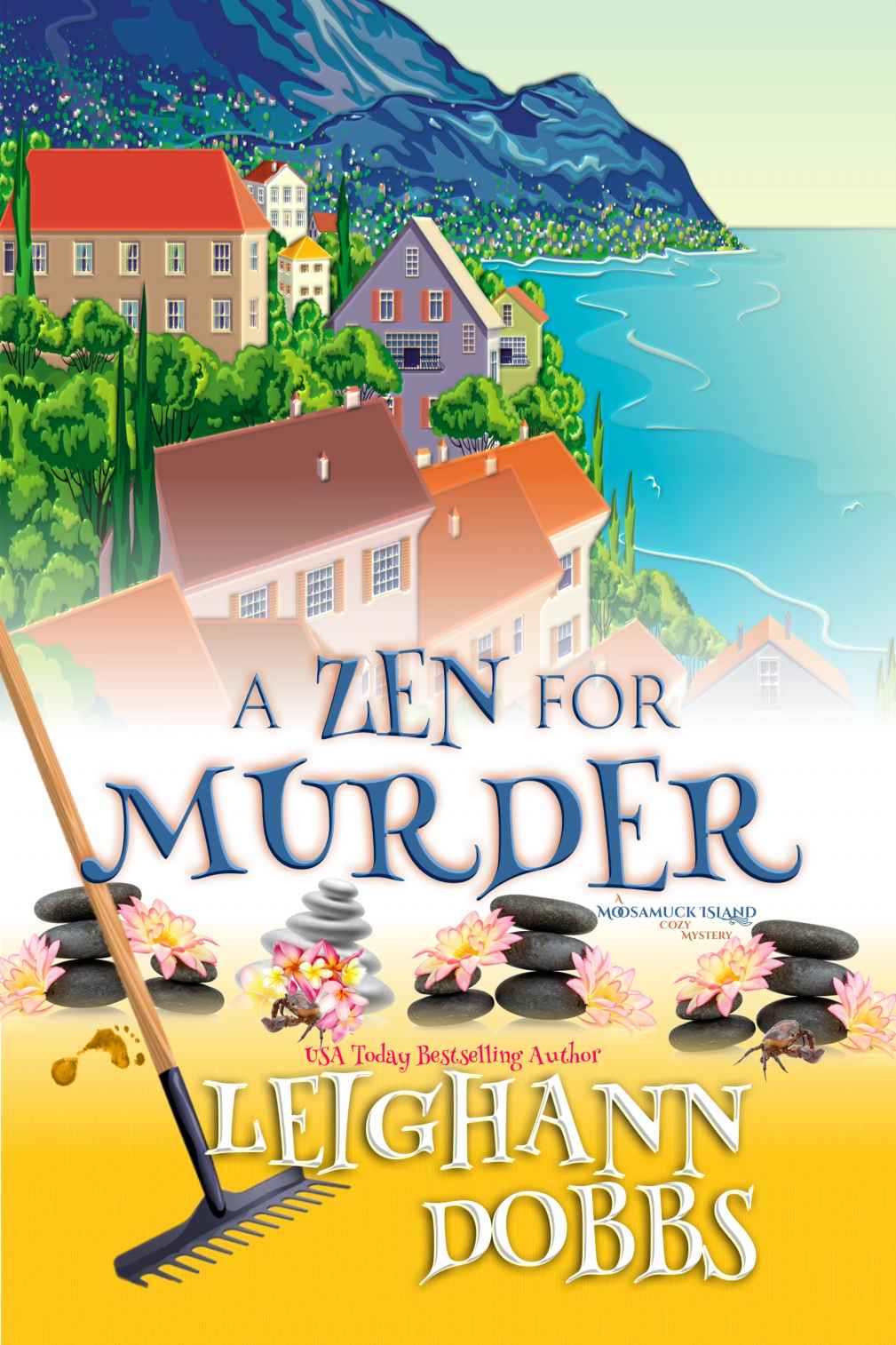 A Note From The Author

This is a work of fiction.

A Zen For Murder

No part of this work may be used or reproduced in any manner, except as allowable under “fair use,” without the express written permission of the author.

Claire Watkins tossed a dead rose stem from her spacious garden into the small wheelbarrow just as the sun made its appearance, splashing the blue Atlantic Ocean with a wash of pink.

Sunrise was her favorite time of day. It was quiet. Peaceful. To her, the hours before her little town of Crab Cove on Mooseamuck Island, Maine, woke up and the hubbub of tourist and local activity started were the most precious hours of the day.

Stretching, she winced at the slight pull in the muscles in her lower back and the popping sounds that crackled from her spine. Even so, Claire felt grateful that she enjoyed relatively good health for her seventy years, which she attributed to the strict natural health regimen she'd adopted in the past decade.

She'd never tire of looking at the panoramic view from her stone cottage, perched three-quarters of the way up Israel Head Hill on the small island off the coast of Maine. She'd grown up in this house and returned in later years to tend to her ailing father. Now, she lived here alone. Which suited her just fine.

Sucking in a deep breath of salty sea air, her gaze drifted from the ocean that stretched in front of her to the cove below, with its picturesque fishing boats on her left. Claire couldn't imagine living anywhere else.

She closed her eyes, letting her breath out slowly as she enjoyed the early morning island sounds.

The happy chirping of chickadees, wrens and nuthatches in her garden.

The familiar cry of gulls in the distance.

The soothing sound of the surf lapping at the shore.

The angry yelling and cursing coming from the road below.

That wasn't a normal, early morning sound on the island. She cocked her head, honing in on the direction of the noise. It sounded like it was coming from the scenic vista that overlooked the cove. She hurried to the patio in the corner of her yard that looked down on the vista.

Claire's father had installed the patio years ago in order to make the most use of the yard and its views. The property fell away drastically at the edge of the patio, so they'd put up a heavy-duty railing for safety. Claire could just barely see the road from her vantage point. She leaned precariously over the railing, the cliff falling away below her. Her brows rose when she saw who was causing the ruckus.

Norma Hopper, the island's resident artist, had setup her paint-splotched, wooden easel in her usual spot. For as long as Claire could remember, Norma had started the day at that very spot, where she painted the island sun-rises that she was famous for and which sold to tourists like hotcakes in the summer.

But today, her canvas was blank. Instead of painting, she was engaged in a heated argument with Zoila Rivers. The two women were squared off, facing each other, Norma with her hands on her hips, Zoila waving a piece of paper in Norma's face.

Snatches of angry words drifted up and, although Claire couldn't make out exactly what the words were, she could tell something serious was going on.

Norma stood rigid, the immense brim of her straw hat, which Claire had always suspected she wore more to keep people out of her space than to ward off the sun, stuck out like a quivering awning.

Zoila, in contrast, was a whirl of energy, shuffling her feet and waving her arms. Claire didn't know Zoila very well. The psychic had come to the island just over a year ago and, while some people didn't believe in her abilities, Claire had thought she was well-liked.

It wasn't unusual to see Norma acting angry. She was naturally abrasive, but everyone liked and respected her. Despite the artist's gruff demeanor, Claire had fond memories of Norma, who she'd known since she was a little girl growing up on the island. When Claire had returned a few years ago, she'd rekindled that friendship as an adult.

Claire knew Norma's usual, angry facade, though, and this wasn't it. Not only that, but Claire's training as a criminal psychologist made her an expert in body language … and the body language of these two women told Claire this was no trifling matter.

As far as she knew, though, Zoila Rivers and Norma Hopper were only passing acquaintances. She couldn't imagine what could possibly cause them to argue so vehemently.

Claire pushed back from the railing and pulled her sweater tight around her to ward off the late spring chill that seemed to suddenly permeate the air. Then, she put her pruning shears away and rushed into the house. She'd better hurry and get ready for what the day may bring. Her intuition told her something unusual was afoot on Mooseamuck Island.

Further up Israel Head Hill, Dominic Benedetti sat on the patio of his condo, his great, bushy eyebrows drawn together in a disapproving 'V' as he regarded the cannoli on the plate in front of him. It wasn't the confection, so much, that drew his objection but the uneven placement of the tiny, chocolate-chip garnishments. Five on one side and six on the other.

Does no one take pride in their work anymore?
he wondered as he picked it up and took a small bite.

The creamy pastry coated his tongue and he nodded. Almost as good as his Nonna made.

Almost, but not quite.

Nothing was quite as good as it had been in his youth, especially not the home-made Italian food he'd enjoyed or the culture of his close Italian neighborhood in the north end of Boston.

But then, one couldn't expect things to stay the same forever.

He sighed, his heart twisting as he looked past the French doors into the living room where the picture of Sophia, his late wife, sat in its sterling silver frame. They'd shared forty-five years and two children together, and though cancer had taken her from him almost two years ago, the loss still felt fresh and raw—like a big hole had been cut right out of him.

He wrenched his eyes from the picture and looked back down at the cannoli, his appetite fading as his memory rehashed those last few weeks with Sophia.

She'd made him promise to live a good long life. He'd agreed because it seemed to give her peace. But the truth was he didn't want to live a good long life—not without her. In the end, though, he'd tried to honor that wish. Which was why he'd come to Crab Cove—a place where they'd spent many happy vacations with their children. The kids were grown now and Sophia was gone, but Dom still loved the quaint New England island.

Living on the island had taken some of the sting from his loss and he had to admit he
had
started to enjoy himself a little. He'd even indulged himself in a few things Sophia wouldn't have approved of—like eating dessert for breakfast.

He sighed and bit into the cannoli again. When Sophia's death had dulled his zest for life, he'd retired from his investigative consulting practice to come up north and lick his wounds. Adjusting to his new life hadn't been easy and he had to admit, now that time had dulled some of the pain, he was getting a little bored.

He listened to his parakeets, Romeo and Juliet, chirp away inside the condo while he finished off the pastry. He had been lonely at first, but the birds helped keep him company and the other residents of Crab Cove had made him feel right at home.

Dom allowed himself a thin smile as he mused about his newfound celebrity status on the island. Apparently, they didn't get many folks who had 'made the papers' up here, and Dom had made them plenty as a consulting detective on high profile cases down in Massachusetts.

But that was in his old life. Now, he had to amuse himself by finding runaway cats and lost sets of keys. Still, he did have a spectacular view from his condo, high atop the hill. One could have a much worse retirement.

He carefully wiped the crumbs from his lips and glanced to the east, over the vast Atlantic, to where the sun kissed the very edge of the ocean.

Time to start the day.

Dom was just about to rise out of his chair when a movement further down the hill caught his eye.

It wasn't unusual that she'd be out in her garden at this time of day, but what she was doing out there
was
unusual. Quite unusual, indeed.

His eyes narrowed as he watched her lean over the railing. Clearly, she was straining to see something below. Dom wished her stone cottage was not blocking the view, because judging by the way she was positioning herself precariously over the railing, he could tell it must be something of the utmost interest.

Dom's eyebrows started to tingle with electricity—a feeling he recognized well and one he hadn't felt in a long time. For most of his adult life, his bushy eyebrows had been overly sensitive. He knew from experience that this sort of tingle meant something big was about to happen. As an investigator, they'd been a valuable asset—and to think his daughter had wanted him to trim them when he retired!

He watched with interest as Claire pushed off from the railing and hurried inside her cottage.

Then he, too, hurried inside, a spring in his step.

He carefully cleaned off his plate and dried it, putting it away on top of the stack of same-sized plates and patting the edges to make sure they were aligned perfectly. Romeo and Juliet twittered and peeped. He stopped in front of their cage on his way to the bedroom and the two birds became quiet.

Romeo fluffed up his green and yellow feathers and sidestepped along the perch toward Dom. Juliet remained in the corner, preening her white and aqua tail.

The birds’ normal chattering was mostly gibberish, but every so often, Romeo surprised Dom by uttering an almost perceptible word in his high-pitched parakeet voice. Romeo looked sideways at Dom with one of his bright, black eyes and squalked,“Zoorious.”

“Indeed, my little friend,” Dom said as he clipped a millet spray to the side of the cage. “It certainly is
very
curious.”

Chowders Diner
was a Crab Cove mainstay and a favorite of the locals. Tucked away on a side-street, it was not often found by tourists, which was fine with the island residents. It had the best food in town and they preferred to keep it to themselves.

The diner had been around since the 1930s. Originally run by prominent Mooseamuck Island resident Josiah Chase, it had been recently purchased by a newcomer—Sarah White. Claire had taken an immediate liking to Sarah, who she figured to be in her early thirties. Sarah was a pretty blonde, a bit too serious for her young age. Claire could tell that serious demeanor was caused by a dark secret.

Nixon's Secret by Roger Stone
Soul Mate (The Mating Series) by Swan, S.
The Sleepwalkers by Hermann Broch
Conan and the Shaman's Curse by Sean A. Moore
Eye of the Labyrinth by Jennifer Fallon
Hellboy, Vol. 2: The All-Seeing Eye by Mark Morris
The Witch and the Huntsman by J.R. Rain, Rod Kierkegaard Jr
Engaging the Enemy by Heather Boyd
Biker Bound: The Lost Souls MC Series by Ellie R Hunter
The Trojan Sea by Richard Herman