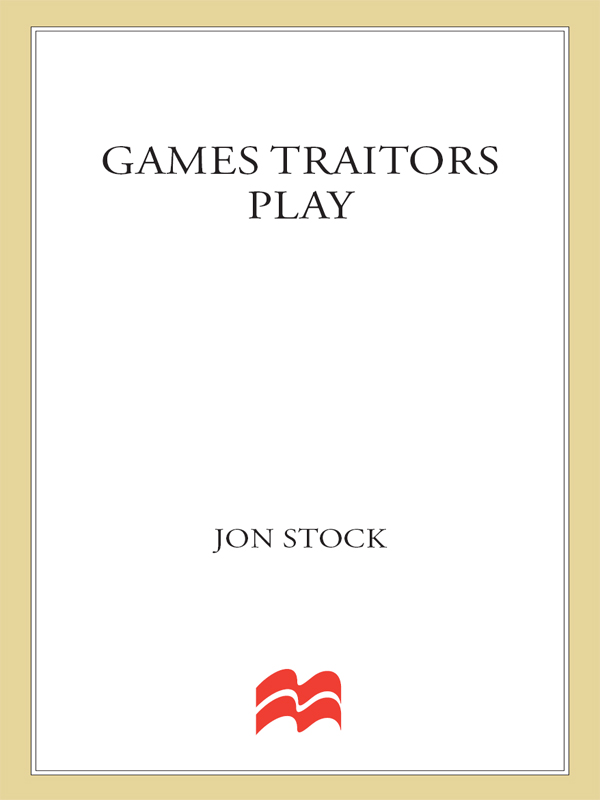 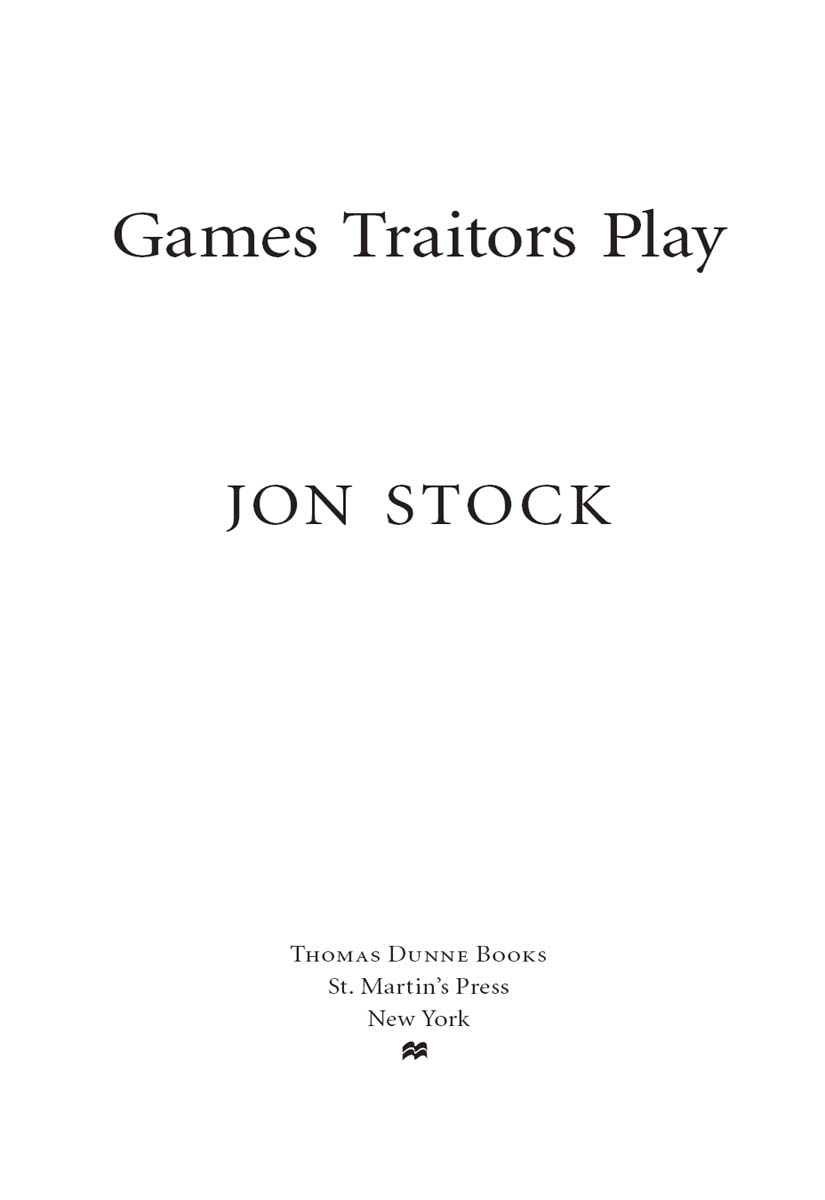 In memory of
my father Peter Stock

âFor while the treason I detest, the traitor still I love'

A hot afternoon in Marrakech, and the square was already full of people and promise. If the storyteller was aware of the crowd around him, he didn't show it. The old man sipped at his sweet mint tea and sat down on a plastic chair, first brushing something off it with his empty hand. Had he looked up, he would have seen men and women surge across the square like iron filings, drawn by the magnetism of his act. But he never raised his head, not until he was ready to begin his tale.

Daniel Marchant wondered if he prayed in these moments, or was just running a mental finger over the bookshelves, choosing his narrative. He had been watching this particular storyteller â or
halaka
â for a week now, convinced that he held the answer to a question that had occupied every waking hour and all of his dreams since he had arrived in Morocco three months earlier.

From his vantage point on the rooftop terrace of the CafÃ© Argana, Marchant was able to watch the half-dozen
halakas
who worked the northern end of DjemaÃ¢ el Fna square. None of the others drew a crowd like this one, with his cobalt-blue turban, untidy teeth and cheap pebble glasses that magnified his eyes. Locals came for the stories, tourists for the photos, unable to understand a word but swept along by the drama.

This
halaka
could tell a thousand and one different tales of dervishes and djinns, each one recounted as if, like Queen Scheherazade, his own life depended on it. Marchant had learned that storytelling had been in his Berber family for centuries, passed down from father to son. In his hands, the tradition was safe, despite the rival temptations of Egyptian television soap operas. And he knew just when to pause, leaving his story on a knife edge. Only when the money bowl had been passed around would he continue.

On a good day, he was even more of a draw than the Gnaoua musicians from the Sahara who somersaulted and swirled their way through the crowds down by the smoky food stalls. When he was talking, the square's snake charmers rested their cobras, fire-eaters paused for breath, even the travelling dentists put down their dentures and tools.

Marchant sat up in his chair, sensing that the time had almost come. He wasn't sure how the
halaka
judged when the crowd had reached critical mass. The man was a natural showman, milking the moment every afternoon when he finally lifted his sunbeaten face and surveyed his audience with a defiant stare. Marchant reached for his camera, focusing the lens on the top of the man's turban. The storyteller's head was still bent forward, concealing his face.

The lens was not the sort that could be bought in a camera shop, but anyone watching Marchant would not have suspected that it was many times more powerful than its innocuous length suggested. He appeared like just another tourist as he slid it through the ornate metal latticework of the restaurant railing and observed the scene below him. Except that a tourist might have taken a few photos, particularly when the
halaka
finally looked up to address his expectant crowd. But Marchant forgot he was watching through a camera, forgot his cover. He could see that the man in his lens was frightened.

Marchant had come to know the
halaka
's assured mannerisms, the tricks of his trade. The street wisdom of yesterday had vanished, his stage presence replaced by fear. He should have been staring ahead, hypnotising his audience with a narrator's spell, but instead the man's eyes flitted to the back of the crowd, as if he were searching for someone. Pulling on the hem of his grey
djellaba,
the local head-to-toe garment, he rocked on his battered
baboush
slippers, shifting his weight from heel to toe. For perhaps the first time in his life, the storyteller appeared lost for words.

Marchant checked with his own eyes, as if the camera might be lying, and then looked again through the lens. He took some photos, cursing himself for his slackness, and scanned the back of the crowd. The man was here somewhere, he was sure of it, waiting to hear the
halaka
's coded phrases that would send him off into the snow-tipped Atlas Mountains to the south of the city. And Marchant would follow, wherever the man went, however remote, knowing who the message was for.

For several weeks, Marchant had been convinced that someone was planning to make contact with Salim Dhar through the storytellers of Marrakech. He had overheard something in the souks, a fleeting remark in amongst the chatter. Using the
halakas
was a primitive form of communication for the world's most wanted terrorist, but that was the point. Echelon, the West's intelligence-analysis network, was in meltdown, monitoring every email, phone call, text and Twitter for the faintest trace of Dhar. It had been ever since he had tried to assassinate the US President in Delhi the previous year. Every time the analysts at Fort Meade in Maryland thought they had found him, the information was relayed to the CIA's headquarters in Langley. Its drone strikes in Af-Pak, where most of the sightings were reported, were now running at thirty a month.

But Dhar was still free, on the run. And Marchant was certain that no amount of software would ever find him. Dhar was shunning technology, keeping one step ahead of the modern world by retreating into the old. Ancient oral traditions, such as the
halakas
, were beyond the range of the spy planes and stealth satellites that orbited the globe in ever more desperate circles.

It had worked for fugitives before. During the 1970s, when General Oufkir was Morocco's hardline interior minister, the
halakas
used code words to refer to him and alert the public to planned raids by his secret police. Snakes were more than serpents sliding through the narrative: they were warnings of time and place. It was a way of communicating without suspicion. Information could be passed anonymously, without one-to-one meetings: textbook tradecraft. And now the
halaka
was about to issue another message.

Marchant pushed his tea away, folded some
dirhams
under the silver pot, and went to the stairwell. He knew he didn't have long.

Down in the square, a man approached him from a narrow alley to one side of the cafÃ©.

âHashish? You want some hashish?'

Marchant managed a smile. His student cover must have been convincing. Officially, he was in Morocco for a PhD on Berber culture, and took his studies very seriously. His dirt-blond hair was cut short, and he was wearing a woollen
djellaba
.

âThanks, no,' he said, walking on towards the crowd.

Marchant ignored him and walked on. He could do without the attention. The tout was not giving up, though, trotting along beside him, pouring out a list of random words that he must have gleaned over the years, like a magpie, from visiting tourists.

But the tout was losing interest. He peeled away, calling half-heartedly after Marchant, âM&S? A303?'

Marchant had almost joined the crowd now. He didn't want any trouble in future from this man, so he raised a hand in a friendly farewell, his back to him.

âTerrorist,' the tout said, loud enough for one or two people at the edge of the crowd to turn around. Marchant had been called a few things in Marrakech, but this was a first. The choice of that term of abuse was nothing more than an unfortunate coincidence, he told himself, but he scanned the square again. Most of the sellers had got to know him in the past few months, letting the diligent British student practise his Berber on them. This tout was new to the area. Marchant threw him another glance. He was now leading two female tourists into the medina, looking at their map. Was it a CIA cover? Did someone else share his suspicions of the
halaka
?

The Americans had kept an eye on Marchant when he had first arrived in Marrakech, but they had soon lost interest, believing that the British agent was barking up the wrong tree. Langley was sure that Salim Dhar wasn't in North Africa, but had headed north after attempting to assassinate the President, smuggling himself across the Kashmir border in a goods lorry. The trail had gone cold in Pakistan, as it so often did, and they assumed he was now in hiding on the north-west border with Afghanistan, along with many of America's other most wanteds.

Marchant joined the back of the crowd and listened, watching the people around him. They had already fallen under the spell of the
halaka
, who had regained his composure. As he listened to the story of Sindbad the sailor, Marchant wished his Berber was better. He was back lying on the floor of his childhood home in the Cotswolds. A recording of Sindbad was the first vinyl album his father had ever bought him. For weeks after playing it on the big old wooden-cased HMV player, Marchant had had nightmares about the Roc bird, terrified that the skies would darken with its enormous wings.

The
halaka
had paused. Marchant watched him closely, the droplets of sweat beading his brow. He had caught the eye of someone near the back of the crowd, holding his gaze for barely a second. Marchant had clocked the man earlier, a Berber, early twenties, calico skullcap. Marchant waited for the
halaka
to begin speaking again â of giant serpents and the Roc bird â and then glanced back at the man. But he was already gone, walking briskly across the square, trying not to break into a run.

The Secret Sharer and Other Stories by Joseph Conrad
Spades: The True Wonderland Awaits. (Of Wonderland Chronicles Book 1) by A.G. Stone
La profecía 2013 by Francesc Miralles
Dave Barry's Only Travel Guide You'll Ever Need by Dave Barry
War Raven: Barbarian of Rome Chronicles Volume One by Nick Morris
And Never See Her Again by Patricia Springer
Love in the Falls by Rachel Hanna
(1995) By Any Name by Katherine John
One Imperfect Christmas by Myra Johnson
Secrets of You by Mary Campisi