Read From This Day Forward Online

From This Day Forward 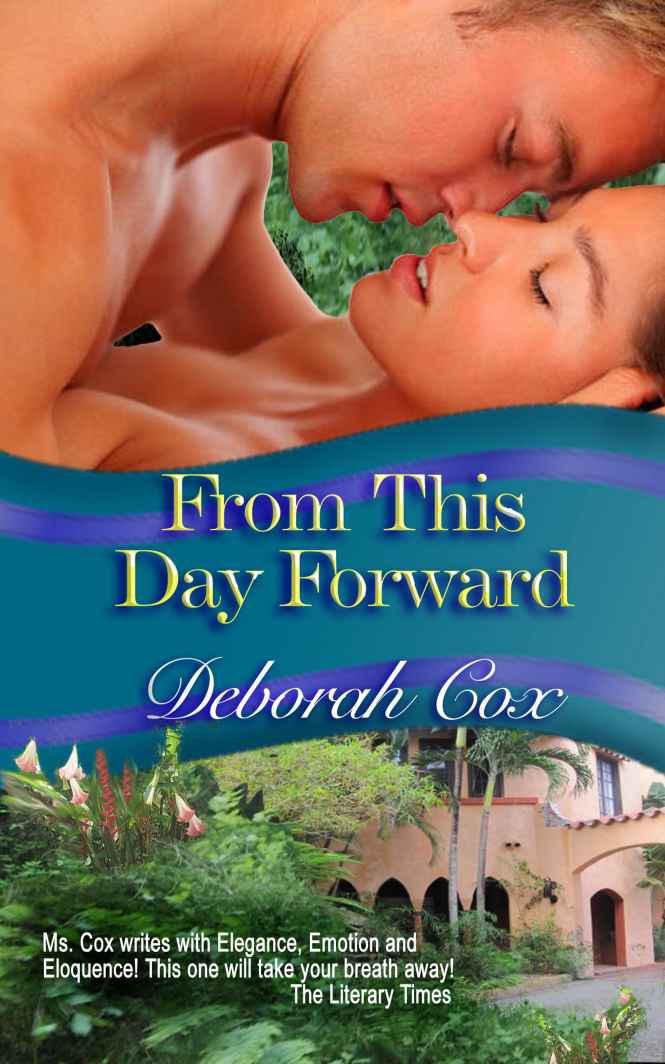 From This
D
ay Forward

This is a work of fiction. Any resemblance to actual events, locales, or persons, living or dead, is entirely coincidental.

No part of this e-book may be reproduced in any form other than that in which in was purchased and without the written permission of the author. This e-book is licensed for your personal enjoyment only. Thank you for respecting the hard work of the author.

For my critique partners—Lorraine Carroll,
Mallory Kane, and Sherrilyn Kenyon
. Thanks for putting up with me!

I am pleased to inform you that I have located a suitable candidate to fulfill
the
position of wife and companion. Her name is Caroline Marshall. I am well acquainted with
the
lady and can say without hesitation that she meets
the
requirements you set forth in your letter. I am confident you will find her pleasing to
the
eye and an intelligent companion.

I am most gratified with your decision to marry. I have sensed a growing loneliness in your recent letters. Melanie and I believe you have made a splendid decision.

The
refore,
the
marriage by proxy has been performed and preparations are underway for your bride's departure for Brazil. I will write again when passage has been arranged.

I wish you both happiness and good fortune.

"It's done." Caroline Marshall Sinclair placed the quill in the inkstand and stared at the letter on the desk before her. Quelling the doubt that rose in her breast, she reread the missive. "Tell me I've done the right thing."

Melanie Sinclair lifted the letter carefully, studying it for several seconds before replying. "It's amazing. I've seen Derek's handwriting hundreds of times, but I could never have duplicated it so closely."

"Well, I suppose if this doesn't work out I could make my way as a forger."

Melanie laughed and returned the letter to the desk. "I've never known you to be fainthearted, Caroline. You were so sure this morning."

Sunlight from the open window glinted off the ring on the third finger of Caroline's left hand, reminding her of the vows she'd taken today, vows that tied her forever to a stranger.

"Have you ever met Jason?' she asked, though she knew the answer. She'd asked the question more than once and had received a different reaction each time. The words were always the same – "No, but Derek has told me so much about him I feel I know him." The difference lay in the expressions, the physical reaction which ranged from dreamy contemplation to cautious optimism.

"No, silly, I've told you before." Melanie smiled, then her mood turned pensive. "All I know of him is what Derek has said over the years and what I've gleaned from –"

Surprised by the variation in Melanie's response, Caroline stopped studying the wedding band on her finger and glanced up at the other woman who stood gazing out the window at the traffic on Tchoupitoulas Street. "What? Gleaned from what?"

"Oh," Melanie murmured as if she'd been called back from some faraway place. "Oh, the requests he's made over the years. Jason has very definite ideas about what he wants – the exact kind of books, the exact kind of furnishings, the exact type of fixtures and glass and door facings for what must be a giant of a horse."

A tremor of fear rippled through Caroline's body. Yes, Jason Sinclair had been very specific about what he wanted in a wife. But she knew that what he thought he wanted and what he needed were not the same thing at all. He needed a strong, independent, intelligent woman who wouldn't mind the isolation of the jungle or the hardships of such a life. He needed a woman who understood him, who could offer him the loving kindness he had never known as a child.

"Derek says Jason was scarred by life," Melanie said, as if she'd read Caroline's thoughts. "That's why he's hidden himself away in the wilds of Brazil for all these years. They were never close, not really. Jason grew up in a different world, a world of poverty. They lived on opposite sides of town. When his father died, Jason came to work for the company. He was only seventeen when his mother died and he left Brazil. Fifteen years in the jungle."

Fifteen years,
Caroline
thought with a shudder, trying to imagine it. What would a man be like after fifteen years in the wild? She remembered reading accounts of men who had lived among the Indians of the American West twenty or thirty years ago and had become savages themselves. It seemed as if there was something primitive inside men, and whenever they were separated from civilization for too long, they reverted to a baser nature.

She was generalizing; she knew it. She could almost hear her father scolding her even from the grave. There were plenty of other accounts of men who had gone into the wilderness and tamed it, and that wa
s obviously what Jason Sinclair
had done. He had built a house, ordered books and other comforts from home, and now he wanted a wife. His letters had revealed a fiercely independent spirit, a dependable hardworking man with the soul of a poet.

In short, Jason Sinclair was the absolute opposite of Wade Marshall, her first husband. He'd allowed life to rule his world, whereas Jason Sinclair obviously ruled life. Jason had decided on a course, set a goal, and accomplished it. The obstacles he must have overcome would have crushed Wade.

All Jason needed was the right woman to bring him out of his shell of loneliness and self-imposed isolation. And Caroline knew that she was that woman.

Guilt squeezed her chest. The candid descriptions in Jason's letters of his childhood had been intended for Derek. But until she'd begun writing Derek's responses, Jason's letters had been dry and businesslike, without a hint of intimacy. It was as if something in her words had prompted him to confide in her – in Derek.

"Please don't let me upset you with my rambling," Melanie said, trying to sound lighthearted. "I suppose now is not the time to be telling you these things. I'm sure it's nothing to be alarmed about. I think it's terribly romantic. Falling in love through letters…"

Unsure which of them Melanie was trying to convince, Caroline tried to focus on other things. Thinking back over the past year, she couldn't say exactly when she'd fallen in love with Jason. His letters had spoken to her heart from the first one her employer, Derek Sinclair, had given her to read and answer.

At first, Derek had approved each response before she'd posted it, but as time passed and her skills in copying his handwriting increased, Derek's scrutiny had become less and less thorough. Eventually, Caroline became Derek's voice with his cousin. When the letter came from Jason requesting a wife, Derek was out of the country. Acting on Derek's behalf, and
without
his knowledge, she'd chosen the one woman who understood Jason better than anyone else – herself.

How well she understood the desire to shed the past and start over in a new place. Because she refused to live by the standards imposed upon women in New Orleans society, she'd been ostracized. She chose not to hide the fact that she was capable of using her mind for something other than picking the right color draperies for the sitting room. As a result, men looked at her with suspicion, as if she were a freak of nature.

Women distrusted her because she enjoyed the world of business, a world she shared with their husbands, a world entirely closed to them. Both men and women disliked her because she threatened the status quo. She'd been unwilling to compromise, to lower her standards in order to fit their mold, and so she'd been treated like a pariah.

Only Melanie had befriended her, and she'd repaid her kindness by entangling her in this desperate plot.

"I just wish I could have left you out of this," Caroline said sincerely. She picked up the envelope containing the other letter, the one to Derek, and gave it to Melanie. Her hand trembled slightly as she thought of what she was doing, what she had done. "Answering Jason Sinclair's request for a wife without so much as showing Derek the letter is shocking enough, but involving you… He'll be furious."

"He'll get over it." Melanie's brown eyes danced with mischief. "I'm glad to have helped. It was actually very exciting. How many women get the chance to be a groom in a wedding?"

Caroline laughed in spite of her doubts. "That was a stroke of genius."

Mel
anie shrugged dramatically. "Whoe
ver said the proxy groom had to be a male?"

Caroline touched a finger to the writing on the letter she'd just finished. Satisfied that the ink was dry, she folded the paper quickly and slipped it inside an envelope before she lost her nerve.

Sealing the envelope, she stood and gathered her things, gazing one last time at the small wooden desk and chair that had been hers for the past year.

"You know, I think I'll actually miss this place," she said sincerely.

It was a shame most women were never allowed a glimpse into the exciting, dynamic world of business. Here at the Sinclair Coffee Company she'd felt needed, competent. And there was a certain satisfaction that came from earning one's own way.

"And I shall miss you." Melanie smiled a sweet, melancholy smile.

"I am your friend always," Melanie assured her, her tone solemn, her expression serious. "Remember that."

Caroline nodded, unable to speak past the emotion that clogged her throat, trembling as a shiver of apprehension crawled up her back. Was she doing the right thing? She prayed god she wouldn't regret this decision a few months from now.

Straightening her shirtwaist, she followed Melanie to the door where she stopped, glancing around the dark, familiar lobby.

She might miss the vigorous world of Sinclair Coffee Company, but she would be glad to leave New Orleans behind, glad to escape the strictures of a society into which she had never fit, a society that had always tried to crush her independence.

Corsarios de Levante by Arturo Pérez-Reverte
After The Bridge by Cassandra Clare
A Witch Alone (The Winter Witch Trilogy #3) by Ruth Warburton
The Armoured Ghost by Oisin McGann
The Strange Death of Mistress Coffin by Robert J. Begiebing
Into the Shadows by Karly Kirkpatrick
Fix You by Lauren Gilley
Captain Ingram's Inheritance by Carola Dunn
Unplugged by Lisa Swallow
On My Knees by Periel Aschenbrand