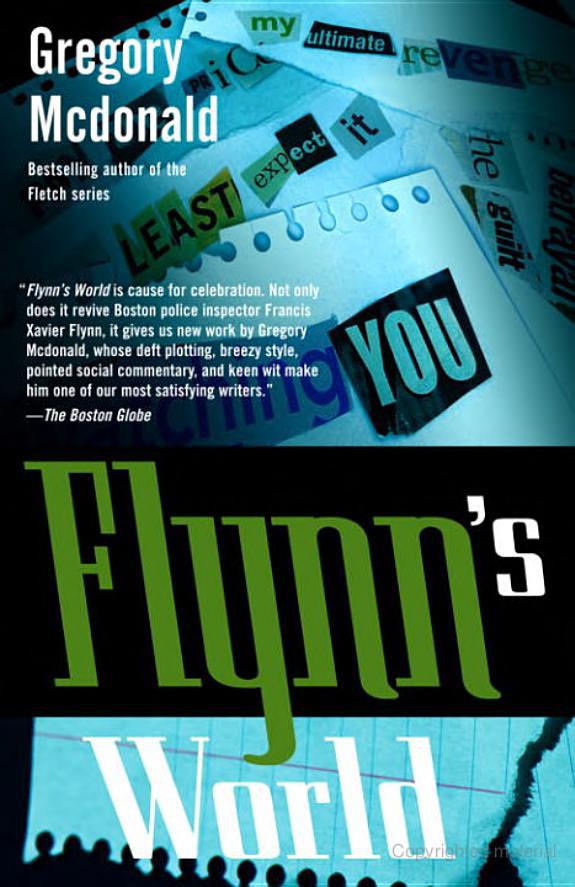 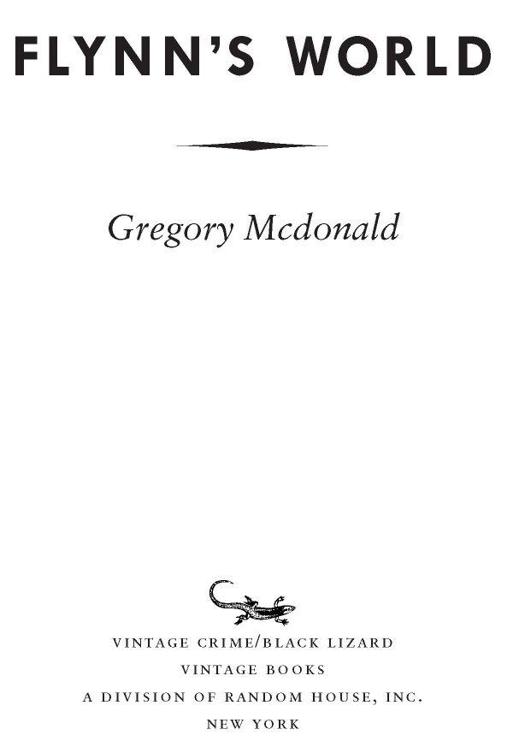 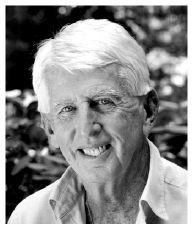 Gregory Mcdonald is the author of more than twenty-five previous novels, including eleven Fletch novels and four Flynn mysteries. He has twice won the Mystery Writers of America’s prestigious Edgar Allan Poe Award for Best Mystery Novel, and he was the first author to win for both a novel and its sequel. He lives in Tennessee.

In his sleep, Boston Police Inspector Francis Xavier Flynn again was on the ground, a boy asleep against a warm brick wall. The other side of that wall, a city was burning.

Cross-legged, his thirteen-year-old daughter, Jenny, sat on the rug beside his bed. Bathed in the light that came through the opened bedroom door, her curly blond hair gleamed; her brilliant blue eyes, as big as saucers, beamed at him.

“Why are you waking me up in the middle of the night?” He felt for Elsbeth. She was not in the bed with him.

“It’s not the middle of the night, Da. It’s only eightfifteen.”

“Right. I came to bed at six o’clock, didn’t I? Having had no sleep at all last night.” He had spent Saturday, Saturday night until four-thirty Sunday afternoon discovering the whereabouts of a woman who had taken a car from outside a pharmacy. The car was not hers. In a safety seat in the back of the car was a sixteen-month-old girl. The baby was not hers, either.

Flynn turned on his bedside lamp. He said to Jenny, “The question remains. Why is my bit of fluff awakening me in the middle of my night?”

On the rug between her knees were a hammer, a screwdriver, a pair of pliers, a flashlight, a box of gauze, and a bottle of tincture of iodine.

“Need you. Please get dressed and come with me.” Without using her hands or arms, she stood up from where she had been sitting cross-legged. “As quick as you possibly ever can.”

“Where are we going?” he asked.

She picked up the odd collection of things from the floor. “Please hurry. I’ll make you a cup of Red Zinger tea while you’re getting dressed.”

“Oof!” In the cemetery Flynn fell into a hole in the ground filled with dead leaves. “Oh, me God.” He rolled over in the leaves and sat up. “For an instant there, I thought the grave had reached up and pulled me down. And before my fill of formaldehyde, too!”

After climbing over the cemetery’s stone wall Flynn had followed his daughter up a hill thick with dead leaves. In the fog the tombstones were not at all visible at a distance; when they did loom into view they appeared bigger than they were. There was full moonlight in the low fog. Jenny had rushed on ahead without using her flashlight.

Holding his hand, Jenny had hurried him down the steps of their house and along the foggy Winthrop sidewalk.

“What’s all this about?” Flynn had asked.

“What’s a Billy?” Part of Flynn’s mind was still in the bed, asleep. “A billy’s a goat. Or a nightstick.”

“How do we know Billy, although I’m not sure I do?”

“He’s been to the house.” A goodly number of children wandered through Flynn’s house, as he had five of his own. He could not swear to have studied them all. He doubted he had ever seen the faces of some—those who seemed to stand permanently facing the inside of the opened refrigerator.

“Is Billy at school with you?”

“He goes to public school.”

“Discomfited,” she said with dignity.

“Then he must be alive.”

“Sometimes Billy and I meet in the cemetery. You know, to talk things over. Religion. Politics. Billy loves history.”

“Why on earth do you meet in the cemetery?”

“Sometimes we take the names and dates from the tombstones and imagine what the people, families must have been like when they were alive, you know? Billy and I make up stories about them.”

“You meet this boy in the cemetery after dark?”

“Sometimes. Billy’s not afraid of things like that. I know some people are.”

“Besides, Billy’s on the wrestling team. He says he’s not ready yet for all the guys, you know, to josh him about seeing so much of me. A girl.”

“Who indeed? Especially after dark in a cemetery? I admit to a small degree of incredulity myself, Ms. Fluff.”

“Here’s the place in the wall we climb over.”

“Ah, yes.” Flynn lifted one tweed leg over the low stone wall. “I’ve heard people are dyin’ to get into this cemetery.”

By the time he fell she had disappeared uphill in the fog.

Returning down the hill, Jenny flashed the light on her father sitting on dead leaves. “Why are you sitting there? We’re in a hurry.”

“I’m resting,” he said. “In the last forty-eight hours I’ve had two hours of sleep, I remind you. If you had asked me at five o’clock this afternoon how I envisioned myself spending the night, I doubt I would have said dashing about after you among tombstones in a fog.”

“Oh, yeah.” Jenny turned off the flashlight. “Did you find the woman and the baby?”

“I found the woman,” Flynn said. “Then I found the baby. Would you believe the woman had hidden the baby in a clothes drier?”

“Sixteen-month-old baby.” Jenny sniffed. Much had been expected of the Flynn children. “Ought to be able to make noise. Walk.”

“Indeed, yes,” agreed Flynn. “As well as fold her own diapers. The baby was peacefully, soundly asleep in the drier, which I would very much like to be at this very moment, myself.”

“In a clothes drier?”

“By telling the woman we weren’t going to look for her. See? There’s good in us all, if you can just believe it.”

“Jenny, I doubt Billy’s falling into a hole or whatever is a police matter.”

“Are you sure you want someone of my august police rank involved in whatever foolishness Billy has gotten himself into?”

“I mean, why did you raise me from the nearly dead to come help you extricate your friend Billy from his discomfit in a cemetery?”

“Why didn’t you enlist the help of your brothers, Randy and Todd, who, at age fifteen, have already shown considerable resourcefulness in matters delicate and in?”

“Sunday night? Oh, yes. I guess I forgot that.” Flynn stood up from his mulch pile. “All right, then. If I’m Billy’s only hope, lead on, MacFluff.”

More slowly this time, Jenny led her father up the cemetery’s hill.

“I must say,” Flynn said, “you seem to have an uncommon working knowledge of this boneyard. After dark, and in the fog, too. Prior to this, I’ve only visited this particular piece of real estate socially.”

“Ah, well, lad: someone doesn’t approve of you all that much.”

Standing as tall as he could in the foggy graveyard, Billy’s head was close against a tree.

His right ear had been nailed to the tree.

“That’s the way of it, is it?” With the flashlight, Flynn examined the carpentry closely. “Whoever did this to you did you no favors at all. That nail has a sizable head on it. And he nailed you flush to the tree. And you’re not saying who did this to you?”