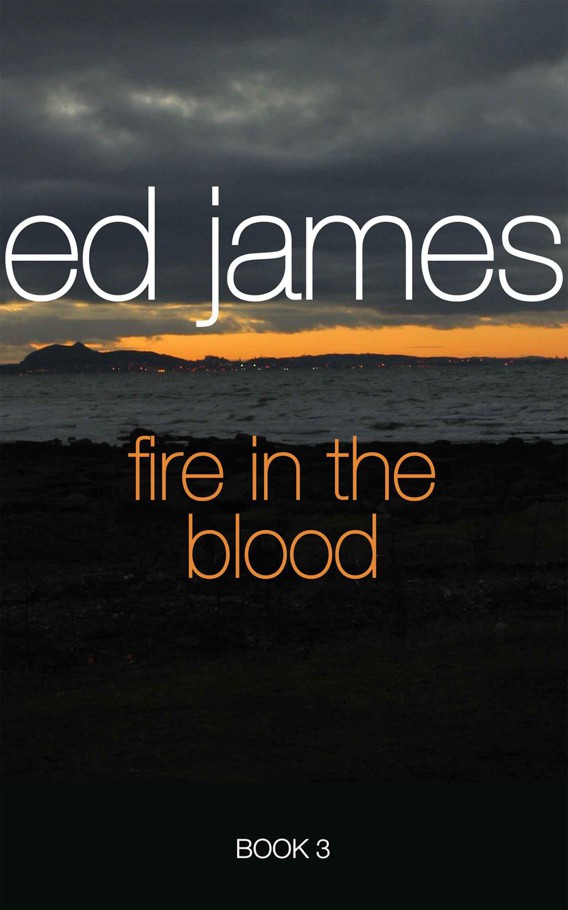 Published by Ed James at Smashwords

OTHER BOOKS BY ED JAMES

1
GHOST IN THE MACHINE

2
DEVIL IN THE DETAIL

3
FIRE IN THE BLOOD

4
DYED IN THE WOOL

1
SHOT THROUGH THE HEART

Sincerest thanks for the support, advice, research and friendship over the years, and for encouraging me to pick up GHOST IN THE MACHINE again just over a year ago - I had given up.

Doug Strachan stood by a sherry oak barrel mounted on a rack in the damp, cold basement storage room of Dunpender Distillery. He checked the date on the bottom, and lost himself in reminiscence to eighteen years previously when the barrel had been filled with immature whisky.

Eventually, he set to work and tapped the bung - the stout wooden stopper that kept the barrel whisky-tight - with a large mallet and eased it out slowly, placing it in the pocket of his overcoat for safe-keeping. He then lowered the dog - a long copper cylinder on a chain - deep into the barrel and allowed it to fill. Retrieving the dog, he poured the contents into a clear glass bottle and spent a few minutes swirling the bottle and examining the golden liquid. It looked nice and clean to him, with no noticeable impurities. It had taken on the lighter colour of the sherry oak cask it had sat in for the last eighteen years and was a worthy candidate for the blend of the centenary edition. Ready to drink, if anything, thought Strachan. He took a sniff of it and drank in the aroma of the unblended spirit for perhaps a bit too long.

Replacing the bung, he moved over to the second barrel of the pair – this one a darker bourbon cask to compliment the softer sherry oak of its sibling when they were blended together. He tried to remove its bung but it was stuck fast. A good few hits with the mallet and it finally slackened off. He wiped his forehead with a handkerchief - he shouldn't be sweating in the room given how cold it was, but he hadn't expect any form of exertion and he was dressed in a few layers. He dipped a second dog into the barrel.

It hit something hard.

Frowning, he retrieved the dog - it had only filled a fraction. It danced about on the chain and spilled its contents onto the cracked flagstones of the floor. He picked the torch up and shone it into the barrel, angling the light to cut through the liquid.

The torch shone on an object which he struggled to make out. He shifted the torch's light about, trying to get a better view of it.

Eventually, he identified a human ear.

Detective Constable Scott Cullen and Detective Sergeant Sharon McNeill sat in the June sunshine at an outside table of an Italian cafe on the Royal Mile, both a rare conceit to cosmopolitan dining on the part of the city and to taking a proper lunch break on the part of Cullen. He tucked into a plate of Penne with a spicy tomato sauce, threaded through with tiny shards of Italian sausage and dusted with a sheet of parmigiano. He had tied a napkin on to cover his shirt and tie, like some mafia don in a Robert De Niro film, already splashed with some red. There was a light summer breeze blowing down the street, carrying the smell of frying garlic and the occasional fug of cigarette smoke from passing tourists.

Across the table sat Sharon McNeill, Cullen's girlfriend and one-time boss, dressed in off-duty jeans, t-shirt and leather jacket. She was eating a carbonara - Cullen hadn't mentioned the blob of cream sauce that streaked down her cheek.

She looked up at him, a wry grin on her face. "Are you ready to talk about it yet?" she asked.

He finished chewing and took a mouthful of Italian lemonade. Before he started he took a deep breath and tried - for once - to think before he spoke.

They were able to meet for lunch because Cullen had spent the morning in court, giving and hearing evidence, astonished that it had taken almost five months to convict someone with a signed confession. Somehow Cullen's current boss - Detective Inspector Brian Bain - had escaped appearing in court and had delegated the witness actions to Cullen, two rungs below him on the CID ladder. The case had been solved that January in Garleton, a town perched on the range of hills it was named after. Cullen had heard whisperings that Bain's boss, DCI Jim Turnbull - one of two DCIs in charge of CID in Edinburgh City's A Division of Lothian & Borders Police Service - had been involved in a bunfight over the bragging rights with his equivalent in Dalkeith, the head of the combined East Lothian and Midlothian E Division. For once, Cullen would side with Bain and Turnbull, as it was them who had actually solved the case and not the local CID. That said, he did have lingering sympathies for the officers who had contended well with Bain and his usual antics.

"I'm just pissed off with him," said Cullen.

Cullen nodded, then took another sip of lemonade.

Cullen exhaled. "It's all this me still being a DC stuff," he said. "If a DI delegates activities, it should be to a DS. He's lost Irvine to Cargill so he's grabbed me and I'm getting all his shite plus Irvine's shite."

DS Alan Irvine was Cullen's most-recent boss, but both had been reallocated to the newcomer, DI Alison Cargill, who many in the squad saw as DCI Turnbull's protégé.

"And you think you should be an Acting DS?" asked Sharon.

Cullen felt the irritation sting again. "It would help," he said, watching some Japanese tourists pass near the table - even in this day and age of smartphones with high megapixel cameras and gigabytes of storage, they still carried massive cameras around. He looked back at Sharon, searching for some sympathy in her eyes. "It's not like I'm totally stuck with him, but you know that as soon as another case comes up, it'll be all that 'Here, Sundance' shite all over again."

Sharon winced at the reference to Cullen's nickname, given as an extension of Bain's own nickname for her - Butch. Sharon had long escaped to another DI - Paul Wilkinson.

"The thing is," said Cullen, laying his fork down on the plate, "if I'm doing DS duties, then I should be given the formal recognition. I'm not after the money necessarily - I mean, it would be nice - but it's the recognition I want. I'm thirty now - I know DIs younger than me."

She closed her eyes. "Here we go again," she said. "Scott, you're still a young pup."

Cullen looked away, across the street at an obese American emerging from a tourist trap whisky shop. "The number of times that I've saved Bain's arse, don't you think that I deserve a DS?" he asked, conscious that his voice was growing nasal and whiny.

She laughed. "Leave me out of it," she said.

"It's not that," she said, looking away. "It's just that you keep going on about this. If you're pissed off, go and speak to Turnbull about it. He's the only one that can sort this out. He knows full well what you are or aren't doing. If you want a DS position, ask him if there are any going."

Cullen looked at her for a moment, then shook his head. "Thanks for listening," he said.

She reached over and grabbed his hand. "Scott, I can't do anything about it other than listen," she said. "And you know that I've been listening. If you want something done, then you have to speak to Jim about it." She took a sip of her water. "There's been a lot of upheaval recently, and there's a bigger one coming next year."

Cullen got what she meant - the merger of all eight of Scotland's police services into one body. At the very least, it might open doors for people like Cullen - they still hadn't announced the new Commissioner of the Service, but if it was the Lothian & Borders Chief Constable then it would represent opportunities for those further up the ladder than Cullen, which might be good for him.

Cullen's phone rang. He fished it out of his jacket pocket and checked the display. Bain. He let it ring through to voicemail. He looked back at her. He could feel frustration biting at him again so he decided to shift the conversation away from his career and avoid another argument. "You're on night shift tonight, aren't you?" he asked.

"I am," she said, raising her eyebrows. "Me and DI Wilkinson in a knackered old Vectra, sitting outside a house in Lochend. Just what I want."

Cullen laughed. "I'd almost swap you," he said. "Back out to Gorgie to sit with Irvine." He took another mouthful of pasta and chewed it. "I've managed to avoid stakeouts so far in my nine months with Bain, can't believe that I'm stuck with Alan bloody Irvine again."

Cullen and Irvine had previous - Irvine had filed a formal complaint against him - and the prospect of days sitting in Irvine's Astra in a backstreet in Gorgie while Irvine's jaw pounded away on gum filled Cullen with dread.

"Fine," she said, curling up another forkful of spaghetti. "He's up to something. I think he's going for a secondment onto another investigation."

Cullen's phone rang again. Bain. "Better take this." He turned away and answered the phone.

"Here, Sundance," snapped Bain, "why didn't you pick up when I called?"

"I was driving," said Cullen.

"Were you fuck," said Bain.

"What do you want?" asked Cullen.

"Did you not listen to your voicemail?"

"I want you to pick up Caldwell from Leith Walk and head out to Dunpender Distillery in East Lothian," said Bain.

"Fine," said Cullen, his voice betraying the fact that it was anything but. "Be there in about an hour."

"Better be quicker than that."

Cullen ended the call and put his phone away. He looked at Sharon and gave a long, deep sigh. "Here we go again…"

Cullen pulled his old VW Golf into the distillery car park in the early afternoon sunshine, having picked up Acting DC Angela Caldwell from the Leith Walk police station on his way out.

As he got out of the car, he looked at the Dunpender Distillery buildings, a set of old farm buildings, a mile or so east of Drem in the East Lothian countryside, constructed from an almost purple sandstone. Scores of metal pipes emerged from the nearest wall and flowed into towering steel condensers that loomed over the farm buildings - he had spotted them as they had driven down the long straight from Drem parallel to the railway line.

Caldwell tugged at his jacket and set off towards the main building. "You were drinking Dunpender at the Burns Supper in January, weren't you?" she asked when he caught up.