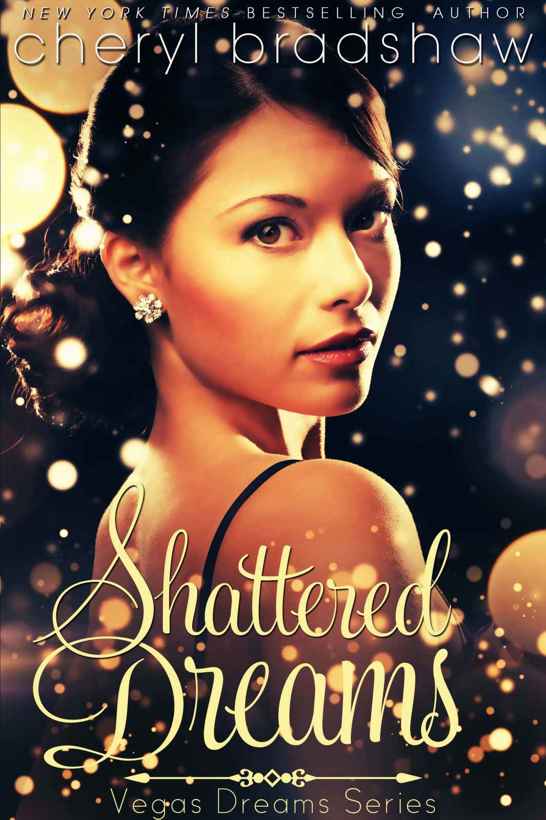 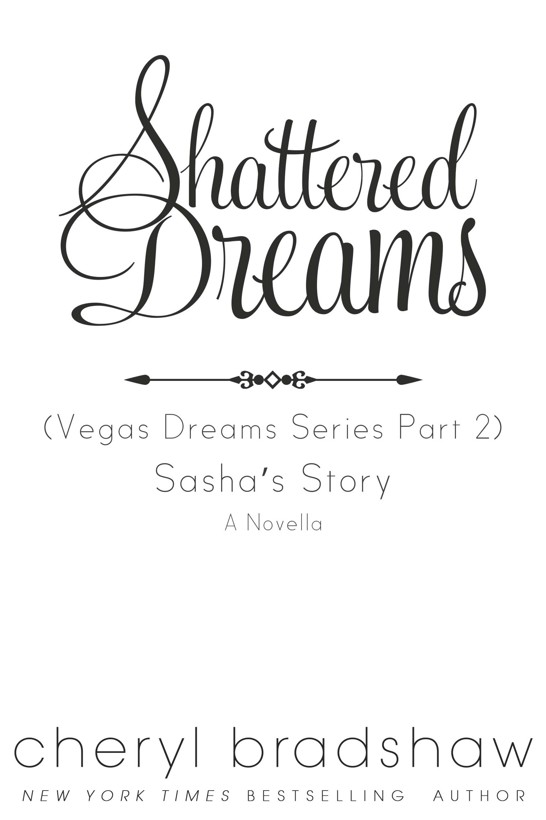 This book is a work of fiction.  Names, characters, places, businesses, and incidents either are the product of the author’s imagination or are used fictitiously. Any resemblance to events or locales or to actual persons, living or dead, is entirely coincidental.

No part of this book may be reproduced, scanned or distributed in any print or electronic form without the written consent of the author.

My name is Sasha. No nickname, in between last names. And this is my story.

My quest for love began four months ago in the worst way possible—standing in line at the county clerk’s office holding a pile of self-printed divorce documents in my trembling, not-so-hot little hands. My options, the statutory grounds for divorce in Las Vegas, were threefold:

Option Two: Insanity, for two years prior to the action.

Option Three: Spouses living separate and apart for more than one year.

Option Four, the one
I
wanted, the one
I
deserved to tick with a big, fat, juicy checkmark, didn’t exist. If it had, it would have said:

And bingo, we would have had ourselves a winner.

Given my present predicament, my initial thought had been to choose “insanity,” because in my mind, Damon (my soon-to-be ex) was certifiable, having spent a generous portion of our marriage in every other marital bed but mine.

I couldn’t select Option Three because, at the time, we’d only been apart for several months. That left one choice—incompatibility, defined as:

Unable to exist together in harmony.

Contrary or opposed in character.

And the granddaddy of them all:
Unable to belong to the object simultaneously
.

Since Damon had the extraordinary talent of belonging to
several
objects simultaneously, this one didn’t seem to apply either. I had to choose something though, so I selected “incompatibility” and baby-stepped my way up to the counter, silently affirming to myself that this was necessary—I
could
do this.

I forced a smile at the fifty-something, gray-haired woman on the other side of the counter. She didn’t smile back. She didn’t even look back. Instead, she focused on the dusty, metal clock on the wall while pressing her thumb to the tips of her fingers like she was counting down how much time remained before she could take her long-awaited lunch break. I guess I couldn’t blame her—it seemed like a shitty job as far as jobs go.

My throat was scratchy, making it near impossible to get the words out.

“Separation or divorce?” she grumbled.

She snatched the paperwork from my hands, riffled through the pages. “Has your husband agreed to the divorce?”

She did a blatant eye roll, making sure I physically witnessed just how short-tempered she was with me.

“You filled out the wrong paperwork.” Her tone indicated it was something she repeated multiple times each day. It also indicated the paralyzing need she had to point out my stupidity.

“This is a Joint Petition. You need to fill out a Complaint for Divorce. If he’s going to fight you—on anything—honey, take my advice, get a lawyer.”

“Can I fill out the right forms myself with a—”

She tossed the papers back to me and peered over my shoulder, indicating the free advice portion of her day was over, and shouted. “Next!”

And just like that, we were done, and I was screwed, just not in the way I deserved to be.

Damon was a lawyer. He worked for one of the best firms in town. He had connections,

and those connections meant if he wanted custody of our two girls, he’d find a way to get it. Not that he
wanted
custody. Even when we were together, he was never home. But he’d ask for it anyway, just to show me he could.

At first, I believed our divorce could be an amicable one. I pictured the two of us sitting down together like a couple of mature adults, or one mature adult and one adult version of a child. He’d sign, I’d sign. It would be over and I could pretend my marriage to world-class womanizer Damon Chase never happened. Well, all except for our two kids, the family dog, and the lifetime of photos we’d taken together on the days he elected for family life instead of a night out on the town with one of his whores.

Ten long years of the lines becoming so blurred, I couldn’t differentiate a lie from the truth anymore.

Damon was nothing if not skilled in the art of deception. I never actually caught him engaged in sexual activity with one of the hordes of other women he pimped himself out to on a nightly basis. He was smart. He was sneaky. He had two cell phones. One I knew about, and the other to accommodate his I’m-staying-late-at-the-office-honey-but-I’m-really-not bootie calls.

Every electronic device Damon owned was password protected. His phone, his laptop, his tablet, all of it. His reasoning? It was imperative in order to protect the privacy of his clients, in case, perchance, something of his was ever stolen. And this little naďve housewife had believed it—every spoon-fed, sugar-coated fib.

Because ladies, no matter how hard a person tries to conceal a secret life, it’s impossible not to slip up from time to time. Secrets have a way of seeping out when you least expect them to. Karma wouldn’t be karma if they didn’t.

It had been six months since I left my husband, and I still didn’t have a lawyer. What I did have was several late-night liaisons. I’d been licked, flicked, and whipped—well, almost whipped, once. Most single women would probably relish the lifestyle. I didn’t. Men didn’t make love to me. They had sex with me. When it was over, we both went our separate ways, in a very “twain will not ever meet again” scenario.

At present I found myself beneath the sheets of a king-size bed, in a fancy hotel room on the Vegas strip. Asleep next to me was a male who looked a little like a man and a lot more like a college frat boy. His name? Ryan or Rowdy. Or was it Randy? I didn’t quite remember.

The man—whom, for now, I called “R”—was pretty and toned with pale, blue eyes and blond, Owen Wilson hair. He was minus the endearing, crooked nose though. His snout was narrow with a pointy tip that curved just the slightest bit upward. Although he had a baby face, I imagined his age was somewhere around twenty-five, making me four years his senior. Anyone younger wasn’t suitable or acceptable, at least not in my mind. I was no cradle-robber, and I wasn’t a super-sized cougar either.

I eyed R, resisting the urge to lean over and tuck one of his stray, wispy locks behind his ear. He wasn’t mine. And he wouldn’t ever
be
mine. He was a loaner, a temp, staying with me just long enough to get what he needed until he moved on to the next girl.

While he slept in a deafening, snoring slumber that sounded like the noise a ship made when leaving port, I sat with my knees curled in front of my chest, arms draped around them.

What was I doing?

And I couldn’t pretend it was even if the thought of it made it easier on me.

So why was I doing it?

I’d thought if I did what Damon did—romping it up with anyone with a pulse—somehow I’d feel better, even the score, be able to process the pain of playing second fiddle over and over again. I convinced myself my own one-night stands would fill a void a decade in the making. As hard as the truth was to accept, sitting here finally processing my feelings, I realized I actually felt worse. I felt alone. And I knew it was time. Time for it all to stop.

I cleared my throat loud enough to stir the occupants of the next room, but R didn’t wake. I nudged him, kicking him in the shin. Not hard enough to leave a bruise, but enough to get his attention.

His eyelid slid open. He smiled. “Hey there, Tasha.”

He cocked a finger at me in the shape of a loaded gun. “Sexy Sasha ... right.” He glanced around, squeezing his eyes closed again like they couldn’t bear the light beaming through the window. “What are you doing up already?”

Already? It was almost time to check out.

I supposed I could have slipped out without bidding him the awkward adieu, but sneaking out like nothing had ever happened wasn’t my style. If I was going to do the walk of shame, I’d do it with my head held partway high.

He reached over, wrenching me backward until my top half was draped over his bare, sporadically hairy chest. He cupped the tips of his fingers over my shirt and squeezed, as if the feeling of my breasts being pinched with a clothespin got my rocks off. “Stay. Let’s go for round three.”

He whipped his head to the side, his bangs temporarily brushing across one ear before sliding back over his eyes again. “Nah ... you sure? I’m sure I brought more.” Let me check my pants. I’ll find ’em.”

Project Pope by Clifford D. Simak
The Dark Valley: A Commissario Soneri Mystery (Commissario Soneri 2) by Varesi, Valerio
Veronica COURTESAN by Siobhan Daiko
The She-Hulk Diaries by Acosta, Marta
Supernatural: Night Terror by Passarella, John
A City Tossed and Broken by Judy Blundell
Pete (The Cowboys) by Greenwood, Leigh
The Killing of Emma Gross by Seaman, Damien
My Other Car is a Spaceship by Mark Terence Chapman
The Silver Swan by Kelly Gardiner