Finding the Right Girl (A Nice GUY to Love spin-off) 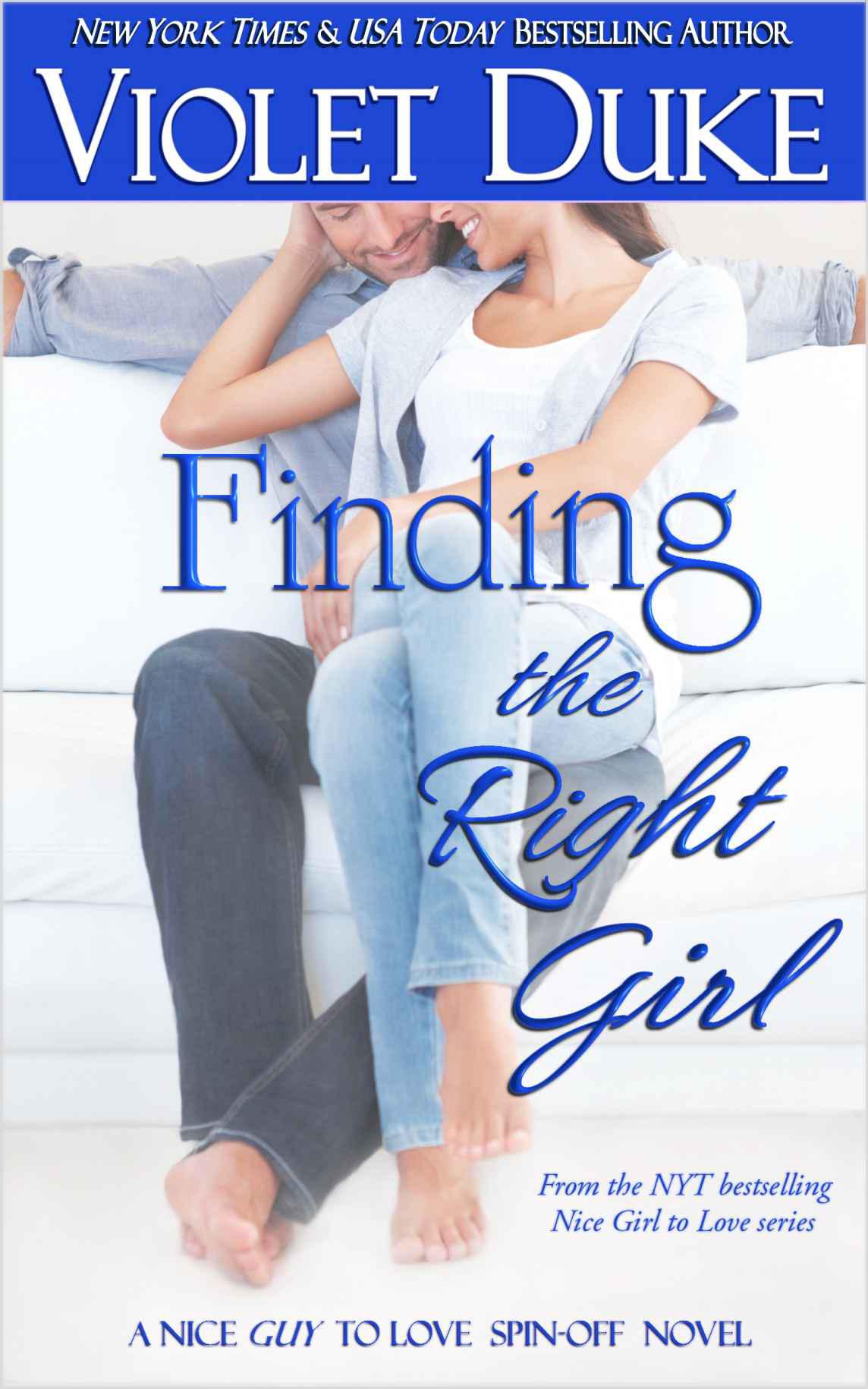 OTHER TITLES BY THE AUTHOR

Excerpt from A Maine Christmas…Or Two

This book and any portion thereof may not be reproduced, scanned, transferred, or distributed in any print or electronic form without the express written permission of the author. Participation in any aspect of piracy of copyrighted materials, inclusive of the obtainment of this book through non-retail or other unauthorized means, is in actionable violation of the author’s rights.

This is a work of fiction. Names, characters, businesses, places, and events are either the products of the author’s imagination or used fictitiously. Any resemblance to actual persons, living or dead, or events is purely coincidental.

From the
New York Times
&
USA Today
bestselling author who brought you the Nice Girl to Love trilogy, comes A Nice
GUY
to Love spin-off...
Brian Sullivan has been in love twice in his lifetime. He lost his first love to early-onset Huntington’s, and he lost the other more recently…to his brother. And somehow, his heart has managed to heal itself after both. Amazingly, without therapy. That doesn’t mean Brian hasn’t gotten more wary along the way, however. In fact, he’s been thinking lately that maybe his brother’s now retired nothing-but-flings rule isn’t such a bad idea. Unfortunately, being the nice guy poster boy and all, he isn’t exactly versed in the fine art of flings. So he looks to the outrageously ‘unique,’ provokingly
button-pushing
Tessa Daniels for a crash course.
There’s absolutely no way he’s falling in love with this one...right?
Tessa has no idea what she was thinking telling Brian that she was some sort of fling expert. She’s never been flung before and she sure as heck doesn’t know where or how to begin flinging a guy like Brian. It was a temporary lapse in sanity, really—no doubt because of the can’t-help-but-fall-for-him brain fuzz that hits her whenever he’s around. Not only does the man have her being more herself than she’s ever been in her life, but he’s the only person she knows who seems to have as many demons and skeletons in the closet as she does. What’s more, he’s got her thinking of the one thing she stopped letting herself even hope for years ago.
A happily ever after.

O
THER
T
ITLES
B
Y
T
HE
A
UTHOR

FALLING FOR THE GOOD GUY, Book #2

To my parents, my in-laws, and of course my MVD (Mr. Violet Duke).

Without you, I’d just be a crazy person with a whole lot of stories in her head. You all make it possible for me to be an author.

“
P
URPLE
AGAIN
? Why don’t you ever put
green
in your hair, Tessa? Green’s my favorite.”

Tessa Daniels grinned at the slight w-lisp she could still hear curled into the word ‘green.’ It was so darn adorable. Had the cherubic young girl sitting across the room from her not spent the last two, nearly three years missing long stretches of school from all her complications with Juvenile Huntington’s Disease, however, she had no doubt that lisp would’ve been gone by now.

Sweeping her purple-tipped hair up into a ponytail, Tessa went over to sit on the edge of Jilly’s newly installed hospital bed. It was one of the three dozen new top of the line beds now housed here, thanks to the grant money she and her friend Connor had managed to secure for the care home his sister-in-law had lived out her Huntington’s end-stage in. “Green? I thought your favorite color was rainbow, Jilly-bean.”

“You made a rhyme!” giggled Jilly, trying and valiantly succeeding in softly clapping together her two little hands, despite the near-frozen curved angle of her fingers preventing her palms from making solid contact with one another.

Seeing the rigidity of the six-year old’s limbs and fingers—the worst case she’d seen since becoming active in the fight against the juvenile and adult forms of HD—tore another jagged shard out of Tessa’s heart.

“I’ve never been able to find a green hair dye that’ll show on my dark hair,” answered Tessa belatedly. “But now I’ll be sure to look even harder.” She grabbed the small tub of crayons and poured it out on the activity tray that hooked onto the side of Jilly’s bed. “Which color green do you like better, the darker ones or the lighter ones?”

Jilly took a long, serious look at the crayons, sifting through them with her splayed fingers, poking at and then dismissing various colors of green with her pinky.

Tessa couldn’t help but smile a proud, albeit sad smile when Jilly used her thumb to expertly flip one of the crayons up by its sharpened tip and catch it between two of her fingers. Every day in all these little ways, Jilly was showing herself to be so incredibly adaptive to the increasing stiffness in her extremities due to her JHD. “Slick move there. Did your physical therapist show you that one?”

“Nope, I learned it all by myself,” beamed Jilly, as she held up the chosen crayon, wedged between her index and middle finger as one would hold a cigarette. “I like
this
one the best.”

“Oh man!” Tessa feigned horror and put the bright green crayon up to her hair. “Neon green? I’ll look like a glowing alien with neon green stripes in my hair.”

“You’ll look like a mermaid princess!” squealed Jilly, bopping happily in her bed. “I can’t wait to see it!”

That was yet another thing Tessa admired about Jilly. The happy little girl simply did not live her life in maybes; she believed in things with her whole heart, and looked forward to that assured reality with all the confidence in the world.

“Okay, neon green it is,” promised Tessa, angling the tub off the edge of the tray so Jilly could slide the crayons back into it. It would have taken a fifth of the time to just scoop up the crayons herself, but Tessa had learned long ago not to rob anyone with JHD any task they could accomplish on their own. “So what do you want to do first today? Do you want to take a cruise around the courtyard and hang out in the garden or play a round of video games?”

Smiling, Tessa pulled a little video game cartridge out of her pocket and let Jilly gush over the new game while she set the TV and modified controllers up for them to play head-to-head.

“This is the exact game I wanted! How did you know?” Unable to sit still, Jilly was practically bouncing off the walls with excitement as Tessa clicked in the new cartridge.

“You remember my friend Connor? His niece Skylar recommended it; her BFF’s little brother is your age and she said this game is the talk of the playground.” Tessa slid the comfier of the two chairs in the room over and settled in next to Jilly—this was no doubt going to go on for a while. “And unfortunately for you, missy, Skylar gave me a few pointers on how to totally own you at this game.”

A fierce little glint lit up Jilly’s eyes. “If I win, I get to pick the movie we watch today.”

“Whoa, we’re playing high-stakes are we?” Tessa made a show of eyeing her pint-sized opponent up and down. “Okay, Jilly-bean, you’ve got yourself a deal.”

As they shook hands, Tessa had a quick flashback to a similar handshake agreement they’d had months ago, when a very mulish Jilly had demanded that Tessa stop letting her win at everything. Or else.

Lordy, she loved this tiny little miracle to pieces.

They quickly got down to business and not even two minutes into the game, Tessa already knew that it was going to be princess movie kind of afternoon.

B
RIAN SULLIVAN STOPPED
and stared at the photo of his wife up on the memory wall of the care home in Cactus Creek where she’d spent the last few years of her life. It was taken when she’d first been admitted—a far cry from the pictures of her that were forever burned into his memories, candid snapshots his mind held onto from the first day he’d laid eyes on her back in high school, and the even more different memories of the last, of many, times he’d been forced to say goodbye to her at the end. Beth had only been twenty-eight when she died but her decade-long battle with JHD had aged her far more than was fair in pain and suffering…ditto on its effect on him and his daughter as well.

He hadn’t been back to the care home for over three years, not since Beth’s funeral. But he’d made a point to come in today to drop off a gift for one of Beth’s favorite nurses on her last day before she retired. The amazing woman had saved Beth’s life on at least a dozen occasions during her time there.

Instead of heading right back to his car, Brian found himself walking through the courtyard over to the back garden area. His wife used to love sitting out there and feeling the sun on her skin. Even after she stopped remembering his name and then eventually stopped recognizing him altogether, there were times when he’d come by to visit her and she’d immediately point at her wheelchair and smile. He had doggedly clung to the hope that some part of her brain seemed to remember that he would take her out back and sit with her.

At least that’s what he used to tell himself on the really bad days when she’d look at him not just in confusion, but in fear. When he’d hear her gurgle out a panicked stranger-danger cry, which would break his heart every single time.

He sat and replayed the memories as he gazed out at the craggy mountainous landscape just beyond the fenced garden of the care facility. Random giant cactuses standing head and shoulders above trees that looked deceptively like tall, unkempt grass from afar, dried in every shade of green under the sun. His eyes wandered aimlessly, restlessly over it all…until a splash of electric color in stunning contrast to the rugged, red dirt backdrop drew his focus like a magnet, and had him doing a jarring double-take.

Squinting, he eyed the tshirt and shorts clad figure disappearing into the deep pockets of the mountainside, dips and hollows that carved out valleys most folks would never know existed under the camouflage of the arid overgrowth all around.