Fateful Lightning: A New History of the Civil War & Reconstruction 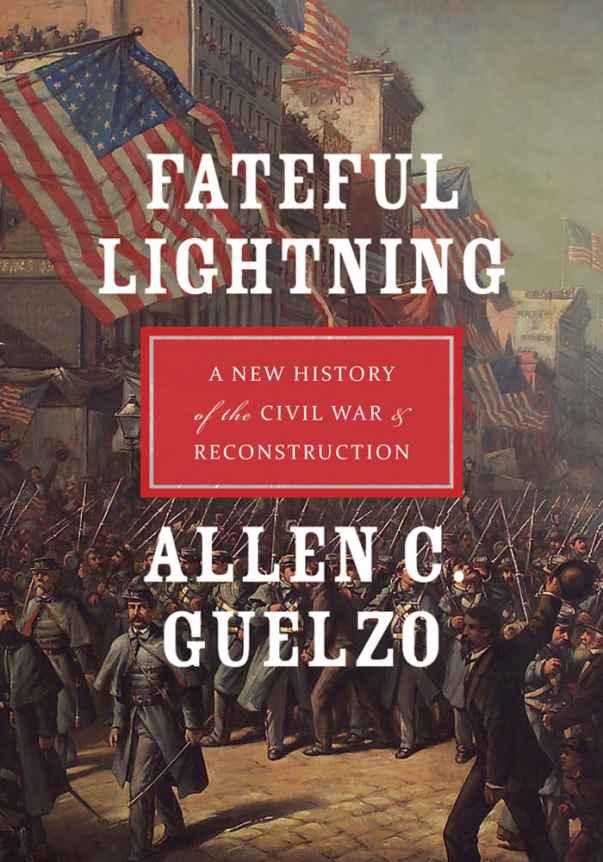 A NEW HISTORY OF THE CIVIL WAR & RECONSTRUCTION

in research, scholarship, and education.

The first edition of this book was published as
The Crisis of the American Republic: A History of the Civil War and Reconstruction Era
(St. Martin’s Press, 1994).

All rights reserved. No part of this publication may be reproduced, stored in a retrieval system, or transmitted, in any form or by any means, electronic, mechanical, photocopying, recording, or otherwise, without the prior permission of Oxford University Press.

“First edition… was published as The crisis of the American Republic : a history of the Civil War and Reconstruction Era, St. Martin’s Press, 1994”—T.p. verso.

1. A Nation Announcing Itself

2. The Game of Balances

7. The Manufacture of War

In acknowledging the help, encouragement, and support of so many others in the creation of this book, the mere extension of thanks seems but a poor reward for the value of those contributions. Nevertheless, the well of personal gratitude for the time, labor, and sympathy which was given by those whom I salute here is real and profound. I begin with two of my former students in the Civil War Era Studies program at Gettysburg College, Brian M. Jordan (Yale University) and Brandon R. Roos (King’s College, London), who devoted long nights and caffeine-fueled energies to fact-checking, and on a purely volunteer basis. Various other debts have been accumulated in the name of Thomas Legg (West Chester University), Stephen Fratt (Trinity College), Steven E. Woodworth (Texas Christian University), Thomas Askew (Gordon College), and James Geary (Kent State University). Steven J. Wright, former curator of the old Civil War Library & Museum, Roland Baumann of the Oberlin College Archives, and James Mundy of the Union League of Philadelphia cheerfully provided access to rare Civil War materials in their collections.

The images in this book are the result of a long process of collection and selection, which included generous cooperation by David Charles (1926–2004), Blake Magner (1950-2011), Henry Deeks, and the Library Company of Philadelphia. Cathy Bain, Lauren Roedner and Tim Koenig of Gettysburg College provided invaluable assistance in acting as liaison between myself and Oxford University Press, where Nancy Toff and Sonia Tycko played the key roles as readers, managers, schedule-keepers, and editors of the manuscript. Michele Rubin and Brianne Johnson of Writer’s House, Inc., provided a helping hand at a key point in the evolution of this project. Dorothy Bruton (1925–2009) of Dallas, Texas, knew what the rebel yell really sounded like, and generously granted me permission to use the
letters of her grandfather, George Asbury Bruton of the 19th Louisiana. My wife, Debra, has been a loving and faithful reader and exhorter all through the writing of this book, and I have at times had the peculiar pleasure of being outrun by her in a mutual enthusiasm for it. She has hallowed it far above my poor power to add or detract.

CHAPTER ONE
A NATION ANNOUNCING ITSELF

I
nauguration Day, March 4, 1865, dawned over the city of Washington with a blustery, overcast chill. It rained early in the morning, cleared, then rained again. But even without the cooperation of the weather, thousands upon thousands—“a crowd almost numberless,” wrote a visitor—braved the drizzle and cold to watch a giant parade, with now sodden floats, wheel up Pennsylvania Avenue toward the newly completed dome of the Capitol building. There, in the Capitol, the principal actor in this inauguration pageant, Abraham Lincoln, the president of the United States, was already at work, signing the last pieces of legislation passed by the outgoing Congress and witnessing a new Senate being sworn into office.

The ceremonies held few surprises for Lincoln, since this day would mark Lincoln’s second presidential inauguration. He had come to the Capitol on March 4, 1861, as a newly elected president, untried and unprepared, and now, four years later, the country had chosen him a second time as its chief executive. When the congressional ceremonies within the Capitol were over, a great file of legislators, cabinet secretaries, ambassadors, and judges streamed out onto the Capitol steps, where a broad platform had been constructed for the president to take his oath of office in public view. Last of all onto the platform came Lincoln, holding in his hand a single large sheet of paper. A band struck up “Hail to the Chief” as “cheer upon cheer arose.”
1

Four years before, when he first stood on a platform like this to take his presidential oath, the weather had still been thick with early spring chilliness and damp, but the sun shone with a hard and resolute cheerfulness. And in 1861 the sunshine was almost the only thing smiling upon Abraham Lincoln. Even as he took his first oath of office, swearing to “preserve, protect and defend the Constitution of the United States,” seven of those supposedly united states had renounced their attachment to the Constitution. They had already organized a rival government, elected a rival president, and demanded that any of the property of the United States government sitting at that moment within their boundaries be turned over to them at once. Lincoln refused, and in short order it all came to war, the rebel states insisting that they were now an independent country with a right to determine their own future, and Lincoln insisting that they were only insurgents who had to be suppressed like any other treasonous coup d’état. It was war such as few Americans had ever imagined: four years of it, with horrendous costs in life and property, and the ghoulish echo of homespun place-names made hideous in blood—Gettysburg, Chancellorsville, Shiloh.

And now the spring of 1865 was coming. Lincoln’s armies had finally turned the tide and the war was stumbling toward what looked like the end. In November the country had given Lincoln its vote of confidence by electing him to a second term as president. Now, on this raw March afternoon, as he stepped up to the low dais where he would deliver his inaugural address and take his second oath of office, he was ready to begin asking why the great horror of civil war had spread across his country. At that moment, the clouds parted and the long-hidden sun shone a golden aura down on Lincoln, the Capitol, and the hushed citizens below him.

There were, Lincoln said, three fundamental causes that had pushed the United States into the war. One of them was political, and that was the fact that the United States had been organized since its birth as a
union
. It was the creation of thirteen former English colonies, huddled along the eastern seaboard of North America, that had declared themselves independent states in 1776 but also linked themselves together under a joint congress as a confederation. Ever since, there had been voices within those states arguing irritably that this Union was a bad bargain that ought to be terminated. The voices had come to a crescendo in the Southern states of the Union in 1861, and Lincoln had found himself as president “devoted altogether to
saving
the Union without war” while at the same time having to deal with people who thought it right and proper “to
destroy
it without war—seeking to dissolve the Union, and divide effects, by negotiation.”
2

But simply because the Southern states thought the Union should be dissolved did not necessarily mean that it had to be, ought to be, or even could be, and that led Lincoln to the next fundamental reason for civil war. “One eighth of the
whole population were colored slaves, not distributed generally over the Union, but localized in the Southern part of it.” Protecting slavery, Lincoln declared, had become the chief irritant that provoked the Southern states to reach for the solution of disunion. “These slaves constituted a peculiar and powerful interest,” one that Lincoln and the northern states of the Union had declared a moral abomination that needed to be contained and suffocated. Though the Southern states hotly denied that they wanted to withdraw from the Union merely for the pleasure of enslaving people, Lincoln insisted that “all knew that this interest was, somehow, the cause of the war.” Waving aside all the other supposed reasons for secession and war, Lincoln insisted that “to strengthen, perpetuate, and extend this interest was the object for which the insurgents would rend the Union, even by war.”

Even that much did not explain matters fully. Lincoln had come into office in 1861 swearing to uphold the Constitution, which gave a number of vague guarantees to slaveholding in the fifteen Southern states where it was legal, and which gave presidents no power to meddle in state affairs such as slavery. In his first inaugural address, he had taken pains to acknowledge that, as president, he had no “right” and no “inclination” to attack slavery in those states. But across the Mississippi River, out over the broad prairies of the western half of the North American continent, were the immense miles of U.S.-owned territory that had not yet been peopled and organized by white Americans, and which one day would want to be recognized and admitted to the Union as states equal to all the other states. Should slavery be permitted to plant itself in those territories?