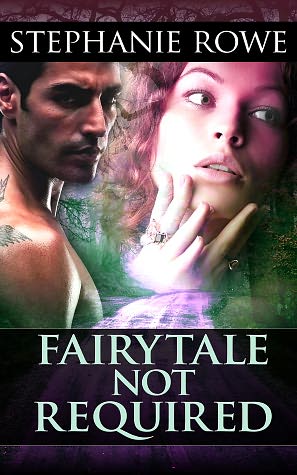 Praise for Forever in Darkness

“Stephanie Rowe has done it again. The Order Of The Blade series is one of the best urban fantasy/paranormal series I have read. Ian's story held me riveted from page one. It is sure to delight all her fans. Keep them coming!” ~ Alexx Mom Cat's Gateway Book Blog

“A fast-paced plot with strong characters, blazing sexual tension and sprinkled with witty banter,
Darkness Awakened
sucked me in and kept me hooked until the very last page.” ~
Literary Escapism

“Rarely do I find a book that so captivates my attention, that makes me laugh out loud, and cry when things look bad. And the sex, wow! It took my breath away... The pace kept me on the edge of my seat, and turning the pages. I did not want to put this book down...
[Darkness Awakened]
is a must read.” ~
D. Alexx Miller,
Alexx Mom Cat’s Gateway Book Blog

“[D]ark, edgy, sexy … sizzles on the page…sex with soul shattering connections that leave the reader a little breathless!...
Darkness Seduced
delivers tight plot lines, well written, witty and lyrical - Rowe lays down some seriously dark and sexy tracks. There is no doubt that this series will have a cult following. ” ~
Guilty Indulgence Book Club

“I was absolutely enthralled by this book…heart stopping action fueled by dangerous passions and hunky, primal men…If you’re looking for a book that will grab hold of you and not let go until it has been totally devoured, look no further than
Darkness Seduced
.”~When Pen Met Paper Reviews

“Book three of the Order of the Blades series is…superbly original and excellent, yet the passion, struggle and the depth of emotion that Ana and Elijah face is so brutal, yet is also pretty awe inspiring. I was swept away by Stephanie’s depth of character detail and emotion. I absolutely loved the roller-coaster that Stephanie, Ana and Elijah took me on.” ~
Becky Johnson,
Bex ‘n’ Books!

“
Darkness Surrendered
drew me so deeply into the story that I felt Ana and Elijah’s emotions as if they were my own…they completely engulfed me in their story…Ingenious plot turns and edge of your seat suspense…make
Darkness Surrendered
one of the best novels I have read in years.” ~
Tamara Hoffa,
Sizzling Hot Book Reviews

Praise for No Knight Needed

“No Knight Needed
is m-a-g-i-c-a-l! Hands down, it is one of the best romances I have read. I can’t wait till it comes out and I can tell the world about it.” ~
Sharon Stogner, Love Romance Passion

“
No Knight Needed
is contemporary romance at its best….There was not a moment that I wasn’t completely engrossed in the novel, the story, the characters. I very audibly cheered for them and did not shed just one tear, nope, rather bucket fulls. My heart at times broke for them. The narrative and dialogue surrounding these ‘tender’ moments in particular were so beautifully crafted, poetic even; it was this that had me blubbering. And of course on the flip side of the heart-wrenching events, was the amazing, witty humour….If it’s not obvious by now, then just to be clear, I love this book! I would most definitely and happily reread, which is an absolute first for me in this genre.”
Becky Johnson, Bex ‘N’ Books

For all those who still hold the memory of someone dear in their hearts. They never leave us.

Special thanks to my core team of amazing people, without whom I would never have been able to create this book. Each of you is so important, and your contribution was exactly what I needed. I’m so grateful to all of you! Your emails of support, or yelling at me because I hadn't sent you more of the book yet, or just your advice on covers, back cover copy and all things needed to whip this book into shape—every last one of them made a difference to me. I appreciate each one of you so much! I want to give a huge shout out to all my beta readers, whose eagle eyes and late night reading helped whip this book into shape. You guys are the BEST! Special thanks also to: Carla Gallway, Jeanne Hunter, Jan Leyh, Sharon Stogner, Summer Steelman, Teresa Gabelman, Holly Collins, Janet Juengling-Snell, and Phyllis Marshall. There are so many people I want to thank, but the people who simply must be called out are: Denise Fluhr, Dottie Jones, Alencia Bates, Emily Recchia, Rebecca Johnson, Nicole Telhiard, Mary Lynn Ostrum, Denise Whelan, Tamara Hoffa, Jean Bowden, and Ashley Cuesta. Thank you also to the following for all their amazing help: Judi Pflughoeft, Deb Julienne, Julie Simpson, and Shell Bryce. You guys are the best! Thanks so much to Pete Davis for such an amazing cover, and for all his hard work on the technical side to make this book come to life. Special thanks also to my amazing daughter, who I love more than words could ever express. You are my world, sweet girl, in all ways.

Table of Contents
Chapter One

He'd made a mistake.

Jason Sarantos felt the familiar sense of doom and failure settle over his shoulders as he stood in the doorway of the small Maine cafe he'd bought, sight-unseen, six weeks ago. He'd then promptly dismantled his life and his son's to leave New York and move to Maine to take over the store and open a pizza joint.

The sparkling new key dangled from his fingertips as he took in the magnitude of what he'd chosen in that one, desperate attempt to reclaim a life for his son. The store had once been a cafe, but now it looked like an ancient, long-forgotten tomb of rot and mold.

Not exactly what he'd been anticipating when he'd taken a jackhammer to his life, shredded it, and hauled ass up to Maine for a soul-inspiring new start.

He let out a sigh as he studied what he'd
thought
was going to be a quaint cafe in the center of a charming Maine town. He'd thought maybe there would be a vase of fresh flowers welcoming him, or maybe a little old lady with a plate of cookies would be standing in the doorway with a scruffy dog and an offer to babysit.

Yeah, not so much.

His small town greeting had been a couple of dive-bombing dragonflies, and the only tasty treat was the rotting wood along the top of the doorframe. The old linoleum floors were stained and torn, peeling up at the corners. Water had oozed from the window frames, marking the wood. The tables and chairs that he'd anted up to include in the purchase were nicked and damaged, covered in dust so thick he couldn't even tell what kind of wood they were made of.

Glass display counters were coated with grime, nowhere near large enough for the pizzas he'd planned to showcase to tempt customers into trying a slice, and the "charming light fixtures" were rustic light bulbs dangling from the ceiling. The place was smaller than he'd expected, barely fitting more than ten tables. The walls were once polished wood, but now the varnish was cracked and peeling.

And the stench. The air reeked of pungent decay, as if a rodent had died beneath the floor boards.

This was what it had come to? Two years ago, he'd had a wife, at least in name, two great boys and a career as an ER doc that had consumed him for the last twelve years. Now, it was simply death. Of his wife. Of his son. Of a life he'd thought was doing all right.

And now, today marked the apparent death of a second chance that was nothing but an old store that someone else had been smart enough to abandon.

He glanced over his shoulder at the quaint town center that had felt so charming when he'd driven through thirteen years ago on his honeymoon. An old-fashioned Maine town that had sat in his memory for more than a decade, beckoning to him until the time was right to claim the dream.

The time had never been right, but he'd always remembered how the town had made him feel, after he'd arrived so strung out from his first year at med school. Relaxed. At peace. At home. He'd never forgotten Birch Crossing, and when he'd seen that ad for the store after another hellish night of pacing the floor to avoid the nightmares, he'd jumped on it and sealed the deal before he had a chance to change his mind.

And now, the fantasy that had nagged at him for more than a decade was a reality of dead rat, mold and dust and a sense of disbelieving failure for what he'd thrust his six-year-old son into.

Noah shifted in his arms, burrowing more deeply against Jason's shoulder. After being too upset about the move to sleep last night or in the car, the boy had finally fallen asleep a half-hour ago. Jason had been planning to wake him up to do the big reveal, but now...

He couldn't do that to his son. Not yet. He'd have to find a way to frame it that would somehow, someway, make it okay for Noah.

God, was that what he was left with? Trying to restore his son's life with the smell of a decaying rodent? Yeah, okay, so Noah would actually be on board with that, but hell, it wasn't enough.

Jason strode across the room, spread out his sweatshirt as a blanket, and laid Noah on the window seat. Then Jason sat heavily beside him and dropped his head to his hands, digging his fingers into his temples. "Think, Jason," he said aloud, his voice echoing through the abandoned room. "There has to be a way to make this right."

"Of course there is," a woman said, her melodic voice drifting across the dust-filled room. "A fresh coat of lilac paint on the walls and maybe a blue-green turquoise on the ceiling, don't you think?"

Jason jerked his head up at the intrusion, and then froze when he saw who had spoken. It wasn't the old lady with cookies that he'd imagined. He'd been off by several decades and a whole lot of femininity.

A woman was leaning against the doorway to his shop, her brown eyes sparkling with merriment he hadn't felt in years. Her dark brown hair tumbled around her shoulders with a reckless abandon that spoke of a spirit that would never be tamed. Some of the curls had been woven into a yellow and green braided scarf that seemed to disappear into her thick hair. From each earlobe dangled several pairs of earrings, gold wire twisted into designs so intriguing he wanted to stride right over to her and see what they were.

She was wearing a pair of faded jeans that showed womanly curves that he hadn't thought about in way too long. The delicate straps of her pale yellow tank top rested across her collar bones, revealing a smooth expanse of skin that shot right to his core.