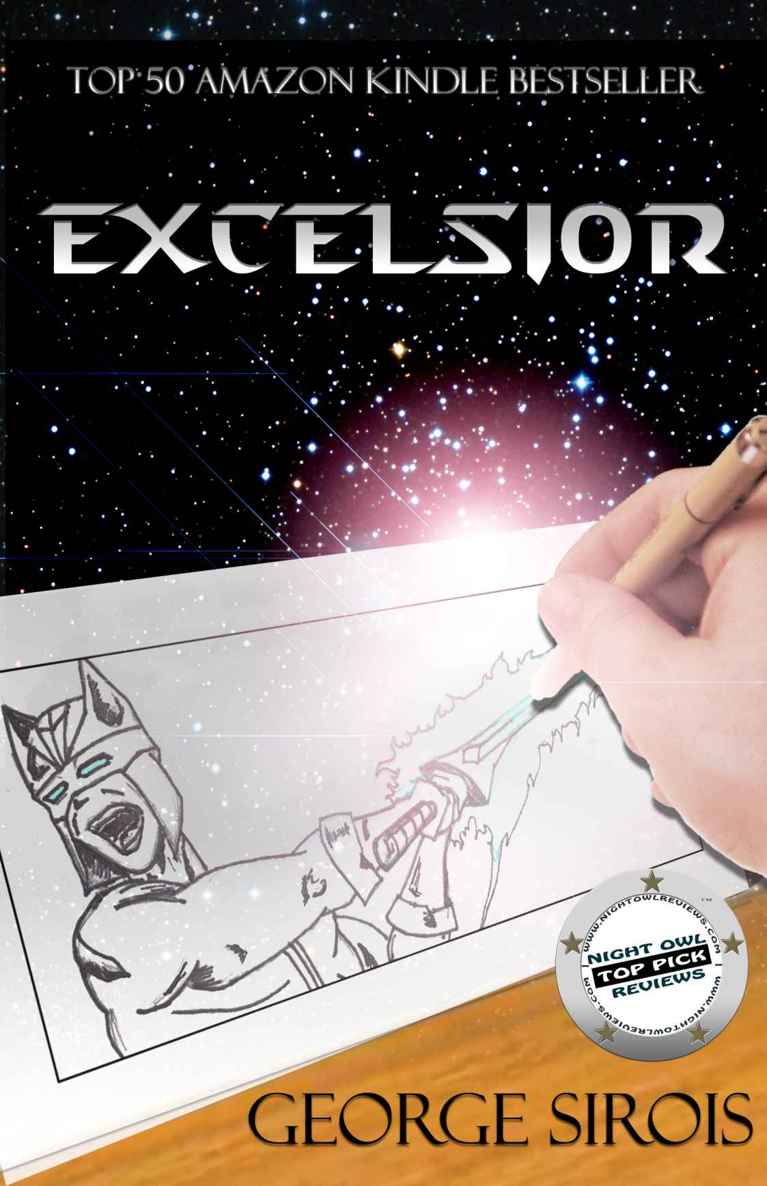 This book is a work of fiction. Names, characters, places and incidents are either the product of the author’s imagination or are used fictitiously. Any resemblance to actual persons, living or dead, or to actual events or locales is entirely coincidental.

Copyright © 2010 George H Sirois All rights reserved, including the right to reproduce this book, or portions thereof, in any form. No part of this text may be reproduced, transmitted, downloaded, decompiled, reverse engineered, or stored in or introduced into any information storage and retrieval system, in any form or by any means, whether electronic or mechanical without the express written permission of the author. The scanning, uploading, and distribution of this book via the Internet or via any other means without the permission of the publisher is illegal and punishable by law. Please purchase only authorized electronic editions, and do not participate in or encourage electronic piracy of copyrighted materials.

Everyone should be fortunate enough to be instructed at some point in their lives by a teacher that inspires them and encourages them in a way no one else ever could. I was lucky enough to be taught by several, and this book goes out to all of them.

To Nancy Mahar, my preschool teacher, the first adult outside of my family to reach out to me. To Michael Mazochi of Oak Grove Elementary School in
Poughkeepsie
,
NY
, the first teacher who really felt like a friend. To Mac Damron and Paige Whitten of
Godwin
High School
in
Richmond
,
VA.
Both were equally supportive of my creativity and did their best to make sure it blossomed when they were my Drama I, II &
III
teacher and my English 12 teacher. To Susan Shapiro Barash, my Writing for Television teacher at
Marymount
Manhattan
College
, for offering her full support in the classroom and beyond. To Art Horowitz, my Theatre History & Exploring the Performing Arts teacher, one of those great teachers that force you to feel a personal connection with them.

Lots of thanks go out to my friends, family members and fellow employees for their constant support, and for taking time out of their lives to listen to my incessant rambling while I was writing this.

A big thumbs-up to Chris Baty for writing “No Plot? No Problem!” which gave me the tools I needed to write the first draft to this book in only thirty days. Equal thanks to everyone at kiwiwriters.org for coming up with the Southern Cross Novel Challenge, so that I could write my 50,000 words during a time other than “National Novel Writing Month,” which is in November in case you were wondering.

Thanks go out to Karen Johnson Mead for her feedback on the first draft. Without her initial encouragement, I don’t think the book would have seen the light of day.

I can't thank my friend and editor JeriAnn M. Geller enough for going so far above and beyond my wildest dreams in making the book the best it could be. She took it upon herself to ask questions that I would have never thought of and was an integral part in expanding the universe I created so long ago. I may have got it going, but she gave it the depth it needed.

And even when you have the best possible editor you could ask for, you still don’t know how valuable a proofreader is until they come aboard, so thank you to my friend Susan Yacker for giving this book the final touch-ups it needed before its release.

Eternal thanks to my wife Cheryl for her love and support, her invaluable suggestions and for keeping up with the late hours.

Finally, to my cousin Matthew Henkel, a man who surprised a lot of people in his life, except the ones who knew him most. I miss you, man…

I asked George recently, if we were a baseball team, what our positions would be. It was obvious that he was the pitcher and captain. His endlessly patient and supportive wife Cheryl would be the shortstop. “Nothing can ever get past Cheryl,” George said. Susan Yacker, our ace proofreader, would be the closer. And I would be the catcher.

That feels pretty accurate. A catcher returns what the pitcher throws, keeps him in the game, discusses strategy and when necessary tags out anyone trying to ruin the win. And I even have the prerequisite bum knee.

I’m not sure just how I signed onto Team Excelsior. I was a free agent at the time and on the disabled list when I offered to “take a look” at the story of a character George had so lovingly created over nearly 15 years of his life. I knew most of the back story -- both the tragic loss of Matthew and the nuts and bolts of Excelsior himself since George was a part of my writer’s workshop for four terrific years. To say that I was proud of George for pulling it all together in a novel is to damn with faint praise.

So I booked a seat to Denab IV through the Leap of Faith and it’s been quite a ride. As we started discussing what would enrich the book, ideas flowed. Maybe it’s the influence of a woman editor, but a story that began with no female characters suddenly sprouted them everywhere. Plot points were fine-tuned then fine-tuned again until they sang. There were eureka moments that made us both dizzy with elation. It was fun, exhilarating and at times flat out exciting. George is on my short list of favorite writers with whom to work.

Like a lot of ball games, ours went into extra innings. My life got busy and I wasn’t able to devote as much time as I had before, making it difficult for George to meet the deadlines he had set. But he was true blue, never making me ride the bench or bringing in a relief catcher. Thank you, George, for letting me stay in the game.

And now here we are with Excelsior rounding third and heading for home. George is on second, I’m on first and Susan is driving us all home late in the game, batting with her mighty pen and brushing off those last little nasty stray gerunds and adverbs and the mysterious prevalence of the word “still.” I can almost hear the fans chant, “Go! Go!”

What you hold in your hands is two years of love and hard work from Team Excelsior. George has poured heart and soul into this book. To me, it’s a perfect game.

“…and in midst thereof was like an anvil of steel a foot on high, and therein stuck a fair sword naked by the point, and letters there were written in gold about the sword that said thus: Whoso pulleth out this sword of this stone and anvil, is rightwise king born of all England.”
-- Sir Thomas Malory

“…one day, an Autobot shall rise from our ranks, and use the power of the Matrix to light our darkest hour.”
-- Optimus Prime

“What’s he looking at?”
Semminex pressed his forehead against the smooth, cool audirarian metal
cell doo
r
.
Through the one-inch-wide food slot, his eyes sought and found the Krunation guard’s gaze. This one must be new. He paid close attention to the guard’s scaly neck and imagined his hands squeezing.

The guard walked closer to the cell, and Semminex - his eyes still on the Krunation - pulled his arm back and thrust his fist against the door. The bang reverberated through the prison halls and the guard froze in mid-step. Semminex
flexed his fingers and shook off some ash and dirt that covered his hands. The satisfaction of once again unnerving a Krunation overpowered the pain.

"Relax. He's only trying to scare you." Semminex shifted his attention toward the taller, heavier Krunation guard. He recognized this one, bu
t
he refused to know the guard’s name. He refused to know any guard's name. He thought of this one only as Scar, after the long scar running down the left side of his face.

The new guard
peered into Semminex’s cell and inhaled the air emanating from the food slot. “Too bad the force field can’t keep out the stink of these Denarians.”

Semminex grew anxious as he pulled his right arm back, waiting. One step closer, he thought.
The guard stepped forward and Semminex once again gave the door a strong punch. The Krunation rushed for the tazer baton attached to his belt, gritting his razor sharp teeth. Semminex found the new name for the easily rattled guard. Coward.

“It’s too bad he’s been locked in there ever since he was a runt.  I would have tazed him so hard, he wouldn’t have ever been tall enough to look through the opening." Scar
tapped the force field over the opening in the cell door, emitting a small spark.

“What’s so special about this piece of scum?” the coward asked.

“I don’t know. Nocterar’s orders,
”
Sca
r
answered as he grabbed his own tazer. “Come with me.”

Scar and the new guard  turned left and passed another row of cells.  Scar struck his baton on each door and.one painful scream after another of the Denarian prisoners echoed through the halls.

“The metal works as an amplifier,” Scar shouted over the screams. “It keeps them on their best behavior.”

Once they left his eyesight, Semminex crouched down, the bones in his knees cracking, and concentrated on a small hole the size of the Denarian’s hand that lay open to the right of the door. Semminex reached in and his fingers touched a smooth and cool surface. He rubbed his fingertips against the many dents he had already created, sensing the slight vibration emitting from the metal.

The screams of the other Denarian prisoners continued as Scar smacked his tazer baton on another row of doors. Semminex pulled his right hand back, balled it into a fist and punched the metal. Another dent. He pulled his fist back and struck it again,

Semminex punched it again and felt a crack begin to form. A wave of satisfaction washed over his body as he gave the metal another punch, creating another crack. One more should do it, he told himself as he reached back and thrust his fist forward. He exhaled and smiled as he felt the metal cracking again.

The screams outside Semminex’s cell faded into silence. He pulled his arm out of the hole and examined the calluses on his knuckles. They were slightly cracked, but he felt no pain.

Semminex heard the familiar sound of an electronic key card opening a lock, followed by the thick metal cell door sliding upward. He stood up and looked through the opening in his door, hearing Denarian prisoners murmuring to each other. "Radifen. Radifen." The sound rose in volume and Semminex crouched back down in front of the hole. He reached in and ran his fingertips along the newly created cracks, whispering his favorite of Radifen’s blistering sermons.

Waiting in the Shadows by Trish Moran
Unknown by Unknown
Love or Duty by Grieve, Roberta
A Scream in Soho by John G. Brandon
Love After Dark by Marie Force
The Playdate by Louise Millar
The Reveal: A Detectives Seagate and Miner Mystery (Book 6) by Mike Markel
Stiletto Secrets by Bella J.
Fortune's Favorites by Colleen McCullough
Tap Out by Eric Devine