Read Edge of Chaos (Love on the Edge #1) Online 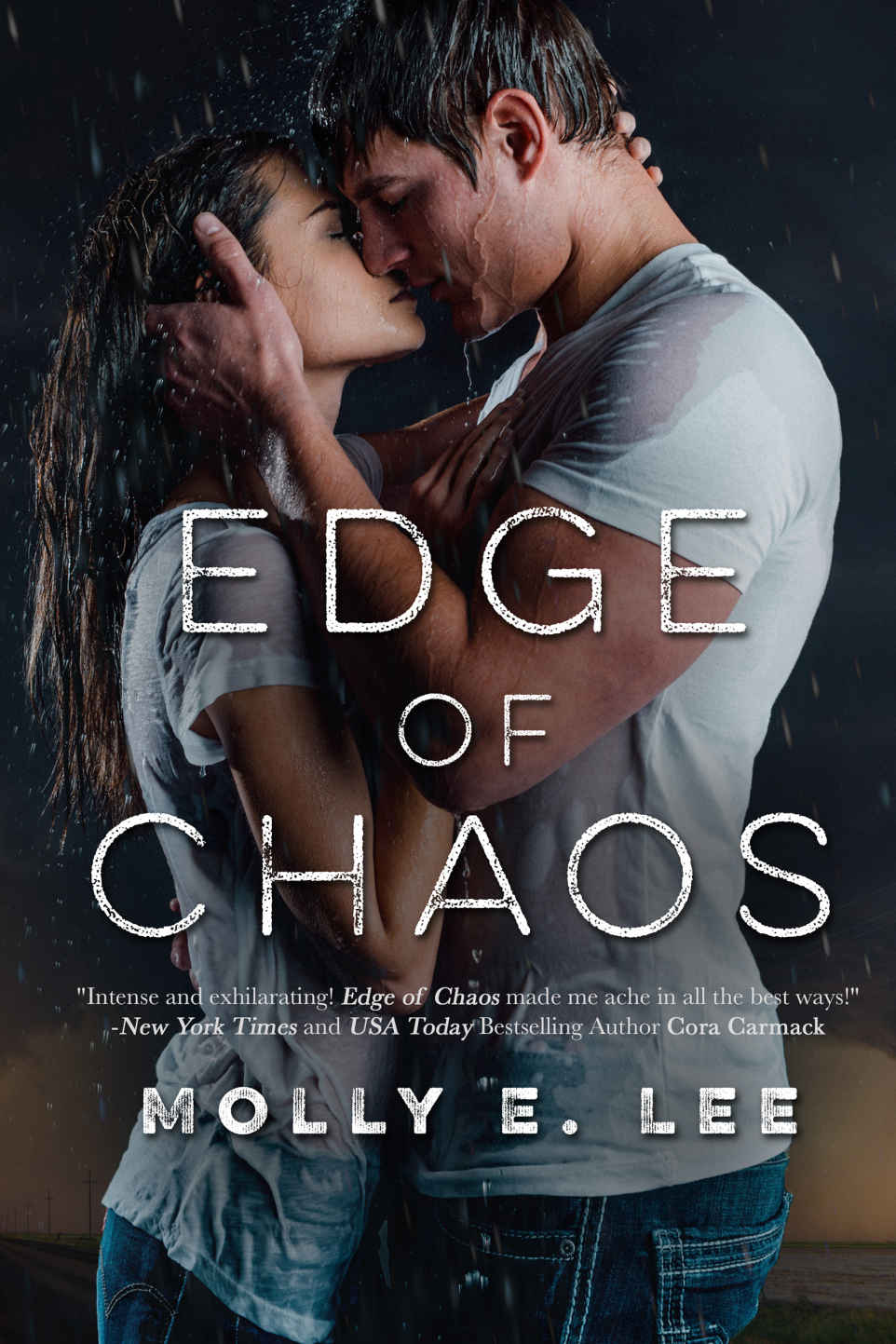 This book or any portion thereof may not be reproduced or used in any manner whatsoever without the express written permission of the publisher except for the use of brief quotations in a book review. This is a work of fiction. Names, characters, businesses, places, events and incidents are either the products of the author’s imagination or used in a fictitious manner. Any resemblance to actual persons, living or dead, or actual events is purely coincidental. This book is licensed for your personal enjoyment only. This book may not be re-sold or given away to other people. If you would like to share this book with another person, please purchase an additional copy for each person you’d like to share it with. Thank you for respecting the author’s work.

Regina Wamba at
Mae I Design

For Daren. The moment I met you I finally started living.

A STORM BREWED
in Justin’s eyes, a ferocity that threatened to shatter everything in my life. He leaned against the wall near the small kitchen with his long arms crossed over his chest, staring at the threadbare carpet like he wanted to set it on fire.

Damn it. I’d been gone
two
minutes. What could’ve happened in the time it took me to check out the closet in the master bedroom to piss him off?

I paused in the hallway and tested the atmosphere. I knew everything about Justin, had every look memorized. His ultra-short black buzzed hair, brown eyes, and trimmed goatee usually conveyed a mysterious charm, but when he shaped his face the way he was now, I knew we were only minutes from a blowup. He probably would’ve already erupted—what about, I still didn’t understand—if the apartment leasing agent wasn’t standing a few feet away in the kitchen pretending to go through paperwork.

I sighed and racked my brain. He’d been quiet on the drive out here, sure, but nothing indicated he was angry. Only two months until my freshman year of college and this apartment was one of the most popular among Tulsa students. We jumped at the opportunity to snag a place so near campus—well, I jumped, Justin kind of strolled.

Two things in my life were certain.

One, I would attend the University of Tulsa. My mother had attended, and all my friends had been accepted and were picking out dorm rooms or apartments, too. I hadn’t even applied anywhere else because it just wasn’t an option.

“Will you put the deposit down today?” The leasing agent, a blonde woman in a black skirt and blue blouse, asked, and grounded me to the present.

My eyes shot to Justin. He was a statue except for his clenching jaw. My heart plummeted into my stomach, stirring up the two Dunkin Donuts I’d eaten for breakfast.

I swallowed. “Could we have a minute to talk, please?”

“Of course.” The agent walked toward the front door. “I’ll just leave this folder here for you. It includes the floor plan, estimated water and electric, and the rent is listed at the bottom.”

“Thank you,” I said as she shut the front door.

The tension in the air mounted. I was so familiar with the sensation. A rough texture, like choking down a Brillo pad. A signature Justin blowup would occur in the next five minutes—he merely waited for me to initiate it, as was his pattern. After years of these, I’d almost rather eat the Brillo pad.

“What’s up, Justin?” I decided to mirror him and took up my own firm lean against the opposite wall, but opted to put my hands on my hips as opposed to crossing them over my chest.

He finally looked at me, the fuse lit. His brown eyes were sharp enough to cut me as he shrugged, the motion rippling the muscles in his arms.

My heart rate kicked up. A silent start was way worse than an instant outburst.

“Seriously, what is it?” I kept my voice even, not wanting to fan the flames.

He clenched his jaw again, and I almost lost it. I’d been tiring of these blowups for a while now, but I assumed once we lived together they would stop. He’d be happier.

Justin uncrossed his arms and took two strides to the kitchen, flipping open the folder the leasing agent had left on the counter. He scanned the papers and shook his head before meeting my gaze again.

“This is ridiculous,” he said.

“What is? The rent? It’s very reasonable considering how close it is to campus, and you know it’ll be good for me to be able to walk to class.”

I opened my mouth to respond, but the air caught in my lungs. He had a stack of job applications in my car. We’d picked them up while waiting for the apartment office to open. There were over ten mechanic positions available in town, and two of the managers had even said they were interested in seeing what he could do.

“I thought . . .” He’d been excited about the prospect of getting our own place. Finally living together after all these years. He’d said he was looking forward to the move, a fresh start.

“Yeah,
you
thought. Why’d you have to pick a college that is so far away, huh? Why should I have to leave my friends because you suck at picking schools?”

“Are you serious? It’s only two hours away! It’s not like I’m asking you to move to Canada.” I rolled my eyes.

Justin slammed his fist against the countertop, making me jump.

Tears formed behind my eyes, but I didn’t let them drop. I’d seen him more pissed off than this—at least he wasn’t drunk. Something would’ve already been broken if he was.

He shook his head. “I’m not doing this. I’ve got a good job back home. There is no point in me moving here.”

A knife slipped into my chest, his words searing.

He absolutely hated his job. Complained about it on almost an hourly basis—called it mindless factory work. “I thought your dream was to work on cars? There is plenty of opportunity for that here.”

He walked across the living room, and his six-foot-three frame towered over me. “I will do that, someday. But never here.”

I looked up, searching for the man I thought he was, the man I knew he could be if he wanted to. He didn’t reach out to me even though he stood only inches away.

“I’ve always wanted to go to school here. You’ve known that since you met me.”

“Are you scared of the change? Because that’s understandable. We’ve lived in the same town our entire lives, but this will be an experience for both of us.” I tried to touch him, but he flinched away, branding me with a menacing look that made me regret asking.

“I don’t know why I let this idea go on this long. I’m not moving. End of story.”

“You’re making me choose between my future and you?”

“Your future? You don’t even know what you want to do with your life. You honestly think you’re ready to be on your own? You can’t even pick a major!”

“I don’t have to decide right this second,” I said. “There’s time to explore.”

Justin rolled his eyes. “You don’t have a clue what it’s like out in the real world. When I was sixteen I was already supporting myself.” He said it like he had decades-worth of experience over me.

Tears finally trailed down my cheeks, the pressure of the world building around me like a supercell.

“Please don’t do this. Don’t make me choose.”

“Are you really going to throw away our relationship for a bullshit school? Abandon me the same way everyone else has?”

“I . . .” The words stuck in my throat, my heart breaking at his mention of abandonment. The word triggered a memory, one I’d tried to bury but never really could.

“You’re an incompetent bitch!” my father screamed at my mother from the dining room. Five seconds later came the shatter of glass. It sounded like Dad had knocked a serving dish off the dining room table.

We’d only made it halfway through dinner before I’d lost my appetite and bolted to my room.

“You’re a selfish bastard!” my mom shouted back.

Grabbing the phone, I called Justin in a panic.

“Justin, can you come get me please?” I’d asked when he’d answered the phone at his aunt and uncle’s. Having a sixteen-year-old boyfriend when I was only thirteen made my parents crazy, but the fact that he could drive was a sweet perk at times like this.

“Please? I’m losing it over here. If I hear one more dish break, I’m going to slam my head into a wall,” I said, shutting my bedroom door to prevent him from hearing the fight going on just outside it.

He sighed, his hesitance evident in the weight of it.

“You don’t give a damn about either of us!” My mother’s muffled yell came through my closed door.

A part-groan-part-cry ripped from my throat.

I tossed the cordless phone on my bed and wiped the tears from my face, counting the seconds until he arrived. I met him in the driveway, not giving my parents the chance to see him, not that they even bothered to look.

He wrapped his arms around me. He smelled like leather and spice, and instantly his nearness lifted the boulder on my chest. He glanced down at me, smiling. “How about a movie?”

Murder at the High School Reunion by Steve Demaree
Good in Bed by Jennifer Weiner
Half in Love with Artful Death by Bill Crider
The Scattered and the Dead (Book 1): A Post-Apocalyptic Series by Tim McBain, L.T. Vargus
Some Are Sicker Than Others by Andrew Seaward
LATCH by LK Collins
Switched at Birth: The True Story of a Mother's Journey by Kennish, Kathryn, ABC Family,
Phoenix Rising: by William W. Johnstone
Simple Arrangement by McKenna Jeffries
The Girls From Corona Del Mar by Rufi Thorpe