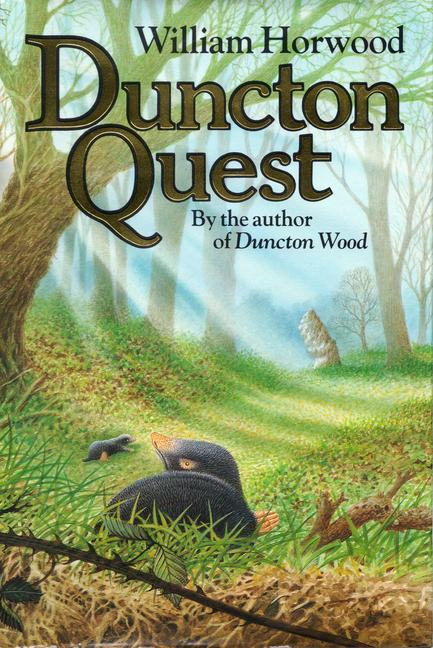 Part Two of the Duncton Chronicles

First published in Great Britain in 1988 by

Printed in Great Britain by Mackavs of Chatham

T
HE
C
OMING
OF
THE
S
TONE
M
OLE

Tryfan was born of Bracken and Rebecca, whose tale is the first part of Duncton’s history. The great task that they began, which was to show allmole the Silence of the Stone, bold Try fan now continues.

For he grew to have faith and strength, and was entrusted with the task of accompanying old Boswell, holy mole, White Mole, safely back to the Holy Burrows of Uffington. And with Boswell to take the seventh Stillstone, the last one, to its rightful place so that the true silence of the Stone might be heard. So they set off from Duncton Wood in hope and faith.

But even as they left, the chill winds of the Word were already spreading across the land, whispering falseness to the weak, giving corrupt succour to the lonely, confusing the minds of the lazy, filling the void in the hearts of the faithless, offering power to the clever and astute.

With the coming of the Word shadows lengthened over moledom, faster and deeper, engulfing even Uffington, and it became lone Try fan’s great and terrible task to lead those few who had the strength on a quest to protect the light and silence of the Stone against the shadows and the corrupted ones who came.

Few moles to the many, and led by one who held no power but that which comes from a spirit of truth and love. One who was hunted and reviled, cast out and punished. One whom the very Stone itself seemed to wish to crush to nothingness.

This book is Tryfan’s story and tells how the Stone demanded of him a courage, a purpose and a faith rarely wreaked of anymole. It tells of how Try fan became the greatest scribemole of his time, and of how his work, his loyalty and his love prepared the ground for the coming of one who could call out to all moles from the Silence, that they might know what it was that Tryfan and his followers had sought with such courage.

So all you who once made a blessing upon Bracken and his Rebecca, share now in a petition for their son Tryfan; watch over him through the light and darkness of his journeying; help him with your love, and pray that he may return home at last, safeguarded.

March; and a cold north wind blew across the scarps and vales of Southern England, scurrying old leaves under hedgerows and into the newly opened entrances of tunnel and burrow. It tore at tree-buds and flurried the black feathers of sheltering rook. It whipped the stiff dead winter grass, and flayed the bare soil of ploughed fields. The land seemed withered, and all on it huddled miserably, waiting for change.

Among the rising heights of the grey beeches of the small copse which stands near the eastern foot of the great scarp of Uffington wherein the Holy Burrows lie, that same wind twisted and turned in the leafless branches, then whined low among the surface roots, sending a shiver to the snout and a shiver to the heart of any creature that might be hiding there. Like vole or squirrel, fox or subtle stoat.

Two moles crouched in the poor shelter of a beech tree’s surface roots, silent and close. One was Tryfan
*
, son of Rebecca and Bracken. His full dark fur had a hint of the beauty and strength that had been his mother’s; his eyes and stance had the purpose and courage that had taken his father far, far from Duncton Wood and back again, through danger to body and spirit into a final silence with his mate which all moles desire. Yet Try fan was still young and his stance had the impatience and uncertainty of youth, and he held his talons tensely as if expecting attack.

The second mole was old Boswell, most revered and mysterious of all the scribemoles of Uffington, finder of the seventh Stillstone. In all the annals of moledom, none has more honour than him. His name was spoken – will always be spoken – with reverence, and to this day many a mole touches his left paw with his right when a storyteller first mentions the name Boswell. For he was crippled as a youngster and lived his life lame, and for this reason needed help and protection on his journeys as a scribe-mole. By the time Tryfan first knew him, which was in Rebecca and Bracken’s final days in Duncton Wood, Boswell was old indeed, his face lined and, in repose, weary. But his eyes were ever full of care and love, and when he was comfortable and had fed, then he would smile and look about him with the eagerness of a pup; and when he spoke his voice was gentle and unhurried, as if time itself waited on him.