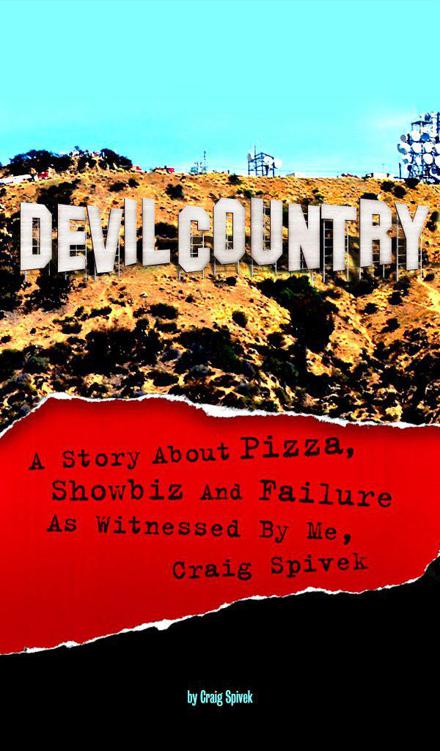 Thank
you to all friends and family.  I am what I am because of you.  Thus,
you are to blame.  Thank you to Los Angeles, in particular the San
Fernando Valley where I was born, bred and raised.  We’ve had our
differences in the past, but you’re all right in my book.

Special
Thank you to:

I
grew up in L.A.  I’ve been around showbiz crap my whole life. It is my
scenery, my environment, and as you’ll soon discover, the language I speak.
Famous people are part of that vernacular.  What people need to
realize is that L.A., and more important the San Fernando Valley, my home, is a
real place with decent folk in it, and I
am honored to have
been born and
raised here.  Between showbiz and the Camaro plant
that used to be on Van Nuys Boulevard, the Valley was a pretty crucial part of
the American experience.  I wish people would stop blaming my town for the
rotten things some of the people who live here have said and done. Not my fault
a bunch of jerks moved in, gridlocked the freeways, and created some crappy
films. So back off.

Still, I am
grateful to showbiz for being the one industry still functioning within the Los
Angeles landscape.  In the January 2012 issue of Esquire George Clooney said,
“Hollywood still makes things. We still export a couple billion dollars’ worth
of product overseas.
Original new product.
Some people might not agree that it’s original or new, but basically it
is.  There aren’t a whole lot of industries that are exporting things
right now--big time with big money.”  Clooney’s statement suggests that
Los Angeles is still a relevant functioning city to live in.
Perhaps now more than ever.
And God bless the Clooney,
just for being the Clooney, y’know?
Ain’t
that
guy awesome?

Writing this story helped me cope with growing up here, as
well as helping me cope with a lot of the things I experienced in my city and
in my home, including being raised by two wonderful, yet insane, Jewish people
whom I love with all my heart and soul.  L.A is a place people make
pilgrimage to from all over the world to seek their fortune.  I’ve always
had a firm respect for that, so to all travelers I bid you welcome.  This
story I hope grants you, dear reader, a different perspective on what it means
to have been born and raised inside the Mecca that you have chosen to make
pilgrimage.  It is known as Los Angeles.
The City
of Angels.

Home of showbiz--and Mexicans.
God bless the Mexicans and all Latinos.  I would be thrilled if you
guys would let me in your club.  Seriously.  You get shit done.
Therefore this book is humbly dedicated to you guys as well as to all of
those who have struggled in their attempt to gain a foothold within any aspect
of the Hollywood empire. It is your struggle that acted as the impetus for this
book.  It is also dedicated to those on the fringes who struggle mentally
with the visions that populate the stories Hollywood chooses to tell.

So, anyone who sees... anyone who listens... anyone who
tries... anyone who shows respect for those who try... and most importantly
anyone with a vision, this book is for you.  If you are not one of these
persons that’s okay, just enjoy it, but if you are someone who places judgments
upon those blessed with sight, well, I’m not worried, you’ll never read any of
this anyways.


“...
most
rock
and roll has no information content in it and the basic function of it is to
provide wallpaper to your lifestyle and our music is different from that.”

Frank
Zappa - From some TV interview.

“Brad
Pitt could have been strolling past but it didn’t matter, I was the one with a
pizza.”

I
see a blindfold over Carin’s eyes. Her pretty brown eyes have disappeared
behind black

fabric
, which is crunching down her
hair.
That beautiful hair.
For a second, then gone.

The vision doctors call “mania” and subdue with
medicine. I was being guided. I

knew
not to fight it.  I was
to study it.
Like the entomologist who guest hosts on
Wild
America.
“Ants live in colonies, cockroaches live in walls, and
actors live in L.A.” Tools of the trade would be my
car
.
A gray 1980 Honda Accord hatchback I had inherited from my grandma when
she got too old to drive. I am a refugee.  I kept repeating the part about
being a refugee.
And the cockroaches.
“Just be cool,
button your shirt,
try not to drool…man
I’m so wasted.
That meter maid has some serious tits.”  Mumbling to myself a poorly
worded mantra as I pulled up to The Big Pizza, running on fumes, not a dime in
my pocket.
A shimmering Mecca of golden light and pizza
grease.
Magnificent!  It used to be
a dry
cleaners
, but they had to shut it down and remove the asbestos.  It
was midday when I entered
;
having just missed the
lunch rush.  I walked in, the lone wanderer making his entrance.  I
wished I had been smoking a rolled cigarette and wearing a serape.  I
tried to click my sneakers hoping for spurs.  All I got were squeaks.
I noticed in a dusty corner a cockroach humping a spider.  “Notice
the way his trapezoidal pelvis glides back and forth like a pulley on a string
as he penetrates his mate…
”
Although disturbed
by this abomination of nature, I wished them good blessings and moved on.

When I walked in I was overwhelmed. Tables
needed cleaning from the lunch rush. Sunlight shone in from the back windows
and bounced off the black and white hexagonal floor tile.  The interior
was sparsely decorated with pictures of Carin on the walls.  Portraits,
more pictures of her on movie sets, De Niro, Scorsese, Coppola, Rourke,
Stallone, Stone, Charlie Sheen, (pre-meltdown), Robert Downey Jr. (post-crack),
laughing, mugging, candid.
Signed headshots from every
New York actor around.

Posters of all her films.

Plenty of red tablecloths, red pepper shakers,
spaghetti and meatball stains, pizza grease, a big white counter with black and
white tiles, salt and pepper shakers, an Elvis statue painted like a member of
the KISS Army on top of a soda fridge, and graffiti that read “Tommy Sucks
Ass”.  Craploads of signed dollar bills on the exhaust overhang.
Scattered people eating quietly.
Gut-wrenchingly awful
top-forty coming out of a pint-sized boom box underneath the counter, and a
small TV with a coat hanger for an antenna tuned into an afternoon talk show that
would soon be cancelled.  Bottled water, Pellegrino, ranch dressing
available on request.  The pizza was ultra-thin with a soft texture.
Heavy cheese, plain, a little
parmesan
, heated
but not hot.  Slices available until the store closed,
then
thrown away at the end of the night and picked-through by the Beverly Hills
Zombies.  You could never hand the old slices directly to the homeless, so
they would wait.  Patiently.

The oven swung open; the register looked blurry
as the heat bent the air. The cook squinted his eyes as he shoved an uncooked
pizza with pepperoni and sausage inside, his muscles rippling and tightening
like Hephaestus stoking the fires of the Underworld. He turned around and
slammed the door shut with the giant pizza spatula, which he threw aside and
went back to pushing out dough for the next victim. He threw flour over it to
soften it up and started to mold it with both hands. He glanced up briefly at
me as I heard him whisper to the other cook in Spanish,
“Que es el
pendecho?”
which means, “Who is that darned person?”  A customer
approached the register, and he waltzed gracefully over to her and took her
order, rang her up, and in perfectly accented English said, “Yes, ma’am,
that’ll be $5.50.  Debit or Credit?”  This was Geraldo.  My interview
lasted a whole five seconds.  Geraldo looked me over briefly, said “okay,”
didn’t ask for a driver’s license or insurance.  Nothing.   They
gave me everything.
Money for gas, money to make change, a
free slice of pizza, a soda.
The last place I had worked made me
pee into a cup, wear a shitty uniform and suck corporate cock.  This was
something else entirely. He told me to come back at five for the dinner rush.
It was like they had been expecting me.  If I survived it, I was in.  I
returned promptly at five.  I survived.

I
had been driving off and on for two years.  It all started at Mariano’s.
A fine Italian restaurant that had seating, as well as take-out and
delivery, not to mention a full array of domestic and imported beers.
Banquet seating was available.  They also served a damn good slice.
I went there one time on a date with Rachel Abramsberg, a woman I loved
who was studying to be a rabbi.  We had met earlier that year while counselors
at Jew Camp. She was one of the bosses.  I found her use of power to be
impressive.  She was firm but never holier than thou.  She had a huge
poster of Theodore Herzl tacked to her wall.  It stared down at us as we
chatted well into the night on her
bunk-bed
about
Zionism, Kosher veganism and Zero Mostel’s career. When camp ended we decided
to meet outside of the campgrounds.  Adam and Eve evicted.  We met up
and journeyed to Mariano’s.  Two kosher refugees seeking safe harbor.
Even just for a night.

We
sat in a darkly-lit booth in the back, sipped wine, split a pizza, laughed,
caressed each other’s hands, smiled and stared into each other’s eyes.
I’d never experienced this before: Love, as well as a desire to spread
the legs of someone intended to spread God’s holy word across the Diaspora.
So that night, after pizza, some wine, and a Helena Bonham-Carter movie,
I decided to bump our relationship up to the next level.  I finger-gunned
Rachel Abramsberg in her bedroom, in her West Los Angeles apartment, drunk on
passion
;
pizza-breath and all.