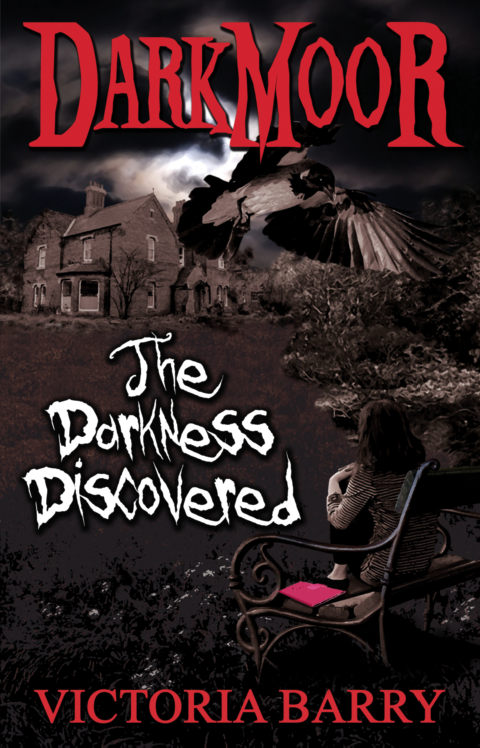 The moral right of the author has been
asserted.

Apart from any fair dealing for the purposes of research or private study,

or criticism or review, as permitted under the Copyright, Designs and Patents

Act 1988, this publication may only be reproduced, stored or transmitted, in

any form or by any means, with the prior permission in writing of the

publishers, or in the case of reprographic reproduction in accordance with

the terms of licences issued by the Copyright Licensing Agency. Enquiries

concerning reproduction outside those terms should be sent to the publishers.

A catalogue record for this book is available from the British Library.

Matador
is an imprint of Troubador Publishing Ltd

And for my husband, thank you for being you

Catherine sat gazing across the road her eyes transfixed on number 21,
the Old Vicarage, which had stood empty for years. There was no escaping it as her front yard overlooked the decrepit ancient building. Perching herself a little higher on the old rickety wooden bench, the vicarage sent shivers down her spine. Somehow, Catherine was intrigued by its mystical charm.

‘It’s so beautiful,’ Catherine thought to herself as the sunlight smiled upon it.

The history of that old Victorian vicarage was still a mystery to this day. Screams and painful wailings were often reported to erupt out of its sash windows and echo throughout the village, leaving the people of Filius fearful and suspicious about the Vicarage’s dark past.

Buried underneath a carpet of ivy, the old ruin stood all alone on the west side of Acerbus Road. A row of terraced houses occupied the east side and swept around like a fort protecting its castle.

Although it had been left lifeless by all humanity it did, however, have one inhabitant, Clever Crow.

As Catherine’s dad always quoted, “If men had wings and bore black features few of them would be clever enough to be crows.”

The crow had occupied number 21 for over ten years, and had somehow become tolerant of its ghostly surrounding’s. Clever Crow would trick innocent animals to come and play with him, but then would cruelly have them for his dinner. He seemed to feast on the fear of the other animals and when their bodies started to decay the crow would still go on devouring their skeletal remains.

Catherine would watch the crow for hours and she was convinced that he was watching her too. He positioned himself high upon the chimney stack just like one of the Queen’s guards, guarding his own castle. His pure silky black coat shone majestically in the evening sun leaving Catherine completely bedazzled.

Unfortunately for Clever Crow, he was about to have his fortress invaded. The Old Vicarage, which had been left derelict and lifeless for over a decade, was about to be resurrected back to life.

As the sun died down from view, Clever Crow stretched out his mighty wings and flew gracefully out of sight. Crow was gone.

“Cathy! Cathy! Come on darling, your supper’s on the table,” Catherine’s mum called.

The smell of fish and chips greeted her as she headed through the lounge and into the kitchen. Friday night was chippy night which Catherine relished.

“He has to work late darling, but never mind, his loss,” her mum replied softly.

Sitting down to eat supper together Catherine’s mum asked, “What were you doing outside? Watching that flipping crow I bet?”

Catherine turned towards her mum and smiled.

“Mother, why ask if you already know?” Catherine remarked sarcastically.

“Because, my darling daughter, you’re becoming increasingly obsessed with that bird. Anyway, you do know the new neighbours are moving in tomorrow?”

“Yes of course I do. Everyone in Filius and beyond is talking about it. You never know they might have a house warming, so then we could.” Before Catherine could finish, her mum abruptly interrupted, “No Catherine. You’re never to visit that house, never. Do you understand, Catherine?”

“No, Catherine. Have you not seen the latest poster?” Mum asked placing the glossy paper on the table which read,

HAVE YOU SEEN THEM?

They were last seen playing together on Acerbus Road, Filius.

If you have any information regarding the disappearance of the two children, please contact the local police on 01276 21 34 65.

Reading it sent a shiver through Catherine. The words started to blur as Catherine stared hard at the printed text.

“I don’t know if that place has anything to do with the missing children, but I don’t want you over there. And besides, all those horrible sounds that use to come out of there,” Mum lowered her voice, “it’s not a nice place please promise me, Catherine?”

With both their hazel eyes locked together, Catherine sensed the unexplainable fear which her mum had towards the vicarage. Taking a deep breath, Catherine conceded.

“Ok, ok I promise I won’t go anywhere near the Old Vicarage, or speak of it again.”

After finishing dinner, Catherine left her mum watching the television and went to her bedroom. Catherine listened to some music on her mp3 player hoping it would take her mind of the vicarage.

“Don’t step foot in there, Catherine,” she squeaked mimicking her mum.

“As if it was haunted or something, it’s just a house.”

Besides, Catherine was too inquisitive. She would have to find out who was moving in to such a ‘strange’ house. And of course, it was her duty she had to make sure the clever crow was still there, if nothing else.

From underneath her pillow Catherine pulled out her diary and sat down on the edge of her bed. She had written in it every day since her eighth birthday, and it was her most treasured possession.

Have had a good day today, I’ve been to school and we played netball at dinner time. I also had Art which was brilliant because we got to use a potter’s wheel. Although somehow, I ended up getting some of the clay into my hair! Yuk, it was horrible trying to get it out. Emma couldn’t keep her clay on the wheel, lol!

Dad worked late again. Been doing that a lot recently, oh well, must just have lots of work to do, Mum doesn’t seem bothered.

I am well excited to get new neighbours moving into the vicarage tomorrow, can’t wait! Wonder who it’s going to be? Must be a family, the place is to big for one person.

Mum went ballistic when I mentioned about going over to meet them, said I had to promise her not to go in. She forgets I am 10! Been waiting for ages to have a nosey round.

I love the Old Vicarage and that funny old crow. I feel happy, but sad. Happy someone is moving in, but sad because I always thought one day I would live there, somehow.

Anyway going to go now and get some sleep, big day tomorrow and I want to look my best.

Catherine closed her diary and placed it back beneath her pillow. The pink leather bound book was starting to age, but Catherine didn’t mind. It was the one place she could be herself and truly express her feelings, it was her best friend.

Once she was ready for bed she switched off her light. The moon was still aglow in her bedroom, allowing her to have one final peep at the old Victorian vicarage.

Although her mum had overreacted earlier she was right about one thing. Catherine was obsessed with that unexplainable building. It had a grip over her that she could not break free of, and it pained her to think that after tomorrow it might never look the same again.

With that thought her eyes began to fill with tears. Catherine always thought that it would be her that would one day inject zest back into the old building.

Catherine awoke to the sound of her mum’s voice bellowing throughout the house. She quickly jumped out of bed and lay quietly on the floor. Pressing her ear into the carpet, she just about made out what her parents were saying.

“What do you mean you have to go into work? For goodness sake, Pete it’s Saturday, you never work Saturdays,” her mum’s voice was not the usual soft tone Catherine was used to, but more stern.

“I know,” her dad’s voice began, “But it’s just a one off, if I get my work done today, then I can be off tomorrow and Monday with you and Cathy, don’t be mad love,” Catherine’s dad said calmly trying to restore peace.

“Don’t be mad,” her mum said having none of it. “Don’t be mad he says, oh I’m not mad dear, I’m flaming fuming!” Catherine’s heart sunk in her chest and her stomach began to churn.

Peeling herself up from the floor, Catherine had heard enough and headed off downstairs.

Noticing Catherine stood in the doorway they both stopped talking and almost in sequence smiled at her.

“Morning love, did you sleep well?” her dad asked sitting himself down at the table.

Amazed at the fact they were both acting like nothing had happened, Catherine answered, “Yeah fine thanks, you?”

“Yeah I did once I finally got home,” he said accompanied by a nervous chuckle.

His cheeky comment had only made Catherine’s mum even angrier.

“Yes and your Father has got to go back into work again today! Don’t you dear? Anyone would think with all this extra work on you were having an affair!”

“What?” Dad repeated in astonishment at the accusation.

Catherine looked at her mum sharply, trying to digest her words. A lump formed in Catherine’s throat as she just about managed to ask, “Are you?”

He too was now enraged as he rose to his feet, “No I’m flaming not! How could you think that, Julie?” her dad’s voice filled the air around them as Catherine’s mum turned her back on him. With no explanation to offer him, an awkward silence descended around the three of them.

Only the sound of breathing could be heard for what seemed like an eternity, and Catherine didn’t know what to say. She stood frozen to her spot longing for something to break the silence, but nothing until,

Catherine’s parents sat themselves back down at the table with only the sound of munching to be heard.

Hearing the beeping once more, Catherine turned to look out of the window and asked, “Who’s being noisy?”

“It will probably be the new folk moving into number 21,” her dad answered chomping on his cornflakes.

“Of course, it’s today,” Catherine remarked. “I can’t believe I forgot,” she shouted with excitement.

Darting back through the kitchen, then the lounge and finally up the stairs to her bedroom.

“What about your breakfast?” her mum shouted after her.

“Breakfast can wait!” Catherine called back as the excitement spilled out of her.

“Who are the people moving into
MY
house?”

Ancient World 02 - Raiders of the Nile by Saylor, Steven
One Wish Away by Kelley Lynn
Butterfly's Child by Angela Davis-Gardner
The Heirs of Owain Glyndwr by Peter Murphy
Delta: Retribution by Cristin Harber
Sarah’s Billionaire Doms by Angelique Voisen
Waiting for Her Soldier by Cassie Laurent
Abysm by G. S. Jennsen
Mothers and Other Liars by Amy Bourret
Person of Interest (A Celeste Eagan Mystery) by Emery Harper