Read Falling For Her Bodyguard: A BWWM Suspense Romance Online

Falling For Her Bodyguard: A BWWM Suspense Romance 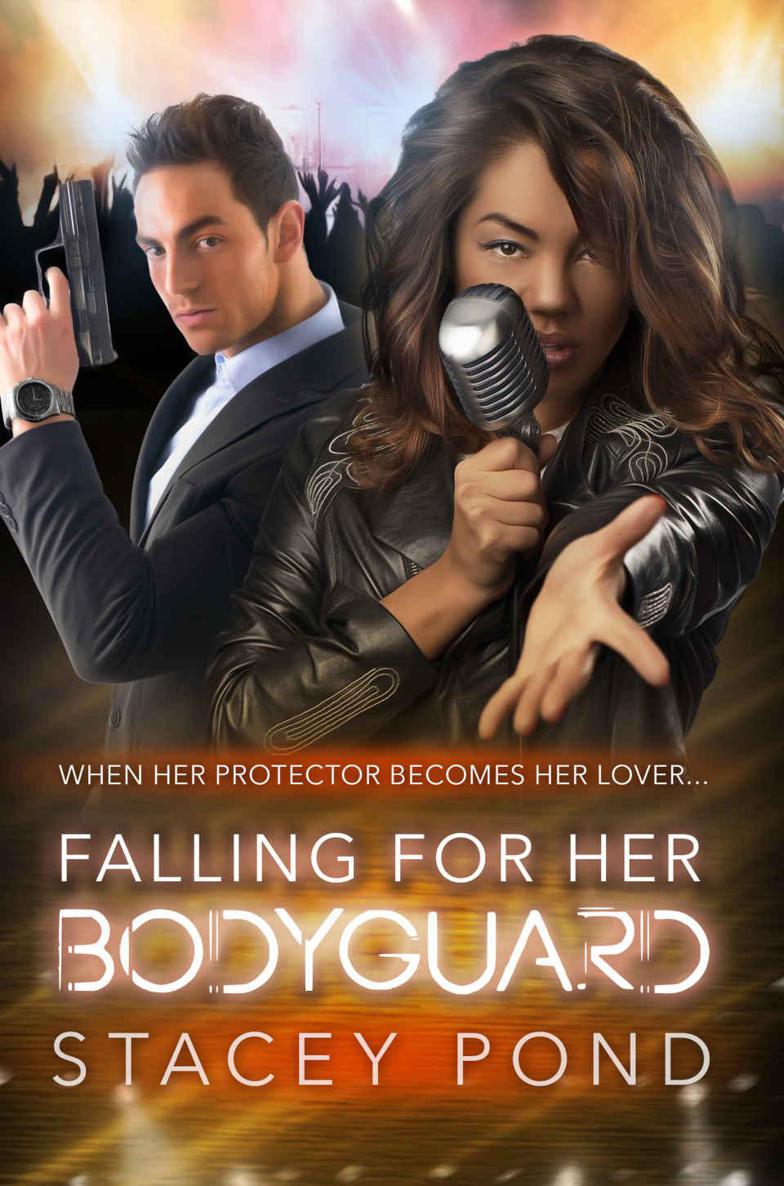 Falling
For Her Bodyguard
When her protector becomes her lover...

A complete
story, brought to you by best selling author Stacey Pond from BWWM
Club.

Kenzie is
a worldwide singing sensation.

But while
she packs out stadiums and is adored by many the world over, not
everyone is a fan.

After
being brutally attacked one night after a show, Kenzie is put in a
month long coma and subconsciously battles for her life.

When she
wakes, she discovers her attacker is still on the lose, and is stuck
with a team of bodyguards tasked with shadowing her every move.

One of
these guards is Gianni; a kind, smart and drop-dead gorgeous man who
can switch to butt whooping mode in a split second.

After
spending time together, Kenzie can't deny she finds him attractive,
and soon their relationship shoots from professional to romantic.

Now
with a c
onstant threat on her life and her new relationship
with Gianni developing, can Kenzie get her career back to where it
once was?

Or will
her attacker get to her again before help can arrive?

Find out
in this new romance (with a suspense element) by best selling author
Stacey Pond.

Suitable for over 18s only due to hot sex scenes between a curvy
singing diva and a hunky and powerful bodyguard.

Get Another Contemporary And BWWM eBook Free!

Hi
there. As a special thank you for buying this ebook, for a limited
time I want to send you another two completely
free
of charge
directly
to your email! You can get it by clicking the cover below or
going
here
:

These
books are so exclusive you can't even buy them. When you download
them I'll also send you updates when new books like this are
available.

Copyright
©
2015 to Stacey Pond and SaucyRomanceBooks.com. No part of this book
can be copied or distributed without written permission from the
above copyright holders.

Get
Another BWWM And Contemporary Ebook Free

Kenzie’s eyes
were closed, but she could feel all of the eyes on her. The lights
beat down on her, feeling like desert heat. A tight purple and black
corset made her shape even more pronounced. The tight pants, tall
boots were her signature. Long, black hair ran over her shoulders.
She could feel the nervousness rush away to be replaced with elation.
It was time to put on a show.

She opened her brown
eyes, took in the crowd. The stadium was full. As a grin slipped onto
her lips, the concert goers screamed. Kenzie raised an arm, the
jewelry shifting down her arm as she did. The screams became even
louder. She loved this part. Loved the seconds right before the
performance when they ate from the palm of her hands, when the
cheering felt like the only thing she needed to survive. Her left
hand raised the microphone to her lips.

Kenzie’s right
hand dropped. The music started. She was alive. She walked across the
stage, the lyrics pouring from her lips easily. They called her the
pop-rock princess. The punk primadonna. She was bringing back music
in a whole new way. None of that mattered to Kenzie. She lived only
for the feeling she got when she began to sing.

As the concert started
coming to a close, Kenzie felt that longing feeling she so often got
when it was time to stop. She just wanted to go on forever. As usual,
she’d gone over her two hour time frame. Her manager was
standing offstage, clipboard in hand, tapping his foot and the screen
of his phone. It was time to start packing up. Kenzie finished the
song, the last of the lyrics struggling to break free.

As she waved, the
crowd went crazy. Just for her. The butterflies returned to the pit
of her stomach. She was pretty sure there was nothing that compared
to that feeling. As she walked off of the stage, she smiled. As much
as she hated to see it end, she had to admit that she was tired. The
first thought on her mind was heading back to the hotel and soaking
in the world’s hottest bath. First, there were meet and greets.
It was another part of the night she enjoyed. Signing autographs,
kissing cheeks, taking pictures. First, she had to retouch her makeup
though.

Kenzie pushed inside
the room that had been set up for her. Soft light filled it up. She
sat down on a chair in front of the vanity. Her makeup was still laid
out earlier from Fiona. Kenzie slipped a piece of gum into her mouth
before she started applying her makeup again. Out of the corner of
her eye, she saw a brief flurry of movement. She turned in her seat.
The room was empty. She sighed.

“I swear, after
show come down is like detoxing from drugs.”

When her makeup was
back in place she decided to loosen her corset a bit. She would throw
a jacket over it so no one could tell, but she was beginning to feel
like breathing might be an issue in a very short frame of time. Her
hands brushed over her smooth, brown skin as she loosed the strings.
A sigh of relief filled the room. Better.

Kenzie turned in time
to see someone step up to her in one smooth motion. She stumbled
back. She could barely make out the man’s face. Partly because
of the hood, mostly because of the shining silver knife he held in
his hand. She took another step back towards the door.

Kenzie stopped. Her
heart rose up to her throat. She was trembling all over, unable to
control her rapid breathing. The man was smiling. Blond hair peaked
out from beneath his gray hood.

“Well, let’s
see. I’ve written to you dozen of times, telling you how much I
love you. And you, you’ve ignored every last one of those
letters, Kenzie. Do you remember who I am at all?”

Kenzie’s mind
was reeling. It was impossible to tell who was who anymore as far as
her fans. She received thousands of emails, letters, presents every
month from fans. However, she didn’t want to tell this guy that
he was just a speck in the crowd.

“O-of course I
do. It’s just that I’ve been really busy. You know,
touring and stuff.”

The man laughed.
“Bullshit. You don’t know who I am. I know you’re
going to die though. Maybe you should have been a little less
self-absorbed.”

The man rushed at her,
but Kenzie threw herself from his path. Her ribs banged against a
dresser, the wind slipping from her body. Her fingers clutched the
dresser as she tried to pull herself up, tried to breathe. She felt
him work his hand into her hair. The man slammed her head against the
dresser, hard. She went dizzy, felt blood trickle from the wound.
Kenzie cried out before he slapped a hand over her mouth. Her gaze
fell to the floor where the knife lay. Only thinking about living,
she threw her head back into his nose. She heard a crack. It was
enough to make him let her go. The pain in her head intensified.

Kenzie dove for the
knife, the tears filling her eyes made her vision hazy. Her hand
curled around the handle of it, but he was dragging her back by her
ankle. He kicked his boot into her stomach. Kenzie doubled over from
the pain, her breathing ragged. As she forced herself to think
clearly, to escape, she felt it. It was white, hot pain filling her
up, her voice had torn from her throat, the scream deafening even to
her. She pressed a hand against the wound. Blood covered her hand.
There was the rushing sounds of footsteps, yelling, screaming. Kenzie
felt the world slipping away.

I’ve never
passed out before. I wonder if that’s what this is or if I’m
dying?

She tried to keep
herself awake, but it wasn’t working. She wondered when the
door had been opened. People poured into the room around her. Someone
pressed down on the knife wound, hard. There were too many faces, too
many voices. She couldn’t tell who was who. It was too much.
She drew in a shuddering breath before her eyes closed.

Kenzie woke up to
bright lights. After being in the darkness for what felt like
forever, it was painful. She lifted her hand, it was so heavy, before
she ran it over her eyes, something cold slid across her face. She
jumped. An IV hung from her arm. She looked at the tube closely,
confused. What was she doing in the hospital? A woman walked in
wearing scrubs. Shock ran over her face. The woman told her she’d
be right back before she disappeared from the room. Kenzie knew there
was something she was forgetting. What was it?

A hand ran down over
the stiff material of the hospital gown. She stopped when she reached
her belly. Slowly, it was coming back to her. The man in gray, the
knife, her head. She pressed a hand to her head. She rolled up her
nightgown quickly, the long scar there stitched together. Her fingers
ran over it, a sob choked her.

“What happened
to me? I remember singing, my room, a man…”

The doctor walked over
to her, pulled a chair to her bedside. The confusion didn’t
dissipate from her eyes. The man sighed.

“Yes, I know
your memories are still a little foggy. We’re hoping that it’ll
clear up in a few days. There was an...incident in your dressing
room. You hit your head pretty hard and sustained a knife wound.
You’re going to be okay...you were just out for a little
while.”

The words swirled in
her brain. In a coma. In a coma. Her hands shook. None of it was
real, she had to be dreaming. She shook her head softly.

“It is. You
weren’t out for very long. Only a month. Still, it can take
some getting adjusted to.”

The doctor nodded.
“Yes, we didn’t know how long you were going to be out-”

“Will you stop
saying that? Stop saying I was out like I went to the fucking grocery
store! I was in a coma for a month and this is how you tell me? Get
out of my room! Get out!”

The doctor stood up
quickly before retreating as she screamed again. She asked the nurse
to find her cellphone. When it was brought to her she threw it across
the room, the black screen breaking. Kenzie couldn’t breathe.
The doctor came back in, worried. He took a syringe of something out
of his pocket and pushed it into her IV line. She protested, but not
for long as she fell back asleep. This time, the only company was the
returning nightmare of the man in gray, stabbing her in the stomach.

*****
Six
months had flown by for Kenzie. The first few days p.c., post coma
she joked with her friends, had been hellish. She had nightmares
every time she went to sleep. Her muscles didn’t work the same,
so physical therapy had come next. That was painful, frustrating. She
felt like a toddler who hadn’t yet learned to walk, only she
couldn’t crawl much either. Kenzie described all of these
things to her friends as if it was the height of humor. Inside, it
hurt. She wouldn’t show them that hurt or anyone else. Instead,
she masked it. No matter how hard she tried to act normal, everyone
seemed to know she had changed.

Kenzie was staying at
her parents for a weekend, visiting them, when she heard her mother
whispering to her dad. Their voices were so low, she could barely
make them out. She knew they were talking about her though.