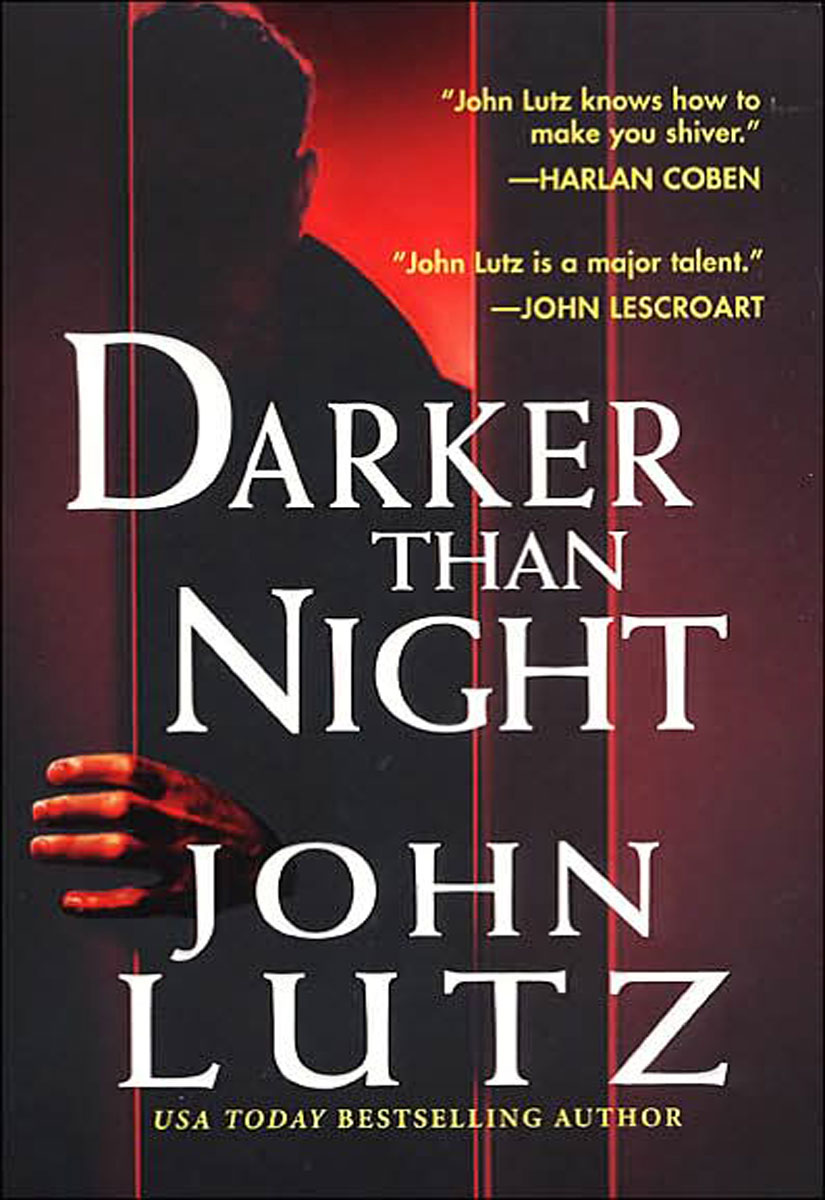 “Lutz's skill will keep you glued to this thriller.”

â
Booklist
on
In for the Kill

â
Publishers Weekly
on
In for the Kill

“Since Lutz can deliver a hard-boiled P.I. novel or a bloody thriller with equal ease, it's not a surprise to find him applying his skills to a police procedural in
Chill of Night
. But the ingenuity of the plot shows that Lutz is in rare form.”

“Lutz ranks with such vintage masters of big-city murder as Lawrence Block and Ed McBain.”

“A fast-moving novel, a plot-driven page-turner of the first order.”

“John Lutz is one of the masters of the police novel and he shows his talents to the fullest here. Highly recommended!”

âRidley Pearson on
Fear the Night

“
The Night Spider
is compelling, suspenseful and creepy. John Lutz knows how to make you shiver.”

“Lutz offers up a heart-pounding roller coaster of a tale.”

âJeffery Deaver on
The Night Spider

“I've been a fan of John Lutz for years.”

“John Lutz is a major talent.”

âEd Gorman in
Mystery Scene
on
The Night Watcher

“Lutz is among the best.”

“It's easy to see why he's won an Edgar and two Shamuses.”

“For a good scare and a well-paced story, Lutz delivers.”

In for the Kill

From Kensington Publishing and Pinnacle Books

For the Royal Aardvarkians,
first among many

For he being dead, with him is beauty slain,

See my lips tremble and my eyeballs roll,

Suck my last breath, and catch my flying soul.

Somethingâ¦a sound from the kitchen, had intruded in gentle dreams she could no longer recall. She reached over to prod her husband, Martin, but her hand found only smooth sheet, cool pillow. Maybe he'd been awakened before her and had gone to investigate the sound.

Jan smiled, drifting back into shallow sleep, sure that her husband would return to bed and everything would be all right. Probably the sound was nothing, the icemaker doing its work, or a delicately balanced object falling in one of the cabinets. Martin would handle the situation, as he did most things. He was a man whoâ

Unintelligible, but she was sure it was Martin's.

Who could he be talking to atâshe glanced again at the clock radio by the bedâthree
A.M
.?

Jan opened her eyes wider and lay in the still darkness. The distant sounds of a half-awake Manhattan filtered in through the bedroom windows. A faint, faraway shout, a siren like a distant wolf on the hunt, a growling whisper of traffic below. Night sounds. She rolled over on her back, listening, listeningâ¦.

Frightened. Though she shouldn't be.

I'm not afraid! There's nothing to fear!

But she knew she was wrong.

Martin never talked to himself. She couldn't imagine it.

Something
clanked,
bounced lightly, then rolled over the kitchen's tile floor.

She swiveled to a sitting position on the edge of the mattress, her heart drumming a rapid message of alarm. She remembered what her grandmother had told her years ago.
The heart knows before the head. Knows everything first.
Beyond the bedroom doorway she could see a rectangle of light from the kitchen, angled over the hall floor. Then the light altered as a shadow passed across it.

What is Martin doing out there?

She stood up, one bare foot on the woven throw rug beside the bed, the other on cool hardwood floor. That was one of the things she and Martin had liked most about their Upper West Side apartment, the polished oak floors. They knew somehow they could be happy there.

And we were happy.
Are
happy!

What did her heart know that her mind didn't?

Fear was like a drug, yet it propelled her through her dread toward the light near the end of the hall. She had to find outâhad to know what it was that terrified her. She walked stiff-legged in her silk nightgown, her pale fingers clenched around her thumbs. The only sound she heard now was the faint
thump, thump
of her bare heels striking the wood floor as she lurched toward light and a horrible knowledge she couldn't avoid.

She turned the corner and stood in the kitchen doorway.

Her breathing stopped as she took it all inâthe bright kitchen, Martin curled on the tile floor in what looked like a black shadow, the plastic bag and groceries scattered on the gleaming gray surface of the table. A tuna can lay on the floor near Martin's right arm.
That's what I heard fall. It must have rolled off the table.

She heard herself utter Martin's name as she took a step toward him.

She wasn't surprisedânot reallyâwhen a dark figure straightened up from behind the cooking island and moved toward her. It was more like a confirmation of what her terror had already told her. Something in his right hand. A gun?
No. Yes!
A gun with something attached to it. A gun with a silencer.

“Please!” She saw one of her hands float up in front of her face. “Please!”
Not me! Not me! Not yet!

She barely heard the
sput!
of the gun as the bullet ripped through tissue and bone, between her breasts, into her heart, a leaden missile tumbling and tearing through her world, her life, ending her past, her future, everything.

She was still alive on the floor, beyond pain but not horror, as the man with the gun momentarily bent over Martin, then delicately stepped over her, careful not to get blood on his shoes, and continued toward the door.

For an instant she glimpsed the expression on the face of the monster who had taken all that she had and was.
Him!
He was so calm, smiling contentedly, like a simple workman who'd accomplished a routine and necessary task.

He glanced down at her with faint curiosity, then obviously dismissed her as dead.

He wasn't wrong, only a few seconds early.

Fedderman blinked as yet another photo was shot and the auto winder on the camera whirred like a miniature blender. The crime scene unit was all over the apartment, photographing, luminoling, vacuuming, plucking with tweezers.

The Elzners didn't seem to mind the intrusion. Or the carnage in the kitchen. Not even what had been done to them.

Sudden death did that to people. In the midst of all the horror he'd seen during his time in the NYPD, Fedderman had often thought that was the single mercy.

“About done with these two?” his partner, Pearl, asked the ME, a self-important, meticulously groomed little man named Nift, who, if his life had taken another direction, might have had a film career playing Napoleon. He'd been fussing over the bodies for the last fifteen minutes, giving Pearl and Fedderman some first impressions.

“Sure. You can diddle with them awhile now. Just be sure and zip up when you're finished.”

Fedderman watched Pearl step hard on Nift's instep, perhaps deliberately, as she moved toward Martin Elzner's body. Those comfortable-looking black shoes of hers, with the two-inch heels to make her appear taller than her five-foot-one stature, could be dangerous.

Nift winced and jerked backward, almost kicking away the tuna can on the kitchen floor.

“Try not to step in any blood,” Pearl said.

Then she ignored Nift entirely as she bent down and gingerly pried a Walther semiautomatic handgun from Elzner's dead fingers, then used a pencil inserted in the barrel to transfer the gun to a plastic evidence bag.

Nift glared at her and made for the door, taking his sick sense of humor with him and not looking back. One thing Fedderman knew about Detective Pearl Kasner was that she didn't take any crap from anybody, not even Napoleon. It was the character trait that had gotten her into trouble and sidelined her career. It was why Fedderman liked her but figured she wasn't going to be his partner much longer. Probably this time next year she'd be driving a cab or demonstrating perfume in Macy's.

She was a looker, Fedderman thought, with the great rack and nice ass, and could be an actress or model if she were taller. Searching dark eyes, wavy black hair, turned-up nose, a way about her. Fedderman sometimes mused that if he were younger, unmarried, didn't have trouble getting it up sometimes, didn't have bad breath, a chronically upset stomach, and wasn't balding and thirty pounds overweight, he might make a play for her.

Pearl handed one of the techs the evidence bag with the gun, glancing at Fedderman as if she knew what he was thinking.

She knows.
They were partners. Had been for months, since Pearl's troubles began. Neither of them was getting a bargain, and they both knew it. That was the idea. If they got tired of each other's company, that was tough shit. Like with the couple on the kitchen floor.

Homicide had been called in after the radio car uniforms arrived at the scene, called by a next-door neighbor who noticed what looked like a bullet hole in her kitchen wall. When the super had let them in, they discovered the hole was indeed made by a bullet. It had gone through Jan Elzner, then the wall separating the Elzner apartment from the adjacent unit. The uniforms backed out and secured the scene.

Pearl and Fedderman had questioned the tenants on either side of, and above and below, the Elzners. None of them remembered hearing anything like a gunshot, but then Nift had said the killings occurred sometime between two and four in the morning. Sleep was deepest then. Or was supposed to be. Fedderman knew that when people were awake at that time, for whatever reason, terrible things could happen.

He glanced around at the carnage, feeling his stomach kick even after all the years, all he'd seen. He looked at the kitchen table. “How do you figure the groceries? It looks like one or both the Elzners had just come back from shopping and they were putting away what they bought.”

Pearl gave him one of her sloe-eyed dark looks. “At three in the morning? In their pajamas and nightgown?”

“It doesn't make sense now, I know. But maybe they shopped earlier and forgot to put stuff away, then remembered and got up and were finishing the job when they started arguing. Hubby got the gun and did Wifey, then himself. It could happen in the real world.”

“That would be our world?”

Fedderman didn't want to get into some kind of metaphysical conversation with Pearl. “So whadda we tell Captain Egan, murder-suicide?”

“Yeah, yeahâ¦that sure looks like what it was, murder-suicide. Stemming from the pressures of the big city and what comes of marital bliss.”

Fedderman breathed easier. She wasn't going to buck the system and cause problems. He had enough problems.

“But it isn't complete.”

“Nothing's ever complete,” Fedderman said, “but we gotta go with the evidence. Two dead bodies. And what will no doubt be the weapon still in Hubby's hand, powder burns around the hole in his head. It appears he shot the wife, realized what a shit deed he did, then killed himself. The honorable thing. Murder-suicide. Crime solving being on a kinda assembly-line basis with new crimes always demanding our attention, we chalk this one up and move on to the next problem coming down the line.”

Fedderman knew what she meant. Even if somehow she kept her job in the NYPD, she wasn't going any higher. Promotions were not for Pearl.

She knew where she stood and so did everyone else, after what she'd done to Captain Egan.

Sometimes, when he thought about it, Fedderman caught himself smiling.