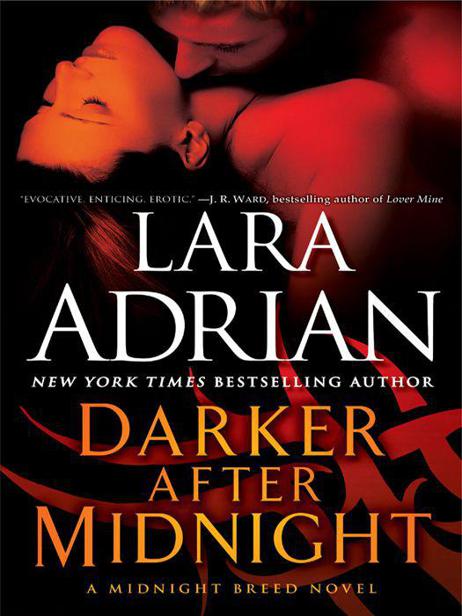 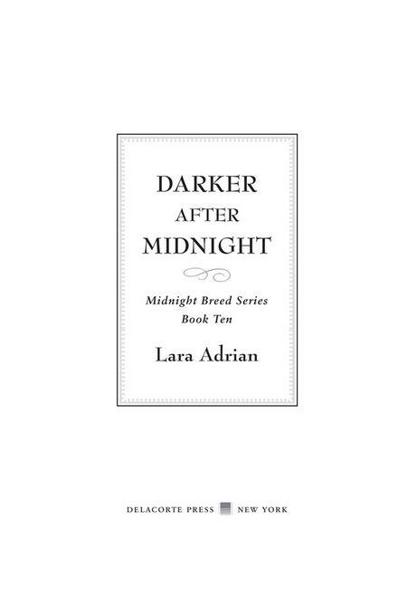 Darker After Midnight
is a work of fiction. Names, characters, places, and incidents are the products of the author’s imagination or are used fictitiously. Any resemblance to actual events, locales, or persons, living or dead, is entirely coincidental.

Published in the United States by Delacorte Press, an imprint of
The Random House Publishing Group, a division of
Random House, Inc., New York.

“T
HE CHARGES ARE SET
, Lucan. Detonators are ready whenever you say the word. On your go, it all ends right here.”

Lucan Thorne stood silent in the dusk-filled, snow-covered yard of the Boston estate that had long served as a base of operations for himself and his small cadre of brothers in arms. For more than a hundred years, on countless patrols, they rode out from this very spot to guard the night, maintaining a fragile peace between the unwitting humans who owned the daytime hours and the predators who moved among them secretly, sometimes lethally, in the dark.

Lucan and his warriors of the Order dealt in swift, deadly justice and had never known the taste of defeat.

Tonight it was bitter on his tongue.

“Dragos will pay for this,” he growled around the emerging points of his fangs.

Lucan’s vision burned amber as he stared across the expansive lawn at the pale limestone facade of the Gothic mansion. A chaos of tire tracks scarred the grounds from the police chase that had crashed the compound’s tall iron gates that morning and come to a bullet-riddled halt right at the Order’s front door. Blood stained the snow where law enforcement gunfire had mowed down three
terrorists who’d bombed Boston’s United Nations building then fled the scene with a dozen cops and every news station in the area in close pursuit.

All of it—from the attack on a human government facility, to the media-covered police chase of the suspects onto the compound’s secured grounds—had been orchestrated by the Order’s chief adversary, a power-mad vampire called Dragos.

He wasn’t the first of the Breed to dream of a world where humankind lived to serve and served in fear. But where others before him with less commitment had failed, Dragos had demonstrated astonishing patience and initiative. He’d been carefully sowing the seeds of his rebellion for most of his long life, secretly cultivating followers within the Breed and making Minions of any humans he felt could help carry out his twisted goals.

For the past year and a half, since their discovery of Dragos’s plans, Lucan and his brethren had kept him on the run. They had succeeded in driving him back, thwarting his every move and disrupting his operation.

Today it was the Order pushed back and on the run, and Lucan didn’t like it one damn bit.

“What’s the ETA at the temporary headquarters?”

The question was aimed toward Gideon, one of the two warriors who’d remained behind with Lucan to wrap things up in Boston while the rest of the compound went ahead to an emergency safe house in northern Maine. Gideon glanced away from the small handheld computer in his palm and met Lucan’s gaze over the rims of silvery blue shades. “Savannah and the other women have been on the road for nearly five hours, so they should be at the location in about thirty minutes. Niko and the other warriors are just a couple hours behind them.”

Lucan gave a nod, grim but relieved that the abrupt relocation had come together as well as it had. There were a few loose ends and details yet to be managed, but so far everyone was safe and the damage Dragos had intended to inflict on the Order had been minimized.

Movement stirred on the other side of Lucan as Tegan, the
other warrior who’d stayed behind, returned from the latest perimeter check. “Any problems?”

“None.” Tegan’s face showed no emotion, only grim purpose. “The two cops in the unmarked stakeout vehicle near the gates are still tranced and sleeping. After the hard memory scrub I gave them earlier today, there’s a good chance they won’t wake up until next week. And when they do, it’ll be with one hellacious hangover.”

Gideon grunted. “Better a mind scrub on a couple of Boston’s finest than a very public bloodbath involving half the city’s precincts and the feds combined.”

“Damn straight,” Lucan said, recalling the swarm of cops and reporters who had filled the estate grounds that morning. “If the situation had escalated and any of those cops or federal agents had decided to come banging on the mansion door … Christ, I’m sure I don’t need to tell either of you how fast or how far things would have gone south.”

Tegan’s eyes were grave in the rising darkness. “Guess we’ve got Chase to thank for that.”

“Yeah,” Lucan replied. He’d lived a long time—nine hundred years and then some—but for however long he’d walk this Earth, he knew he would never forget the sight of Sterling Chase strolling out of the mansion and squarely into the aim of a lawn full of heavily armed cops and federal agents. He could have died several ways in that moment. If the adrenaline-fueled panic of any one of the armed men assembled in the yard hadn’t killed him on the spot, spending longer than half an hour under the full blast of morning sunlight would have.

But Chase apparently hadn’t cared about any of that as he’d allowed himself to be cuffed and led away by the human authorities. His surrender—his personal sacrifice—had bought the Order precious time. He had diverted attention from the mansion and what it concealed, giving Lucan and the others the chance to secure the subterranean compound and mobilize the evacuation of its residents once the sun set.

After a string of bad calls and personal fuck-ups, most recently a failed strike against Dragos that had inadvertently landed Chase’s
face on the national news, he was the last of the warriors Lucan would have turned to for answers. What he had done today was nothing short of astonishing, if not suicidal.

Then again, Sterling Chase had been on a self-destructive path for some time now. Maybe this was his way of nailing that coffin shut once and for all.

Gideon raked a hand over the top of his spiky blond hair and exhaled a curse. “Fucking lunatic. I can’t believe he actually did it.”

“It should have been me.” Lucan glanced between Tegan and Gideon, the warrior who’d been with him when he’d first founded the Order in Europe and the one who’d helped him establish the warriors’ home base in Boston centuries later. “I’m the Order’s leader. If there was a sacrifice to be made to spare everyone else, I should have been the one to step up.”

Tegan eyed him grimly. “How long do you think Chase would have been able to keep his Bloodlust at bay? Whether he’s in human custody or loose on the streets, his thirst owns him. He’s lost and he knows that. He knew it when he walked out that door this morning. He had nothing left to lose.”

Lucan grunted. “And now he’s sitting in police custody somewhere, surrounded by humans. He might have spared us from discovery today, but what if his thirst gets the better of him and he ends up exposing the existence of all the Breed? One moment of heroism could undo centuries of secrecy.”

Tegan’s expression was coldly sober. “I guess we’ll have to trust him.”

“Trust,” Lucan said. “That’s a currency he’s come up short on more than once lately.”

Unfortunately, right now, they didn’t have a lot of choice in the matter. Dragos had demonstrated quite effectively just how far he was willing to take his enmity toward the Order. He had no regard for life, human or his own kind, and as of today, he’d shown that he would take their power struggle out of the shadows and into the open. It was dangerous ground, with impossibly high stakes.

And it was personal now. Dragos had crossed a line here, and there would be no going back.

Lucan glanced at Gideon. “It’s time. Hit the detonators. Let’s get this done.”

The warrior gave a slight nod and turned his attention back to his handheld computer. “Ah, fuck me,” he muttered, the traces of his British accent punctuating the curse. “Here we go then.”

The three Breed males stood side by side in the crisp, cold darkness. Above them the sky was clear and cloudless, endless black, pierced with stars. Everything was still, as if Earth and the heavens had frozen in time, suspended in that instant between the silence of a perfect winter night and the first low rumble of the destruction unfolding roughly three hundred feet beneath the warriors’ boots. It seemed to carry on forever, not some great bombastic spectacle of furious noise and spewing fire and ash but a quiet yet thorough annihilation.