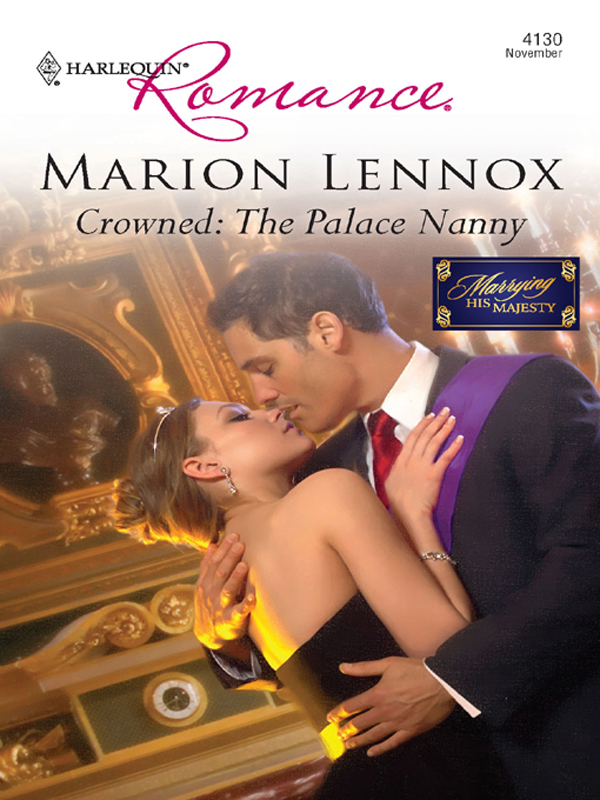 She'll be his brideâby royal decree!

The crowns of the Diamond Isles are about to return to their rightful heirs: three gorgeous Mediterranean princes.
But their road to royal matrimony is lined with secrets, lies and forbidden loveâ¦.

Nikos is the people's prince, but the crown of Argyros belongs to the reluctant Princess Athenaâthe woman he was forbidden to marry.
Can Nikos finally persuade her to come home?

This month
Crowned: The Palace Nanny

For Elsa, nanny to the nine-year-old heiress to the throne of Khryseis, Zoe, there's more in store than going to the ball. Can this Cinderella win the heart of the new prince regent?

Marion Lennox
is a country girl, born on an Australian dairy farm. She moved onâmostly because the cows just weren't interested in her stories! Married to a “very special doctor,” Marion writes for the Harlequin
Â®
Romance line. (She used a different name for a whileâif you're looking for her past Harlequin Romance novels, search for author Trisha David, as well.) She's now had more than seventy-five romance novels accepted for publication.

In her non-writing life Marion cares for kids, cats, dogs, chickens and goldfish. She travels, and she fights her rampant garden (she's losing) and her house dust (she's lost).

Having spun in circles for the first part of her life, she's now stepped back from her “other” career, which was teaching statistics at her local university. Finally she's reprioritized her life, figured out what's important and discovered the joys of deep baths, romance and chocolate. Preferably all at the same time!

For an extra-special treat this Christmas don't look under the Christmas tree or in your stockingâpick up one of your favorite Harlequin Romance novels, curl up and relax!

From presents to proposals, mistletoe to marriage, we promise to deliver seasonal warmth, wonder and of course the unbeatable rush of romance!

And look out for Christmas surprises this month in Harlequin Romance!

The invitation had been sitting on the table all day, a taunting reminder of her past.

The International Coral Society invites Dr Elsa Langham, foremost authority on Coral: Alcyonacea, to submit a paper at this year's symposium in Hawaii.

The ICS hadn't kept up with her change in direction. Eight-year-old Zoe was asleep in the next room, totally dependent on her, and Dr Elsa Langham was no longer an acclaimed authority on anything.

She read the invitation one last time, sighed and finally dumped it in the bin.

âI don't know why they're still sending me invitations,' she told the skinny black cat slinking out from under her chair. âI'm Mrs Elsa Murdoch, a mother to Zoe, an occasional student of starfish to keep my scientific hand in, and my cats need feeding.'

She rose and took a bowl of cat food to the back garden. The little cat followed, deeply suspicious but seduced by the smell of supper.

Four more cats were waiting. Elsa explained the terms of their tenancy as she did every night, fed them, then ignored
five feline glares as she locked them up for the night. They knew the deal, but they didn't have to like it.

âAt least you guys go free every morning,' she told them. âYou can do what you want during the day.'

And so could she, she told herself. She could take Zoe to the beach. She could study starfish. She could be Mrs Elsa Murdoch.

Until a miracle happens, she thought to herself, pausing to look up at the night sky. Not that I need a miracle. I really love Zoe, I don't mind starfish and I'm incredibly lucky to be alive. It's justâ¦I wouldn't mind a bit of magic. Like a rainbow of coral to appear in our cove. Or Prince Charming to wave his wand and take away my debts and Zoe's scars.

Enough. The cats weren't interested in wishes, and neither was anyone else. She smiled ruefully into the night, turned her back on her disgruntled cats and went inside. She needed to fix a blocked sink.

Where was Prince Charming when you needed him?

The little boy would live.

Prince Stefanos AntoniadisâDr Steve to his patientsâwalked out of Theatre savouring a combination of triumph and exhaustion. He'd won.

The boy's motherâa worn-looking woman with no English, but with a smile wide enough to cut through any language barrierâhugged him and cried, and Stefanos hugged her back and felt his exhaustion disappear.

He walked into the scrub room, sorely tempted to punch the air in triumphâand then stopped dead.

This wasn't fantastic. This was trouble.

Two months ago, King Giorgos of the Diamond Isles had died without an heir. Next in line to the throne of the Mediterranean island of Khryseis was Stefanos's cousin, Christos. The only problem was, no one could find Christos. Worse, if Christos couldn't be found, the throne belonged to Stefanosâwho wanted the crown like a hole in the head.

In desperation he'd employed a friend who moved in diplomatic circles and whose discretion he trusted absolutely to search internationally for Christos. That his friend was here to tell him the news in person meant there must be a major problem.

âThey told me you've been opening a kid's skull, chopping bits out and sticking it back together,' his friend said with easy good humour. âHow hard's that?
Seven hours
â¦'

âI get paid by the hour,' Stefanos said, grasping his friend's hand. But he couldn't make himself smile. âWhat news?'

âFrom your point of view?' As an investigator this man was the best, and he knew the issues involved. âYou're not Crown Prince of Khryseis.'

âNot!' He closed his eyes. The relief was almost overwhelming.

It hadn't always been like this. As a boy, Stefanos had even dreamed of inheriting the throne that his almost pathologically shy cousin swore he didn't want.

But that was in the past. King Giorgos was bound to have sons, and if notâ¦Christos would just have to wear it. Almost twenty years ago, Stefanos had moved to the States to pursue a medical career. His dream since then had been to perfect and teach surgical techniques, so wounds such as the ones he'd treated today could be repaired in hospitals less specialised than this one, anywhere in the world. âSo you've finally found Christos?' he asked, feeling the weight of the world lift from his shoulders.

âSort of,' his friend said, but there was something in his face which made Stefanos's jubilation fade. His expression said that whatever was coming wasn't good.

âChristos is dead, Steve,' the man said gently. âIn a car accident in Australia, four years ago. That's why you haven't been able to find him.'

âDead.' He stared at his friend in horror. âChristos? My cousin. Why? How?'

âYou know he left the island soon after you? Apparently he
and his mother emigrated to Australia. Neither of them kept in touch. It seems his mother held his funeral with no fuss, and contacted no one back on Khryseis. Three months after he died, so did she.'

âIt's the worst of news,' his friend said. He hesitated. âBut there's more.'

Stefanos knew it. He was replaying their conversation in his head. His friend's first words had been, âYou're not Crown Prince of Khryseis.'

Christos had been first in line to the throne, followed by Stefanos. But Christos was dead. Therefore it had to be Stefanos. Unlessâ¦

âThere's a child,' his friend told him.

âA little girl. Christos married, but his wife was killed in the same accident. Their child survived. She was four when her parents were killed. She's now eight.'

Stefanos didn't respond. He was staring at his friend, but he was seeing nothing.

He was working on groundbreaking surgical techniques. His work here was vital.

âHer name's Zoe,' his friend said. âShe's still living in Australia with a woman called Mrs Elsa Murdoch, who seems to be employed as her nanny. But, Steveâ¦'

âYes?' But he already knew what was coming.

âChristos's death means the child takes the Crown,' he said gently. âZoe's now the Crown Princess of Khryseis. That means you're Prince Regent.'

Stefanos still didn't answer. There was a chasm opening before himâa gaping void where his career used to be. He could only listen while his friend told him what he'd learned.

âI've done some preliminary checks. From what I gather of the island's constitution, you'll be in charge until Zoe's twenty-five. The island's rule, and the consequent care of your
cousin as Crown Princess, lies squarely on your shoulders. Nowâ¦do you want me to find an address for this woman called Elsa?'

Sabrina's Vampire by Michaels, A K
Cowboy Sandwich by Reece Butler
The Siege Scare by Frances Watts
The Oasis of Filth by Keith Soares
The Underdogs by Mike Lupica
Department 19: The Rising by Will Hill
Day of the False King by Brad Geagley
Obsidian Mirror by Catherine Fisher
Privileged Children by Frances Vernon
Traded by Lorhainne Eckhart