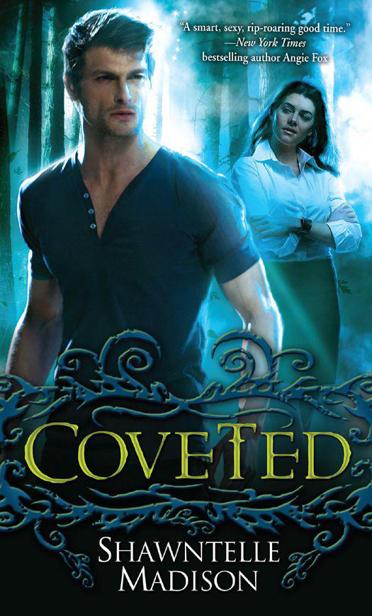 Coveted
is a work of fiction. Names, places, and incidents either are products of the author’s imagination or are used fictitiously.

B
ALLANTINE
is a registered trademark and the Ballantine colophon is a trademark of Random House, Inc.

This book contains an excerpt from the forthcoming book
Kept
by Shawntelle Madison. This excerpt has been set for this edition only and may not reflect the final content of the forthcoming edition.

L
ying
naked, with his hands intertwined in mine, Thorn Grantham made me promises. A promise for us to try to make our long-distance relationship work. A promise for him to move closer to New York City to be with me. And finally a promise to remove these handcuffs once he’s had his way with me.

With mischievous hazel eyes, Thorn pulled a bottle of chocolate syrup out of his suitcase.

“You wouldn’t dare,” I whispered. My gaze darted from my perfectly pressed sheets to my pristine bedroom. It would take hours to clean up the evidence of our love-making.

His eyes darkened. “You gonna stop me?”

In a flash, he popped off the top and jumped on my bed. I jerked against the cuffs holding me hostage, but it didn’t do any good. Thorn knew all too well that I wouldn’t so much as scratch let alone break my antique Victorian headboard to escape. Especially after he squeezed a line of warm chocolate from my neck down to my inner thighs. My heart skittered from the heat in Thorn’s eyes. From the sweet scent of the chocolate in the air.

Thorn’s gaze never left mine as the tip of his tongue
traced a path along the chocolate. Swirl after swirl of his tongue heated my flesh.

Shouldn’t I be worried about the mess?
What
mess? The mess of having my toes curl in waves of ecstasy?

Thorn’s head descended, proving to me again and again how he could unravel me like a tightly bound corset.

Making love to Thorn wasn’t a casual affair—it was an Olympic event that taxed both the mind and body. When we’d decided to hook up at my place a few days ago, I hadn’t expected him to use such things in my bedroom. Nor did I expect that in a million years I’d allow food in my bedroom. And have it smeared on my bed …

After he’d indulged in every inch of my body until we were both satisfied, I wanted to sleep. But that sure as hell wouldn’t stop me from keeping my room clean. With a chuckle, Thorn obediently helped me wash the bedding. When we’d wrapped up cleaning and had a bite to eat, he bid me farewell.

Kissing the top of my head, he whispered, “See you in a few weeks.”

“Of course. It’ll take the apocalypse to keep me from you.”

“A zombie one or the Mayan kind?”

He thought for a moment with that smile of his. “Both.”

With me assured, he left the bedroom. As I sat alone in my apartment, I had no idea that this would be the last time I’d make love with Thorn. And that there were some promises that couldn’t be kept.

W
erewolves
in no shape or form should own a fast food restaurant. No pancakes, no frozen custard, and for goodness sake, my people needed to stop peddling pizza. In my opinion, any establishment where my food could potentially grow microscopic wildlife wasn’t my kind of place to eat. That pretty much left fire-grilled food on the menu, and the only good thing any werewolf grilled well these days was a well-done burger. And Archie’s sold the best double-stacked burger on this side of the Toms River. If the animal walked and men speared it, then Archie burned it the best.

I averted my eyes after I placed my order. As usual, I was the lowest-ranking werewolf in the whole joint. “We’re really busy now that the weather’s cooling off.”

I ended the conversation and hid out in my usual booth while my food cooked. As much as I loved Archie’s burgers, I preferred to keep to myself while I ate.

As I waited, travelers coming off the Garden State Parkway came by for chow. They weren’t like those tourists who walk around with fanny packs and cameras. Instead, they smelled of money—the cash they were
about to spend on other people’s old junk at one of the many flea markets that lined the Parkway.

Ten minutes later, Jake’s younger sister, Misty, brought out my food on a tray. My mouth watered at the sight of the double cheeseburger and fries. But that snotty werewolf didn’t even bother to acknowledge my presence. She simply dumped the food in front of me and strolled off. A single bright-red gob of burger sauce landed on my pristine blouse.

My eyes wide, I gaped at the stain as my chest tightened with alarm. And I thought
I
was crazy. The way she flung food on my table each week, it was clear that she had no idea how every spill, glob, and splatter drastically increased my stress level. With a shaking hand, I frantically wiped the spot with a stain pen.

And all this after I’d spent a half hour this morning meticulously pressing my clothes. With my light chestnut-colored hair brushed to perfection and my low-heeled shoes shined, I’d felt like I could survive the day in relative peace.

Well, as peacefully as a werewolf who obsessed over everything could. I didn’t advertise my condition, but if you saw a chick scrubbing her clothes with an industrial-strength stain pen, you might assume she’s a bit of a clean freak. With an obsessive-compulsive disorder, I took clean freak to the next level. But even with my condition, I lived what could be called a normal life.

Archie’s had been my lunch spot for the past few years. And no matter how bad the service was, or the conditions, I refused to eat lunch anywhere else.

My food was cold before I had a chance to take a bite. But it didn’t matter. I savored the burger anyway—that is, until two familiar faces entered the restaurant.

Everyone in South Toms River knew Erica Holden and Becky Knoll. They didn’t work. Well, they worked at
being rich, I guess. After college in New York, they came back into town to spend Erica’s rich daddy’s money.

“Jake!” Erica gushed. “You have the order ready?”

Jake’s hungry eyes took in Erica’s perfect blonde hair and cotton candy–pink sweater. The garment stretched across her boobs and hung on for dear life.

“It’s coming up right now. Took us awhile to grill that many deluxe burgers.” He leaned forward. “Are you having a few guests over?”

Becky laughed and flipped her chocolate-brown curls behind her ear. “Erica’s picking up Thorn’s favorite burgers. She’s so sweet.”

They were ten feet away, but even from that distance I could sense the excitement sliding down Erica’s back. The name gave me the same honeyed feeling.

My heartbeat quickened and the burger nearly caught in my throat. I flared my nostrils and focused on Erica. Through the scent of fancy perfume and chemical-strength deodorant, an underlying scent was there. Thorn was back. And Erica had likely tried to run her manicured fingernails all over him. Probably made a valiant attempt to rub herself against him too. Over the years, her stints at becoming Thorn’s groupie weren’t anything new to me.

I averted my eyes and finished my food. I had just seven minutes left in my lunch hour—and no time to waste sitting there staring at Erica.

By the time I left for work, she was long gone. As I stalked out of Archie’s, I caught the scent of Misty’s satisfaction as she cleared my table. Even though she always mistreated me and never cleaned up after her customers, I’d still left her a full tip.

I worked at the Bend of the River Flea Market, or The Bends as the locals called it, which was three blocks
away from Archie’s. I didn’t mind walking over every day. The fresh air was good for my soul.

And maybe I would even see Thorn on the way to work. I had a feeling, though, that he would be back at the Granthams’ log cabin off in the woods—meeting with his father, the town’s abominable pack leader.

On the way back, a local organic farmer in overalls waved at me. “Have a good afternoon, Nat.”

Every day after lunch he waved at me, and then, after I passed by, stared at my legs. I didn’t have any interest in sixty-year-old men—especially ones with pencil-skirt fetishes. But like the majority of humans in the world, he didn’t know that he was ogling a werewolf every day.

And perhaps he’d be even less inclined to act so friendly if he knew that werewolves weren’t the only strange thing lurking around here.

The Bends offered the best deals among the flea markets along the eastern seaboard. Bill was a great employer and all, but I was the brains of this operation. With a computerized inventory system and online store for our more expensive stock, we offered a level of service most flea markets—supernatural or otherwise—just couldn’t match.

Growing up as a natural-born werewolf, I’d been exposed to the supernatural world from the crib onward. It ranged from witches visiting for grade school sleepovers to band practice with the fairy folk. After selling all the strange things we had in the store, I suspected that even stranger things than crooked witch wands and haunted capes lurked around New Jersey to buy. If you checked the right places and had the enchanted eyesight to find
them you had a chance. Of course, that left humans out of the mix.

I entered through the back, an outdoor area covered with a long, steel awning. During warmer weather, we sold more of our wares on the rows of tables out here. I headed inside the shop and dropped off my purse in the business office. The office was closed off from the shopping floor by a large set of wooden doors. Two minutes later, I was back in the mix—in the crowded main room, with a roomful of Saturday shoppers browsing the long aisles.

My boss approached me from the loading dock. “Hey, Nat, about time you got back. The harpy who bought that Victorian vase on Thursday is back. She said the merchandise had flaws.”

To regular folks, Bill looked like a tall, thin man with wire-framed glasses. To my eyes he resembled the cartoon character Dilbert—but to my nose he reeked of magic with a bitter tang of iron.