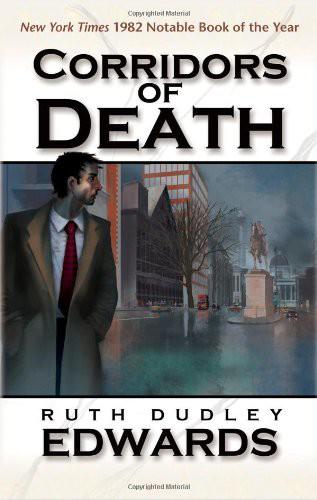 At the close of a top-level meeting in the offices of the British Civil Service, a respected senior civil servant is found murdered with his skull crushed in. Detective Superintendent James Milton of Scotland Yard is bewildered: who in his grey, conventional world would want Sir Nicholas Clark dead? And can a murder investigation proceed—successfully—within the complex bureaucracy of Whitehall?

But Milton is surprised. For there really wasn’t anyone in Sir Nicholas’ private or professional life who
didn’t
want him dead, including his wife, who felt unfulfilled; his son, for whom he never had time; his manipulated undersecretaries; the famous scientist whom he recruited and then sabotaged. Sir Nicholas Clark was, in fact, a chess player who liked to use real people as his pawns.

Not since C.P. Snow has a novelist so convincingly captured the essentially Machiavellian and potentially homicidal world of the British Civil Service, a world which makes its own rules. Ruth Dudley Edwards has written a compelling and witty mystery in which the halls of political power become the
Corridors of Death
.

ABOUT THE AUTHOR: Ruth Dudley Edwards has written several books on Irish history, including
An Atlas of Irish History
and
Patrick Pearse: The Triumph of Failure
, and was once a member of the British Civil Service.

to my friends in the Civil Service,

The Chancellor of the Exchequer summed up the discussion with a smoothness and wit which efficiently masked his fury. His invitation to the assembled industrialists, trades unionists, ministerial colleagues and civil servants to adjourn for drinks and lunch concluded the meeting and was swiftly followed by a well-bred stampede of aching bladders in the direction of the gentlemen’s lavatory. Amiss knew his place as a civil servant – and a junior one at that – too well to seek early relief, and trailed behind the less urgent cases to the outer room, where he moved swiftly towards the drinks table. It was one thing to yield to his seniors in the rush for the bog, but he was damned if he was about to allow his sense of propriety to extend to holding back from grabbing the quickest and largest drink available. After what he – as a member of the Department of Conservation’s team of officials – had suffered that morning, he needed what solace he could find.

‘Embarrassing business, wasn’t it?’ said a pleased Treasury voice at his side, and with suppressed irritation Amiss directed at the smirking face of Peregrine Pryce-Jones the appropriate bland smile, with its implicit refusal to admit that his own Secretary of State had this time made not an ass, but an egregious ass of himself – in full view of the most distinguished industrial-political group in the British Isles. ‘Gin and tonic?’ he offered, by way of distraction, and with it a hastily invented problem on which the Department of Conservation could use some wise but informal advice from a rising young economist.

As Pryce-Jones dithered fluently on, ‘on the one hand’ giving way to ‘on the other’, sentences beginning ‘There are four points to be considered here’ inevitably yielding up four and only four points, each concisely stated, each unassailable, each promising some kind of conclusion, while the sum of their parts yielded nothing remotely involving a commitment, Amiss allowed his eyes to stray around the room in search of his immediate master. Sir Nicholas, Permanent Secretary of the Department, and engineer of the ‘embarrassing business’, was nowhere in evidence. Amiss, his Private Secretary, considered briefly whether this could conceivably be due to shame at the confusion to which his unaccountable malice had reduced first the Secretary of State for Conservation and then the entire group, but dismissed the idea with a snort. The snort struck the wrong note among the compliant grunts with which he had been punctuating the Treasury man’s cogent exposition. Pryce-Jones, suddenly recognizing that his enthusiasm for his subject had led him to waste ten valuable minutes on a youth whose only possible importance was as a source of inside information, but who had neatly evaded a gossip about the morning’s events, discreetly swivelled his own eyeballs under cover of a swig of his drink, discovered someone with whom he must just have a word and disappeared across the room.

Too junior to be properly entitled to start a conversation with any of the national figures present and too tender from the morning’s
débâcle
to leave himself open to any more snide remarks from colleagues in other departments (‘What’s got into your minister, old boy?’), Amiss headed for the lavatory. He reckoned it should by now have received the worst of the onslaughts of the famous. He felt ill-used when he found himself leaving simultaneously with the Chancellor, who, he feared, might well identify him as one of the group of officials guilty by association with Sir Nicholas. The Chancellor, however, true to form, chatted amiably and inconsequentially as they stood at adjacent urinals. Not for the first time Amiss thought how inhibiting it must be for the mighty to find themselves exposing their private parts in the company of those so inferior in status and sensibilities that curiosity might impel them to take a swift appraising peek. He had often wondered if it was that consideration or simple prudery that made Sir Nicholas head for the cubicle on such occasions.

They re-entered the room and the Chancellor headed off with a wide smile and an arm already poised for a democratic hugging of the shoulders of some influential trades unionists. Amiss again surveyed the group in search of Sir Nicholas’s pinched face. Unsuccessful once more, he investigated the conference room next door and, at a loss for other ideas, returned to the drinks table in time to snatch another large one before the drift into lunch.

Depression had gripped him by now. If the old bastard had gone back to the office Amiss would get a bollicking for staying to lunch. If he didn’t stay to lunch it was equally inevitable that the shit would turn up to it late and be furious to find no Private Secretary. He wouldn’t even have the consolation of a decent meal – this group’s preoccupation with public-expenditure cuts ensured that the civil-service caterers would provide the Grade Four lunch, normally reserved for gatherings with neither political nor industrial clout. Sitting at the end of the minions’ table, wading through a grey and mottled soup, gristle in gravy with powdered potatoes, and a sweating cheese, and listening halfheartedly to an animated discussion on forecasting models being held between two alert young officials across the table, Amiss was conscious of the roars of insincere laughter from the top table. Would that the multitude could observe how the leaders of management, workers and the political parties (who within minutes would be giving a press conference denouncing each other) comported themselves in private. If they could hear Alf Shaw of the Plastics Extrusion Workers’ Union calling his main industrialist opponent ‘Puffy’, while the Secretary of State for Energy massaged the arm of the large lady from the Conserve Our Natural Resources Association, they might become as disenchanted as Amiss felt as his meal congealed in a stomach already taxed by a hangover, his nervous panic of the morning and his deepening gloom at the horrors he would face during the afternoon.

The cheese was still glistening on his plate, and his neighbours displaying signs of some emotion over certain aspects of econometrics, when a security guard slid through the door and whispered to the Chancellor of the Exchequer. The Chancellor rose and surveyed the room. ‘Gentlemen,’ he began and, hastily, after a throat clearing from the large lady, ‘Lady and gentlemen. I have distressing news.’ Amiss had just realized that the pallor of the speaker’s face indicated something more than a new disappointment about the money-supply figures when he heard him continue. ‘I regret to have to tell you that Sir Nicholas Clark has been found dead. I must ask you all to remain in this room until further notice.’

As the Chancellor sped towards the doorway Amiss found that whatever emotion he might otherwise have felt at the news of his superior’s demise was completely overlaid by a new panic about protocol. Shouldn’t a Private Secretary be at his master’s side even if that master was a corpse? Or would that appear pushy and therefore likely to be noted down against him on his next personnel report? Christ, he couldn’t be expected to be
au fait
with any precedents for this. Permanent Secretaries didn’t die at work. They retired at sixty, pink-cheeked and ready to supplement their index-linked pensions with a brace of directorships. God, what had the civil service reduced him to in only four years? Career prospects, at a moment like this? But wasn’t that what Sir Nicholas would have wished? He, after all, would have shown only glee if an aircraft containing every official senior to him had crashed with fatal consequences to all on board. Anyway, Amiss loathed Sir Nicholas so much that he would be better off thinking practically rather than letting his real emotions show.

His training reasserted itself and, with a face displaying controlled distress and concern, he fell to the duty of fielding the questions which those who had spotted him as the man-in-the-know were wittering at him. ‘No, Sir Nicholas was in excellent health.’

‘Yes, indeed a great tragedy for the Department.’

‘Certainly – an appalling shock for his family.’

‘Yes, a wife and son.’ No one had anything worth saying and he was no better. Of all groups to be faced with a stiff on the doorstep, this had to be one of the least well fitted. Arguments over the statistics of deaths from hypothermia? – fine. Deaths from pneumoconiosis? – certainly. There were no better people to utter appropriately compassionate noises about paper deaths. But an actual corpse – and one which seemed likely to postpone the press conference, and even then deny the lead performers their histrionics? – that was something for which they didn’t have the precedents either.

‘Very distressing’ was beginning to give way to ‘Well, really! Is there any need for us to remain any longer?’ when the Chancellor re-entered, now green rather than white. ‘Lady and gentlemen,’ he said, ‘I regret that I must ask you to remain here until the police arrive.’ Stemming the hubbub of questions and complaints, he continued flatly. ‘Sir Nicholas has been murdered. We will all be required to assist the police with their enquiries.’

Amiss had always dreamed of being present at an event so unexpected that it reduced a group of professional articulators to appalled silence, but murder hadn’t featured among his fantasies. These had tended more to visions of himself leaping on to the table and telling all those present what a collection of self-satisfied old farts they were. Even if his was not a central role, at least he now knew that even they could be dumbfounded; not even Alf or Puffy could produce a suitable word. Amiss could only suppose that they were all now engaged in assessing the effect this event was likely to have on their reputations. Presumably, if the murderer had been found all of them would have been let go; they must therefore be suspects. That suggested that Sir Nicholas had been killed very close to this room. Since almost no one working regularly in this building knew him, the suspects in this room had a head-start. It would have been a different matter had he been found dead in his own department. Amiss could off-hand think of about two dozen likely murderers there and about a hundred others who would have cheered them on.