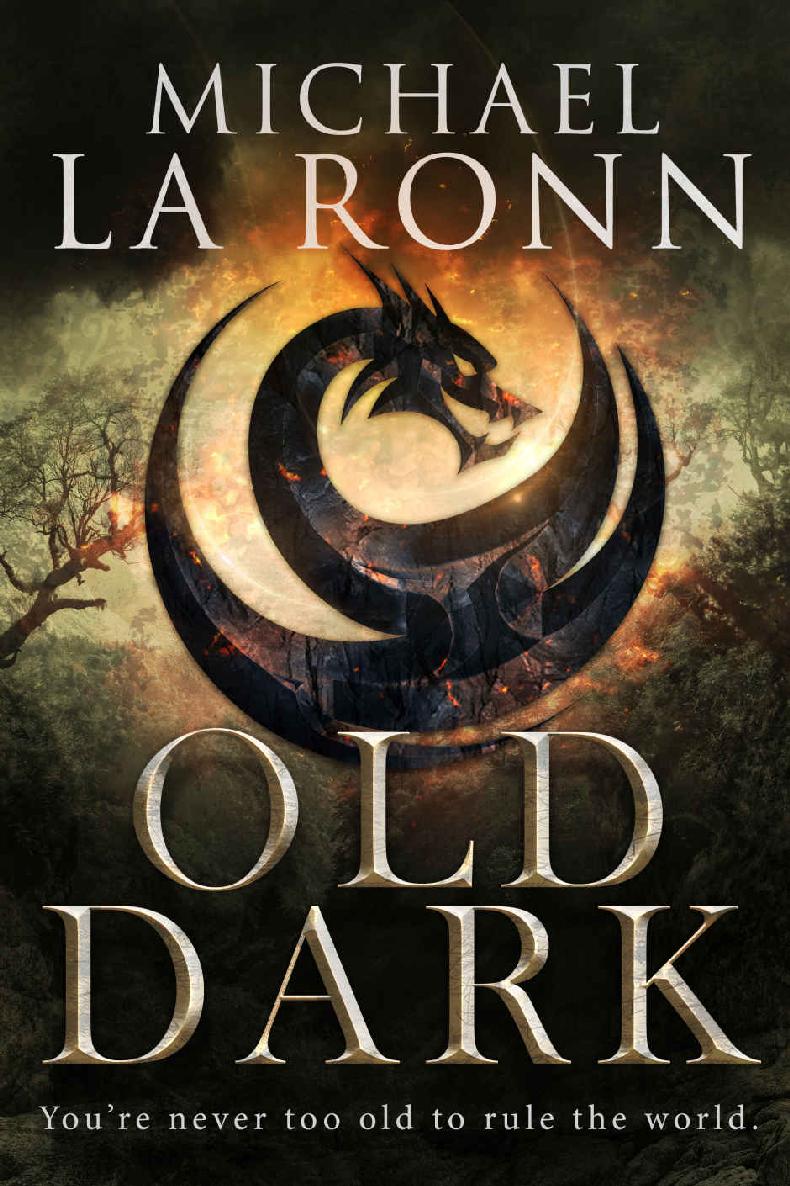 Book 1 of the The Last Dragon Lord Series

This book is a work of fiction. All characters, dialogue, and incidents described in this publication are fictional or entirely coincidental.

No part of this novel may be reproduced or reprinted without permission of the publisher. Please address inquiries to
[email protected]
.

If you want to be notified when Michael La Ronn’s next novel is released and get other cool stuff, please sign up for his mailing list by visiting:
http://bit.ly/1r6kNTG
Your email address will never be shared and you can unsubscribe at any time.

“You have committed a sin against the dragon race. Bring all you have to me so that your society belongs to me. If you do not surrender your home, your piles of ingots, and your reserves of clandestine magic stolen from my aquifer, you will suffer the fate of wood thrown in fire."

The wind whistled around his wings and the stars glittered off his black scales as Dark flapped furiously, pushing a torrent of air toward the ground to cushion him as he touched down on a rickety boardwalk in the middle of his family’s ancestral bog. The boards trembled beneath his weight.

His claws scratched the rotting wood as he stood upright on all fours. The water, like purple velvet wavering in the starlight, seemed to swell upon his presence, sending slow, pulsing ripples downstream. He had prayed just yesterday at the altar of the bone-white mausoleum submerged in brush and shadow in the distance, offering a bloody tribute of heart and lungs to his grandfather in the great beyond, never imagining that it would be the starting point of a hunt today.

Dark folded his wings close to his body until they rubbed against his scales. He reached his long neck down and rubbed his nose against the wood.

He sniffed, taking in the remnants of peat long burned away, decaying fish, flecks of mercury on the water, and the blood and sweat of human slaves one hundred years ago toiling over this bridge. How they had screamed when Dark had struck them down. How they had gasped as the water pulled them under quickly and silently as Dark knelt and prayed.

Intermingled with it all, he sensed something fresh.

Sweat. Gathering in an armpit, pooling on the chest.

Yes, this sweat was recent.

And something else. Cloth. The crude, astringent dye from the northern continent that reminded him of austerity. That telltale smell of all things elven.

He sniffed the edge of the water, dragging up a ragged circle of dead grass on its surface and revealing a murky patch where a black fish darted away in fear.

He lost the scent.

He tracked down the boardwalk with his nose low to the ground. He picked up the scent again about halfway down. It grew stronger the closer he approached the mausoleum, and he moved into a new nebula of scents so powerful he could almost see them wafting among the fog.

He licked the air.

The kind that beaded up on the backs of humans’ necks whenever fear was close. But the scent was slight. Whoever was here hadn’t been here long. Perhaps they were overcome with fear at the sight of the mausoleum—his family’s resting ground, a massive, curved tooth that rose into a patch of navy blue sky. It had been designed for that very effect—to show humans and elves what their place was in this world.

The mausoleum was still locked. The thick marble doors hadn’t been disturbed. The coward Dark was chasing was foolish, but not foolish enough to disturb his ancestors’ rest.

The salty smell veered off into the brush, like the arc of a comet leaving celestial dust in its wake. Dark leaned into the sweaty scent until it grew stronger.

He reached grassy, damp ground. His feet sank into the mud, and he immediately realized his mistake.

Dragon tracks in the mud. That wouldn’t do.

He extended his wings and lifted himself effortlessly into the air, high over the broken treetops. In flying he would lose the ability to track the scent, but he would gain the benefit of higher ground.

The benefit of surprise.

As he took to the sky, he couldn’t help think that this would have been a perfect time for a group formation, two dragons flanking him as he charged in front, grinding his teeth to sharpen them for the meal ahead.

You should let us come with you,
Norwyn had said.

No. I’ll handle this myself,
Dark had replied.

You could be playing into their trap.

You forget who I am, Norwyn.

Dark’s shoulders tensed as he thought of Norwyn, the thin white dragon who served as his advisor. He was the most cautious dragon Dark had ever known. His recommendation to hunt in a group had been valid. Most of Norwyn’s advice was. In any other circumstance, Dark would have listened, taking a pack with him. And they would have hunted like wolves in the mountains of the northern continent: swift, relentless, victorious.

But this was personal. Whoever was running away in the bog below had tried to poison him.

Dark and his regime had been on their normal route and had descended upon an elven village, demanding all their magical goods as part of their monthly tribute. A little elven girl had offered them a dead deer carcass, and Dark had almost sunk his teeth into it when the body glowed.

Fyrldr, a red dragon, was less cautious. He tore into the deer offered to him, and magical venom seeped through his body, killing the dragon in a slow, writhing death. Dark hadn’t been surprised in a long time—very little surprised a dragon lord—but he couldn’t believe his eyes as Fyrldr convulsed at his feet.

Then he’d heard a metallic clink of metal and frantic footsteps behind him.

Dark lashed out with his tail instinctively and slashed the elven assailant, drawing blood. The man ran, and before Dark could chase him, the villagers mounted an attack and the man disappeared in a sea of people.

Dark left nothing of that village.

He couldn’t let such a blatant attack go unpunished. It could not be known that he, the great Dragon Lord, Dark the Wicked, had almost been poisoned like his parents before him.

This coward running through the bog needed to be ripped apart, if only to teach the rest of the world that its lord was invincible.

A faint glimmer crisscrossed through the trees. Dark almost missed it, but it floated horizontally in the vertical patch of birches, against the grain of nature.

Dark knew that glint. He recognized it from all the wars that he’d been in, flying over the battlefields as his dragons fought humans and elves.

It was a sword hilt. The sword was bouncing up and down in the hand of someone running, making jagged metal cracks against the undergrowth.

Above, a cloud slid away and revealed the moon.

Dark spread his wings and dove toward the glint.

His wings sliced the treetops, and the branches were like knives against his scales. But he pushed harder into the dive and came upon the running man.

Dark swung to the left and around the man, and with a snap of his wings he about-faced and hovered in the air, blocking the moon. He let himself fall, shaking the ground with a tremendous boom.

The man wore a bandana over his mouth and dark green shorts. He lay on his back, flabbergasted as Dark stepped toward him slowly. He was shirtless, with a cursive rune tattoo across his chest. One of his pointed ears was tinged with blood from where Dark had struck him.

Dark growled, blowing a thin cloud of smoke from his nostrils into the elven man’s face. Then he grinned. “Good evening.”

The man placed a trembling hand on the hilt of his sword, but Dark slashed it out of his hand with his claws. The impact broke the bones in the man’s hand, and the crunch reverberated throughout the bog.

“Is this what I have to do to get respect?” the dragon roared, resting his claw on the man’s chest with just enough force as to not break any more bones. “You tried to kill me.”

The wounded man nodded, his chest heaving up and down.

“You magicked a deer carcass. I’ve never seen that before. How did you concoct the spell?”

The man struggled under the weight of Dark’s claw, but a pained smirk crept across his pale face. “We forged it out of the hatred you’ve created in this world.” He spit in the dragon’s eye. “My family is going to finish what we started. Just like we did to your parents.”

This was worse than Dark thought. He had assumed the assassination attempt an isolated incident. There had been many. But this man wasn’t acting alone. This felt organized. If a family was involved, there was a plot.

More than a plot.

His blood curdled at the thought. “Oh, so it’s a family affair.”

Dark dug his claw into the man’s chest and drew out a line of blood. “Tell me, my brave elven coward, what is your family name?”

“And so you’ll disgrace them in death? Don’t I have a right to know so that I may unburden them from their troubles?”

Dark dug his claw deeper into the man’s chest and the man screamed. “Where shall I bury them? I think the bog would be a fitting place. But don’t worry yourself with that. No, my son, we must first decide what I’m going to do with you.”

Dark clutched the man in his claws and stomped to a nearby pond. He held the man’s head over the water. “Should you drown? No. That would be far too weak a punishment. It would make me look ineffectual. Can you imagine what my dragons would say? They’ll say, ‘My Lord, of all the possible ways you could have crushed this elven boy, you let him drown?’ And what will I say in my defense? Nothing! I’ll look soft …We can’t have that, not in light of your little scheme. At a time like this, it is important to look strong, stronger than ever before. One must have strength that seems to come from the heavens!”

Dark slammed the man to the ground and pinned him by the neck with his tail.

“There’s a meal that’s worth making from you,” the dragon said, laughing. “I could call it coward soup. Grind you up and feed your bones to the desolate, hungry children in another elven village.”

“My bones will give them strength.”

“Wouldn’t that be gruesome?” Dark asked, ignoring him. “But they’ll say, ‘My Lord, that was far too cruel. Now the elven villagers will rise up again, though they have no food in their stomachs, and the humans in their pastures will hate you, and they’ll kill their dumb cows just so you can’t have them,’ and so on … My advisors, I mean. I can’t seem to do anything in this world without considering the political consequences. It’s a downside to being the dragon lord.”

Suddenly, Dark stopped speaking and took the man’s arm in his mouth. With a quick, ragged motion, he ripped it off. Blood spilled down his lips as the elven man lay in a bloody pool.

Dark licked at the blood and let out a sigh. The taste energized him, made him delightful with rage. The hot blood rolled across his tongue and he roared, reveling in the sound of wilderness and strength and revenge and closeness to the earth.