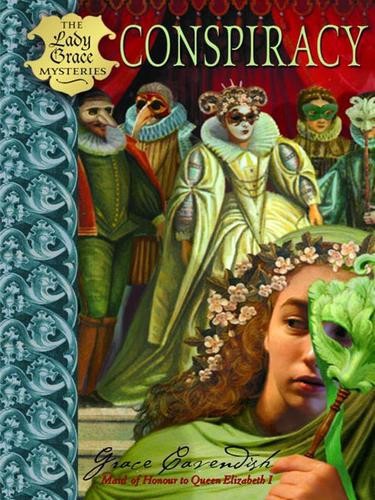 To Ben and Teazle—my family

MAID OF HONOUR TO HER GRACIOUS MAJESTY

QUEEN ELIZABETH I OF THAT NAME

AT THE QUEEN'S COURT

And here have I another daybooke and five fine new quill pens from the feathers of one of the geese, and the Queen has given me a new bottle full of ink, made with crystal and chased with gold, and it has a stopper that locks. She gave it me on condition I do no more writing when wearing my white damask gown. Not even if I am very careful. We have unpicked the piece that somehow got ink upon it and put a new piece of white damask in—I think it looks very well, though Mrs. Champernowne grumbled that the colour was a little different.

I am writing this as I sit upon a big chest full of
clothes, wearing my black wool kittle, which will take no harm from ink at all, so fie on you, Mrs. Champernowne.

Olwen, Lady Sarah's tiring woman, is trying to pack all Sarah's little pots of face paint and unguents, but Lady Sarah keeps unpacking them again. She has a new spot on her chin, and she is searching for an ointment her mother gave her yestereven—of goose fat with a burnt mouse's tail mixed in it—sovereign against all blemishes.

Mary Shelton is nibbling at some gingerbread and watching. “Did you never think that perhaps it is all the creams and elixirs you use that give you so many spots, Sarah?” she just asked.

Sarah only tossed her head and made a
“Ptah!”
noise, though I think Mary has a point.

When we leave the Oxeys' house, the Court will move to Kenilworth, which is my lord the Earl of Leicester's chief residence—the Queen gave it him five years ago. It is very exciting—my lord of Leicester is Master of the Queen's Horse and her best friend and he organizes all the revels and processions and ceremonies for the Court and so we are looking forward to wonderful entertainments at his own residence. My tumbler friend Masou will be performing. He has already gone ahead to make ready.

I love being on progress. Although it is tiresome to have to share a chamber with all five of the other Maids of Honour. Lady Sarah constantly fusses over her face paint—of course, I am used to that—and bickers with Lady Jane Coningsby. Carmina Willoughby and Penelope Knollys gossip incessantly like noisy geese. And Mary Shelton, with whom I share a bed, snores most horribly and keeps me awake half the night. Nevertheless, even if it were not a way for the Queen to see her people, feed the Court at the expense of her nobles, and allow the London palaces to be cleaned and whitewashed, going on progress would still be the finest way to spend the hot summer months when London is full of plagile.

. I don't even mind all the riding from one house to another with the rest of the Court cavalcade, because all of us Maids of Honour ride nice steady amblers and we each sit behind a groom on pillion seats. Lady Jane Coningsby, who is a good rider, complains that it is too tedious for words, but I feel much better with another controlling the horse. Somehow, whatever I ask a horse to do, I find it always does the opposite.

The Queen says I am too soft with my horse and do not make it obey me, and that is why my mounts
always act so froward and unseat me—or run away with me!

Lady Sarah is now squinting to put on her spot cream by the light of one small candle. As her creams usually do, it smells very nasty despite having heal-all pounded into it as well as the mouse-tail ashes.

My dear friend Ellie, the laundrymaid, just went by with her arms fall of sheets and rolled her eyes at me over Sarah. One of the best things about being on progress is that I can borrow Ellie from the laundry and have her with me as my unofficial tiring woman. She is currently making herself useful by helping Olwen pile the sheets into chests, while Olwen mutters to herself, “Wherefore six sheets and nine smocks and every one of them used? Ah, bless you, Ellie, they can all pack here, look you, and then we shall have space for the pillowcases. …”

One of the men from the Removing Wardrobe of Beds has begun to take down the bed curtains. Usually they wait until we are all gone but they want to be off soon. The Removing Wardrobe has two sets of everything, so while we are in Kenilworth they will be going to our next destination and setting everything up again ready for the Queen.

Now the other two men are on ladders, unpegging
the tester-frame and the posts, and carrying bed parts through the passageways and out into the courtyard. I can see the carts waiting by torchlight, with the horses still munching in their nosebags and stamping their huge hairy feet.

The Queen's Chambers are the last to go. The men always wait until she is gone before they start dismantling them and taking down the frames of brocade from the walls. When everything is ready we will go and attend upon her. Oh, no, not again! Sarah picked up another pot—with ground talcum in it this time—and a swansdown puff to carefully powder the end of her nose.

“Will you kindly be giving me that, my lady?” Olwen snapped, picking up the pot and holding her hand out for the puff. “You shall be late for attending upon Her Majesty, look you. …”

“But my nose is all shiny again,” Sarah said with a pout. “I'll just—”

Olwen has just tutted and nipped the swansdown puff out of Sarah's fingers, because Mrs. Champernowne, Mistress of the Maids, has come bustling in.

“Where are the Maids of Honour?” she is saying. “Come along with you, now. You should have been ready to attend Her Majesty ten minutes ago!”

And so I must put my beautiful new daybooke and my penner away in my embroidery bag to attend the Queen—I wonder what she will be like today. She hates mornings but she loves progresses, so it is like tossing a coin.

We have now stopped for dinner at a gentleman's manor house, near the village of Charlecote. The gentleman who owns the house is making a speech at the moment, which is full of Latin and Greek and immensely boring. The Queen can sit and smile and look attentive for hours on end, but I can only survive by pretending to make notes on the speech, as I am doing now, while actually writing in my daybooke instead.

Luckily, the food is delicious. The Queen's cooks prepared it, and there are spit-roasted ducks in a plum sauce and kidneys in penny-loaves—and strawberries and raspberries, too! Late ones—with cream. I love them. I was going to save a few for Ellie but I couldn't bear it any more and I ate them all up.

We left Oxey Hall so early the sun was just coming up, and we rode through the cool of the morning, which was quite pleasant. My ambler, Ginger,
was very well-behaved for Mr. Helston, my groom. The seat was padded, so I could sit quite comfortably and watch the fields go past—all golden with stubble after the harvest, with haystacks, fat like giant harvest mice, hunched in the corners of the fields. My groom is ancient—at least forty-five—and he talks mainly to the horse and just says, “Yes, my lady,” and “No, my lady,” to me. He sounds as if he has a cold.

We always ride in the same order. Mr. Hatton, the Captain of the Queen's Guard, and his men go at the front, after the harbingers and heralds. And then comes the Queen, riding her beautiful dappled grey horse that came from Hungary, and attended by the Earl of Leicester. He is her Master of Horse, so he is always by her side on progress—and besides, he is her favourite, as everyone knows. Behind and around the Queen ride the various gentlemen she likes to attend on her, followed by us Maids of Honour and all the rest of the Court.

When we passed through villages, the people came running in from the fields and the women brought their children out in their Sunday clothes. They were waiting by the road to cheer the Queen as she rode by. They were full of excitement and pride that she had chosen their village to ride
through, and not the all but identical hamlet a mile away, their bitter rivals since the Romans left.

They stared at the Queen and all of us and talked about us as if we couldn't hear, which can be embarrassing: one woman tutted and said, “Well, she'm a fair maid with her red velvet hood, but from her face she's got powerful indigestion. Looks as if she swallowed a pint of vinegar!” The only one with a red hood was Lady Jane Coningsby. Lady Sarah giggled at that—she hates Lady Jane, who is not terribly popular with any of us.

The Queen is very clever and charming with her subjects and the people love her. When she spotted a baby in his shirt, squealing and waving his little biggin cap, she reined in her horse and the Earl called the halt, looking wary. It certainly was a very sweet baby. He had bright gold hair and big blue eyes and only a little snot on his upper lip. He was looking up at the Queen and roaring with laughter, I think because of all her bright sparkling jewels.

The Queen smiled down at the baby and his mother, who was flushed with pride. He crowed and started clapping, but it looked as if he had only just learned to clap because sometimes he missed and smacked his nose, which made us all smile.

His mother curtsied and held him up to her as high as she could. “And a true liegeman of Your Majesty,” she puffed. “I pray God to bless you with as fine a little lad as he.”

Some of the gentlemen sucked air in at that, for usually talk of babies makes the Queen sad or angry—perchance because some say that, at almost thirty-six, the Queen will soon be too old to have babes of her own, and she doesn't like to be reminded. This time she leaned down to stroke the baby's cheek. He smiled sunnily up at her and grabbed a pearl sewn to her sleeve, which came off in his hand.