Read Coming of Age in the Milky Way Online

Coming of Age in the Milky Way 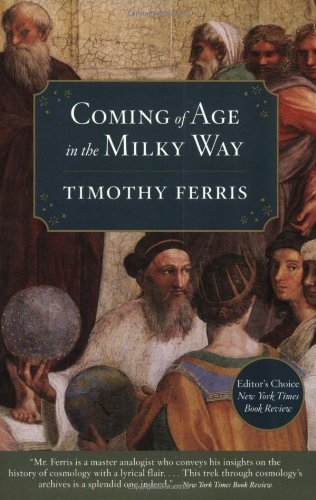 C
OMING
OF
A
GE
IN THE
M
ILKY
W
AY

If I could write the beauty of your eyes
And in fresh numbers number all your graces,
The age to come would say, “This poet lies—
Such heavenly touches ne’er touched earthly faces.”

I
f, as is often suggested, writing a book is like giving birth, publishing a book is like watching one’s child graduate from college. The author hopes that the book will have a healthy life of its own, going off into the world and requiring little more in the way of parental help or guidance. The longer the book fares well, the less the author matters: Such is the apt, implicit bargain struck by parents with their children, and authors with their books.

This author has had occasion to feel proud of this child. During the fifteen years since its publication,
Coming of Age in the Milky Way
has made its way on sturdy legs. Critics have been kind to it, professors have taught it, and readers around the world have proved gratifyingly loyal to it.

So why, now, is the author injecting himself back into its affairs, like a father preposterously hogging the spotlight at his daughter’s wedding?

Principally because fifteen years is a long time in astronomy
and cosmology, during which new and exciting things have happened. Some readers—the professors especially—have asked if a new edition might not be prepared, to update the unfolding story of humanity’s investigations into the nature of space and time. So here it is.

Few revisions have been required to the original book, except to correct a handful of typographical errors and authorial infelicities. Fevered newspaper headlines to the contrary, established sciences nowadays seldom undergo “revolutions” that oblige researchers to “rethink their basic notions” about the cosmos. There have, however, been several genuine surprises, some of which have profound potential consequences. Cosmology appears to be entering a new era, characterized both by a greatly improved ability to probe the history and evolution of the universe and by startling discoveries that open up exciting new vistas on the cosmos. This news of the universe is reported in the Addendum to this new edition, beginning on page 389.

The best news is that human knowledge of time and space continues to expand, shining like a brightening beacon in a world still benighted by ignorance and by the fear, rage, and greed that ignorance fosters. When tempted to curse the darkness we do well to remember that the circle of light is growing. Tending to it are many heroes, ranging from celebrated scientists to unsung teachers whose students may, in time, light a few lamps of their own. Without them, books like this one could not be written.

P
REFACE
AND
A
CKNOWLEDGMENTS

How oft we sigh
When histories charm to think that histories lie!

T
his book purports to tell the story of how, through the workings of science, our species has arrived at its current estimation of the dimensions of cosmic space and time. The subject is grand, and it goes without saying that the book is unequal to it. Of the limitations and liabilities of this work I would hope to defend only those resulting from its brevity. Obedient to the dictum of Callimachus that “a big book is equal to a big evil,” I have striven for economy, but economy has its price.

First, it has of course meant leaving out many things. In a general survey of science it would be ludicrous, for instance, to discuss quantum mechanics without making reference to Erwin Schrödinger, who was one of the principal architects of that innovative and fruitful discipline. My justification is that this is not a general survey. It is a book with one tale to tell—that of the awakening of the human species to the spatiotemporal dimensions of the universe—and owes its loyalties to that theme alone.

In addition to encouraging sins of omission, compression tends to foreshorten history, making it seem more coherent and purposeful than it really is, or was. The real history of science is a maze, in which most paths lead to dead ends and all are littered with the broken crockery of error and misconception. Yet in this book all that is underrepresented, while disproportionate emphasis is devoted to the ideas and observations that have in retrospect proved most salient. A book that assigned a full measure of devotion to the mistakes of science would, however, be almost unreadable: Plowing through it would be like reading a collection of mystery stories of which only one or two came to any satisfactory resolution, while in most the detective switched careers before the identity of the culprit could be ascertained or the butler was irrelevantly run over by a bus.

Similarly, in recounting the long-term development of enduring conceptions one tends to assign missions to people that they did not have, or did not know that they had, at the time. Thus Maxwell becomes the father of unified theory, Fraunhofer a founder of astrophysics, and Einstein the theorist who anticipated the expansion of the universe, though there is no evidence that any of these men ever got up in the morning with the intention of doing any such thing. As Thomas Carlyle wrote, “No hammer in the Horologe of Time peals through the universe when there is a change from Era to Era. Men understand not what is among their hands.”
1
But history, as they say, is comprehended backward though it must be lived forward, and when we examine our predecessors we bring our own lamps.

Economy also implies simplification. This book is intended for general readers. It keeps mathematics and jargon to a minimum—such technical terms as seemed unavoidable are explained in the text and the glossary—and in so doing sometimes warps the very concepts it seeks to explain. Where the distortion is excessive or ill-advised the fault is of course entirely my own, but much of it results from a change of perspective: Relativity and quantum mechanics and cosmology look different to a lay observer than to a practicing scientist, just as the experience of making an Atlantic crossing on a cruise ship is different for a passenger than for a stoker in the boiler room. On the other hand, I have tried in general not to oversimplify, preferring that a subtle idea remained subtle in the
retelling rather than hammering it so flat as to make it appear trivial or self-evident.

Much the same applies when it comes to ambiguities and disagreements over the facts of our intellectual heritage and their interpretation. The history of science is full of disputations about such questions as just why Galileo was persecuted by the Roman Catholic Church or whether Einstein had the Michelson-Morley experiment in mind when he composed his special theory of relativity. Having tiptoed through more than a few of these minefields, I am full of admiration for scholars who choose to habituate them. Nevertheless, I have devoted little space to detailing the contrasting arguments they have set forth. If the resulting narrative is unambiguous it is also skewed, and can claim to be accurate only insofar as I may have succeeded in supporting or inventing a point of view that may itself prove to be accurate. Here endeth the confession, with the plea that economy is a jealous god.

I am grateful to Prairie Prince for the line illustrations that accompany the text. For research aid and secretarial assistance at various stages along the way I am indebted to Eustice Clarke, Dave Fredrick, Russ Gollard, Michele Harrah, Sandra Loh, and Camille Wanat, and to the exertions of librarians too numerous to mention at the American Institute of Physics, Brooklyn College of the City University of New York, CERN, Caltech, the Federal Polytechnic Institute in Zurich, Fermilab, Harvard University, the Massachusetts Institute of Technology, the Mount Wilson and Las Campanas Observatories, New York University, Princeton University, the University of Southern California, the University of California at Berkeley, and the public libraries of New York City, Los Angeles, Chicago, Boston, and Miami.

My thanks go as well to my mother, Jean Baird Ferris, for her lively conversation and steadfast encouragement, her tireless proffering of intriguing clippings and articles, and for having taught me, as a boy, to love and to live by books.

Finally I should like to express my gratitude to my wife and family, for their loving and generous forbearance through the long years of long hours that writing this book consumed.