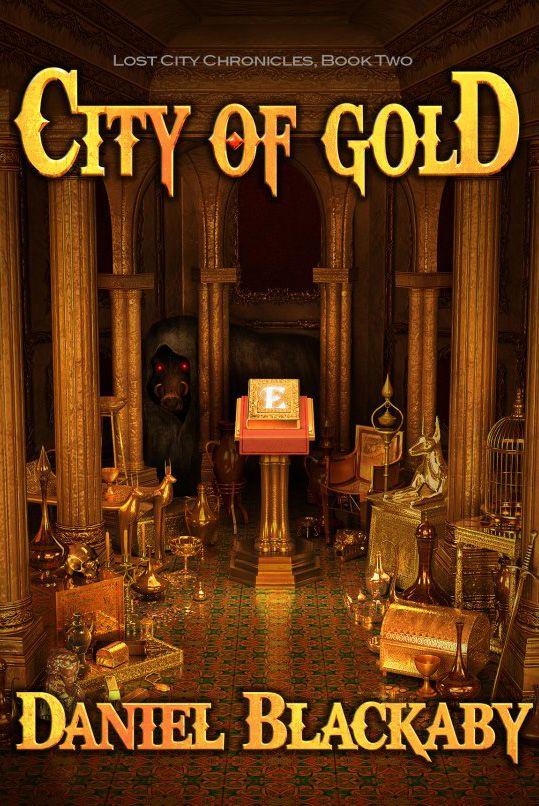 Praise for the
Lost City Chronicles

“This inaugurates a trilogy that young fans of the fantastic will like for its fast-paced action.”

“Betrayal, deception and danger are in every corner . . . this is a series that will have you engaged and drawn in!”

“This is a page turning thriller. . . . I am impatiently waiting for the next book in the series.”

This book has a slight C.S. Lewis or Ted Dekker feel …”

“Combines energy, creativity, and familiar fantasy characters and tropes that will appeal to readers.”

All rights reserved. No portion of this book may be reproduced, stored in a retrieval system, or transmitted in any form or by any means © electronic, mechanical, photocopy, recording, scanning, or other © except for brief quotations in critical reviews or articles, without the prior written permission of the publisher.

This book may be purchased in bulk for educational, business, ministry, or promotional use.

King of the Mutts.

May your bark be ever fierce.

THEY WERE COMING. He felt it in the marrow of his bones as clearly as the breath hastening over his lips. Fleeing was pointless. He would be caught; he had foreseen it. But he was prepared for this day.

The pattering of footsteps echoed through the tunnel. Time was short. He glided across the room to where a lone table rested against the damp rock wall. He smiled; he had constructed the table with his own hands—many years ago. He ran his fingers across, caressing the brittle surface as its legs wobbled beneath.
We’ve grown old together, haven’t we?

The approaching footfall grew louder. With a deep sigh, the elderly man grasped the object resting on the table. He gazed at it longingly, as though looking into the eyes of a loved-one for the last time. He had no doubt that it would, indeed, be the last time.

Cradling the object against his chest, he lowered himself into a wooden chair. His eyes focused toward the room’s lone entrance where flickering light, growing brighter and brighter, bounced off the walls. His solitude had been compromised. He allowed his weary eyelids to droop over his pupils; he could do nothing but wait.

The faint sound of the intruder’s steady breath prickled the hair on his arms. The trespasser, concealed only by the pirouetting shadows, now stood motionless in the entrance. The elderly man felt a small grin hijack his aged face; his visitor’s eyes sweltered with flame.
The recklessness of youth.

“Are you here to kill me?” he asked calmly.

The man nodded. “I am,” he uttered without hesitation.

The old man motioned to the object in his lap. “The conviction of your mouth has yet to take hold of your muscles, boy. Why delay what is so certainly to be? I am ready to accept my destiny. Are you?”

The figure in the shadows shifted. “Do not mistake my lack of action for hesitation or mercy, for I am friend to neither. As a gentleman of honor, I owe any man I execute, and there have been many, the satisfaction of knowing why. Is this knowledge not desired?”

The old man chuckled. “What good is knowledge to a corpse? I know what drives you; you seek the truth, and find it you may. But spare me one more question, boy.”

The old man bent forward, pointing a boney finger toward the stranger. “If the truth you obtain turns out to be not what you were searching for—what next? There is no rewriting the truth. Are you prepared to accept what you find?” He reclined into the chair. The man in the entrance shuffled once again.

“Unfortunately, my crusade for truth no longer concerns you. The more appropriate question seems to be whether the truth
you
have found is one worth dying for?” A shimmer of light glimmered off the metallic pistol as it emerged from the shadows.

A shiver trickled down the old man’s spine. He gazed at the object in his lap once more. Raising his eyes to the intruder he spread his arms like the wings of an eagle. “There is a time for summer and a time for winter. Life is but a vapor in the wind. Live well, boy. Live well.”

The deafening crack of gunfire was echoed by a thump as the old man’s lifeless body crumpled to the floor. A trail of blood stained his wrinkled forehead.

The assassin emerged into the light and stood over the body. Two more shots rang out in the small room. He lowered his smoking pistol.
Senile old man.
Bending down, he retrieved the object that had fallen from his victim’s lap. He stroked his hand across it; he had waited a long time for this moment.

Reaching into his pocket he pulled out a smooth silver disk. With a soft pop the object split in half, revealing five dime-sized notches. The fingers of his right hand slid perfectly into the holes. There was a low drone as he brought the metallic device to his ear. The moisture in his mouth evaporated and his heart jumped as the tone ceased.

The assassin inhaled slowly. “The deed has been accomplished.”

The sound of puffing smoke crackled against the device before a response came. “And, The Thirteenth?” the speaker questioned, equally void of emotion.

“Eliminated. That which was his is now ours.”

“Did he beg for mercy?” questioned the cold voice.

“Yes, master. Like a whimpering pup,” replied the assassin. The lie produced the desired effect. The killer could feel pitiless pleasure oozing like tar through the apparatus.

There was a silence before the master spoke again. “Well done, Dunstan. Your service and obedience to CROSS will not be forgotten. The day of justice is within our grasp. The bloodshed between Atlantis and El Dorado is only the beginning. The truth at last will be unleashed upon the land. You have done well. Don’t lose my trust.” Static once again sounded in his ear.

Dunstan returned his gadget to his pocket. With a final glance at the face of the corpse lying on the floor, he turned and disappeared. Silence once again engulfed the small room, leaving only the bitter stench of blood to testify to the violent event. Dunstan knew the balance of power had shifted and the order of the cosmos had been violently hurled into limbo. And, yet, the world remained blissfully oblivious.

Dunstan chuckled.
Oh, but they will know soon enough. The Day of Reckoning is coming.

THE PHANTOM DASHED DOWN the abandoned alleyway, blanketed under the shroud of midnight. He cast a quick glance over his shoulder to confirm he was not being followed. Reaching the end of the lane, he threw his back against the stone wall and peered out at the comatose courtyard. It was eerily tranquil—and that worried him. He carefully scanned his surroundings for any sign of life. He halted—his suspicions affirmed.

Two sentries paced militantly across the lofty wall overlooking his position. Both were garbed in full battle armor and broad swords dangled by their sides. He crouched down low against the wall; he would have to be cautious.

With trance-like silence, he scampered from the alley before taking refuge behind the base of a fountain that dotted the middle of the courtyard like a bulls-eye. He held his breath.

The sound of the guards’ casual conversation floated down to him, assuring him that he had remained undetected. With another deep breath, he scurried out of the courtyard. Passing under a large arched gateway, he ducked down low in the shadows cast by the wall. He could now see his destination before him; his mission was almost complete.
Just a little farther.

Suddenly his ears spiked—somebody was approaching. Quickly inching farther into the haven of the shadows, he locked every muscle. Seconds later he was looking at the hefty silhouette of a man, the outline of a double-edged axe resting against his shoulder. Another man appeared beside the first, both inspecting their surroundings.

“I’m telling you…all the captain told me was that it was urgent. Think it’s an attack?” asked the first in a gravelly voice.

“Anything is possible these days. Perhaps it’s a spy or an assassin. Let’s have a look around. Stay alert,” suggested the second. The larger guard grunted in affirmation and they set off, turning out of sight from the concealed figure.

The phantom readied himself. If he timed it correctly, he could make it with one final dash.

He could feel the cool damp air rushing through his hair as he bolted into the clearing, moving closer and closer to his target. Out of his peripheral vision he observed the shapes of the two guards, both walking the opposite direction. He had made it…
UMPH!

A sting against his chest sent him tumbling to the ground. Two firm hands ripped through the dark and clutched onto his collar. Before he could reorient himself he was jostled up. His back stung as it was slammed against a solid stone wall.

“I’m disappointed,” spoke the captor slowly. “I thought we had a deal. You gave me your word.” The grip on the detainee’s collar loosened as the man released a weighty sigh. “But it seems that you, Cody Clemenson, are going to require a
much
closer watch.”

Cody rubbed his throbbing chest where the man’s arm had struck. “Was the tackle
really
necessary, Dace? How did you know what I was doing tonight?” asked Cody irritably.

The handsome captain gave a roguish smirk. “Because fate seldom befriends the untrustworthy, my young, scheming friend. As it happens, the Queen has summoned another red-eye war council tomorrow; I was tasked with informing you but found your room abandoned. As this is now your
fourth
attempt to flee Atlantis, it didn’t take much to hunt you down. Now, let us go before anyone else witnesses their savior Book Keeper fleeing the city.”

“How much longer do we play this game, Dace? You gave me
your word
, remember? The night of the ambush, the night…they took her,” Cody replied, his voice distant. “You promised me we wouldn’t abandon her to the enemy. It’s been almost
two weeks
since Jade was stolen from me. Two weeks! How do I know she’s safe? How can you, in honest conscience, expect me to attend a relentless parade of pretentious councils when it’s
my
fault she’s gone!?” yelled Cody, his rage awakening from its shallow repose.

Dace gave Cody’s shoulder a sturdy squeeze. “You
know
my word is good. We
will
rescue Jade…but not tonight. Passion does not negate wisdom. One more council. Besides, you can’t abandon me. Without you, I’m deserted to withstand the dreadful ramblings of the politicians alone! Come on champ, I sent my superior to jail, wrongly I might add, for your sake. Stay another night for mine.”

After a moment of silence, Cody sighed. “One more night.”

Neil, Louisa - Pyxis Island Triangle (Siren Publishing Ménage And More) by Neil, Louisa
Blown Away (Rogues Shifter Series Book 4) by Gayle Parness
The Bitter Road to Freedom: The Human Cost of Allied Victory in World War II Europe by William I. Hitchcock
Three Months and You're Mine (In Too Deep) by McMillin, Casey
Sharky's Machine by William Diehl
Local Girls : An Island Summer Novel (9781416564171) by O'connell, Jenny
The Nine Lives of Chloe King by Liz Braswell
My Life From Hell by Tellulah Darling
The Autumn Throne by Elizabeth Chadwick
Wintercraft: Legacy by Burtenshaw, Jenna