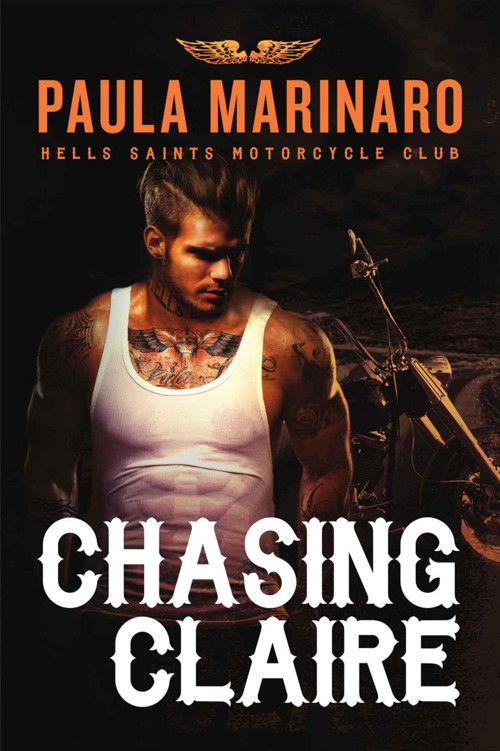 This book is dedicated to my very own Harley Man . . . my husband and the absolute love of my life, Pasquale Marinaro.

And I was feeling that pain everywhere.

The small muscles in my upper arms ached from lifting the heavy trays. The larger muscles in my lower back screamed from being bent and stretched. My left ankle hurt where I had twisted it. And despite the pain relievers that I was downing like candy, my headache just kept getting worse.

If the fat guy sitting in the second booth near the door called me over
just one more time
to stare at my tits, wink at me, and order “one more with lots of head, darling,” I was going to pull open that dirty mouth of his and pour an entire pitcher of beer down his throat.

Usually I didn’t mind helping out at Ruby Reds, but enough was enough.

I looked around at the sea of fools who occupied the red and black leather booths, and wondered where the hell they all came from. Crownsmount wasn’t exactly a booming metropolis. It was a small town, nestled among some other small towns, with the major city about fifty miles east. But the area did support two private colleges, so I guess the tequila bar had become a draw.

Ruby Reds was owned by the Hells Saints Motorcycle Club, which had been founded and was now run by my surrogate father,
Prosper. Though we lived in the Southeast, there were chapters all over the United States. Just recently, the Saints had also expanded into Europe. In an effort toward more legitimate business practices, my sister’s husband, Diego, had recently been named vice president.

I emphasize the word
effort.
This not-so-merry band of outlaw men still had a long way to go before
legitimate
could apply to them, however loosely the term was used. But Prosper Worthington was a smart guy with a somewhat ironic sense for business, and under his rule the Hells Saints MC had made some strong alliances with like-minded criminals. Financially speaking, at least, they had come out the better for it. So I had to give them props. I didn’t know much, but from what I had seen from the corporate side of it, my adopted family of badasses were doing okay.

What seemed like a lifetime ago, my sister and I had found ourselves in a dangerous place and had gone to the MC for help. After things had been made right, we decided to stay on. It might not have been perfect, but it was safe, and it had been just what we needed. As it turned out, staying on had come with its own set of complications. A set of complications that I tried hard not to think about, because when I did, it made my head swim and my heart ache.

A stint in rehab, a few dead folks, a couple of kidnappings, one really scary car chase, and the dramatic, premature birth of my first niece were just some of the highlights that had taken center stage during our time with the club.

Yeah, my life had never been what one might call quiet, or even close to anything that could even remotely resemble normal. But in the past couple of years, I had found myself in situations that trumped even my low expectations for a shot at an average life.

And it wasn’t just me.

I could also add my best friend and roommate, Glory, to the pot of hot mess. Glory had the unlikely distinction of being a former all-nude dancer, turned recluse, turned fisherman. And I had
the strong feeling that the evolution of Glory had just begun. The thought exhausted me.

And then there was Reno. He was where the heartache came in.

Reno and I had been . . . hell, I had no idea what Reno and I had been. But for a while it had been good. Really, really good. And then it wasn’t anymore. The thought of him made my eyes mist and my heart hurt. I was pretty sure that it was my fault that things had gone the way they had, but I just didn’t know how to make them right. And, really, I didn’t even know if he wanted things to work out between us. I only knew that whatever it was that Reno and I had been working toward, we weren’t doing that any more. Sometimes I missed him so much that it was hard to breathe.

The other thing
invaded my dreams.

Try as I might to avoid it, in the past year or so, my life had taken on all the elements of a Greek tragedy. The determination that it took for me to rise above the doom and damnation wore me out and sapped all of my strength.

But I wasn’t beat, yet. I was a Winston woman, and if nothing else, that was enough to get me through.

I took a look at the clock. I had fifteen minutes left to my shift, then I was free for the weekend.

I
pulled off my apron and made my way toward Raine’s office in back of the bar. Attached to it was a large, well-lit bathroom. Inside of that bathroom was a shower that supplied enough hot water to keep me happy.

A shudder of pure pleasure shot right through me as I felt those stinging jets of full-on heat hit my sore, tired muscles. I laid my palms flat against the tiles, bent my neck under the spray, and let that steaming water run straight over me. Sighing, I felt a gradual release of the tension that had permanently taken up residence in my overused, tired, bunched-up muscles.

Reluctantly, I stepped out of the hot shower and into a cloud of fragrant steam. I took the thick cotton towel and rubbed my skin hard, feeling the blood flow back into my tired body. Starting with my legs and working my way up, I massaged in some lightly scented body lotion until I began to feel somewhat human again. The fragrance was called “In the Midnight Garden.” It had been a favorite of mine for years and it was the one luxury that I consistently treated myself to. I didn’t always take the extra time to use it, but when I did, it enveloped me in the soft scents of yesterday. The smooth, creamy mix made me think of the past. Both the good and the bad.

In the Midnight Garden reminded me that no matter how bad things seemed, they could always be worse.

Making a strong effort to hide the dark blue, telltale smudges of lost sleep, I grabbed every girl’s best friend, otherwise known as concealer, and dabbed a little under each eye. Then I brushed on some mascara and covered my lids with a light coppery shadow. I rimmed my baby blues with twenty-five dollar eyeliner, and tinted my lips with gloss.

Tipping my head forward, I flipped my hair upside down and dried it for maximum volume.

Satisfied that the strong effort would bring strong results, I stood back and looked at myself in the mirror.

With a heaping helping of disappointment.

The artfully made-up eyes that stared back at me still looked troubled. Turning away from the mirror, I let out a heavy sigh, wrapped the towel tighter around my too-thin body and rifled through the duffle bag. I pulled out my underwear, jeans, and the T-shirt that I had packed before I left for work. I always changed and showered after every shift, even if I was just going home. The greasy oil from the fryers, the spilled beer, and the piles of cash I handled all day long made me feel like a breeding ground for microorganisms. Even if that wasn’t the case, today was special and I did not want to take a chance of passing on any germs to my niece.

Today was Willow’s first birthday, and I was number one on the celebration committee.

After slipping on my bra and panties, I pulled the T-shirt over my head and tugged on the loosely fitting Levis. All my jeans hung a little too low on my hips now. But there were worse things than dark circles and baggy pants. So, pushing those worse things aside, I zipped and belted. Then I combed my long hair into a loose side braid. After stopping at the bar to grab a cold one, I headed out.

It was only a short drive before the busy, two-lane highway turned into an easy single stretch of road. From there, the asphalt eventually made its way to a long, smooth, graveled private lane leading to Diego’s property. I thought about my adorable niece. She was still so precious and new to this world. With her little Buddha belly and big blue eyes, she was love wrapped up in a soft pink blanket.

Despite a rocky start, Willow would have a good life. My sister would make sure of it, no question. Of that, I was absolutely certain. And that certainty brought me back to a place I rarely visited, the dark alleyway of my own childhood.