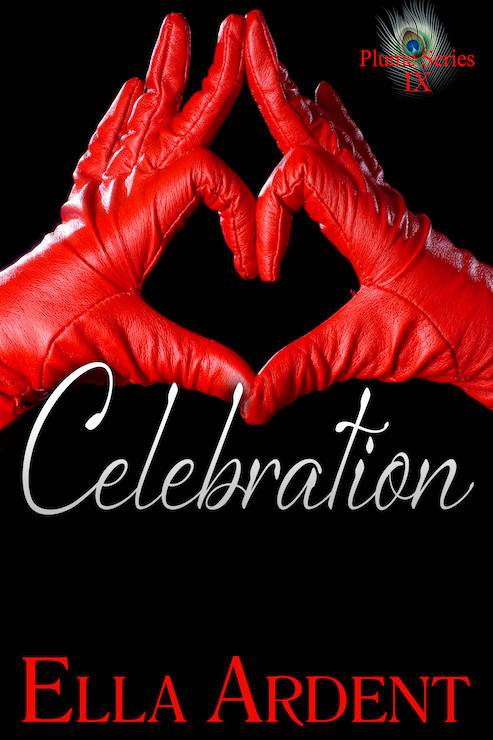 Ninth (and Last) in the Plume Series

Welcome to the Plume—where members are bound by desire

Without limiting the rights under copyright preserved above, no part of this book may be reproduced, stored in or introduced into a retrieval system, or transmitted, in any form, or by any means, (electronic, mechanical, photocopying, recording, or otherwise), without the prior written permission of both the copyright holder and the publisher of this book.

“I’ll never make it,” Mike said, then smiled at Joanna. “As much as I like the idea, I know my limitations.” They were in the apartment that Joanna had located and rented, surrounded by the incredible number of boxes that the movers had delivered that day.

Joanna liked how well they were working as a team. She’d spent a couple of weeks on the west coast, orchestrating their move and getting to know the city, while Mike found his footing at his new job. Joanna had also been looking for a job herself, but she knew that hunt would only become serious after their wedding.

Joanna laughed. “I don’t believe it. I thought you could do anything.”

She gave him an appraising look. Mike always looked good, but Joanna liked when he was a bit disheveled as he was now. He was wearing jeans and an old T-shirt, both of which were faded to softness and tight enough to show that he worked out often. His muscles were a bit pumped from moving furniture and boxes around. One good look and even she was doubting the merit of her idea. “Well, I was sure you could do anything sexual.”

“I hear doubt. Time to deal with that,” Mike threatened. Joanna laughed as he stalked her from across the room, intent gleaming in his eyes. Joanna pretended to try to evade him, but she didn’t try very hard. In moments, he’d caught her around the waist and backed into a stack of cartons in the corner.

Mike grinned. “Man like woman. Man take woman.” He speared his fingers through her hair, then kissed her slowly. Far from the claiming kiss of a caveman, his was seductive enough that Joanna wanted to be claimed. His tongue moved against hers as his hands roved over her body, his touch both possessive and passionate. Joanna couldn’t resist. She wrapped her arms around him then rolled her hips against his, inviting him to take more.

Their kiss heated up, just as she’d expected, and Mike crushed her into the boxes. Joanna locked her hands around his head and kissed him hard. His hands were under her T-shirt and he had her bra unhooked in record time. He dipped his head to suckle her and Joanna leaned back even as she gave a little moan of pleasure.

“We could celebrate finding this apartment right now,” Mike whispered against her skin.

“You’re trying to change my mind.”

“Damn right.” He flicked his tongue across her tight nipple, sending a jolt of desire through her body. His hands were on the front of her jeans and Joanna moaned softly as his warm fingers brushed her belly. “Now,” he whispered, then ran a row of kisses down to her navel.

Joanna was tempted, but her flight was in just a few hours. She wanted to ensure that everything was done first, because she wouldn’t be back until after the wedding. “We could finish unpacking first,” she said as he eased her jeans open. “The bed needs to get assembled, then I can put on the sheets.”

“I’m good with the floor,” Mike murmured. He pushed her jeans down over her hips, then locked his hands around her waist, turning his attention to Joanna’s other nipple. She could feel the erection straining his jeans against her bare skin and wanted more. Mike knew it, too. His teeth grazed the taut peak, making Joanna gasp. “I like to improvise.”

Joanna was almost seduced, but she braced her hands on his shoulders instead. “You’re changing the subject,” she said, pretending to be stern.

Mike grinned. “I’m trying to show you the benefits of
not
being chaste.”

“I think that holding off from now to the wedding would make our wedding night more special.” Joanna stole a quick kiss. “More explosive.”

Mike kept her pinned against the cartons as his hands slid into her jeans. He grabbed her butt and squeezed. “It’ll be explosive enough.”

“I’m going to be leaving tonight anyway,” Joanna said, trying to be coherent. “And it’ll be almost two weeks before you come home for the wedding. It won’t be that hard.”

Mike gave her a wicked look. “I’ll be very hard.”

“And once you’re back in town, we’ll have the rehearsal and the stag and the wedding.” Joanna closed her eyes as Mike’s fingers trailed between her legs. “It’ll really only be a couple of days at the end and they’ll be busy days anyway.”

“And now. But my flight’s in a couple of hours. There’s not enough time.”

“You could stay another night.” Mike held her gaze as his fingers moved against her wet labia. Joanna gasped when he touched her clitoris, unable to stop herself from making a sound.

She also couldn’t stop herself from parting her legs to give him better access. Mike smiled. “You’re not helping,” she whispered.

Joanna gestured to the apartment. “But there’s so much to get done.”

“Nothing more important than this,” Mike growled against her throat. “What if we’re chaste until the wedding
after
tonight?”

“When we’re a thousand miles apart.”

Joanna laughed a little. “But not so impressive an achievement.”

He looked into her eyes. “Why don’t you stay another night, just to take the edge off?”

“Because I have to go to the last fitting tomorrow for my dress, and check with the florist, and go over the guest list with my mom...” Joanna’s list became a soft moan and she forgot whatever else had to be done the next day. The way Mike’s fingers were sliding slowly across her puss was making her wonder why she’d ever thought that being chaste before the wedding would be a good idea. “You’re trying to talk me out of this,” she protested.

“I’m feeling persuasive,” Mike whispered against her throat. His fingers made her catch her breath.

“What if I promise to reward you?” she asked, her voice breathless.

Mike chuckled. “I could take that reward right now.” He pinched her clitoris between his finger and thumb, then rolled it so that Joanna was dizzy. “But we can negotiate.”

She was rubbing herself against him, thinking of all the ways he could please her and punish her. “I’m having very naughty thoughts, Mike,” she whispered and he kissed her corner of her mouth.

“Bad Joanna,” he said, the kissed the other corner of her mouth. He squeezed and caressed again, making it harder even as Joanna forgot everything but him.

“Maybe you should truss me up and spank me one last time.”

“Maybe I’ll do just that. At least the apartment comes with blinds.” Mike had his middle finger inside her now, even as he continued to work her. Joanna closed her eyes and hung on to his shoulders, lost in pleasure.

If he blindfolded her now, she’d probably miss her flight.

If he commanded her to do anything now, she’d do it.

Mike nibbled her earlobe, then whispered in her ear. “The people across the way won’t be able to see what we’re doing.” His breath made her shiver. “Or maybe we should open the blinds and let them watch.”

Joanna caught her breath. “I should have picked a place with an ocean view.”

“Too late,” Mike teased and the movement of his fingers made her gasp aloud. “Do you think they heard that?” he whispered and Joanna thrilled at the possibilities.

“The walls in this place are too thin.”

Mike’s eyes danced. “Just adds to the spice, don’t you think? It would be an interesting way to meet our neighbors.”

“Unless you keep me gagged every night.”

“Naughty Joanna,” Mike whispered against her throat, then suddenly straightened and stepped away. He tugged up her jeans and refastened them, while Joanna just stared at him. “Okay, you’re right. We have a deal. Nothing until the wedding night.” Joanna was astonished. She felt both cheated and surprised.

Because Mike had agreed to what she’d asked of him.

He tapped her nose with his fingertip, his eyes sparkling in a way she distrusted. What was he up to? “But if it’s not explosive, Joanna, you’ll be spending the honeymoon in serious discipline.”

“I thought that would be the case anyway.”

Mike laughed. “Then, let’s get to it,” he said with sudden practicality. “There’s a lot to be done.” He shook a finger at her as Joanna stared at him, trying to make sense of her reaction. He was doing what she’d asked and she was so disappointed that she couldn’t even speak. “And kudos to you. You did find a great apartment.” He moved a large box to the closet as Joanna marveled at his change of mood. He opened the box and began to move clothes still on their hangers into the closet. “Even if I would have just bought something right away.”

“It makes sense to learn the city better first,” Joanna said, trying to recover her earlier practicality. Mike was conceding to her. She should be pleased. Instead, she wanted to cancel her flight and pounce on him.

She really needed to be sensible.

Mike had moved the dressers against the one wall so Joanna began to fill them with underwear and T-shirts and socks. “And I’d like to find a job before we buy anything,” she said. There was nothing more practical than money management. “If our income’s higher, we’ll be able to afford a bigger house.”

“That’s the difference between us,” Mike mused. “You always have a plan and I’m usually impulsive.”

Joanna glanced up, wondering if that was why his mood had changed. “Does that bother you?”

Mike smiled so warmly that she knew he had no doubts. “I think it’s great for one of us to be organized.”

She smiled back at him. “And I think it’s great for one of us to be impulsive. It keeps the balance right.” Even if right now, Joanna was feeling that she’d skewed the balance in the wrong direction. She flicked a look at Mike’s jeans and saw that he still had a huge erection. When she met his gaze in surprise, he grinned.

Foley Is Good: -- and the Real World Is Faker Than Wrestling by Mick Foley
Three Lives: A Biography of Stefan Zweig by Oliver Matuschek
King of Ithaca by Glyn Iliffe
A First Date with Death by Diana Orgain
Nightbloom by Juliette Cross
Wilma Tenderfoot: The Case of the Fatal Phantom by Kennedy, Emma
Forbidden Fruit by Erica Storm
Man of Two Tribes by Arthur W. Upfield
The Day The Sun Fell From The Sky by Gold, Amelia
Grace Against the Clock (A Manor House Mystery) by Julie Hyzy