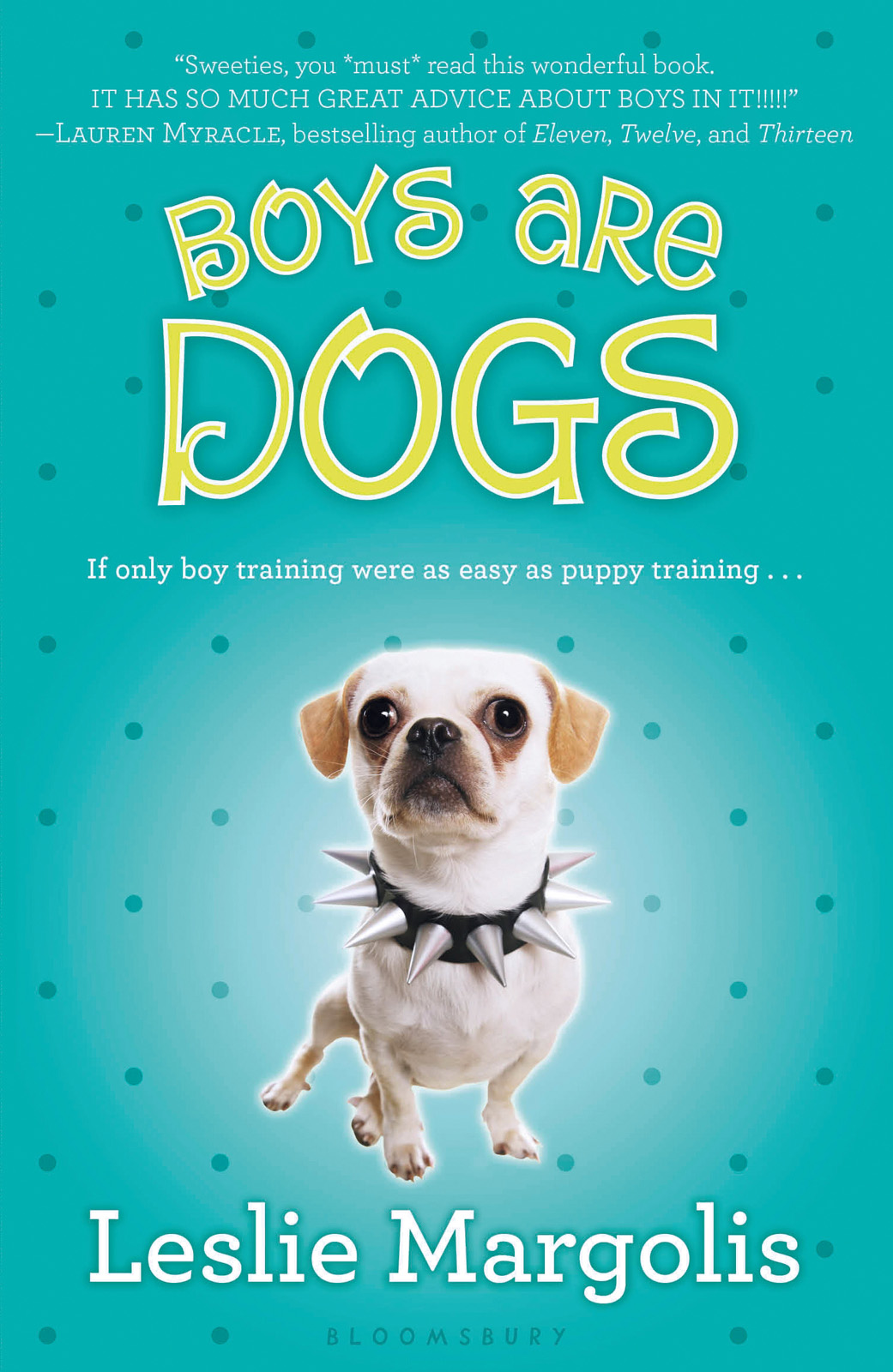 For Jim, who’s like a dog
in only the best of ways

CHAPTER ONE A SLOBBERY SURPRISE

CHAPTER THIRTEEN CUT TO THE CHASE

B
efore Camp Catalina’s first-ever boy-girl dance, all anyone could talk about was the big night.

Here’s what it sounded like in my bunk. (I could tell you who said what, but there’s no point. We all talked like this.)

“We’re lucky the boys’ camp is coming here. Having the dance on our turf will be so much better.”

“Dance with him, anyway. It’s better to dance with a boy you don’t like than with no boy at all.”

“But what if he’s funny looking?”

“What if he smells bad?”

“Or pretend like you didn’t understand the question and run.”

We went on like that for three weeks straight.

My bunk was in charge of planning the dance, and we took our job very seriously. We spent three whole days in arts and crafts making a disco ball out of mirrored tiles and a Styrofoam globe. Then we auditioned our five favorite counselors to see who’d make the best DJ.

On the night of the dance, we pushed the cafeteria chairs and tables out of the way to make space for a dance floor. We decorated the room with streamers and decorated ourselves with cool outfits, cherry flavored lip gloss, and glittery eye shadow.

We looked fabulous. Like movie stars, even. The speakers vibrated with a perfect mix of oldies, pop and hip-hop. We tried out our goofy new dance moves, wolfed down pretzels, and sipped punch. It was a blast. Fantastic. Some even called it blast-tastic. But that was all before the boys showed up.

They filed off their bus, messy-haired and slouchy. Every single one of them wore regular old shorts or jeans and ratty T-shirts.

Once inside, they stood in one corner in an unfriendly, lumpy clump. Instead of dancing, they pushed each other around. Rather than eat our food, they threw it at one another. Then they tore down our streamers. Or maybe that happened after their group wrestling match. It’s hard to keep track. At some point, a bunch of them snuck out and threw eggs at our cabins. No one realized it until after they’d left, so we got stuck cleaning up their mess.

Those middle school boys acted like a pack of wild dogs. But I didn’t know it then. And by the time I figured it out, it was almost too late.

chapter one
a slobbery surprise

S
ummer was officially over. There would be no more swimming, snorkeling, or bodysurfing in the cool blue waves. No more relay races, and no more circling the campfire to sing songs and toast marshmallows.

For eight whole weeks, the world of school and homework and chores had been replaced with nonstop fun. Sometimes at camp, I smiled so much that by the end of the day my face hurt. But I wasn’t smiling now. Our ferryboat from Catalina Island had landed, the parking lot was already crowded with parents, and I just spotted my mom.

“I can’t believe this is it,” Mia said as we filed off the boat. Her voice sounded strained and her eyes filled with tears. Mia cried last summer when we were only saying good-bye to camp, not good-bye for real.

I’m the one who should have been crying. While I was away at camp, my mom moved in with her boyfriend, Ted. That meant I moved, too.

Sometimes Sophia is a little bossy, but Mia and I were used to it. The three of us had been best friends since kindergarten.

I hugged Sophia and said, “I’ll miss you.”

“Call me when you get there.”

“Sure thing,” I promised, since it’s never a good idea to argue with Sophia.

“As soon as you walk inside.”

Next, I hugged Mia, who smelled like bug spray. “Call me right after,” she said. “And good luck with Dweeble.”

Dweeble is my secret name for Ted. It’s only fitting, since his last name is Weeble, and he’s the dweebiest guy I know. Example? The first time I met Ted he had a giant spaghetti sauce stain on his shirt. He and my mom had gone out for Italian food, and I guess he spilled. So basically, my mom just moved in with a man who needs to eat with a bib.

They’ve been together for over a year, but at least they’re not getting married—yet. They want to try living together first, to see how it goes. I can tell them right now that it’s not going well. Not for me, anyway.

“See you later.” I waved back, but it didn’t seem right. I said the same thing last summer, when we all knew we’d see each other less than a week later in school. But those days were over now.

When I reached my mom, she bent down and squeezed me tight. “Welcome home, Annabelle.”

Her curly blond hair smelled like coconut shampoo. I didn’t let go right away because despite it all, I’d missed her, too.

Still, we didn’t linger in the parking lot. Mom wanted to get home and I didn’t want to start crying. So I said fast good-byes to my counselor, Jane, and to the rest of the girls from my cabin. Then we found my two overstuffed duffel bags and hauled them over to Mom’s car.

“Wait until you see the new house. You’ll love it,” Mom said as we loaded my things into the trunk.

I watched Mia and Sophia head over to Mia’s dad’s car, at the other end of the parking lot. Their matching dark braids reminded me of the thick rope we used to tie the kayaks to the camp dock.

My hair is blond and straight and too thin to hold a braid. It hardly stays in a ponytail.

I nodded. “I already saw the new house.” Did she forget that she and Ted took me there the week before I left for camp?

“Yes, but now all of our stuff is in it, so it looks even better.”

“Mine and your stuff? Or yours and Ted’s?”

“All of our stuff,” she replied, like it was that simple. “Although there’s still plenty of unpacking to do.”

Mom pretended like she didn’t hear. She keeps trying to convince me that the move isn’t a big deal. And for her, it’s not. The new house is in Westlake, almost thirty miles away from our old apartment. She still gets to have her same job, teaching tenth grade English at North Hollywood High School. Plus, she can drive anywhere she wants. I’m only eleven, and my bicycle is so rusty it squeaks whenever I pedal.

I slouched down in my seat and looked out the window.

“Are those new shorts?” my mom asked.

I fingered the frayed edge of the cutoffs. “Mia let me borrow them because all my stuff was dirty.”

I shrugged. “She probably just felt sorry for me.”

No comment from my mom, not that I was surprised.

We had a fight about cutoffs before I left for camp. I’m not allowed to make my jeans into shorts. Mom says it’s a waste of fabric. If I want shorts, she’ll buy me shorts. But if she’s going to spend money on jeans, they have to stay jeans.

Now she sighed and said, “Oh, Annabelle. Try and have a good attitude about this. Think of it as a big adventure. You get to go to a new school.”

“And we get to live in a house. That’s much better than an apartment. Wait until you see the tomato plants I put in the backyard. Soon we’ll have fresh vegetables growing in our very own garden. Can you believe it?”

“Tomatoes are a fruit.”

I leaned forward and turned on the radio, but Mom kept talking.

“I know you liked St. Catherine’s, but this really is for the best.”

When I didn’t say anything, Mom finally got the hint and stopped talking.

An hour later, we were in the new neighborhood. Too soon, we turned onto Clemson Court, our new street. It’s called a cul-de-sac, which is a fancy word for dead end. All the houses around here looked the same. Each had two stories, a redbrick chimney attached to one side, and a square patch of grass out front. There were no stores or gas stations or cool places to walk to—just house after house after identical house.

“Get ready for a surprise,” my mom said as we got closer.

Her voice was singsongy, like she had a secret she couldn’t wait to tell me. But my mom can’t keep secrets, and I’m never surprised. Not on my birthday or even at Christmas. I always know what I’m getting. All I had to do was wait and she’d spill the beans.

Of course, today I didn’t even have to wait. I’d already figured out what she got me—a basketball hoop. Two houses on our new street already had hoops above their garages. When I’d first noticed, I asked my mom if I could get one, too. She’d said, “We’ll see,” in this happy way that made me think she definitely planned on buying me one.

Even though I had to leave my friends behind, a small part of me—maybe the size of my pinky toe— was excited about having my own driveway where I could shoot hoops. We didn’t have our own driveway at the old apartment, just a parking space in a dark underground lot. Sometimes I took my ball to the park, but usually the courts there were filled with guys from the high school—the kind of guys who liked to swear and spit. No way would I ever ask them to share a court.