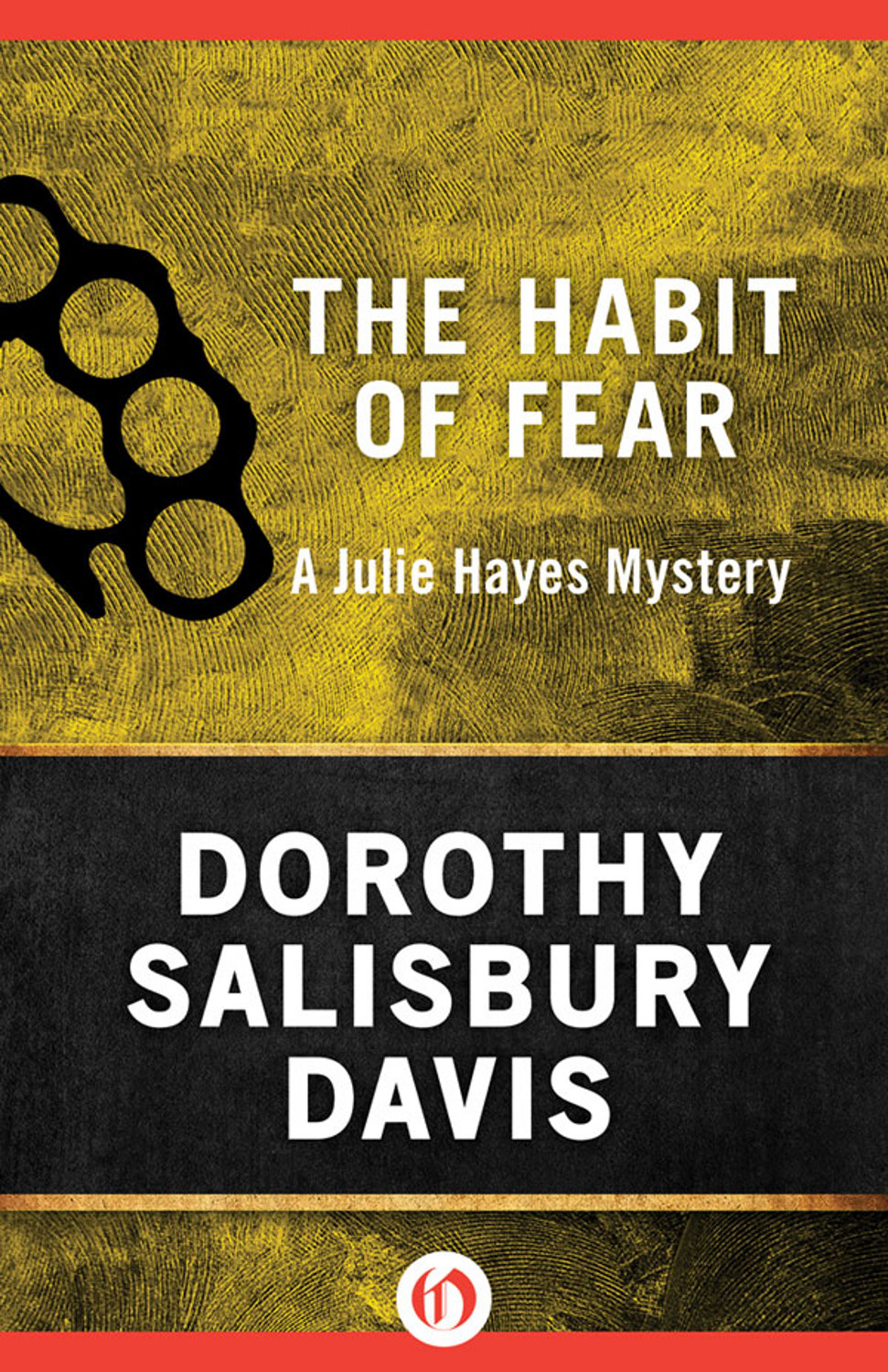 PRAISE FOR THE WRITING OF DOROTHY SALISBURY DAVIS

“Dashiell Hammett, Raymond Chandler and Josephine Tey … Dorothy Salisbury Davis belongs in the same company. She writes with great insight into the psychological motivations of all her characters.” —
The Denver Post

“Dorothy Salisbury Davis may very well be the best mystery novelist around.” —
The Miami Herald

“Davis has few equals in setting up a puzzle, complete with misdirection and surprises.” —
The New York Times Book Review

“Davis is one of the truly distinguished writers in the medium; what may be more important, she is one of the few who can build suspense to a sonic peak.” —Dorothy B. Hughes,
Los Angeles Times

“A joyous and unqualified success.” —
The New York Times
on
Death of an Old Sinner

“An intelligent, well-written thriller.” —
Daily Mirror
(London) on
Death of an Old Sinner

“At once gentle and suspenseful, warmly humorous and tensely perplexing.” —
The New York Times
on
A Gentleman Called

“An excellent, well-controlled piece of work.” —
The New Yorker
on
The Judas Cat

“A book to be long remembered.” —
St. Louis Post-Dispatch
on
A Town of Masks

“Mrs. Davis has belied the old publishing saying that an author’s second novel is usually less good than the first. Since her first ranked among last year’s best, what more need be said?” —
The New York Times
on
The Clay Hand

“Ingeniously plotted … A story of a young woman discovering what is real in life and in herself.” —
The New York Times
on
A Death in the Life

“Davis brings together all the elements needed for a good suspense story to make this, her fourth Julie Hayes, her best.” —
Library Journal
on
The Habit of Fear

“Mrs. Davis is one of the admired writers of American mystery fiction, and
Shock Wave
is up to her best. She has a cultured style, handles dialogue with a sure ear, and understands people better than most of her colleagues.” —
The New York Times Book Review
on
Shock Wave

for Christianna and Roland, who shared a part of the journey

Her husband frowned and screwed up his eyes as though searching his mind for another, no more unkindly way to explain something that ought to have been accepted without explanation. Explanations were not going to help.

If only she could do that, Julie thought, if only she could say, “Okay,” and get up and walk out of the room. What she said was, “Why don’t you start from the beginning? I want to be sure I heard what I think I heard.”

“You heard what you heard,” Jeff said: a gentle voice, a message of stone. When Julie shivered in spite of herself, he put out his hand to her. She pulled away, and he turned the gesture into one of flicking dust from the arm of the chair. Despite all her housecleaning, a tiny cloud of dust rose and shimmered in the beam of early summer sunlight that angled across the living room.

“I’ll bet there’s no dust in her house,” Julie said. “Or is she a slob? Am I too fastidious? Too much like you?” She didn’t want to say the things she was saying. They simply spurted out. To forestall any more of them she pressed her knuckles against her mouth.

“You must have known,” Jeff said, his sad eyes coaxing her to agree with him.

“Something. You must have known something.”

“No. It’s not your fault. We don’t communicate very well. We don’t pick up on one another. You want me to explain, but how can I explain the inexplicable? I’ve fallen in love. I didn’t plan to, but it happened.”

“And what am I to do?” More words to regret. And underneath the pain and panic was the feeling that she had never been in love with him. Lacking in variety of experience she might be, but she knew there was more to loving than occurred between them. And yet there had been love.

“I don’t intend to leave you destitute.”

“I’m not talking about money,” she screamed, and then in self-disgust, “Oh, why can’t I shut up? Christ! Words don’t mean anything. Not to a child, and that’s what’s wrong with me. I’m retarded. I refused to grow after hitting twelve.” She got to her feet and stretched until her bones crackled, trying to break the tension. “Maybe we’re onto a cure now. How about that?” She moved from place to place in this sacred room of his, this so-called living room in which she had not been able to live in all the nine years of their marriage. She was looking for a single object she had added to his exquisite collection of Victoriana, a china giraffe.

“I consider myself at fault there,” he said. “I liked you that way.”

Would it have choked him to say that he had
loved
her that way? Having found the ornament and taken it in hand, she forgot her purpose, if any, in looking for it, and put it back on the shelf. “You’re not at fault, I’m not at fault, my mother wasn’t at fault …”

“Phyllis wasn’t at fault either, was she?” Julie ranted on with the pointless mention of Jeff’s first wife. “What you want is a no-fault divorce. Right?”

“Since you put it that way, yes. I suppose that is what I want. I want to be fair to you, certainly.”

“I mean by that that I shall always provide for and take care of you.”

“Always?” Julie whirled around on him. “I can’t believe what I’m hearing, what we’re saying to one another.”

“I know,” he said soothingly.

“Let me say something to you, chum. Before I let you take care of me, I’ll find a jumping-off place and celebrate my independence.”

“If that’s to be construed as a suicide threat, it’s not allowed.”

“It’s not a suicide threat! It’s a survival plan.”

“Then I’ll be the first to celebrate your independence. I’m sorry, but you set yourself up for that. I think it’s demonstrable that self-support with you is a recent and tenuous accomplishment. Look at matters squarely, Julie. You finally have a paying job, a column under your own byline …”

“Half a column,” Julie said of “Our Beat,” the
New York Daily
column she coauthored with Tim Noble. She sat down, but on the edge of the chair, the easier to be off again if sitting became unbearable.

“Would you like it any better if it were all yours?”

She gave an angry shrug and said nothing. It was mad, unreal, discussing her so-called career at this moment.

“Is that why you’re divorcing me? How old is the new one? Getting on toward puberty?”

“I’m not either. And you don’t have the right to lecture me.”

“So why? … Strike that. I know why. You love her—differently.”

“We’re very good together,” he said, not looking at her.

That hurt deeply, a scalding splash of pain. But she managed, “And at your age you don’t have that much time.”

“Touché.” A little twitch of nostrils showed the bristling: she had wounded his pride.

Julie sat up straight, feeling starched and stretched. “Why should I make it easy for you?”

“It’s not easy for me. The whole thing is a torment. Easy? Half the time I feel like an idiot, this happening to me. I dream of castration. I dream I’m impotent and it’s a relief.”

“And the other half of the time?”

“When I’m with her …” Jeff started slowly.

“So,” he said, cat-cradling his fingers.

Why marriage? she wondered then. If that was his intention. And otherwise, why divorce? Was the woman pregnant? After two childless marriages, Jeff might like that. There was some faint solace in the idea, but she put it out of her mind when it began to rankle: already she was twisting it into something with which she could reprove herself.

“You’ll want a little time,” he said. “I didn’t think it would be such a shock to you.”

Julie snapped her fingers: a mere bagatelle. That was a phrase of her mother’s she hadn’t thought of for a long time. The pressure of tears she was determined to hold back bore down between her eyes. “A little time for what?”

“It might be helpful for you to see Doctor Callahan again for a few sessions.”

“She could give you some support, that’s all.”

“She’s not that kind of therapist.”

“That’s ridiculous. All psychiatrists are supportive when the patient needs it. But as you say, it is your business. … I thought I might return to Europe and stay for a year this time. Since I have a book contract, I may take a sabbatical from the paper. …”

Her first thought was: in a year the affair could be over. “No! Let’s get on with it here and now. You’ve got a lawyer. I’ll get one. I don’t think they’re in short supply.”

Jeff raised his hands placatingly. “I hoped we could manage a sensible arrangement before bringing in the lawyers. I intend you to have half my worth, do you understand?”

Conscience money. She gave each word a cutting edge: “I’m not sure half your worth, Geoffrey Hayes, is worth having.”

Two patches of color tinged his cheeks. “You are probably right.” He looked at his watch—as though it mattered that it was half past ten of a Sunday morning in June. “Would you like me to move to the club?”

“It’s something I haven’t given much thought to, Jeff.”

“No. Of course not.” All softness again. “I’m very, very sorry. I know I’ve hurt you, but I think in time I’d hurt you more if I didn’t take this step now.”

“Oh, shit.” A glorious flood of anger finally released whatever clogged the tears. On her feet she said, “No, I don’t want you to move to the club. This house is so much yours it can’t wait for me to get out. And I want to be the one to go. It isn’t as though I haven’t a place of my own to go to. …”

“Julie, you’re not in a fit state to go anywhere,” he called after her as she started from the room. “Come back and let’s talk sensibly. I can make some coffee.”

And drink it, she thought. To hell with him and Queen Victoria and whatever little flick was waiting to share his sabbatical. Running, half-blind with tears, she bumped against the pedestal and tumbled a marble bust of a woman masked in nineteenth-century gentility. She broke the fall of the sculpture with her leg, but left it where it landed, intact. She hauled the heavy sliding door closed behind her. It was still closed a few minutes later when she went out of the house.