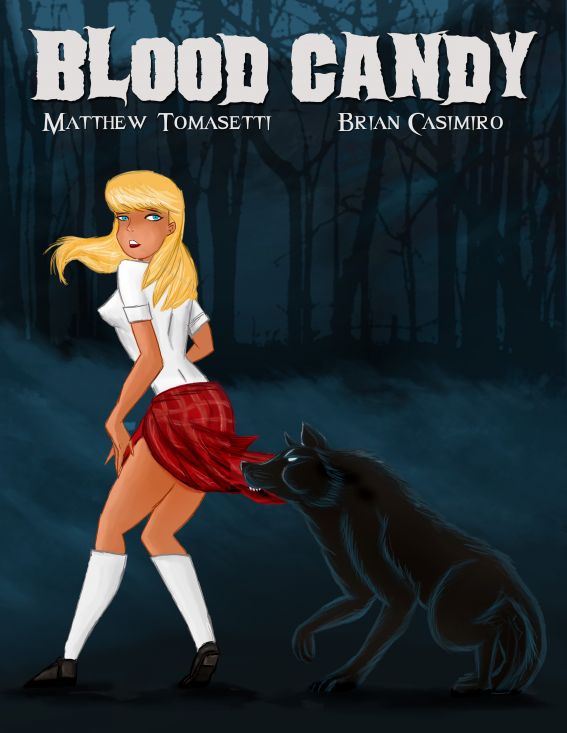 This is a work of fiction. The characters and
events portrayed in this book are fictitious. Any similarity to
real persons, living or dead, is coincidental and not intended by
the authors.

No part of this book may be transmitted in any
form or by any means, electronic or mechanical, including
photocopying, recording, or by any information storage and
retrieval system, without permission in writing from the authors,
except for the case of brief quotations embodied in
reviews.

Candy Shuler fidgeted with her little red dress
to make sure it adequately revealed the proper amount of cleavage.
Should everything go according to plan, the doorman inside the bar
wouldn’t scrutinize her fake ID if he was too busy concentrating on
her proportions instead. She had already struck out with the
gatekeepers of alcoholic misadventures twice tonight, and she was
determined to make the third time a charm.

The doorman eyed her as soon as she walked in
through the door. His arms bulged against a shirt that was far too
small on him, showing off all of
his
proportions. Judging by
the unwavering expression on his face, he wasn’t the type to be
taken for a fool. Candy decided to put faith in the blue-eyed
appeal men couldn’t resist and stepped up to the
gatekeeper.

“Identification,” he said in a somber
voice.

Candy made sure to squeeze her goods together
when she leaned down to dig around in her handbag. One of the
doorman’s brows perked up and when he took her ID he barely glanced
at it. That was good, because she only marginally resembled the
woman in the photograph.

The gatekeeper gave Candy a pleasant smile and
indicated with a nod of his head for her to go on in. Easy as pie,
she thought to herself. Now to find an easy target with an open
wallet. It was already one in the morning and the night wasn’t
getting any younger.

It didn’t take long to see the place was
nearly dead, which meant she might end up spending more of her own
money than she’d like. There were only two people sitting at the
bar, one of them a middle aged man with a short growth of graying
beard hunched over a pint. Since Candy smelled him halfway across
the room, she decided to try her luck with option number two
instead. He was one of those guys who thought he was a badass
biker. He was also old enough to be her father, but she had stooped
as low to get free drinks before. Most “bikers” were posers anyway,
even the older ones.

Candy plopped her handbag on the counter next
to him and then tossed her blonde hair to grab his attention. When
he turned his beady eyes to her, she got a good look at all of the
atrocious gear he was wearing; a typical jacket covered in patches
along with frayed jeans tucked into leather boots. He was even
wearing a blue dew rag. What a tool.

The biker grinned, revealing a gum line devoid
of far too many teeth. The lack of incisors combined with his
crooked nose suggested he had been on the losing end of a few
fights. He called for the bartender to bring another round of beer.
Apparently, he didn’t care for small talk or
introductions.

“What’s your name?” Candy asked
him.

The toothless man took a swig of beer and then
said in a rusty voice, “Stanley.”

The biker’s expression went lifeless. Candy
wasn’t sure why, but when the bartender set two beers on the
counter, Stanley snagged them both with one hand and then walked
away. She was left wondering why she bothered in the first
place.

The best way Candy had found to celebrate
freedom after four long years of oppressive private school was in a
state of inebriated bliss. This also had the wonderful side effect
of making home life more sufferable. In small-town Massachusetts,
that meant a night out trying to sneak into an establishment that
carded up front. So far tonight, nothing was panning
out.

Candy never thought she’d end up missing
school this much. Not that school had been difficult for the girl
with blonde hair, blue eyes, and a smoking hot body. Those
attributes alone guaranteed her scholarly success. All it took was
some well placed flirting, while female teachers were easily
endeared with the Catholic good-girl image she had been raised to
uphold.

For girls like Candy, school had always been
something tolerated more than enjoyed. But she missed her friends.
She missed the cute guys who had all of their teeth. Most of all,
she missed the time away from her mother who lived out here in the
middle of nowhere.

The bartender put another pint in front of the
guy at the other end of the bar and then headed her way. “Can I get
you something?” he asked her.

Candy glanced at the man with the scruffy
beard at the opposite end of the bar. The smell more than the sight
of him was enough to have her call it a night. “Surprise me,” she
told the bartender. “Make whatever it is a double.”

The bartender went to work on her drink. He
was fairly cute, but bartenders were in the business of making tips
and Candy found them extremely resilient to advances that would
lead to free drinks. She was considering the possibilities when
someone took the seat next to her and spoke in a grating British
accent that had her cringing.

When Candy turned, she had to do a double
take. At first she glimpsed one of the biggest dorks she had ever
seen wearing a white silk shirt straight out of the ancient and
best forgotten era of the seventies, buttoned only halfway up to
reveal a chest nearly as white. And then upon second glance, she
saw the sexiest man she had ever laid eyes on. The warning centers
in her brain cautioned that only date rapists dress this badly, but
the synapses fired off uselessly, leaving her unable to see
anything beyond his charming smile.

For some inexplicable reason, Candy found his
goofy accent fascinating. She had the urge to laugh at him, at
least in her mind, but she couldn’t say anything at all. When he
smiled, a flash of exhilaration jumbled her thoughts.

“Candy,” she managed to whisper.

“Delightful,” he said with a wink. “I like to
put candy in my mouth.”

Candy flushed, throwing common sense and
conventional wisdom at such a terrible line right out the window.
She hardly noticed the drink the bartender put in front of her.
Rupert, with his perfectly mussed brown hair was, without a doubt,
the most gorgeous man she had ever seen. He slid the drink closer.
Candy fumbled for it, not wanting to take her eyes away from him.
Then she downed it in a few throat-burning gulps. Rupert called for
another.

“Come here often?” he said. The cadence of his
terrible accent was simultaneously arousing and
repulsive.

“I’m certain I’d remember an angel like you.
Why don’t I take you back to Heaven after we finish
here?”

Somewhere within the cobwebs of her mind, her
subconscious laughed at one of the worst lines it had ever heard.
She found herself saying, “That would be awesome.”

Out of nowhere, the stale smell of body odor
made Candy reel. The older man from the other end of the bar stood
behind Rupert with an ill-favored look about him. He smelled so
badly, she had to physically cover her mouth and nose to keep from
retching.

“I think you should find another mark,” the
hobo said. “This one’s a little young.”

Rupert only afforded the stranger a slight
glance. “Piss off, wanker.”

“Can’t do that.” The older man turned grim and
weathered eyes to Candy. “Let me get you a cab, young lady. You
don’t belong here.”

Candy glanced at the smelly man, and then to
the hand Rupert had extended out for her. When she took Rupert’s
hand, the hobo growled and moved as if he meant to split them
apart.

“Leave us alone,” Candy told him. “What’s
wrong with you?”

“You heard the lady,” Rupert said. “Piss off
before I put my foot up your arse.”

Rupert led her outside, even though her mind
was screaming at her to stay in the bar. With his thick arms
crossed over his chest, the doorman didn’t seem to notice their
passing. Candy sort of wished he had. Didn’t he care that she was
leaving with this loser?

Once they were outside, Candy had the freedom
to let go of her nose and allow the fresh summer air to wash away
the hobo’s scent. It also had her wondering why she was out there
in the first place. A glance at Rupert reminded her.

“What a smelly old freak,” she
said.

He led her across the parking lot towards a
stand of trees where it was quieter, and also where the glow from a
single streetlight didn’t penetrate into the dark brush. He glanced
over his shoulder before stepping down into the grass. Candy was in
heels, and aside from instincts telling her not to go down there,
she couldn’t have managed the slight incline on her own. Rupert
helped her along, intent with taking her on a stroll that
way.

“My car is over there,” Candy felt obliged to
say.

Rupert either didn’t hear what she said or
didn’t care. He led her further into the trees. Candy didn’t really
mind now that she thought about it. With both of her hands in his,
she became vaguely aware of how odd his skin felt, as if he had
been out in the cold too long; and how smooth, as if he had never
put in a single day of labor in his life. It felt nice, a peculiar
contrast to what she had always been used to.

“You ever done it in the woods?” he asked her.
“In the tall grass or against a tree with the moon high
above?”

Born to a highly religious mother whose ideals
she could never escape, Candy had never done anything of the sort.
She had to admit it sounded nice, like what she had secretly
desired for a long time.

She was lost in his eyes again. Her instincts
and her mother’s ideals screamed no, but after peering into those
eyes she said yes.

Rupert pressed her against a tree. How nice
the probing tongue felt in her mouth; a long, caressing kiss done
with expert care and so unlike that of the inexperienced schoolboys
she had dated. Everything else became vague against the darkness as
he wrapped her in the kiss, his mouth tasting pleasantly of
mint.

“I promise this will be the best night of your
life,” Rupert said, his tongue now in her ear.

I'm Supposed to Protect You from All This by Nadja Spiegelman
The Gate to Everything (Once Upon a Dare Book 1) by Ava Miles
If I Should Die by Allison Brennan
The Matrimony Plan by Christine Johnson
Thunder On the Sea: A Tim Phillips novel (War at Sea Book 11) by Richard Testrake
By Design by Jayne Denker
On the Run by John D. MacDonald
Visiones Peligrosas III by Harlan Ellison
Italian Shoes by Henning Mankell
A Flirtatious Rendezvous: The Gentlemen Next Door #4 - Historical Regency Romance Novellas by Cecilia Gray