The next book in the Stonebrood Saga

Other books by Tracy Cooper-Posey 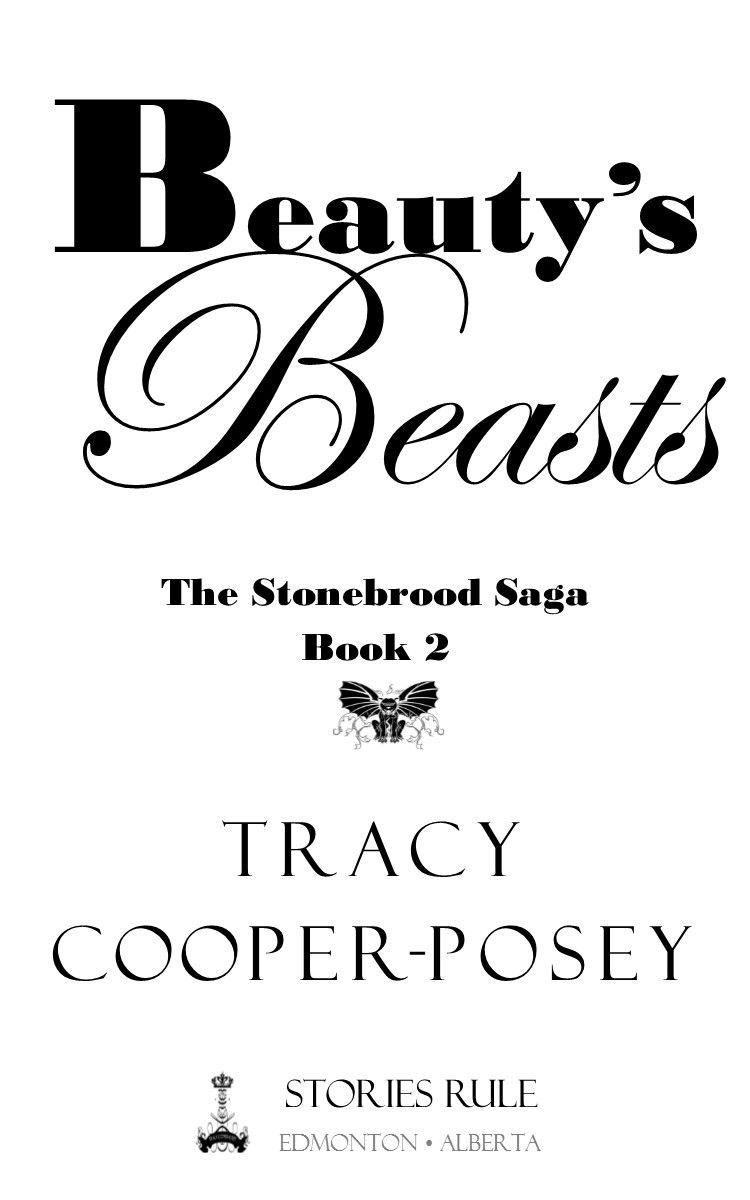 Family history can be fatal.
Riley Carson Connors is yanked out of Pittsburgh and coaxed to New York by two tall, sexy strangers. Nicholas Sherwood and Damian are the only people in the world who know anything about her parents, and what they know is terrifying. She must face a powerful enemy who killed both her parents, who were the best demon hunters of their era.
But while the truth about Riley’s family history is a powerful magnet, Damian and Nicholas prove to be even more compelling. Former lovers and brought together only because they gave their word to her mother to protect Riley, the two powerful vampires play erotic mind games with her. Each has a hidden sexual agenda that Riley can’t begin to guess, but seems to involve driving her out of her mind with the sort of pleasure only a centuries-old lover would know how to give.
Warning: This story features two super hot alpha vampire heroes, multiple sex scenes, including anal sex, MM sexual play, MMF sex and the use of sex toys. Do not read this book if frank sexual language and sex scenes offend you.
No vampires or demon hunters came to harm in the making of this book. Gargoyles have been added to the official hunt list, however…
This is the second book in The Stonebrood Saga.
Book 1.0:
Carson’s Night
Book 2.0:
Beauty’s Beasts
Book 2.1:
Harvest of Holidays*
Book 3.0:
Sabrina’s Clan
[*
A Stony Stories tale: Short stories featuring the characters and situations from the Stonebrood Saga
]

Much later Riley wondered if anyone but she had ever greeted the moment that changed their life forever with intense irritation but at the time, she didn’t recognize her moment for what it was.

Sabrina tapped on Riley’s open bedroom door with her knuckles, down low, like she’d done a hundred times before. “Guy at the door for ya.”

Riley dropped her pen on her notepad and sat back, stretching the small of her back with her hands planted on her hips. “God, not now,” she begged. Unfortunately, guys rocking up unannounced at their apartment door asking for her was a way of life. Everyone in the apartment had developed a routine for dealing with men following Riley. Even new women—they couldn’t risk guys as roommates—only took a week to adapt to the reality.

Riley pushed her bottom lip out and opened her eyes wide, staring at Sabrina. “Please?” she begged. “I’ve got an exam tomorrow.”

Sabrina’s pretty Latina features, so unlike Riley’s—so
exotic—
creased into a smile. “I’d take this one.”

Riley hung her head for a moment. “Are you
ever
going to get it through your head that I have no interest in finding the perfect guy, Sabrina?”

Riley stood up. “We’ve talked about this, remember? Men are all
stoopid
.” She pushed her hands through her hair automatically and smoothed it down. “How do I look?”

Sabrina grinned. “Like Vivian fucking Leigh with green eyes and I hate your guts.” She stepped away from the door. “Want me to come with you and run interference so you can toss the bastard after thirty seconds?”

Riley looked back at her desk and sighed. “You’d better,” she said. “I really do have to study.”

Sabrina snorted. “You’ve got an IQ of one fifty-two and you’re pulling in better than ninety percent on everything. What the hell are you worried about?”

Riley bit her lip as she headed for the front door where her mystery guest was waiting. Sabrina wouldn’t understand a concept that Riley was only just starting to formulate herself, so she didn’t answer. She wasn’t sure she could put it into words yet, anyway, but lately she had begun to wonder if this was all that life was really about.

The business degree she was so close to finally getting after years of struggle and crappy part-time jobs, mountainous student debt she was going to spend even more years paying off just to earn the degree in the first place, a career she would earn with that degree, just to work even harder in the trenches to earn a corner office, where she would work even
harder
to hold her tenuous position while younger, up-and-coming turks would try to climb up her back…was this really what she had spent years working her butt off for? She had worked so hard for so long that now the goal was rolling into view, she was finally lifting her head up and looking at it and going…
eeeewww!

Riley had laid awake nights trying to remember why she had got into this gig in the first place and kept coming up empty on an answer. That was the scary part. Had she wasted five years of her life on a quest for a piece of paper that would push her into a position she didn’t want in the first place?

All the soul-searching had made study harder and exams a genuine struggle. It was difficult to score in the high nineties when a voice in the back of your mind was constantly whispering “
why bother?”

Sabrina trailed after her into the main room as Riley opened the door Sabrina had closed on her visitor.

The guy turned his head to look as the door swung open, alerted. He’d been standing patiently in the corridor, hands shoved in his coat pockets. Her first impression of him was height. He was easily over six feet. It was still early spring and Pittsburgh could be miserable in April, so the light-weight charcoal coat he was wearing hid details and emphasized his shoulders.

Riley was used to rapidly scanning and sizing up a guy in one sweep. She’d learned at an early age that most of their clothing and possessions said things about men that their mouths and words and hands didn’t, and that the only way to protect herself was to read the clothing. Riley did it now.

He was wearing patent leather shoes, expensive ones. There was barely any slush on them, which meant he hadn’t walked far. That said he’d either used a cab, or his own car. He didn’t look like a cab kind of guy, not with the rest of the clothing added in. The trousers were dark—too hard to tell in this light exactly what sort of material but she bet they weren’t chain store, not over the top of those shoes. The shirt, what she could see of it from between the coat, was a good quality collarless button-up shirt, but it was creased around the middle from long sitting.

His hair looked like it was intended to be short, but he’d not got around to getting it trimmed for a few weeks. It was shaggy and agreeably rumpled in a way that made Riley want to push her hand through it. Black hair. European black with very European white skin. If she had to give him an age, she’d say mid to late thirties, but she would be guessing wildly.

Not a businessman. Not an official of any sort. Not a student. Plus, he had been sitting a long time.

She put it together. Car. Long sitting. Travel. “You’ve come a long way to see me,” she told him, and looked up at his face.

He was staring at her and for a second, she wondered if he’d even heard her. He had eyes the same sort of blue as they put on maps for oceans. Depthless. She let him stare and lifted her brow. “Hi,” she coaxed. “You came to see me.”

He blinked and refocused. “You look so much like your mother.”

Riley reached out to Sabrina for help, to steady herself as her legs abruptly weakened. There was a roaring sound in her head. Dizziness swept over her.

But it wasn’t Sabrina who helped her. The man was suddenly
there
. She sagged as he lifted her up like one does a child, with both hands under her arms, and deposited her in the one comfortable armchair in the room. Riley clutched at her arms, cold and shivering, staring at him as he stood back.

“Jesus fucking Christ, who are you?” Sabrina demanded, stepping between him and Riley.

“I am an old friend of Riley’s parents. Have no fear. Do you have any soda? She needs sugar to combat the shock.”

Sabrina glanced at Riley. She licked her lips, indecision plain on her face.

Sabrina pursed her lips and headed for the kitchen.

Riley looked at him. “Who are you?”

“A friend.” He stripped his coat and tossed it over the back of her chair, moving quickly as if his time was limited. He pulled the old vinyl kitchen chair up close and sat in it. Beneath the coat, the shirt cuffs had been folded up and shoved back almost to his elbows, revealing strong wrists and forearms. He reached into his pants pocket and pulled out a pocket watch and looked at the time.

Riley’s mental jaw dropped open, although she managed to keep her face smooth and polite.
A pocket watch
.

“I hope you don’t mind, but I’ve asked another friend to meet me here,” he said. “Someone who also knew your parents.”

Sabrina hurried back into the room, a soda can in her hand. She thrust it at the man. He handed it to Riley. “Drink it all,” he told her. “The sugar will restore you.”

She grimaced, but popped the lid and began to drink.

The man looked at Sabrina. “I would ask you to leave us. I need to speak to Riley alone.”

Sabrina crossed her arms and shook her head. “Nuh-uh. You think we’re stupid, mister? We have no fucking idea who you are.”

He rolled his eyes. “You just left me alone with her to get the soda. I didn’t kill her then. I’m just asking you to step out of the room, not the apartment. Riley can scream for you if I so much as cross my eyes at her inappropriately.”

“Fuck you, mister, I ain’t movin’.” Sabrina cocked her hip with a
make me
attitude.

The man sat back. “If you don’t leave, I can’t tell Riley about her parents.”

“I’ll risk it,” Riley said. She stared at Sabrina, hoping that the stare would remind Sabrina that she wasn’t completely helpless. After so many years of fighting off besotted men, she’d learned a trick or two.

Sabrina took a deep breath. “Well…” she said reluctantly. “If you’re sure.”

“I’ll screech my head off if I need you,” Riley promised.

He looked her in the eye. “I can assure you that Riley is safer with me in the room than anywhere on this little planet of ours at the moment.”

Vegenrage: Dragon Reclaim by Robert Spina
Space Chronicles: Facing the Ultimate Frontier by Tyson, Neil deGrasse, Avis Lang
Living With Syn by A.C. Katt
Catch Me If You Can by Juliette Cosway
The Touch of Bliss — A Sensual Reckoning (Muse of Shadow) by Alba, Caelyn
A Kiss at Midnight by Eloisa James
Tumbling in Time by Wyant, Denise L.
Then Came Indecision (Southern Love #2) by E. L. Todd
Curse of the Shadowmage by Anthony, Mark
Unquenchable Desire by Lynde Lakes