Back Under The Stairs - Book 2 in The Bandworld Series 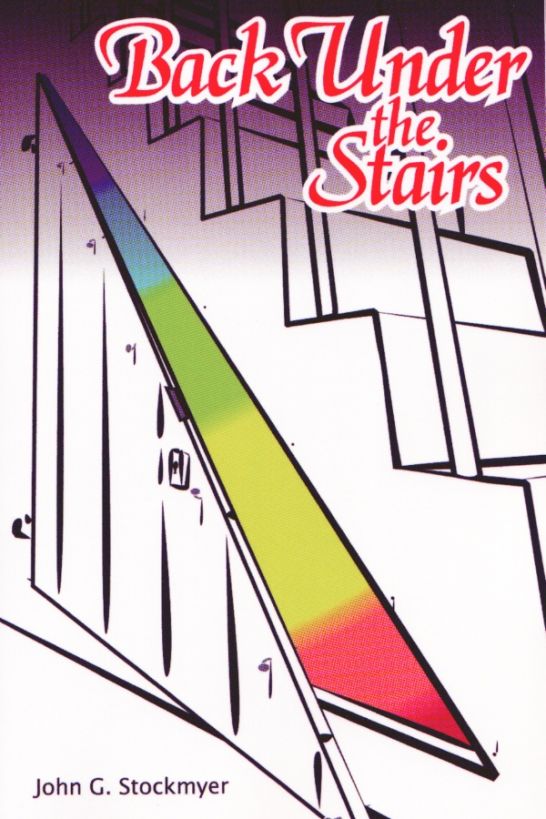 Back Under The Stairs

Book #2 in the Bandworld Series

Thank you for purchasing this ebook. This
book may not be reproduced, copied, or distributed for any other
purpose than the personal reading enjoyment by the purchaser. If
you enjoyed this book, please return to Smashwords.com to discover
other works by this author. All rights reserved by the author.

NOTE:
This is the second of 10+ books
in the Bandworld Series. The first book in the series is free. The
other books in the series can be purchased for $4.99 each at the
author's web site, and from other fine online retailers.

Peter Ziomek is a graphic designer, comic
book artist and instructor in Albuquerque, New Mexico. Peter
received his B.S. in Graphic Design from Eastern New Mexico
University in Portales, New Mexico. He lived in Chicago for 14
years before moving to New Mexico in 1995. He is currently the Vice
President and active creator with the New Mexico self publishers
group 7000 B.C. He uses a combination of digital and traditional
media to create works that range in style from cartoon to
realistic. Influences include two-dimensional patterns, the
original Teenage Mutant Ninja Turtle comics, The Simpson's comics,
Jeff Smith's Bone and brother Paul Ziomek. He is currently
co-creating an all-ages comic book entitled "Fakin' the Funk" with
Paul Ziomek. You can check out Peter's work at:
www.overthetopcomics.com
and
www.7000bc.com
.

John L. Stockmyer is an Associate Professor
of Marketing at Eastern New Mexico University in Portales, New
Mexico. In his spare time, he dabbles in e-commerce, audio-book
production and eBook design. He is also an avid disc golfer. His
current ambition is to help talented "undiscovered" authors (like
his dad) find an audience through the use of non-traditional media
and innovative technology.

To express our thanks for purchasing Book #2
in the series, we would like to send you the book of your choice
from the John G. Stockmyer collection for free! No strings
attached. (1 free book per customer)

Just send an e-mail to
[email protected], and include the following information:

3) Where you purchased this book (Smashwords,
iBookstore, etc.)

4) Which free book you want

NOTE: the .mobi format is used exclusively by
the Amazon Kindle.

Why do we want this information? Very simply,
to know who our readers are. When you purchase our books from major
retailers, they do not disclose any buyer information to us. As a
small (family-run) business, we try to get to know our readers, and
believe in providing personal service. We will NEVER disclose your
personal information to anyone for any reason. Thank you very
much!

Leet, First Head, nodded to his Second, his
earnest young officer forming up the thin line of Malachite
troopers across the back wall of the castle's main room. Counting
every beat of his laboring heart, Leet knew it had only been
minutes since his cadre of forty had stormed across the heavy
timbered drawbridge to seize Hero Castle.

They were all sweating: the soldiers in their
green tunics, swords buckled at their sides; the detail's two
officers in their longer tabards. Had Pfnaravin been present to
defend the castle with Mage-magic, they would now be dead.

It was to run this risk that a cripple like
Leet had been summoned from retirement; that he had been appointed
to command this unit and sent deep into the enemy band of
Stil-de-grain.

Though the torches around the large dining
hall had been set blazing in their ring holders, it was still too
dark to see details. The room's smell was of yesterday's cooking
mixed with moldering stone.

"Two squads to search the castle!" Leet
barked, a dull echo from the harsh stone walls mocking him by
instant repetition. "All occupants down to the lowest slavey to be
brought to me."

"At once, Head soldier!" The young Second
saluted, fist clinched, arm angled across his chest. Forgetting his
infirmity in the danger of the moment, the Head attempted a return
salute with his dead, right arm, finally switching to salute with
his left -- clumsily -- his arm paralleling his green sash of
command.

At that command and with reasonable order,
two units of ten marched off in opposite directions.

The hunt begun, his men out of danger for the
moment, Leet allowed himself the luxury of glancing about the
sonorous room.

Hero Castle. A fabled place. Raised upon the
sacred ground where the Hero of them all had come back from the
mysterious, other world. The place where the great Mage of
Malachite, Pfnaravin, had crossed to that beyond -- then (rumor had
it) recently returned.

Before him in the rectangular room's center
lay the fire stone cooking pit, the wrought iron framework above it
supporting kettles on their s-irons.

On a low platform to his right stood a wood
trestle table, crude benches flanking each of its four sides.

Nervously, Leet glanced up at the high,
clerestory windows. Was relieved to see that the strange, golden
light of Stil-de-grain still streamed through the down-light
apertures. Though he much preferred the green sky of home, at least
the angle of the light assured him there would be time for
questioning the castle slaveys before down-light ended all
communication with these foreigners.

There was a snake sound to his left!

Through the gloom, Leet recognized the
priest, Dockw, the unctuous fraud making that slithering noise by
mincing his elegant, small feet over the rough floor. Twelve lesser
priests -- dressed in robes of white, their bald heads glistening
like newly cracked eggs, cowered by the entrance.

"May I be the first, mighty soldier, to
congratulate you upon your conquest of this noble edifice?" the
priest blathered, Dockw's voice whining across Leet's soul like a
blade of stickl-grass cuts flesh. The sickly perfume of Dockw's
holy unguent clawed at Leet's nose and throat.

"I trust that your bowels flushed
adequately," Leet said, dryly.

"The reason you were forced to stay
behind."

As the weakling's lie continued to spew
forth, Leet smiled grimly to himself. Using the excuse of bloat,
Dockw had disappeared, deserting as Leet's expendables closed on
the castle. Had Pfnaravin's magic withered Leet and his command,
Dockw would have lived to carry home the glad news that an enraged
Pfnaravin was, indeed, in Hero Castle, King Lithoid needing to send
a proper army to capture Malachite's missing Mage.

A spy and therefore dangerous.

At the same time laughable -- the priest's
head plucked clean of hair and brightly painted in the circular
colors of Hyet's sky above: a purple dot on top, banded by blue,
outside of which was the green belt representing Malachite. Lower
still, circled the gold firmament of Stil-de-grain, encompassed by
the orange of Realgar, ringed by the red of mystic Cinnabar at the
level of the priest's plucked brows. Below the bright rings, the
celibate's colorless eyes blinked owlishly behind denuded lids.

At the joining of the priest's fat thighs
swung the sewn-on bag of out-sized, leather testicles, above which,
thrust out and up at a grotesque angle, was the artificial phallus
banded like the priest's bald head. (The heroic size of the stuffed
leather penis in no way compensated for amputated genitals, of
course, "neuterdom" the price one paid for the priesthood!) Hyet's
acolytes must represent the ever impotent but potentially fertile
sky.

Particularly since the sight of this
effeminate grotesquery brought home what Leet, himself, had lost.
First his promising young Second, Bamb -- that fair-skinned,
dark-haired boy. Then Leet's right arm, both wasted in the Great
Mage War.

When noble Cleadon was King of Malachite.

In those distant days, young Leet's cohort of
Malachite defenders had been sent to ward off Azare's blows
directed at the capital. Leet remembered how good it had been to be
alive; the sky of Malachite so green and hot and bright; and honor
to be won.

So Leet had thought.

Then, good King Cleadon had been murdered.
Was succeeded -- in the absence of the true-blood prince -- by the
king's half brother, Lithoid; among dark muttering that Lithoid had
conspired in his brother's death. But only mutterings -- if you
would live!

With the flash of an assassin's knife,
Lithoid had changed allegiance to fight along side the evil
Auro!

The next shock came when Pfnaravin, Mage of
Malachite, fled to Stil-de-grain to organize the opposition's Mages
in a successful attempt to shift the blue sky above Azare toward
the black. So that, more and more, the magic of the Evil Mage-King
faltered.

It was in the final spasm of the war's death
throws that Auro had unleashed his dread berserkers! Men maddened
by confinement in the gathering dark!

Though allegedly on the same side, it was one
of the crazed fighters who, even after receiving Bamb's death
stroke, had beheaded Leet's young guard, the madman thrashing
forward to slash Leet's face and nearly sever Leet's right arm.

A single tear of memory dried unshed in the
dusty eye of Leet grown old.

Marching feet startled the aAmy Head from his
reverie!

Soldiers, herding in the castle slaveys.

"Form them up before me," Leet commanded.

Pushing and pulling, Leet's troops shaped the
slavey men and women into a ragged line.

Cooks, gardeners, scullions, drudges,
turnspits. Belonging less to bands or kings than to their functions
in this ancient pile of stone.

Behind this line of luckless captives, A and
B squads dressed in a single rank, each man watchful. Though
unlikely, it was possible that the lowliest chattel-man might, in
terror, strike out with a hidden knife.

"I am Leet," the Head soldier said, stepping
forward, his body militarily erect. "From the band of Malachite."
Leet paused. "Stil-de-grain crumbles quickly before the attack of
our heroic forces. As proof, even Hero Castle is now forfeit."
Heroic forces? Somehow, the word seemed to fit taller men.
Malachites were strong of limb, of course. Made more powerful by
entering this weakly pulling band of Stil-de-grain. Man for man,
the Stil-de-grainer could never hope to defeat the soldiers of a
powerful pulling band like Malachite!

Thinking of the grizzly Mage, Leet shivered.
Forced himself to assume an icy calm.

"I wish no injury to befall you," Leet
continued, hoping to soothe these frightened menials. "I seek only
the Mage, Pfnaravin. No harm will come to you ...." He let the
pause sink in. "... if you tell me where he is."

Nothing. ... But continued weeping.

Leet advanced two steps, his dead arm aping
the swing of living flesh. "You!" Leet snapped at the elderly man
before him.

Looking up in terror, the lumpish oldster
lowered his eyes quickly, fixing them on his earth encrusted shoes.
Gnarled fingers fumbled with the frayed sides of the man's coarse,
workman's tunic. A gardener, by the look of him.