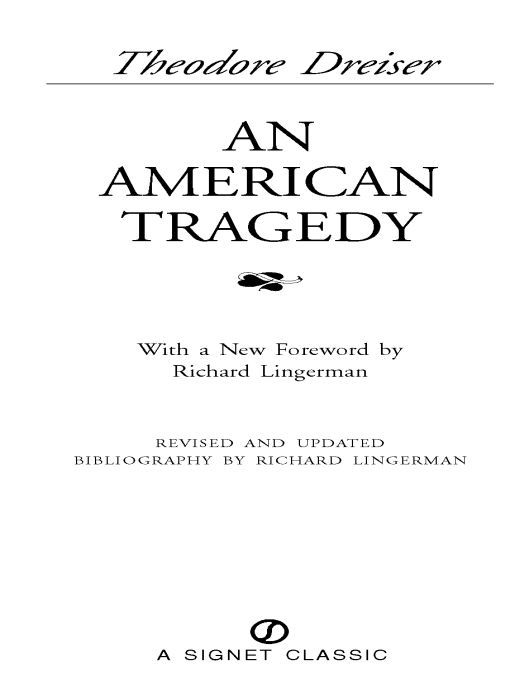 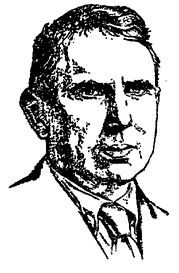 THEODORE DREISER was born in Terre Haute, Indiana, in 1871. He received his early education in public schools and later attended Indiana University. He began his writing career as a newspaperman, working in Chicago, St. Louis, and Pittsburgh. In 1907, he was appointed editor-in-chief to the Butterick Publications in New York City. Meanwhile, his first novel,
Sister Carrie
(1900), had been released by a publisher who thought it objectionable and made little effort to promote its sale; however, some review copies were distributed and the book managed to attract the attention of many prominent writers. With the publication of
The Financier
(1912), a novel based on the life of Charles T. Yerkes, Dreiser was able to give up newspaper work and devote himself to writing.
The “Genius”
(1915), a novel of the egocentric artistic personality, was banned, but a year later a petition protesting this was signed by almost five hundred American writers.
An Amercian Tragedy
(1925), based on an actual criminal case history, brought the author widespread recognition and popularity. It was successfully dramatized by Patrick Kearney. In 1944, Dreiser was awarded the Merit Medal for Fiction by the American Academy of Arts and Letters. He published little during the later years of his life, but
The Bulwark
(1946) and
The Stoic
(1947) appeared posthumously, both showing his later interest in religious philosophy. He died at his home in southern California in 1945. 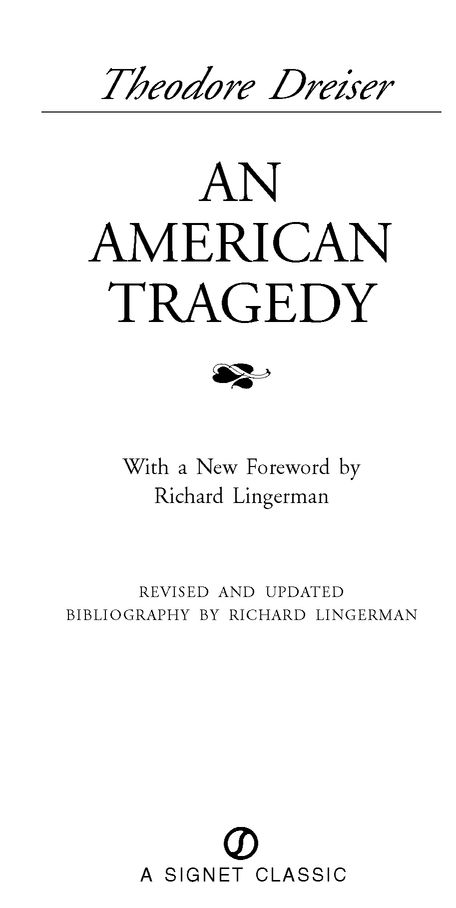 REGISTERED TRADEMARK—MARCA REGISTRADA
Printed in the United States of America
PUBLISHER’S NOTE
This is a work of fiction. Names, characters, places, and incidents are either the product of the author’s imagination or are used fictitiously, and any resemblance to actual persons, living or dead, business establishments, events, or locales is entirely coincidental.
BOOKS ARE AVAILABLE AT QUANTITY DISCOUNTS WHEN USED TO PROMOTE PRODUCTS
OR SERVICES. FOR INFORMATION PLEASE WRITE TO PREMIUM MARKETING DIVISION,
PENGUIN PUTNAM INC., 375 HUDSON STREET, NEW YORK, NEW YORK 10014.
If you purchased this book without a cover you should be aware that this book is stolen property. It was reported as “unsold and destroyed” to the publisher and neither the author nor the publisher has received any payment for this “stripped book.”
Introduction
On September 6, 1920, Theodore Dreiser noted in his diary: “I work on ‘An American Tragedy’ till 4 P.M.” He was living obscurely in Hollywood when he began writing the novel considered to be his greatest and one of the most important American novels of the twentieth century. At 49, he was at a low point in his career. His last novel,
The “Genius,”
had appeared five years ago; it had been banned in New York state as obscene and withdrawn from the market by its publisher. His earlier books were out of print. His short stories were regularly rejected by timid magazine editors fearful that their sexual frankness would offend readers.
Such a charge was nothing new; it had plagued Dreiser’s career since his first novel,
Sister Carrie
, in 1900 was condemned by its unwilling publisher as “immoral.” It was later reissued and this time hailed for its powerful, unrelenting honesty. Younger writers seeking a more truthful kind of writing than the idealistic fiction that dominated the best seller lists rallied behind Dreiser and the banner of Realism. He followed
Carrie
with
Jennie Gerhardt, The Financier
and
The Titan
, which were championed by the younger critics, most vociferously H.L. Mencken, then an obscure Baltimore journalist, who would become America’s most influential literary and social critic of the 1920s.
During World War I, Dreiser and Mencken, both second-generation Americans of German descent, were castigated by super-patriots as pawns of the brutal Hun. Mencken’s political commentary was silenced; Dreiser became persona non grata at many magazines. His mind turned to more alienated characters and psychopatholoy, and he wrote an unproducable play about a child murderer.
Exploring the psychopathogical depths led him to the theories of Sigmund Freud. Dreiser called the Viennese doctor’s ideas “a strong, revealing light thrown on some of the darkest problems that haunted and troubled me and my work.” He sought out Dr. A.A. Brill, Freud’s American translator and a student of the criminal mind. They spent long evenings drinking beer and discussing what made murderers tick. Dreiser was now urgently meditating a novel about a murderer, the germ of
An American Tragedy.
As far back as 1907 he told friends he wanted to “get inside the skin of a murderer.” He made several attempts over the ensuing years to write such a novel, each with a different protagonist, but abandoned all of them because the characters refused to come to life. But the theme continued to obsess him, and he kept searching for a murder case that would serve as a model.
He collected in his researches, he later claimed (with some exaggeration), nearly a dozen examples of what he regarded as a peculiarly American crime. These were emblematic murders, not necessarily typical ones. Dreiser was seeking a kind of murder that served as a metaphor for an illness besetting American society. Such a murder, said Dreiser, involved an ambitious young man who murders a woman with whom he has a relationship and who stands in the way (often she is pregnant by him) of a more advantageous marriage to a rich woman with whom he has fallen in love. Such killers were motivated by the American dream of wealth and success; they were trying to rise to a higher social and economic level and thus, “really doing the kind of thing which Americans . . . would have said was the wise and moral thing for him to do had he not committed a murder,” Dreiser wrote.