A Rite of Swords (Book #7 in the Sorcerer's Ring) 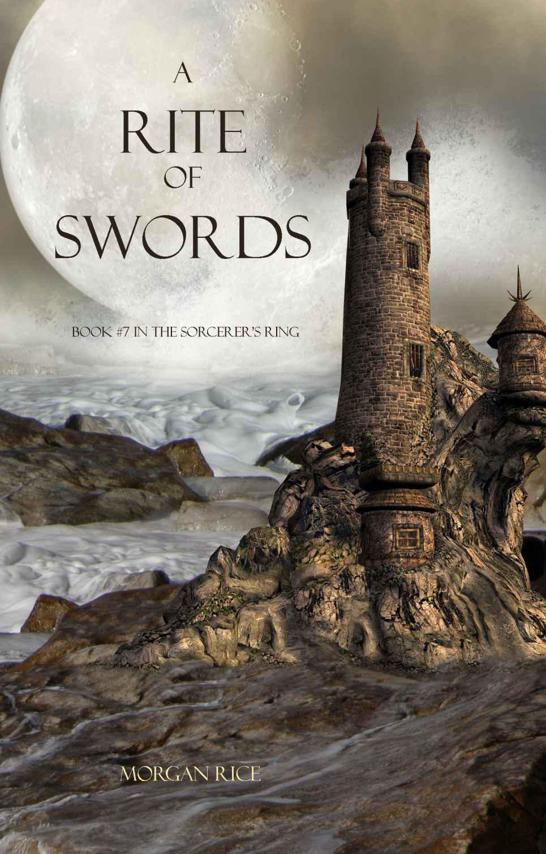 Morgan
Rice is the #1 Bestselling author of THE VAMPIRE JOURNALS, a young adult series
comprising eight books, which has been translated into six languages.

Morgan
is also author of the #1 Bestselling THE VAMPIRE LEGACY, a young adult series
comprising two books and counting.

Morgan
is also author of the #1 Bestselling ARENA ONE and ARENA TWO, the first two
books in THE SURVIVAL TRILOGY, a post-apocalyptic action thriller set in the
future.

Morgan
loves to hear from you, so please feel free to visit
www.morganricebooks.com
to stay in touch.

“Grabbed
my attention from the beginning and did not let go….This story is an amazing
adventure that is fast paced and action packed from the very beginning. There
is not a dull moment to be found.”

“An
ideal story for young readers. Morgan Rice did a good job spinning an
interesting twist…Refreshing and unique, has the classic elements found in many
Young Adult paranormal stories. Easy to read but extremely
fast-paced....Recommended for anyone who likes to read soft paranormal
romances. Rated PG.”

--The
Romance Reviews (regarding
Turned
)

“Jam
packed with action, romance, adventure, and suspense. Get your hands on this
one and fall in love all over again.”

“A
great plot, and this especially was the kind of book you will have trouble
putting down at night. The ending was a cliffhanger that was so spectacular
that you will immediately want to buy the next book, just to see what happens.”

--The
Dallas Examiner {regarding
Loved
}

“Morgan
Rice proves herself again to be an extremely talented storyteller….This would
appeal to a wide range of audiences, including younger fans of the vampire/fantasy
genre. It ended with an unexpected cliffhanger that leaves you shocked.”

--The
Romance Reviews {regarding
Loved
}

All
rights reserved. Except as permitted under the U.S. Copyright Act of 1976, no
part of this publication may be reproduced, distributed or transmitted in any
form or by any means, or stored in a database or retrieval system, without the
prior permission of the author.

This
ebook is licensed for your personal enjoyment only. This ebook may not be
re-sold or given away to other people. If you would like to share this book
with another person, please purchase an additional copy for each recipient. If
you’re reading this book and did not purchase it, or it was not purchased for
your use only, then please return it and purchase your own copy. Thank you for
respecting the hard work of this author.

This
is a work of fiction. Names, characters, businesses, organizations, places,
events, and incidents either are the product of the author’s imagination or are
used fictionally. Any resemblance to actual persons, living or dead, is
entirely coincidental.

“What is it that you would impart to me?

If it be aught toward the general good,

Set honor in one eye and death in the
other,

And I will look on both indifferently,

For let the gods so speed me as I love

The name of honor more than I fear
death.”

Thorgrin
rode on the back of Mycoples as she flew across the sprawling countryside of
the Ring, heading south, somewhere towards Gwendolyn. Thor clutched the Destiny
Sword as he looked down and saw below, sprawled out, the endless expanse of
Andronicus’ million-man army, covering the Ring like a plague of locusts. He
felt the Sword throb in his palm and knew what it was urging him to do. Protect
the Ring. Drive out the invaders. It was almost as if the Sword were commanding
him—and Thor was only too happy to oblige.

But
now was not yet the time for killing. Thor’s first order of business was his
one true love, the woman he had pined for ever since had had left these
borders: Gwendolyn. Thor ached to lay his eyes upon her once again, to hold
her, to know she was alive. Inside his shirt his mother’s ring burned, and he
could hardly wait to offer it to Gwen, to profess his love, to propose. He
wanted her to know that nothing had changed between them, regardless of
whatever had happened to her. He still loved her just as much—even more—and he
needed her to know that.

Mycoples
rumbled gently, and Thor could feel the vibration through her scales. Mycoples,
he sensed, was eager to reach Gwendolyn, too, before anything happened to her.
Mycoples ducked and weaved in and out of clouds, flapping her great wings, and
she seemed content being here, inside the Ring, carrying Thor. Their bond was
only growing stronger, and Thor felt that Mycoples shared his every thought and
wish. It was like riding an extension of himself.

Thor’s
thoughts shifted from Gwendolyn as he flew in and out of the clouds. The former
Queen’s words dominated his thoughts, kept returning to him, as much as Thor
preferred to shut them out. Her revelation had pained him beyond what he could
imagine. Andronicus? His father?

It
couldn’t be. A part of Thor hoped it was just another cruel mind game of the
former Queen, who, after all, had hated him from the start. Perhaps she had
wanted to implant false thoughts in his mind to disturb him, to keep him away
from her daughter, for whatever reason. Thor wanted desperately to believe
that.

But
deep down, as she had spoken the words, they had resonated within Thor’s body
and soul. He knew them to be true. As much as he would like to think otherwise,
the second she had uttered it, he knew that Andronicus was, indeed, his father.

The
thought hung over Thor like a nightmare. He had always hoped and prayed,
somewhere in the back of his mind, that King MacGil was his father and that
somehow Gwen was not truly his daughter, so that they could be together. Thor
had always hoped that the day he learned who his father truly was, all would
make sense in the world, that his destiny would become clear.

To
learn that his father was not a hero was one thing. He could accept that. But
to learn that his father was a monster—the worst of all monsters—the man, more
than anything, who Thor wanted dead—it was too much to process. Thor carried
Andronicus’ bloodline. What did that mean for Thor? Did that mean that he,
Thor, was destined to become a monster, too? Did that mean he had some evil
streak lurking in his veins? Was he destined to become like him? Or was it
possible that he could be different from him, despite their shared blood? Did
destiny travel through the blood? Or did each generation make its own destiny?

Thor
also struggled to understand what this all meant for the Destiny Sword. If the
legend was true—that only a MacGil could wield it—did that mean Thor was a
MacGil? If so, how could Andronicus possibly be his father? Unless Andronicus,
somehow, was a MacGil?

Worst
of all, how could Thor ever share this news with Gwendolyn? How could he tell
her that he was the son of her most-hated enemy? Of the man who had her
attacked? Surely, she would hate Thor. She would see Andronicus’ face every
time she saw Thor’s. And yet Thor had to tell her—he couldn’t keep this secret
from her. Would it ruin their relationship?

Thor’s
blood boiled with rage. He wanted to flail out at Andronicus for being his
father, for doing this to him. As they flew, Thor looked down and scanned the
land. He knew Andronicus was down there somewhere. Soon enough, he would meet
him face to face. He would find him. Confront him. And he would kill him.

But
first, he had to find Gwendolyn. As they crossed over the Southern Forest, Thor
sensed she was close. He had a sinking feeling in his chest that something
awful was about to happen to her. He urged Mycoples faster and faster, feeling
that any moment could be her last.

The Magic Square - Tricking Your Way to Mental Superpowers by Lewis Smile
Russian Mobster’s Blackmailed Bride by Bella Rose
Love Story by Erich Segal
Game Changer by Douglas E. Richards
Faithfully Yours (The Forever Time Travel Romance Series, Book 1) by Spradling, Carol A.
The Siamese Twin Mystery by Ellery Queen
Rhapsody on a Theme by Matthew J. Metzger
The Snow White Christmas Cookie by David Handler
Mint Juleps and Justice by Nancy Naigle
The Stepmother: An Everland Ever After Tale by Caroline Lee