Read A Journey to the End of the Millennium Online

A Journey to the End of the Millennium 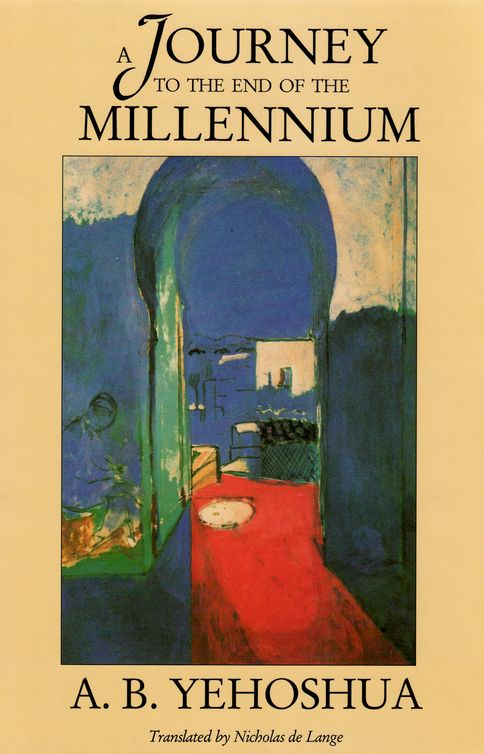 The Continuing Silence of a Poet:
The Collected Stories of A.B. Yehoshua

“It seems typical of this highly talented Israeli writer that we are left with more questions than answers after reading what he has to tell us and that the most urgent and disturbing questions are always more suggested by his work than stated in it.”

“Yehoshua … is very much the
enfant
terrible whose stories evoke the dreadful silence of a people who live on the edge of destruction. Paradoxically, Yehoshua — like his literary
Doppelgänger
Amos Oz — is today a Grand Old Man of Israeli letters.”

“The originality of these stories, their characters, and the emotions they express so precisely and movingly have remained so clearly in my mind that I feel justified in taking risks. I was as moved and impressed by them as when I read Mann’s
Death in Venice
and some of Chekhov.”

“…for Yehoshua has found a way of writing inside that no-man’s land where the perception of objective reality and private dream or hallucination jostle for position. Reading his stories you realise that this shifting between real and unreal is not peculiar to his characters. It is actually what goes on in our heads most of the time. I don’t know any writer who has transcribed this phenomenon so economically.”

“Yehoshua himself emerges through the collection as a writer of borderline states: he describes near-madness, near-death, near-sadism. People living under continual threat of war toy with their fantasies until they bring them to life. They succumb to a detachment that verges on cruelty or to a love that verges on masochism. They regard their lives with restrained despair, while secretly longing for tragedy and resolution. Yehoshua explores all this with understated formality and a difficult and moving honesty.”

“Even at his most prosaic, Yehoshua’s vision remains dark and menacing but this can be conveyed to powerful and haunting effect, as in “The Last Commander”, an offering to rank with the greatest of war stories. A welcome and far from silent collection.”

“It is a disturbing, brilliantly assured novel, and almost thirty years after its first appearance it retains a startling originality.”

“In place of the unifying and optimistic passions of Zionism, [A. B. Yehoshua’s] skilful, delicate prose depicts a darker country of insomnia, claustrophobia and disconnectedness, while the clever contrast of perspectives emphasises the vast gulf that can exist between people who supposedly love one another.”

“There is no scarcity of books about the Yom Kippur War but few have attempted to chart the inner human landscape as painstakingly as
The Lover
.”

“…a more vivid sense of the country than most documentaries would provide.”

“It is greatly to the credit of A.B. Yehoshua, that his major novel,
The Lover
, manages to convey in both breadth and depth the traumas of the Yom Kippur War without in any sense being a war novel.”

“Like Amos Oz, Yehoshua is proposing that the true realities of Israeli life are nighttime ones – dreams, nightmares, wishes and hopes – while the piercing light of day reveals only the mundane surface.”

“…a work of genuine distinction.”

“
The Lover
is a truly modern novel, filled with irony, ambiguity, inconclusiveness and images of the wasteland. It is an acute criticism of Israel, the Diaspora and contemporary values – it deserves our attention.”

“… thank goodness for a novel that is ambitious and humane and that is about things that really matter.”

“Anyone who has had experience of the sad and subtle ways in which human beings torment one another under licence of family ties will appreciate the merits of A.B. Yehoshua’s
A Late Divorce
.”

“Molkho’s adventures are quietly hilarious in the way Kafka is hilarious.”

“In this finely observed and oddly moving comic novel…Yehoshua makes us feel [Molkho’s] humanity – and deftly wins him our sympathy.”

“…a gentle comedy of manners about a widower in want of a wife.”

“This novel is all that a novel ought to be: comic, sad, human, and above all, with the ring of truth.”

“…Yehoshua fashions a totally absorbing work of art. So subtle is his skill that even scenes of brilliantly realized comedy are executed with such dry understatement that they catch the reader totally unaware.”

“In the opinion of one grateful reader, he has written a masterpiece.”

“Yehoshua’s poetic images conjure up bursts of dense Oscar Kokoshka color, the savage comedy of George Grosz’s caricatures, the playful humor of Paul Klee and even the stately gravity of the black-and-white illustrations of biblical legends. And all this is held together by the author’s murmuring irony and wisdom, which makes us hope that maybe, sometime, Molkho will fall in love after all.”

The Toronto Globe and Mail

“… a meditation on the cycles of change and renewal, and a portrait of a middle-aged man, glimpsed at a transition point in his life.”

“…a fiction that matters.”

“
Mr Mani
is conceived on an epic scale as a hymn to the continuity of Jewish life. This formulation sounds pat and sentimental, but Yehoshua’s achievement is the opposite: it always suggests even more complex worlds beyond the vignettes of which the novel is composed.”

“Suffused with sensuous receptiveness to Jerusalem – its coppery light, its pungent smells, its babble of tongues, its vistas crumbling with history – Yehoshua’s minutely researched novel ramifies out from the city to record the rich and wretched elements that have gone into the founding and continuation of the nation whose centre it has once again become.”

“Adjectives come racing to mind to describe
Mr Mani
, for instance ‘rich, complex, exotic, creative, informative’, but ‘easy’ is one that does not fit. On finishing it, this reader had the reaction that he had to turn back to the beginning in order to grasp more firmly the sources of his admiration…It is extraordinarily skilful to have captured the Jewish mixture of suffering and revival, despair and messianic hope, without in any way spelling out such heavy themes.”

“A.B. Yehoshua has created a historical and psychological universe – nearly biblical in the range and penetration of its enchanting ‘begats’ – with an amazingly real Jerusalem at its centre. It is as if the blood-pulse of this ingeniously inventive novel had somehow fused with the hurtling vision of the generations of Genesis. With
Mr. Mani
, Yehoshua once again confirms his sovereign artistry; and Hillel Halkin’s translation has a brilliant and spooky life of its own.”

“The one-sided dialogues not only give this complex novel a much needed simplicity of form but they also engage us. We begin to fill in the missing words until each of us becomes the silent partner. For this is more than just a tale of one eccentric family; it has the relentlessness of the Old Testament, the contentiousness of Job. The Manis not only pass down their sense of guilt, the source of their quixotic and often tragic fate, they ask in each generation what it means to be a Jew: are we not all from the same seed, are we not all ‘Jews forgetful of being Jews’?”

“In Yehoshua’s rich, grave fictions, private and public lives cannot be separated; the tale of a flawed individual or disintegrating relationship is simultaneously an emblem for a country in crisis. Literature is history, an event a symbol, writing a way of exploring the world. Yehoshua is a marvellous story teller but also a profoundly political writer, always arguing for uncertain humanism rather than zealous nationalism in a country where everyone lives on the front line.”

“…Yehoshua has here produced his own version of an epic chronicle, a homecoming in which the present is fulfilled in the past, the seed implicit in the future growth. The novel has something of the quality of a modern prophecy, of the still small voice in the wilderness.”

“
Mr. Mani
is one of the most remarkable pieces of fiction I have ever read, and convinces me more than ever of Yehoshua’s very great gift”.

“
Mr. Mani
, lucidly translated by Hillel Halkin, is Mr. Yehoshua’s most ambitious, wide-ranging novel. It is a literary tour de force that broadens the author’s vision and the novel’s boundaries beyond Israel.”

“To read A.B. Yehoshua is to submit oneself to the turmoils of the human heart. His are the type of books…I hesitate to start, because I find it impossible to put them down.”

“The novel flows powerfully in fluent, confident yet simple prose: it has a compelling story line and vividly drawn characters, and it is infused with a big and serious theme, the nature of love and the mysteries of the human soul.”

“At times literary and mannered, at times incantatory and magical, sometimes disturbing and often astonishing,
Open Heart
never fails to entertain the mind while it captivates the soul.”

A Journey to the End of the Millennium

“Wherever this innovative, erudite, suggestive, mysterious writer—a true master of contemporary fiction—points us, there can be no doubt, it is essential that we go.”

“Yehoshua is so graceful and eloquent that his work’s timeliness also succeeds, paradoxically, in making it timeless.”

“This is a generous, sensuous narrative, in which women adroitly manoeuvre within their inherited role, and theories of irrevocable Arab-Jewish hatred are obliquely refuted.”

“One of Yehoshua’s most fully realized works: a masterpiece.”

“Above all, Yehoshua is a master storyteller, who coaxes his readers far into an alien landscape, allowing him to question familiar orthodoxies—that moral codes are universal, that jealousy governs every personal relationship, and that religious boundaries are set in stone.”

Haiku by Andrew Vachss
Fire at Twilight: The Firefighters of Darling Bay 1 by Ashe, Lila
Waking Her Tiger by Zenina Masters
Burden of Memory by Vicki Delany
Pale Shadow by Robert Skinner
Murphy (The Skulls) by Crescent, Sam
The Girl Who Ate Kalamazoo by Darrin Doyle
The Mimosa Tree by Antonella Preto
The Wish by Winters, Eden
Things Could Be Worse by Lily Brett