Read A Home for Rascal Online

A Home for Rascal 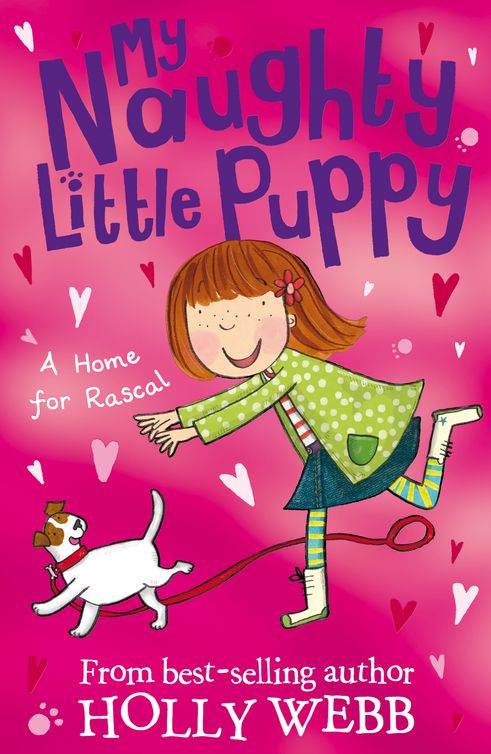 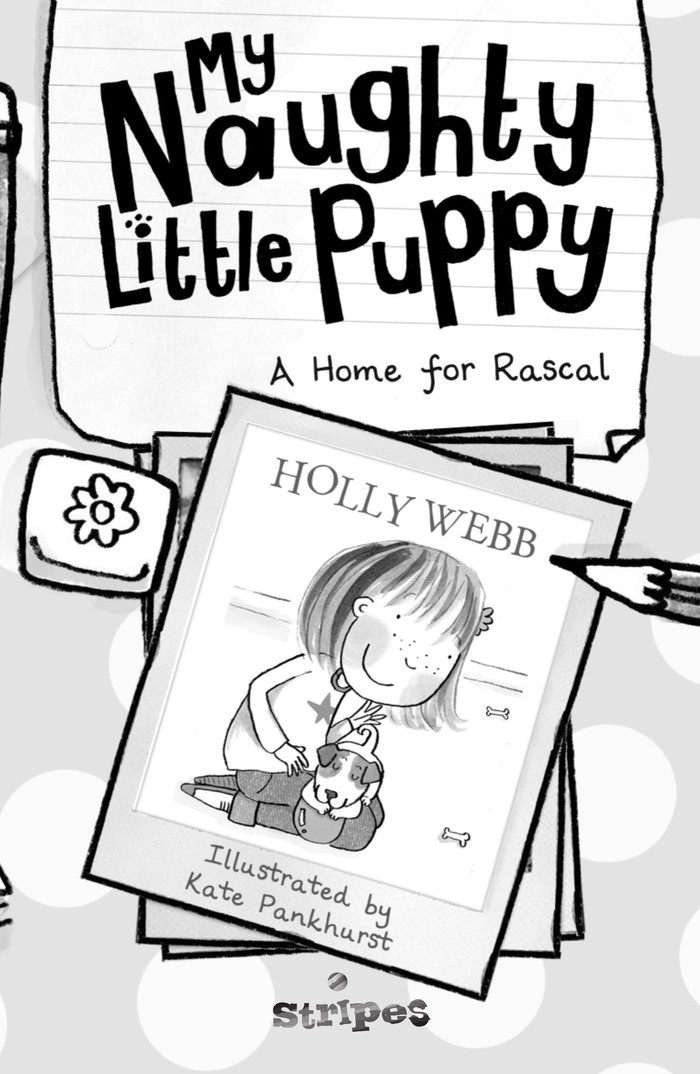 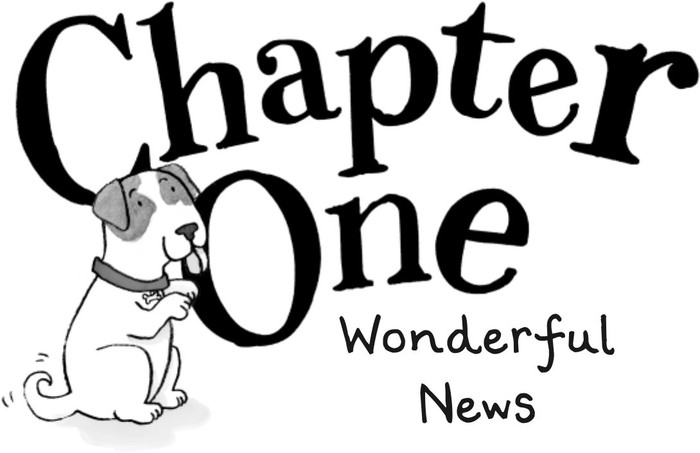 “You mean it? A real puppy?” Ellie whispered, smiling so wide that it almost hurt. She had been asking for a dog for ages, ever since her sixth birthday, which was just a bit more than two years ago. Auntie Gemma had given her a book about dogs, with pictures of all the different breeds. From then on, Ellie had been desperate to have a dog. But Mum and Dad had always said things like
I don’t think we’ve got the space
and
not
till you’re older
. This was a total surprise.

There was so much noise in the kitchen after Dad’s big announcement that he didn’t actually hear what Ellie said, although he couldn’t miss the smile.

“Now we just have to decide what sort of dog we want,” said Dad.

Ellie’s older brother Max was yelling and jumping around. “We need a really big dog! One we can run in the park with.” And her big sister Lila was tugging on Dad’s sleeve. “A red setter – they’re gorgeous, and they’ve got fur the same colour as my hair!”

Ellie frowned. Just like Lila to want a dog to make her look pretty, as if it was a new bracelet or something! Anyway, Lila was beautiful already. Lots of people who had red hair didn’t like it, and people teased them – all the boys at Ellie’s school called her Ginger – but no one ever called Lila names. They wouldn’t dare.

“We’ll talk about it when I get home from work,” said Dad. “I’ve got to go now, or I’ll be late. Bye, all of you! Don’t drive Mum mad!” It was only the end of the first week of the Easter holidays, and Ellie’s mum had already joked that she couldn’t wait for them to go back to school.

Ellie looked down at the drawing she’d been doing. Her dog magazine had a
gorgeous Jack Russell on the cover, and she’d been trying to copy it. It seemed a pity that Lila and Max both wanted to have a big dog. She had been hoping for a more cuddly sort of puppy. Something small, that she could pick up. Maybe it would even sleep on the end of her bed! A red setter would hardly fit in Ellie’s tiny room! 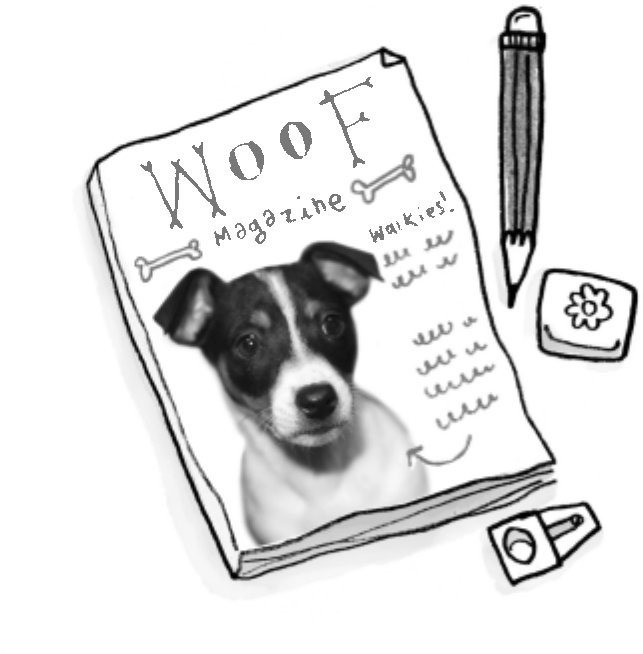 Lila started rooting through Ellie’s pencil case. “Please can you draw me a red setter, Ellie? Here, if you mix the orange and the brown crayon together, it’ll be the right colour.”

“I can’t remember what they look like,” Ellie muttered.

“You know you can draw anything. You’re so clever!” Lila beamed at her. “Please! I can describe one. Um. Floppy fur and a long, feathery tail.”

Ellie began to draw a dog that wasn’t really any particular kind.

“No, the fur’s a sort of orangier colour than that.” Lila held out the end of her ponytail. “Almost the same colour as mine, look.” 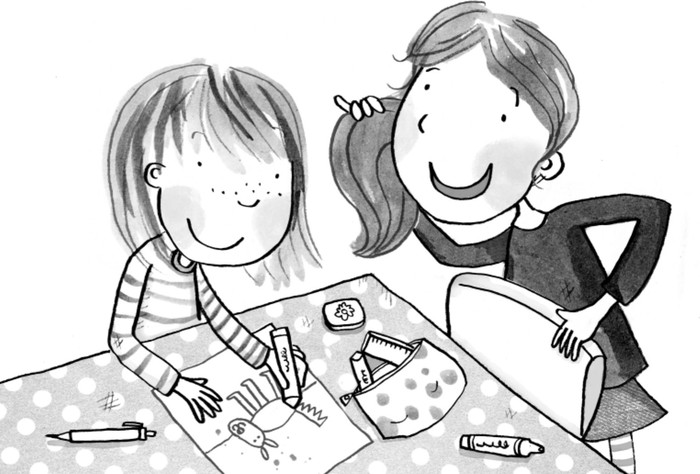 Max peered over at the drawing. “That’s good, Ellie. But we don’t want one of those fluffy dogs. Think of all the brushing!”

Lila sniffed. “Some of us don’t mind brushing our hair. It’s only you that doesn’t know what a comb looks like.”

Ellie ignored them as they started arguing. Lila and Max were only a year apart and they fought all the time, although it had got a bit better since Lila started secondary school. Ellie went on drawing, but she still didn’t think she’d got the red setter quite right. She’d have to look it up in her dog book later. Still, Lila seemed to like it, and she went off to put the drawing on the pinboard in her bedroom.

Suddenly, there was a loud banging and scrabbling at the front door, and Ellie dashed along the hall, calling to her mum, who was hidden away in the little room under the stairs where she kept her computer.

“I think it’s Christy, Mum, can I go for a walk with her and Bouncer?”

Bouncer was a big golden Labrador who belonged to Ellie’s best friend Christy, and most mornings during the holidays Ellie went to the park with them. Mum poked her head round the door and smiled at her. “Course you can. Just think – it won’t be long before you can take our dog with you, Ellie!”

Ellie grinned back. That would be absolutely perfect. 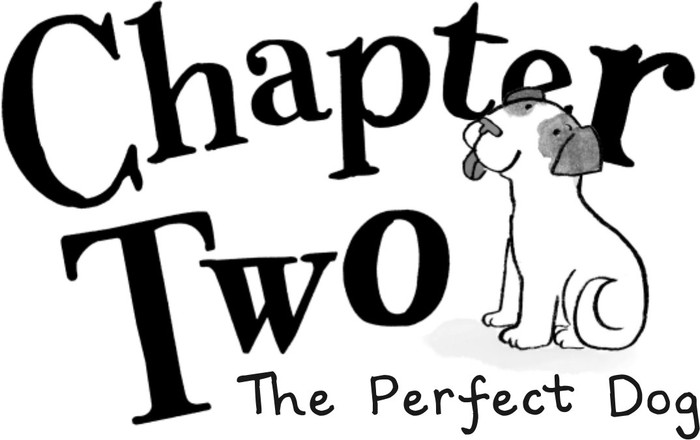 Ellie was almost dancing as she and Christy set off down the road. The park wasn’t far from Ellie’s house. Christy only lived round the corner too, so she was allowed to walk Bouncer there on her own, or with Ellie.

“What’s up with you?” Christy asked.

“We’re getting a dog!” Ellie told her, beaming.

“Really? That’s brilliant!” Christy stopped dead, accidentally jerking Bouncer’s lead
so he stopped, too. He looked up at her, confused.

“I know! I can’t believe they finally said yes!”

“What sort are you going to get?” Christy asked. “A Lab like Bouncer?” 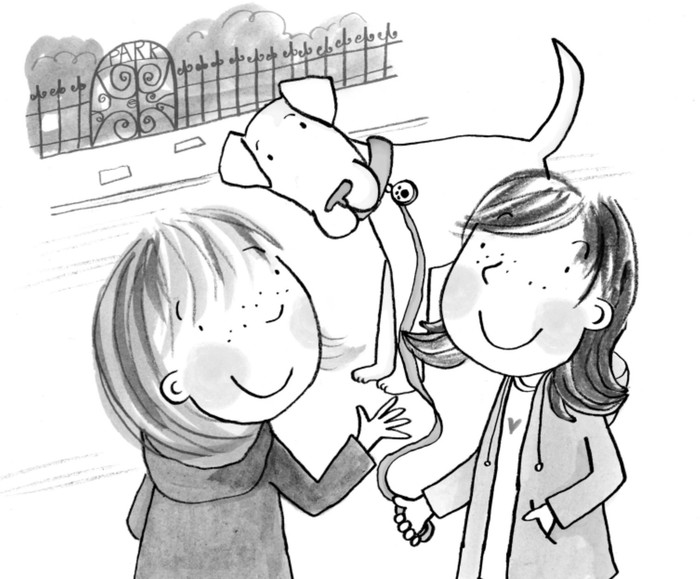 “We haven’t decided. Dad said we’d talk about it tonight. Max wants a big dog, and Lila wants a red setter, but I like little dogs.” She leaned over to pat Bouncer. “I love you, Bouncer! But I’d like a dog I can cuddle.”

Ellie sighed. “When I dreamed about having a dog I didn’t really think about having to share it with Max and Lila. Max is so sporty, he’ll want to do all the walks, and Lila will do all the grooming. She’ll be painting its claws pink! I won’t get to do anything!”

Christy shook her head. “I’m not so sure. Max is really loud. Dogs don’t like loud, Ellie, ’specially not when they’re puppies. They like gentle, cuddly people. Like you. I bet most
dogs would be scared of Lila, too.
I’m
scared of her!” Bouncer tugged hopefully on his lead and Christy started walking again. “And Bouncer loves you. He doesn’t like everybody, you know.”

Christy nodded. “I should think your new dog will love you. Besides,” Christy giggled, “it’ll want you to keep it safe from Lila!”

That made Ellie laugh so much that a lady walking past with a big-eyed spaniel gave her a funny look.

Ellie shook her head. “No, littler. What
I’d really like is a Jack Russell.”

Ellie thought for a moment. “Actually, I bet Mum would like a smaller dog. She always said we hadn’t got the space when I asked before.”

Christy grinned. “Then you’ll just have to work on persuading the others!”

When Ellie got home, she looked through all her dog books and magazines to find out as much as she could about Jack Russells. She piled them up on the kitchen table, and waited.

When Dad got in from work, she offered to make him a cup of tea.

Mum laughed. “What are you after, Ellie?”

“I wanted to show you what sort of dog I’d like,” she admitted. “A Jack Russell. Aren’t they gorgeous? And they’re small, too.” She turned to the right page in her dog book.

Dad picked up the book. “I’d been thinking of a Westie, but I could see us with one of these…”

Mum frowned as she looked over Dad’s shoulder. “It says they can be quite naughty.”

“I think that’s just because they get bored when they’re left on their own,” Ellie told her quickly. “I’d take ours for lots of walks. And even when I’m at school you’re at home, Mum.”

Max came in, looking very muddy. “Is tea ready? I’m starving! Hey, Dad. Are we going to decide on a dog?” He peered over at the book. “A Jack Russell?” He shook his head. “We want a big dog! Little dogs can’t go on proper walks.” 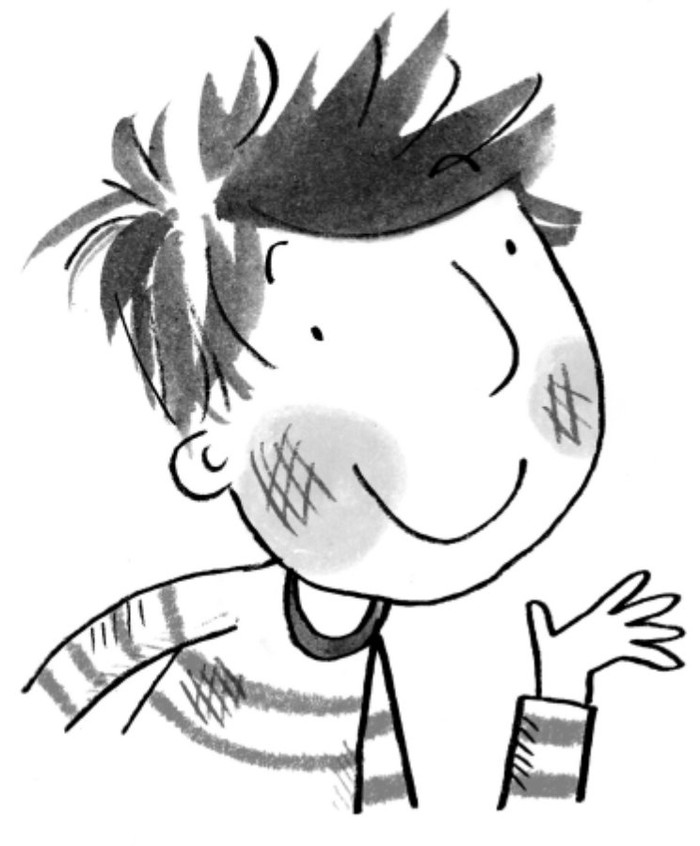 “Jack Russells love walking!” Ellie protested. “And they’re clever, Max,” she added, searching for the magazine she wanted. “You could teach our puppy tricks, look.”

Max looked at the picture Ellie had found, which showed a really
cheeky-looking
puppy leaping a metre in the air to catch a Frisbee in its mouth. “Maybe. Frisbee would be cool.”

But Ellie had a feeling it was going to be harder to persuade her sister.

When Lila came down for tea she showed everyone a red setter photo she’d printed off from a website.

Mum shook her head. “They’re such big dogs, Lila. And all that long fur, we’d have to groom it every day.”

“Every day?” Dad raised an eyebrow.

Lila nodded, but she was looking a bit doubtful.

“Sorry, I just don’t think we have the space,” Mum said gently.

“Lila, look.” Ellie had her secret weapon prepared. One of her dog magazines had a feature on clothes for dogs, with a photo of a super-cute Jack Russell posing in sunglasses and a little denim coat. Ellie thought it looked a bit silly, but she was sure Lila would like it. 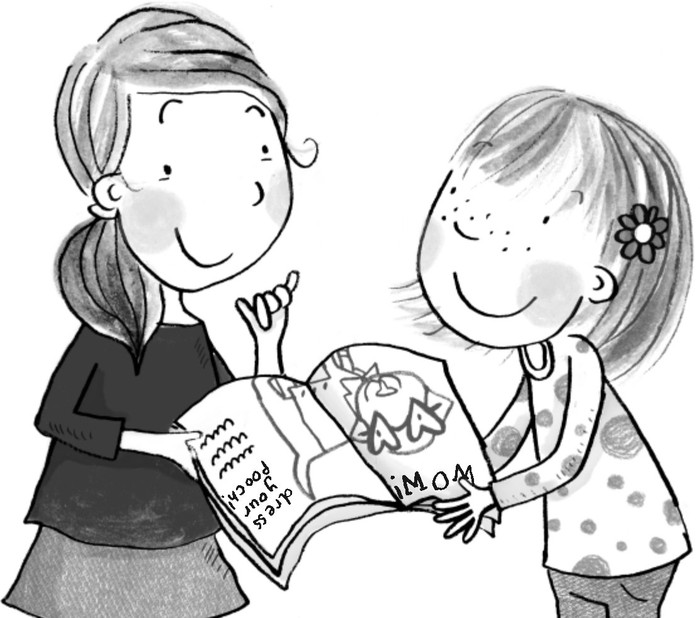 “I don’t think they make cute coats
red-setter-sized
,” Ellie pointed out. “Only for little dogs.”

Dad smiled and exchanged glances with Mum. “Right. Who’s coming to help me find a Jack Russell breeder on the computer then?”

After The Bridge by Cassandra Clare
Calibre by Bruen, Ken
Justice by Gillian Zane
Absolute Zero (The Shadow Wars Book 4) by S. A. Lusher
ICE (The Benders Series) by B.T Hoax
Marked by Destiny by May, W.J.
When We Were Animals by Joshua Gaylord
Nan Ryan by Outlaws Kiss
Comfort Food by Kitty Thomas
Fire Kin by M.J. Scott