Read A History of the Future Online 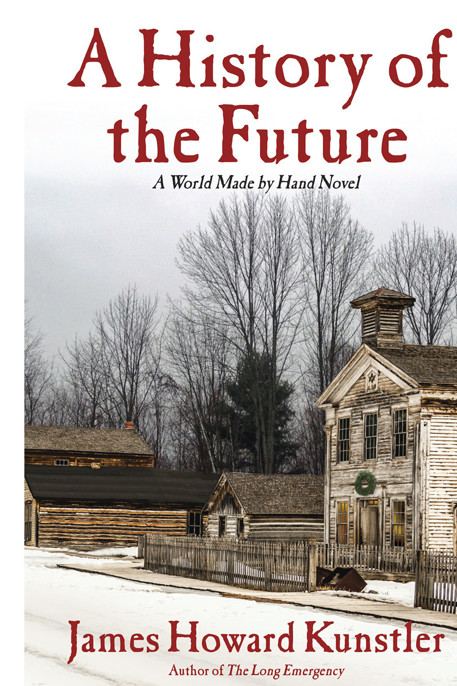 World Made by Hand

The Witch of Hebron: A World Made by Hand Novel

An Embarrassment of Riches

The Life of Byron Jaynes

A Clown in the Moonlight

The City in Mind

The Geography of Nowhere

A World Made by Hand Novel

All rights reserved. No part of this book may be reproduced in any form or by any electronic or mechanical means, including information storage and retrieval systems, without permission in writing from the publisher, except by a reviewer, who may quote brief passages in a review. Scanning, uploading, and electronic distribution of this book or the facilitation of such without the permission of the publisher is prohibited. Please purchase only authorized electronic editions, and do not participate in or encourage electronic piracy of copyrighted materials. Your support of the author’s rights is appreciated. Any member of educational institutions wishing to photocopy part or all of the work for classroom use, or anthology, should send inquiries to Grove/Atlantic, Inc., 154 West 14th Street, New York, NY 10011 or
[email protected]
.

an imprint of Grove/Atlantic, Inc.

This book is for Peter A. Golden,

comrade in the trenches of lit

Who are oppressed sore

You travelers through the wilderness

Through beating winds and chilly rains,

And waters deep and cold

And enemies surrounding you

Have courage and be bold

The electricity has flickered out. The automobile age is over. The computers are all down for good. Two great cities have been destroyed. Epidemics have ravaged the population. The people of a little town named Union Grove, in upstate New York, know little about what is going on outside Washington County. A messenger is returning with the news . . .

Two days before Christmas in the year that concerns us—a year yet to come in an America much beset by change—Brother Jobe, pastor, patriarch, and head honcho of the New Faith Covenant Brotherhood Church of Jesus, supervised the finishing touches on his pet project of the season: a tavern and place of fellowship on Main Street in the village of Union Grove, Washington County, New York.

Despite the hardship of recent years that had followed the bombs that destroyed Los Angeles and Washington, DC, and the attendant travails of a collapsed economy, and other serial calamities, this was a happy week for most of Union Grove’s people. The growing season, which extended three weeks longer than in the previous decade, brought a bounteous harvest (apart from the troubling appearance of a previously unknown corn smut in a few farmers’ fields). The town had gotten through the year without suffering a major epidemic like the ones that had burned through the region in past years and decimated the population, though there was plenty of routine illness for the weak and unlucky. A community laundry was close to opening in the repurposed Union-Wayland paper mill building beside the Battenkill River. It was the first new enterprise of size that the town had seen since the modern age drove itself into a ditch, a joint effort between the regular town folk and Brother Jobe’s New Faith brethren. They had arrived in late spring seeking refuge from the disorders elsewhere in America, bought the vacant high school, moved their seventy-eight members into it, and done much to stimulate a revival of community spirits in Union Grove, for all their odd ways.

Being Christmas week, the townspeople did their best to make festivity visible without electric lights. Fir swags festooned the porches and wreaths hung on doors. Lighted candles on windowsills flickered defiance against the year’s longest nights. Men and their children dragged balsam trees out of the woods and pine scent filled the crisp air all over town. Women pinned bright red sprays of winterberry onto their knitted hats as they went around trading and visiting. Horses wore holly sprigs on their cruppers as they clip-clopped along the streets. A bright sense of the holiday affected even the gloomier personalities around town, those who struggled in adjusting to the new ways of the new times. All that was missing was snow. The bare ground made everyone impatient for a new look. It had rained a few times the previous week, but when colder air finally swept through it felt as dry as the distant Canadian prairie it came from.

The farm laborers who lived in the village had been given the whole week off, with most of the year’s work completed. Many were out and about in town enjoying their rare hours of leisure, stopping to chat with friends, and visiting the other Main Street businesses that the New Faith people had set up, including now the barbershop, the smoke shop, and Brother Jobe’s “haberdash,” which sold new-made clothing to people who had all but run through the last ragged remains of their off-the-rack manufactured casuals from the old times. Russo’s bakery had received a shipment of scarce wheat flour from Albany that Stephen Bullock’s Hudson River trade boat brought back on its weekly run, and the bakery shop window was filled with Christmas cookies, confections, fruit jellies, panettones, gingerbread men, and a wondrous great
bûche de noël,
the buttercream frosted roll cake tricked out like a Yule log, baked just that afternoon, with meringue mushrooms and holly leaves of filbert paste—which was rumored to be destined for Bullock’s own table. Einhorn’s general merchandise store had laid in a stock of goods intended to please children: sleds, chess boards, lacrosse sticks, dolls (in costumes that looked suspiciously like the New Faith getups), puppets, a rocking horse, skittles and bowls, knock hockey, marble mazes, jigsaw puzzles, all things made by hand. There was nothing electronic on display and few of the town’s children would have even remembered what computer games were like. Terry Einhorn kept a big pot of cider warming on the woodstove for customers. His chore boy Buddy Haseltine, who had the mind of a child, wore a floppy Santa Claus hat and a broad smile as he carried in an armload of stove billets from out back. He loved this time of year when the store was so busy.

Brother Jobe’s new Union Tavern stood at the center of all this activity, in the generous corner storefront where Van Buren Street came to a
T
at Main. The space, in a fine three-story redbrick business block with marble steps, lintels, and string courses, had originally been built to house Alger’s Drug Store in the year 1902. It was operated by Alger’s grandson until 1981 when a Walgreens opened in the strip mall at the edge of town. The loss of the soda fountain alone was a blow to the life of the town. For decades after that, the shop front was given over to Luddie’s Pizza, with a big internally lighted plastic sign that spanned the frontage and turquoise paneling above. It covered up the whole Main Street facade, including all the upper-story windows. The interior was a motley assemblage of vinyl, linoleum, stainless steel, and other clashing materials, which had all looked even worse under the harsh fluorescent lighting. In those days, Americans virtually lived on pizza and consumed it in settings that would make livestock feel queasy. As it happened, the entire Luddie family perished in the Mexican flu epidemic, and that was that. Meanwhile, the wheat flour scarcity, the lack of gas for the ovens, and changing work routines put an end to the century-long pizza craze. Like a score of other shop fronts along Main Street, Luddie’s remained dark and vacant for years as the economy sank.

Brother Jobe’s crew had taken off the turquoise paneling to reveal the old brick and the graceful arched upper windows. Then they set about gutting the first-floor interior, including the now useless stack of pizza ovens, and rearranged the kitchen in the back. The renovated middle room featured cherrywood wainscoting, a selection of castoff sofas and easy chairs arranged in sociable groups about a big woodstove, and a row of cozy booths along the other wall. Removing the greasy drop ceiling revealed magnificent old pressed tin twelve feet high. Up front, the New Faith crew had installed a twenty-foot-long cherrywood bar backed by an impressive array of mirrors above a row of kegs that contained the best ciders, beers, and ales produced around Washington County. The original transom that spelled out
ALGER’S DRUGS
in ethereal green, sapphire blue, and opalescent yellow stained glass had been rescued from the basement and was back above the door, while a new handpainted wooden sign over the breadth of the frontage spelled out
UNION TAVERN
in ocher letters that looked like old gold on a black background, with a welcoming pineapple stenciled at each end to denote hospitality. Both outside and in the place were decorated for the holiday with pine garlands and holly.

Brother Jobe paced fretfully in the front barroom, stopped, and pointed up at the chalkboard menu behind the bar.

“What do you mean ‘hot soup’?” he asked Brother Micah, the bartender and nominally manager of the new establishment, which would open its doors to the public for the first time in just a little while.

“Hot soup?” Brother Micah said. “Everybody knows what that is.”

“All soup is hot,” Brother Jobe said. “Why not just say soup?”

“Well, you say ‘hot’ to give folks the idea that it’ll warm them up on a cold day, make ’em feel good inside,” said Brother Micah, who had once worked in a Golden Polenta franchise restaurant back in the old times.

Brother Jobe just stared wearily with a sour expression on his face. A wintry ache crept through his joints. Along with all his other duties and responsibilities, getting the tavern ready had worn him out. Back in the middle room, two New Faith sisters bustled about. One set out jars of the New Faith red hot chile sauce on the tables in the booths and another lighted candles in the tin wall sconces. Daylight was fading at four o’clock in the afternoon this time of year. A painted sign that hung beside the woodstove said
NO CARD PLAYING, MARIJUANA, SPITTING ON THE PREMISES
.

“Ain’t it self-evident that soup is hot?” Brother Jobe said.

“It’s the psychology of the thing,” Brother Micah said. “You see?”

“The Battenville light rye, the Eagle Bridge corn, or the Shushan what-have-you?”

“What-have-you? Did they stick a possum in the barrel or something?”