Read A Fabrication of the Truth Online

A Fabrication of the Truth 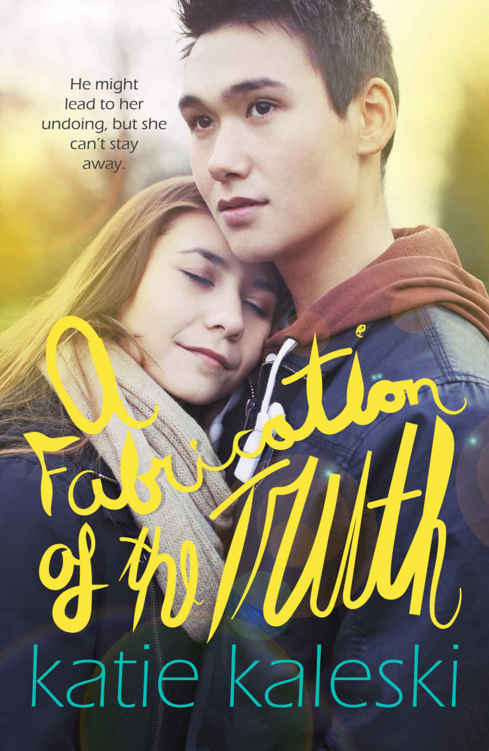 All rights reserved. Any reproduction of this publication either in part or in

whole is prohibited unless explicitly authorized by the copyright holder.

This is a work of fiction.  Any similarity to actual persons, places, or events is just

For the loves of my life, the best kids ever.

Children come into this world by way of their mother, but I did not. I blossomed out of a flower on a warm spring day. Fresh dewdrops glistened as they mingled with the afternoon sun, lighting the whole meadow in a sparkle while the air smelled so sweet from the gentle breeze. Woodland creatures – squirrels, deer, bunnies, birds – gathered and the flowers and trees leaned in close. Then a big, beautiful tulip opened up, and there I slept inside – a babe born fresh into the world. I thought the name Tulip would have fit me best, but instead, I was named Lexie – which naturally meant a girl who blossomed from a flower. Kindergartners didn’t care about correct details; they just wanted to know if there were unicorns. Five-year-old me said yes. There were always unicorns.

The story of my birth was the first lie I told to a captive audience, and it was awesome. I was queen of the circular carpet: pigtails, boogers, and untied shoes wanting to know more. It was also right after my mom left.

“There he is,” my friend Caroline said, leaning against the locker next to mine and checking herself out in her phone. Pleased with her reflection, she made some kissy lips, and then slipped the phone into her back pocket.

“Who?” I asked, digging in my locker wasteland of old notebooks, crumpled papers, and library books long overdue.

“That’s right, you weren’t here yesterday. You were sick.”

I had faked sick so I could catch the
From Rags to Fab
marathon, every single episode played back to back (not available on streaming). How could I miss out on that? I couldn’t, not for my favorite show. It’s a fashion-design challenge show where the contestants are pretty much thrown a bunch of rags and old clothes and have to remake them into something fabulous. I would be a champ on that show.

“I don’t get involved in that stuff.” I found my English notebook and slipped it into my backpack.

“Quick, quick! Turn, before he walks away.” She tugged on my sleeve. Caroline was an actress, so everything with her had added dramatics. To date, she starred in nine commercials: seven of them local, but two national. Chicagoland knew her as either that girl from the car commercial who said, “That’s a deal, Grandpa,” or the girl from the carpet commercial who petted the carpet a little too provocatively. Nationally, she was the girl who drank some prune juice because she couldn’t take a dump. She was so good at pretending to have a stuck poop, that they brought her back for a second commercial.

I zipped up my bag, sighed, and turned. Then everything froze. There were no more slamming lockers, no more kids joking around. There was no Caroline blabbing on, no air, no breathing, no words. It couldn’t be him, but there he was, right there in the hallway. How? I wasn’t sure how long I stood there staring, but it felt like an eternity.

My mouth must have been hanging open because when I felt a hand on my shoulder, my lips smacked shut. My heart resumed beating, and air reentered my lungs. He saw me and stopped. Our eyes locked—my heart now pounding in my chest. I licked my lips trying to think of words, but none came. I just stared at him – the him of now, of the moment – standing there in the hallway, staring back at me with his arms hanging at his sides.

Caroline was right: he was cute, but then he always was. He was of average height, though much taller than he used to be, and his hair – black and short except for a length in front – stood up against gravity. His dark eyes looked up from under long lashes, his lips with the perfect amount of plumpness. My brain couldn’t process simple thoughts, let alone the right descriptors.

He slowly walked toward me, and Caroline asked, “Do you know him? Who is he?”

“My undoing,” I whispered. I didn’t move, and he didn’t move any farther than a few steps.

Our eyes stayed locked and for some reason I couldn’t comprehend, my heart fluttered. He was okay. I doubted my grandma’s constant reassurances, but he stood there in front of me, not saying a word or even blinking. Maybe he thought he was seeing a ghost, because that’s what I thought. An eleven-year-old boy had haunted me for the past five years, and suddenly he was in front of me. I let out a deep breath and closed my eyes; it all came back. That day, the fear, my sadness. The end of my life as I knew it. I opened my eyes again as Caroline shook my shoulder and called my name. Dalton Reyes was gone.

My brain couldn’t focus on class the rest of the day. My teachers’ mouths moved, but all they said was, “Dalton Reyes.”

I thought about certain things daily: where my mom went, that my dad was in jail, to remember the lies, to never tell the truth, and Dalton Reyes. What happened to him after that day? Did he remember me? Did he hate me? Was it all my fault? Can you be haunted by someone who was still alive? Should I have talked to Dalton? As I asked myself that, my English teacher asked me something else, but I wasn’t sure what.

“Uh,” I said, looking up at my teacher, a short little woman with a pinched face and a penchant for animal prints.

“That’s what I thought,” she said.

What the hell did that mean? Okay, I wasn’t the best student, but she didn’t have to be mean.

“Yes, Lexie?” she said, crossing her arms over her chest as if I was wasting her time.

“I’m sorry. I was just thinking about Lucky.” I chewed on my bottom lip and looked up at her with big eyes.

“What are you talking about, Lexie?”

“See, I volunteer at this no-kill shelter,” I said, full-well knowing her weakness and how to get out of whatever slight trouble I was in. Mrs. Gerdshaw had a rescue dog, Paul, which she treated like her child and talked about all the time.

She nodded, taking a couple of steps closer to my desk. She bit the bait. I just had to reel her in.

“This dog named Lucky came in.” I looked at Mrs. Gerdshaw, who now had a gentler expression on her face and her chin in a hand. “His previous owners threw him in the dumpster. Poor thing was so abused.”

“It really was, and Lucky would just cower in the corner. Wanted nothing to do with anyone, and then this old woman came in. Said her husband died the year before, and she was having a rough time, so lonely.”

I could feel everybody’s eyes on me. The whole class wanted to know Lucky’s fate, and I knew how to end it. “So, yeah, that’s what I was thinking about.” You leave them hanging, and then they come back for more, making the lie more authentic. They make you carry it on.

“Well, what happened to Lucky?” Mrs. Gerdshaw asked with a tip of the head.

“Aren’t we taking up class time?” I asked.

“What happened to the damn dog?” this guy named Ray asked.

“Ray Smith!” Mrs. Gerdshaw said. “Lexie, I think you should answer the question, though.”

“If you all insist.”

I then made up some BS story about the old woman whom I named Wanda who magically brought Lucky out of his shell, and they went home together and lived happily ever after. Mrs. Gerdshaw thought it should be my topic for the next expository essay due in a couple of weeks. Luckily, she didn’t ask for the name of the shelter where I supposedly worked.

Caroline stood by my locker at the end of the day, her hair now swept up into a sloppy bun on top of her head. Switching classes was like switching scenes for her. Each new scene required a new look.

“You need to give me the details.”

“See, you know his name. That’s a sexy name,” she said, putting her fingertip between her lips.

“You think Dalton is a sexy name?” I asked, shoving her aside so I could open my locker.

“Maybe it’s the Reyes part, or just his face. He has a beautiful face. Do you think he has a girlfriend?” She had a dreamy, faraway look in her eyes, and her lips formed a little smile.

“I haven’t the slightest idea.”

“But seriously. You guys were undressing each other with your eyes or something in the hallway.” She waggled her eyebrows at me.

“We were not.” I flung my locker open. The door slammed into the locker next to mine, reverberating and then settling into place.

“Who is he?” she asked, poking me in the shoulder with one of her long fingers.

“He’s my neighbor’s grandson. That’s all.”

“Yeah, no big story there.”

“Hmmm,” she said, drumming her fingers on her chin.

“It’s the truth.” I pulled my jacket from my locker and slammed it shut.

“But not to you.” That was a lie in itself. Caroline knew some things – like my favorite food, that I liked to wear flats, that I had English fifth period, and that my parents weren’t in the picture – but nothing about my personal history, and definitely not about the last time I saw Dalton.

I defined myself by lies, and that day – the last time I saw Dalton, when that door burst open – the lies increased exponentially. It was a story I heard on the news, something that happened to somebody else. I was in New York with my mother, nowhere near my house at the time, I claimed. She was an apprentice to a fashion designer named Enzo, who was so exclusive that few people had ever heard of him. Sometimes my mom worked for Enzo, and on occasion, my dad. I’d say he worked security. Since my parents had an in, I had the finest designer clothes of all the girls at Miles North Middle School, and was in pretty good competition for best fashions at Shermer North High, too. I embroidered tags with the name Enzo on them by hand and sewed them into clothes I would make with my grandma. That’s how far my lies would go, and everybody believed me.