A Christmas Miracle for Daisy (Taming of the Sheenans Book 5) 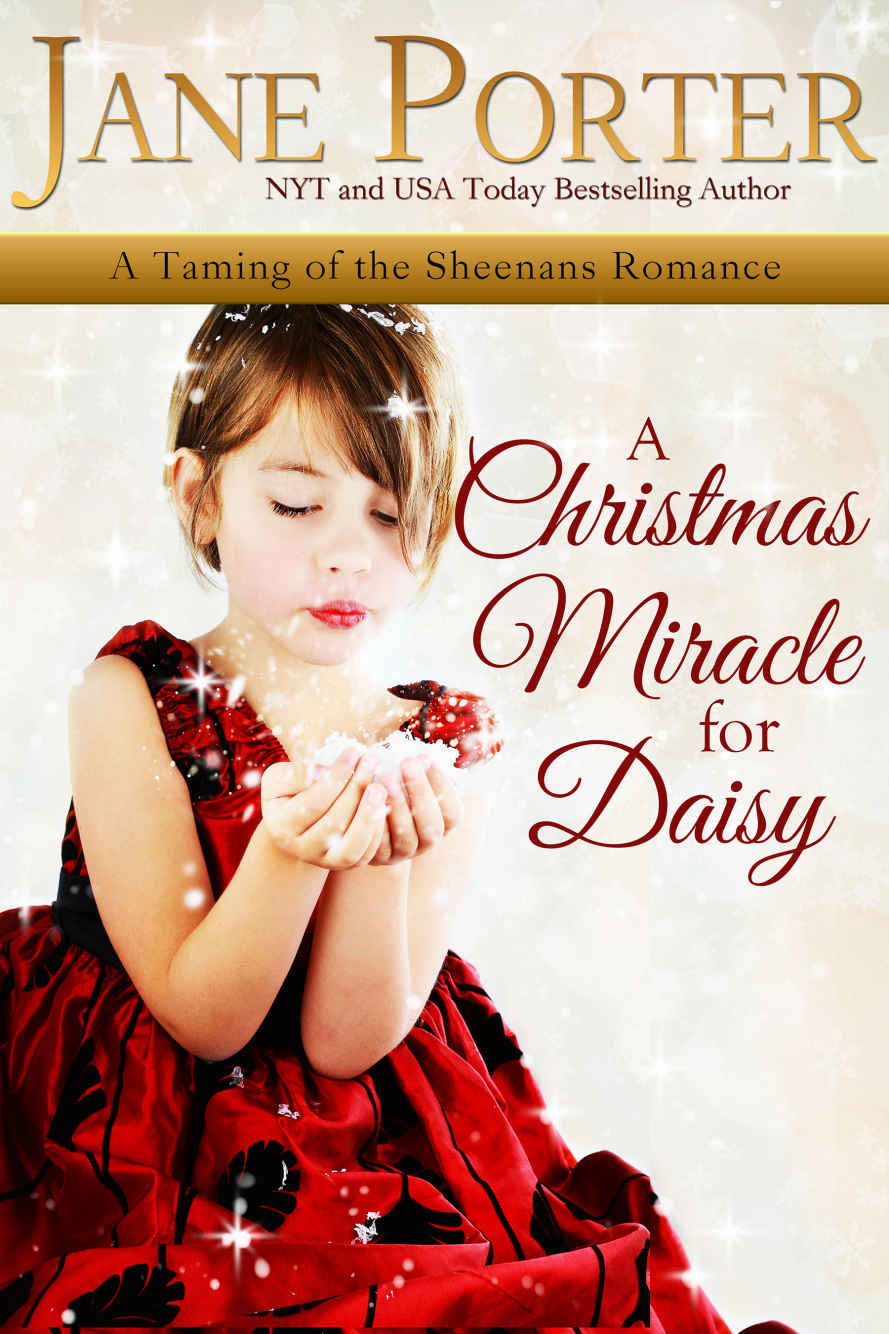 A Christmas Miracle for Daisy

A Taming of the Sheenans Romance
Book 5

A Christmas Miracle for Daisy

This is a work of fiction. Names, characters, places, and incidents are products of the author’s imagination or are used fictitiously. Any resemblance to actual events, locales, organizations, or persons, living or dead, is entirely coincidental.

So grateful you’re my friend.

This one is for you!

A Christmas Miracle for Daisy is a deliberate play on one of my favorite Christmas movies, Miracle on 34
th
Street. It’s an ode to hope and love and a child’s innocence as well as our need as adults to still have faith and believe.

I hope you will enjoy this story, and how tough single dad, Cormac Sheenan discovers how to open his heart and let the Christmas spirit in.

As you probably know by now, I have a weakness for Christmas stories. Cormac’s brothers, Brock and Trey, each have their own Christmas romance. Read Brock’s story in
Christmas at Copper Mountain
and Trey’s story in
The Kidnapped Christmas Bride
.

Stay in touch with me. I’d love to hear from you. You can find me at
JanePorter.com
, on
Facebook
and
Twitter
. You can also sign up to get my
newsletter
to always know what I have coming out next.

May you carry the peace and joy of Christmas in your heart all year long!

I
t was a
parent’s worst nightmare, the kind of thing that kept one awake at night, worrying.

And then it happened, on the day before Halloween, on the day Daisy had gone to school as the Disney fairy Periwinkle, the frost fairy. Daisy had been so happy, so excited to wear her pretty sparkly tulle skirt and satin and sequin fairy wings.

He could see her as he’d left her in her classroom. Beaming, blowing him kisses, thrilled that there would be a Halloween class party and that the Pre-K class got to parade through the whole school, visiting all the classes, even the big kid classes in junior high.

He’d left her reluctantly, wishing he could be there to watch the parade but he had a meeting in Los Angeles, an important meeting that couldn’t be missed. And so he kissed the top of her head and watched her dance over to the other little girls clustered around the white board and walked out, heading for the parking lot.

Cormac had made it to his meeting and was still in it when the first text hit his phone.

And then the next.
Live shooter on campus.

Cormac left the meeting immediately, dashing to his car but it was slow getting out of Los Angeles, traffic thick, snarling the 405 South until he sat wedged between trucks and cars south of Huntington Beach, unable to move in any direction.

His worst fear had come true.

Daisy needed him and he couldn’t get to her.

He couldn’t help her. There was nothing he could do.

Nothing until it was all over, and while the situation lasted—two hours, forty-three minutes, and a handful of seconds—Cormac Sheenan suffered, struggling with the reality that his four-year-old was in danger while he sat trapped in his car on one of the biggest freeways in Southern California.

He didn’t believe in helpless. Helpless was for the weak and those who couldn’t make decisions, and he was neither.

But during the San Clemente elementary school lockdown there was nothing he could do but wait for the next text to arrive. After the first messages from the school and sheriff’s department, the rest of the texts came from the frantic parents, parents like him who couldn’t get to the school, and then the parents who were there, but stuck behind yellow police tape and desperate for information.

The text exchanges were nauseating. Horrifying.
Live shooter. School on lockdown. First responders on scene but unable to enter school until the police and sheriff had secured the premises. One or more hit. A dozen ambulances on scene.

He didn’t know
anything
and the lack of information, and the inability to reach his daughter, pushed him to the edge.

He’d picked this school because it was small and set up on a hill overlooking the Pacific Ocean. The view from the school was stunning and he’d liked the tranquility of the setting and the warmth and efficiency of the staff.

Now he questioned everything.

His decision to enroll Daisy in a Pre-K class. His business interests, scattered all over the country. His ability to be a single parent.

And sitting there, so helpless, Cormac felt something in him crack.

He wasn’t a spiritual man. He didn’t talk to God. But inching along on the freeway, desperate to reach his daughter who had to be absolutely terrified, Cormac found himself praying.

She’s had enough grief and loss in her four years.

Keep her safe and I’ll change.

I’ll change. I’ll be a better man. I promise.

By the time he finally reached Daisy’s school, a heavily armed SWAT team was escorting children out, releasing them one by one to their parents.

Daisy ran towards him, her fairy wings gone, the tulle skirt of her costume torn. She was tearful but in one piece. He scooped her up and held her tightly, so grateful to have her in his arms.

His little girl needed to be safe, and as he rocked her, comforting her, Cormac realized he was done with the traffic and noise and chaos of Southern California. He was throwing in his towel, walking away from the congested sprawl of Los Angeles and Orange County and returning to Montana. Not just anywhere in Montana, but Marietta. It was the one place he never thought he’d call home again, but he was a father now, and he needed to put Daisy first.

But he wasn’t just moving Daisy to Marietta. He was relocating his corporate office, too. If his staff didn’t like the idea of relocating to Montana, then they could find another job.

W
hitney Alder stood
woozily in the very long line at the Denver pharmacy, waiting to pick up a prescription, feeling much like a sailor at sea.

She’d caught a bug earlier in the month after attending a conference in New York City. She’d taken a few days off, then returned to work but the bug had lingered on, settling into her chest, turning into bronchitis and now, walking pneumonia.

Her doctor today agreed it was time to get her on antibiotics, and had phoned in a prescription and Whitney was grateful to finally get some medicine, but could barely think, much less see straight. The blaring Christmas music didn’t help,
Sleigh bells ring, are you listening,
mocking the orange and black Halloween decorations festooning the long pharmacy glass window.

Whitney didn’t know which was more jarring: Christmas carols on October 30
th
, or that someone in the pharmacy had taken the time to cover the long window with beady-eyed rats, fanged spiders, and dancing skeletons.

Inching closer to the front of the line—apparently everyone in Denver was sick today—Whitney fished out her phone as it vibrated in her coat pocket. Andi, her assistant at Sheenan Media, had sent a text.
Something big is happening! Call me!!!

Whitney didn’t feel like calling anyone, but Andi was not an alarmist. If Andi was writing with multiple exclamation marks, something indeed was happening.

“I just thought you should know that there’s a big meeting with Sheenan Media’s executive team going on behind closed doors. It started an hour ago and they’re all still in the boardroom.”

As Creative Director for the media group, Whitney was part of the publishing division’s executive team. Normally she’d be at a meeting like that but she’d been out of the office for the past few days with her bug. “Do you know what it’s about?”

“I don’t know all the details yet, but Jeff had already gone home for the day and then suddenly he’s back, calling an emergency meeting and they’re all still locked in the boardroom at four o’clock on a Friday. That’s not normal.”

Whitney had to agree with her. That wasn’t normal. “And you have no idea at all what this is about?”

The Strange Return of Sherlock Holmes by Barry Grant
Waiting For Us (Beautiful Surrender, Part Three) (A Billionaire Romance) by Ava Claire
All The Ways To Ruin A Rogue (The Debutante Files Book 2) by Sophie Jordan
The First Time She Drowned by Kerry Kletter
#8 The Hatching by Annie Graves
The Night the White Deer Died by Gary Paulsen
Saving Lucas Biggs by Marisa de Los Santos
Surrender by Melody Anne
Chocolate Girls by Annie Murray
Yesterday's Weather by Anne Enright