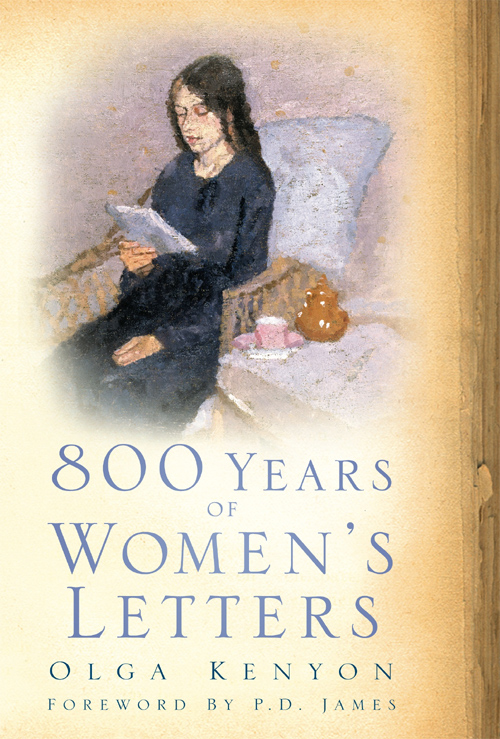 This ebook edition first published in 2011

The right of Olga Kenyon, to be identified as the Author of this work has been asserted in accordance with the Copyrights, Designs and Patents Act 1988.

This ebook is copyright material and must not be copied, reproduced, transferred, distributed, leased, licensed or publicly performed or used in any way except as specifically permitted in writing by the publishers, as allowed under the terms and conditions under which it was purchased or as strictly permitted by applicable copyright law. Any unauthorised distribution or use of this text may be a direct infringement of the author's and publisher's rights, and those responsible may be liable in law accordingly.

Original typesetting by The History Press

âWomen find under their pens turns of phrase and expressions which in us men are the result only of long labour and painful searching. It is women who can make an entire emotion be read in a single word.'

No literary form is more revealing, more spontaneous or more individual than a letter. Long before women were writing novels they were expressing their emotions, aspirations, hopes and fears in epistolary form, and those letters from past centuries which have survived can give us a more vivid and realistic portrait of the age in which they were written than many more portentous literary forms.

This fascinating anthology reveals a richness of experience which will be of interest not only to social historians but to all those fascinated by the way in which, throughout the centuries, women have responded to the opportunities as well as to the frustrations of daily living, and the way, too, in which the changing style of letter-writing has reflected the spirit and concerns of the age. It is through letters that women, parted from family and friends by catastrophes such as war, civil strife or rebellion, or by marriage and travel, kept each other informed of those details of everyday life, those small and large satisfactions, those trials and calamities on which the interest and happiness of daily living so much depends, as well as of the great rites of passage: death, birth and marriage.

As Jane Austen writes in
Northanger Abbey
, published in 1818, âEverybody allows that the talent of writing agreeable letters is peculiarly female'. In gathering together some of the most agreeable as well as the most notable of women's letters covering a period of eight hundred years, Olga Kenyon has performed a service to all who are interested not only in the written word, but in the changing lives of women and the way in which they themselves have perceived these changes. Some of the women who appear in her book were close to the heart of great national events, were the wives or associates of great men, or themselves have names which are part of history: Empress Maria Theresa, Florence Nightingale, Queen Victoria. Others are virtually unknown but come alive in lines which reveal the infinite variety and interest of their daily lives. Some were women of considerable erudition and intelligence, famed for their wit and political acumen; others lived apparently ordinary lives and wrote about more personal family concerns in letters which, in their directness, intimacy and sympathy, are even more fascinating than the epistles of famous and well-known women. Most were written with no thought of publication. Here is the intimacy of heart and mind speaking to heart and mind across distance and across time. In the words of Dorothy Wordsworth to her brother William, we âsee the beating of the inmost heart upon paper'.

Olga Kenyon has provided a scholarly and perceptive introduction to her anthology which adds to our interest in the letters themselves. In the words of HÃ©loÃ¯se:

If a picture, which is but a mute representation of an object, can give such pleasure, what cannot letters inspire? They have souls, can speak, have in them all that force which expresses the transports of the heart.

My aim is to show that women's letters are a valid form of literature. This book revalues a wealth of previously ignored female writing from the Middle Ages to today. In recent years, novels and poetry written by women have been reprinted (mainly by women's presses) and acclaimed. Women as letter-writers have been comparatively neglected, though often the letter was their main literary outlet. Such writing was merely esteemed for its information on the famous, or the world of men. No previous anthology has presented the richness to be found in women's letters, of interest both for historians and the general reader.

These letters are valuable for many reasons, including the range of topics discussed, and variety of styles. They show women using one of the few forms of writing open to them with wit and skill. Already in the earlier centuries women's correspondence matches the expressiveness if not the erudition of mens'. By the sixteenth century their scope has increased and they use the more complex, gravely formal discourse of the Tudor age, to draw attention to female needs. Lively conversational modes developed in the eighteenth century, when women were famed for their wit and political acumen. They prefigure the direct, sometimes colloquial registers of today.

This wealth demonstrates that a tradition of female letter-writing has existed for at least eight centuries. It had many functions: to inform; to instruct (children, even monarchs at times); to entertain family and friends with descriptions of society or daily life (by writers as amusing as Madame de SÃ©vignÃ© and Fanny Burney); to keep up relationships (a female quality); to convey news, before newspapers were widespread; to recount travels, before the time of the âforeign correspondent'; to give advice on many issues, from personal to public; to explore psychological problems, often with wisdom and insight, before counselling was thought of; to keep in touch, before the days of the telephone or cheap travel; to offer love and express caring.

More implicitly, and perhaps even more interestingly, these letters explore female experiences, viewpoints and emotions. The writer and the recipient gain a clearer sense of identity in cultures which underestimate their abilities by stereotyping their needs.

This study cannot be fully comprehensive, yet shows many women reaching eminently sensible or provocative conclusions on a vast array of topics, including both national issues and domestic concerns. They offer thoughtful solutions to deeply personal issues, from how to deal with family and health problems, to how to make life bearable even when isolated or poverty-stricken. There is heartfelt sympathy in response to fear of sickness and dying, the burden of mental depression, the boredom of monotonous routine. The many ideas for coping with children and work, difficult husbands, money, are well worth reading still. In a world which seldom listened, letters provided a sharing of dilemmas, an early process of therapy attempts at a constructing of a positive female identity.

Letters have one considerable advantage over conversation in that they are written with time for reflection, allowing choice of apt wording. They prove more subtle than talk in strategies for subverting patriarchal limitations. Because letters were the one form of writing which men did not find threatening (according to Virginia Woolf) they could both explore the sexist devaluation of female values and aid consciousness-raising.

Of course, there are many parallels with men's letters, in attitudes to topics and manner of expression. Nevertheless, women did not learn Latin and Greek. The training of men in the rhetoric of dead languages could have brilliant effects, as is well known, but it could be stultifying. Leonard Woolf testifies to the dreariness of translating for seven hours each day at a school as good as Westminster, even in this century, and Shakespeare's schoolboy crawled unwillingly to school. Women, not allowed this education, had to listen more carefully to adults to gain learning (even listening outside doors while their brothers were tutored, as in
The Mill on the Floss
, quite possibly George Eliot's own experience). This ear for real conversation, the power of oracy, enriches these remarkable missives.

My geographical range is wider than most anthologies, from America to Europe. I have lived and worked in France and Spain, which made me keen to include writers considered great there, still underappreciated here, such as Madame de SÃ©vignÃ© and George Sand, St Teresa and La Pasionaria. I enjoy their special tone and have made my own translations from the original.

Some of the writers have been continuously read since their own time, such as Lady Mary Wortley Montagu, in my view the most interesting letter-writer in the English language. Not one volume of her letters is at present available in print. This sad fact is yet more evidence of the relative neglect of some outstanding female writers, which at last I can redress a little with long extracts from three of her many books. Other writers in this volume, whose names are better known, yet still not fully appreciated include HÃ©loÃ¯se (to Abelard); Margaret Paston, Dorothy Osborne, Emily Eden, Isabella Bird, Empress Maria Theresa, Mrs Gaskell, Florence Nightingale, Edith Wharton, AnaÃ¯s Nin and Jean Rhys. Of course, most of us have looked at some letters by Queen Victoria, who wrote an average of six a day. At such a production rate some are unpolished, but many offer both her speaking voice and good advice. Recently, the actress Maria Perry collected all the letters and speeches of Elizabeth I in a delightfully illustrated volume, which displays her tremendous skill with words and arguments. On a par is Queen Isabella of Castile. She married Ferdinand of Aragon, probably a model for Machiavelli's
The Prince
, in 1469. Together they united Spain, Isabella accounted the more skilful politician of the two. It was she, and no other leader in Europe at the time, who had the sense to grant Colombus the small fund he requested to discover the spice routes to the Indies.

My aim is also to bring to a wider public women only recently ârediscovered' by feminist historians and critics. These include Hildegard of Bingen (1154â1201), the Mystic Abbess, respected by emperors; Christinede Pisan, the first woman professional writer, in fourteenth-century Paris; Aphra Behn (1640â89), now established as one of our great women writers, who virtually invented the novel with
Oroonoko, or the Royal Slave
(1688) and the scandalous
Love Letters Between a Nobleman and his Sister
(1684â7), from which I include passionate extracts.

The Crystal's Curse by Vicky de Leo
Grant Comes East - Civil War 02 by Newt Gingrich, William Forstchen
The Prophets of Eternal Fjord by Aitken, Martin, Leine, Kim
Duplicity (Spellbound #2) by Jefford, Nikki
For the Love of a Lush (Lush No. 2) by Selena Laurence
Hero is a Four Letter Word by J.M. Frey
The Rusted Sword by R. D. Hero
Emily Goldberg Learns to Salsa by OSTOW, MICOL
Turned to Stone by Jorge Magano
Before We Met: A Novel by Whitehouse, Lucie