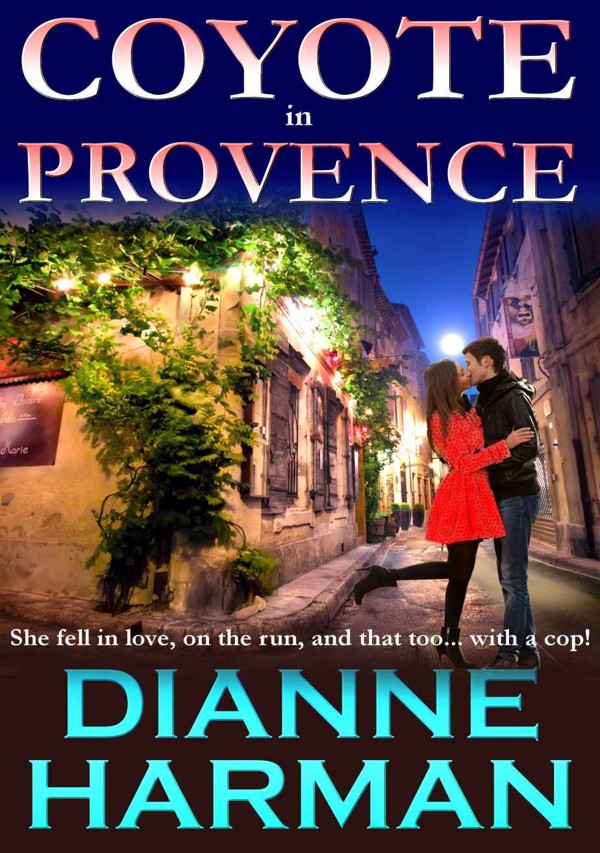 All rights reserved, including the right to reproduce this book, or portions thereof, in any form without written permission except for the use of brief quotations embodied in critical articles and reviews.

This is a work of fiction. Names, characters, places, and incidents either are the product of the author’s imagination or are used fictitiously, and any resemblance to actual persons, living or dead, business establishments, events, or locales, is entirely coincidental.

To my friend Jackie, who convinced me that readers wanted to know what happened to Maria after they finished reading
Blue Coyote Motel
.

Since arriving in Provence several months earlier, Elena had avoided contact with people, afraid that someone would discover her secret. She kept to herself, figuring the less people knew about her, the better off she’d be. Every day she lived in fear that the California police authorities would come knocking on her door. She hadn’t made any effort to become friendly with the village women, and as a result, developed a reputation for being aloof.  In turn, no one tried to make friends with her. By her own choice, she had become something of a recluse and a loner, living in her small cottage near the village of St. Victor la Coste.

Elena was aware that she had been the subject of conversations by the local residents. Like all villages around the world, gossip trumped fact. The inhabitants were always hungry for tidbits of information, particularly if it involved a beautiful rich American widow.

From time to time she wondered what she would do for the rest of her life now that she was living in Provence. She pushed those thoughts aside while she struggled with the symptoms of withdrawal from the drug known as Freedom.

She’d grown reliant on the drug and without it, she was experiencing bouts of depression. She felt lost and worthless as she tried to get the last of it out of her system.

Then there was the problem of no longer having access to the anti-aging hormone. Elena couldn’t help it. Every time she passed a mirror, she was compelled to look into it and see if she could see any signs of aging. When her husband Jeffrey died, so did the formulas for Freedom and the anti-aging hormone he’d been injecting her with for several years.

Lately she’d been having nightmares about Jeffrey. She’d wake up in the middle of the night, sweating, her heart beating, reliving that fateful afternoon in his secret lab at the Blue Coyote Motel, when her life had changed forever. Maybe it was time to find something to do, something to take her mind off of the past.

There’s not a weed left in the garden, the cottage is spotless, and I can’t continue cooking this much food just for myself.  Hate to admit it, but I’m not only lonely, I’m bored. Maybe I should get a job.  I don’t need the money, but it would give me something to do.  I wonder if Henri’s Bakery needs some help
.
Maybe he’d even hire me as a cook.

Five minutes later, after a short walk from her cottage to the village, she opened the door of the bakery and smelled the pleasant aromas of yeast, baking bread, and gently simmering soups.  It was 10:30 in the morning and the bakery was empty. The early morning croissant crowd had already come and gone and the lunch crowd had yet to arrive.

St. Victor la Coste, where Elena settled after she left California, was in an area of Provence known for its food, wine and art.  Henri’s Bakery had acquired a far-flung reputation for having superb food.  Even though it was very small and not open for dinner, it had earned two Michelin stars. The bakery looked like something out of a travel magazine with small tables set with red and white checkered tablecloths, both inside and outside.  Umbrellas covered the outdoor tables on the sidewalk and local wine flowed freely from the bottles on the tables.

During the summer months the village was crowded with tourists eager to eat, drink, and enjoy the local art.  Several nearby older chateaus had been converted into bed and breakfasts with reservations required up to a year in advance.  Although the village was about 150 miles from Marseille, many visitors felt the high quality of the food, combined with the outstanding work of numerous local artists, was worth the extra effort it took to travel to the area.  The village had become a mecca for art lovers who were hungry and thirsty, and Henri’s Bakery was at its heart.

There was one art gallery in the village and several more in nearby towns, all of which catered to the tourists.  Elena imagined it had been much quieter before it had been discovered by the “in” crowd, but the villagers made sure it retained its charm. She felt she’d been very lucky when the rental agent had driven her to the cottage located close to the small and charming village.

“
Bon jour, Mademoiselle
,” Henri said, greeting Elena as she stepped into the bakery. He was a walking advertisement for what the owner of a French bakery should look like. His hair was covered with specks of flour and his arms were thick and muscular from years of rolling out dough. Henri was a master baker, and his large belly indicated he also had a taste for his own food.

“
Monsieur,
although we’ve spoken to one another several times, we’ve never been introduced. I am Elena Johnson
.
I live in a small cottage just outside the village. I like to cook and I’m pretty good at it. I wonder if you could use some help in your kitchen for a few hours, maybe before and during lunch.  I thought I might make some soups and casseroles. My husband and I used to own a motel in California where I made meals for the guests, although it wasn’t a true restaurant.”

Over the months, Elena had noticed that Henri had two other people assisting him with the baking as well as an ever-changing group of young people who worked as the wait staff. Summers were very busy with the large crowds of international visitors who always seemed to find their way to Henri’s Bakery.

“
Mademoiselle
, pardon me, but I have heard you don’t need to work and that you inherited a great sum of money when your husband died.”

“I see you’ve been listening to the local gossip, Henri. While it’s true I don’t need to work for money, I do need to work for me. My days are becoming too long, and I have too little to do. You always seem so busy and I know your true love is baking. If you hire me, you could spend more of your time doing that.”

Elena was a very beautiful woman, a fact which had not escaped the town baker. Looking at her, he could feel his heart beat a little faster. She had deliberately gained weight after arriving in Provence to disguise herself, but even the additional twenty pounds couldn’t detract from her beauty.

“What kind of wage would you expect to be paid, if I hired you?  And before I hire you, if I do, I need to know if you really are a good cook. Why don’t you bring me lunch tomorrow and we’ll talk after that?”

“Thank you. I would expect to be paid whatever is fair, and I’ll be here at 11:00 tomorrow morning with lunch. That will give you time to eat before the lunch crowd starts arriving, and you’ll probably be through with most of your baking by then. See you tomorrow and thanks for considering me.
Bon jour
.”

Elena left the bakery and went to the small village grocery called
un épicier
, wondering what she could make for Henri that would make him want to hire her.
Debating what to cook, she walked by the meat counter. There, between plump chickens and double-cut pork chops, was a row of beautifully arranged veal shanks.

Ahh! What man doesn’t love braised veal shanks over rich, buttery noodles? Perfect. I’ll get two veal shanks, and I already have the celery, carrots and onions.  I’ve got fresh rosemary and thyme in my garden. I’ll make a strawberry and spinach salad to serve with it. That will add color, and they’re also in my garden. This will definitely work!

She rose early the following morning to get the rosemary, thyme, strawberries and spinach from her garden and spent the morning preparing the meal. At 10:50 she wrapped the plated veal shanks, noodles, and gravy with aluminum foil to keep them warm, transferred the chilled salad into a covered plastic container, and put it all into two small picnic hampers.

The meal wasn’t the only thing she’d carefully arranged. Elena had learned long ago the effect her beauty had on men. She had no qualms about unbuttoning her blouse a tiny bit lower than discretion advised. She wore a white silk blouse which clung to her ample breasts, along with a wide red belt encircling her waist over tight white silk slacks. She looked in the bathroom mirror and smiled approvingly.

As she walked down the lane to the bakery, she hoped Henri would like the lunch she had prepared for him. She also hoped his wandering eyes would approve of what she was wearing. She suspected they would.

“
Bon jour, Henri
. I’ve made a lunch for you of veal shanks with vegetables and gravy over noodles along with a nice strawberry and spinach salad. I didn’t bring any bread. You’re the master baker and your bread is far better than anything I can make. Would you like some wine to go with it?  It’s a warm day and a chilled rosé would be perfect.”

“Let’s go outside and eat,” Henri said. He moved toward the bakery door. He wanted to be sure that the village men saw that the beautiful widow was having lunch with him.

Henri was having a difficult time deciding whether he should continue looking at Elena or try the veal shanks she had made for him. The food won. He took one bite of a veal shank and knew he was going to hire her. It was not only superb, it was much better than any he’d ever made.

“Elena, this is wonderful. It’s the tenderest veal I’ve ever had. Please, share your cooking secret with me.”

“Actually, Henri, it’s a trick my mother taught me many years ago. I always brine white meat in buttermilk with some herbs and salt and pepper. I brined it for several hours yesterday afternoon, patted it dry, and put it uncovered in the refrigerator overnight. When I bake it, the skin crisps, but the inside stays moist. I’m so glad it pleases you.”

“Elena, I know you like buttered croissants, but that’s about it. If you care to tell me, I’d like to know more about you,” Henri said, looking up as he continued to eat.

“It’s no secret. My husband died after a long illness, and I needed to get away. I’d always read wonderful things about the Provence area of France and I thought I would see if they were true. I contacted a realtor when I got to Marseille and she showed me the small cottage just outside the village, where I’m living. I’ve come to love it here, but now I’m ready to do something. I would very much like to work here at the bakery. I hope you will have me,” she said, smiling as she leaned slightly forward over the table in order to give Henri a better opportunity to admire her cleavage.