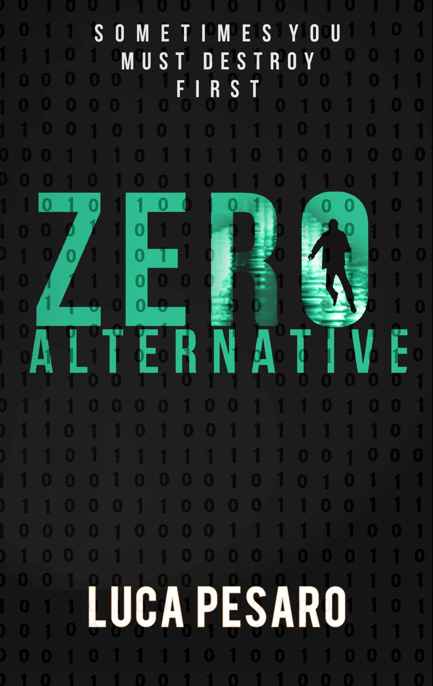 Luca Pesaro was born in Italy but has spent most of his adult life in the US or UK. After long years gaining a degree and masters in the pseudo-science that is Economics he got bored, jumped the gun and became a derivatives trader in financial markets. Zero Alternative is his first novel and he is hard at work on his second thriller. He is married to an awesome lady and they have two children who always manage to annoy, surprise and delight beyond any reasonable expectation.

The right of Luca Pesaro to be identified as the author of this work has been asserted by him in accordance with the Copyright, Designs and Patents Act 1988.

This book is sold subject to the condition that it shall not, by way of trade or otherwise, be lent, resold, hired out, or otherwise circulated without the publisher's prior consent in any form of binding or cover other than that in which it is published and without similar condition, including this condition, being imposed on the subsequent purchaser.

This is a work of fiction. The characters, incidents, and dialogues are products of the author's imagination and are not to be construed as real. Any resemblance to actual events or persons, living or dead, is entirely coincidental.

For Francesca, because I couldn’t ask or wish for more.

And for my Dad, who didn’t have enough time to see it, but I know he’s smiling.

PART ONE – THE DESCENT

PART ONE – THE DESCENT

you work more, you earn more

and there’s always an extra zero to be added
.

SHORT – Finance:
In finance short selling (also known as shorting, being short or going short) is the practice of selling securities or other financial instruments that are not currently owned, with the intention of subsequently repurchasing them (
‘
covering
’, ‘
hedging
’
) at a lower price
.

The trading floor was drowning in blood and fear.

The blood at least was metaphorical, a deep crimson red of computer screens flashing Stock Market quotes ready to spiral into monetary black holes. The fear was real though, and palpable. Droplets of sweat crawled on dealers’ faces, defying the air-conditioned chill. Grim nods and ticks multiplied as bankers wandered between the rows of monitors, waiting for the canteen to open and the caffeine to start flowing.

Scott ‘Yours’ Walker inhaled deeply as the glass doors slid shut, enjoying the sudden but familiar adrenaline rush. The financial markets around the world were about to stagger through a nasty morning, followed by a very bad afternoon.
This was going to be fun
.

The thirty-six-year-old trader hurried to his desk in the cavernous open space chosen by Dorfmann Brothers as the nerve centre of its Investment Banking operation. On the far wall, near the massive windows that overlooked Broadgate in the City of London, a few clocks highlighted various time zones worldwide. Walker ignored them: China and Hong Kong were shut for the Golden Week holiday, so East Asia was meaningless. Tokyo had just closed after a precipitous plunge in its Equity and Bond markets but Japan was crumbling anyway: the country had been imploding for months and the world had stopped caring long ago.

The problem was, again, in Europe.

Walker glanced to his right and saw that his eight monitors were already lit – Steph must have logged him on, just as he had told the junior trader to after seeing the results of the Italian snap election.
Good boy
. Random threats of violence and job loss for lateness always seemed to focus minds. The young Frenchman was nowhere to be seen though: probably helping out another one of the testosterone-fuelled dealers on the Volatility team.

Walker turned around, almost bumping into Anna Guarzelli, a lifer in the bank’s risk-management team. She held a coffee mug in front of her chest like a shield, her hand shaking
slightly. ‘You’re early,’ she said.

‘If you don’t get up on a day like today…’ Walker shrugged.

Guarzelli grimaced. ‘Nice, as usual.’ Her pupils scanned the floor nearby and she lowered her voice. ‘Seriously though, is this as bad as it looks?’

‘Yes. Can you imagine Italy defaulting and walking out of the Euro?’

‘Not really,’ she sighed. ‘We had a meeting, a couple of weeks ago… The top guys wanted scenarios for this, and we couldn’t quite answer. If a country that size breaks off – we are talking unimaginable losses. Bank failures, maybe even a Depression worldwide. Someone mentioned zombies in the street, and they were only half-joking.’

Guarzelli winced, her wrinkled eyes somehow incongruous in the glare of the arc-lights and the base buzz of computer fans. She must have been pretty once, but almost twenty years of studying dangers everywhere had taken their toll. She sipped her coffee carefully. ‘Do you think the European Central Bank will step in?’

Guarzelli shot him a dark look. Though a full-blooded Italian, unlike Walker, she always refused to talk shop in anything other than English. She probably just wanted to make sure that her back was covered, hidden cameras and all. Then again, Anna
was
risk control – he should stop goading her, really. Reluctantly, Walker put aside his mother’s musical language and returned to his father’s public-school flattened American English.

‘They can’t go in guns blazing,’ he continued. ‘Not because some actor nut has gate-crashed the elections. It’s strictly an internal political matter, and those EuroTower goons will sit on their backsides in Frankfurt, waiting.’

‘But Rossini was only supposed to get around twenty per cent of the votes, not a near majority. The man has won by threatening to take Italy out of the EU, for God’s sake. They have to do something.’

‘Like what? Send a couple of armoured battalions to Rome?’

Guarzelli’s stencilled eyebrows rose and she finished her drink. ‘I can’t believe how the pre-election polls got it so completely wrong. The markets will be shocked, and terrified.’

‘I know…’ Walker tried to hide his glee: the market had been wrong, but he – and DeepShare – had called it right. He wondered where DM was, to hug him, but the little mathematician hadn’t arrived yet. He shrugged and continued. ‘Look Anna, it’s fear and greed, same as it’s always been. Things will get a good shakeup and the world will go on. It’s just the usual game, no?’

‘Sometimes I hate traders.’ She glared at him. ‘Only because you have the right position to make money today… It’s going to turn into a bloodbath. For the floor, for Dorfmann. The entire Street will suffer, badly.’

Walker nodded and edged towards his seat, attempting to get away before he said something too annoying. He didn’t want to waste any nervous energy on a Risk Manager – it was going to be a long enough day without starting an early fight. ‘Is Jack Morden in yet?’

Guarzelli grunted. ‘I got him the reports earlier. He must be…’

A fire-alarm siren exploded in the sudden silence, inevitably followed by the monotonic announcer: ‘This is not a drill. Please leave the building from the nearest possible exit…’

Walker looked around in the semi-darkness, ready to break something. ‘You’ve got to be fucking kidding me.’

This could cost me millions
. It had already cost him almost twelve minutes: quite a lot more than he needed to go out, smoke, and come back in as soon as the first blockage around the Dorfmann entrance cleared up. Walker made it back to his seat and forced himself to calm down – the market opening was still almost half an hour away, plenty of time to get organised. At least Steph was already at his desk, bent over the squawk box, growling at someone, ‘Don’t care if you are busy… over here NOW!’

Walker smiled grimly. Stephane Buvier was in his mid-twenties, short with dark hair. Very much from Paris. He spoke English with a mild French accent, which only came out in full force when he was nervous or angry, like now. But as he strained to hear the muffled reply from the tiny speaker, he was chewing on his best pen. Something bad was going on.

The Frenchman jumped, turned to him and tried a smile. ‘Hi Boss, it’s… the system guys. They
just told me that after the outage we won’t be able to log into ORK for a couple of hours.’

Walker froze.
Please, not today
. ‘How the fuck am I supposed to trade without the bloody thing?’ ORK was the electronic dealing system that allowed every trader to buy and sell shares, Futures and Options directly onto the market. All orders were routed through it, and all executions were instantaneous.

‘Can… can’t you deal by phone, with the Futures guys on the Street?’ asked Steph.

Walker stared at him. ‘Do you have the faintest idea of how many billions I’ll trade in-and-out today? The markets are going to be all over the place, and voice broking is far too slow to make
real
money.’ He sighed and tapped on a mouse, but his rightmost screen remained dark. ‘We’ll need to be ultra-fast, or this could turn into a disaster. And the rest of the guys will get slaughtered without ORK.’ His stomach gave an unpleasant lurch, still simmering with the ocean of vodka he had drunk the night before. Straight 42 Below, as well.

‘Are those IT jokers coming over, at least?’

The Frenchman nodded his chin towards the back of the trading floor. Two engineers were approaching, both wearing worried expressions. In any Investment Bank technology supports acted like the enzymes that kept a body functioning, from changing smashed keyboards to hooking up all the various complex systems. But they also played the part of a punchball when things went wrong. Especially
trading
things. A new good techie was a lot cheaper than a new good trader. Traders knew that. Tech guys did, too.

‘What the hell is going on?’ Walker kept his voice low. He didn’t like abusing support people, unlike a lot of his colleagues who seemed to consider it an amusing non-contact sport. But he was approaching boiling point – the adrenaline had been coursing through his system for the last ten hours, rendering him almost sleepless, and 6.24
A.M.
was far too early for a headache.

‘It’s been a cyber-attack, Yours.’

‘They took us out – apparently everyone in London is off the grid.’

‘Out of what? Just ORK?’ Walker seethed. It was a ridiculous scenario. Without direct access, it’d be like trying to box with one hand tied behind his back.

The older of the two techies had spoken, a tall black man in his early thirties.
Ben – or Brett?
At
the moment Walker couldn’t care less.

‘Just hook it to our backup. The bloody thing falls over every three days, anyway.’

‘I’m afraid it’s not only that. Someone also blew up the main switch near Eurex. I mean,
physically
blew it up, with explosives. Apparently those madmen at Hackernym are claiming credit, the Germans are saying.’

‘Bloody anarchists,’ Walker swore. Still, he knew that Dorfmann had other electronic highways – no bank would entrust all its communications to a single channel these days. He smiled at the techies, trying to sound reasonable. ‘Fine. What about the Algo pipeline?’

Shepherd Moon: Omegaverse: Volume 1 by G.R. Cooper
Little Dog Laughed by Joseph Hansen
Curves and the Rancher by Jenn Roseton
Rambo. Acorralado by David Morrell
The Wolfe Widow (A Book Collector Mystery) by Victoria Abbott
Waking Up to You: Overexposed by Leslie Kelly
Never Ever by Sara Saedi
The Stone Man - A Science Fiction Thriller by Smitherd, Luke
A Dangerous Expectation (The Gentlemen Next Door) by Gray, Cecilia
Ellie's Song by Lisa Page