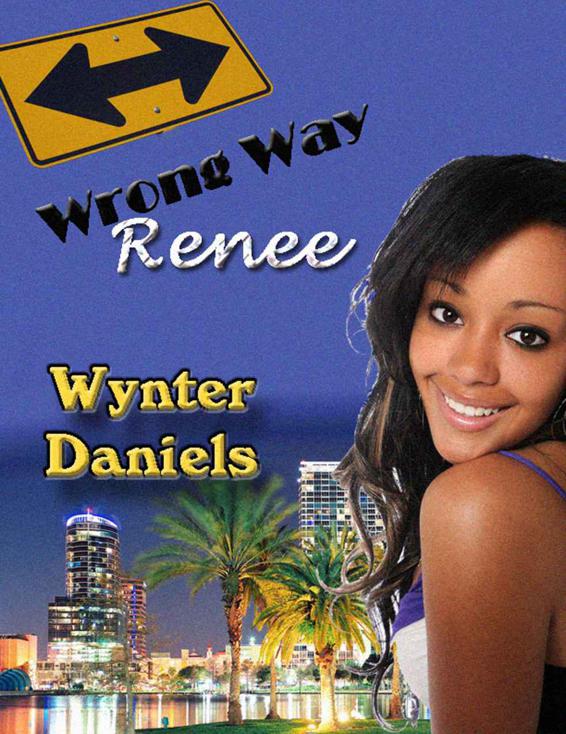 This ebook is licensed for your personal enjoyment only.
This ebook may not be re-sold
or given away to other people.
If you would like to share
this book with another person,
please purchase an additional copy for each recipient.
If you’re reading
this book and did
not purchase it, or it was not purchased for your
use only, then please
purchase your own copy.
Thank y
ou for respecting the hard work
of this author.

This book is a work of fiction. The names, characters, places and incidents are products of the writer’s imagination or have been used fictitiously and are not to be construed as real. Any resemblance to persons, living or dead, actual events, locales or organizations is entirely coincidental. All rights reserved. With the exception of quotes used in reviews, this book may not be reproduced or used in whole or in part by any means existing without written permission from the author.

It all happened in slow motion. A big, burly hand landed on Renee Wright's arm as she stood in line, waiting for the next available teller. She followed the hand to the arm, shoulder and body of a tall, muscular god. Her eyes drank in his form up to his face.

Wait, where was his fa
ce? There was something over it—
a sheer fabric distorted
his
features. What the hell? His face was covered with pantyhose.

Uh oh—this was bad.
His
arm slid over her, sending chills of fear and excitement tumbling through her as it
tightened
around her neck, forcing her against his barrel chest.

“Everybody down on the ground,
”
the man yelled.

His stale breath heated her neck. Goose bumps popped up everywhere. Her feet barely grazed the ground. The line dwellers dropped to the floor. Something hard push into her back. Did this excite him? Oh, it was his gun.

What if his hand slipped? What if he were startled?

Stay calm.
Just do what he says.

Why hadn’t she opted for
the drive-through to deposit her checks
like everyone else in the free world?

He shoved her forward to the counter
. “Get up and fill this bag.
”
Y
anking a plastic grocery bag from his pocket, he threw it across the counter
at a middle-age teller
.

The woman trembled as she loaded stacks of bills into the sack.

“Get it,”
he snarled at Renee.

She reached out and relieved the shaking teller of the bag, giving her a nod to assure
her
everything would be all right. Or maybe she was trying to convince herself.

“You're g
onna escort me out, got it?”
He turned
them
toward the exit and they moved in unison, like some weird dance
partners
.

Why her? Why couldn't he have picked someone else to use as his hostage? “Whatever you say.”
Sh
e tried not to stumble as she went.

“Shut up.
”
He locked his powerful forearm around her neck so hard she could barely breathe.

“You aske
d me if I got it, didn't you?”
Her voice came out in gasps. She'd be damned before a man would get the best of her, again. She contemplated
stomping on his foot
to get away, but thought better of it. He had a gun, after all.

“Shut up,”
he roared again, pushing her through the glass doors. A car screeched to a halt in front of them.

I am not getting into that car.

Didn't the newspaper articles always warn never to get into a vehicle with a bad guy? Her only chance was to fight. Gathering all her courage, she used her very expensive and soon-to-be-ruined heels as brakes against the sidewalk, digging in so the robber would have to drag all hundred-f
orty
pounds of her as dead weight.

“Stupid bitch.”
He
shoved her aside as he jumped into the car. She lost her balance and landed with a thud on a small patch of grass. Shouldn't have worn the khakis today. They'd be stained for sure. But that was nothing next to the cost of the shoes.

The car sped away, crossing three lanes of busy traffic as brakes squealed and horns honked. Realizing she'd been set free, she blew out the breath she'd been holding for who knew how long and wiped sweat from her forehead.

Sirens wailed in the distance. Pulling herself up off the ground, she brushed away dirt and grass. One police car zoomed past the bank heading after the robbers while another skidded to a stop right in front of her. The cavalry had arrived.

She shielded the late afternoon sun from her eyes and watched tall,
white
and kind of handsome jump out of the patrol car. She was never so thrilled to see a cop.

“Are you okay, ma'am?”
the officer asked.

Ma'am? When had she become a ma'am? Her
Mama
was a ma'am. She was only
twenty-nine
, for God's sake.
“I'm fine.”
Her heart slowed a little
. Everything was going to be all right now.

“Will you come inside, please?”
Sparkling sable-colored eyes captured her gaze.
“I'll need to take your statement. How many were there?
”

“Only the one
guy
came inside. There was another i
n the getaway car, of course.”
She wrestled her stare away, then followed the officer back into the bank.
Not bad for a white guy.
Nice rear view.

“Did
you get a look at the driver?”

“Sorry, no.”
She'd been too busy narrowly escaping certain death.

All the patrons huddled near the counter, comparing stories when Renee and the police officer approached. The din of voices and movement was deafening, the shrill of an elderly woman rising above the rest.

“Is everyone okay?” T
he officer got no answer.
“Everybody?”
he said louder. Still, no response.

Renee stuck her pinky and index finger between her lips and whistled
, something her dad had taught her when her very proper mama hadn’t been paying attention
. Everyone hushed and stared at her.
“T
his
police officer wants to speak.”
She gestured toward the
cop
.

The crowd faced him. He sighed, rolling his eyes at her.
“Thanks. Hi folks. I'm Officer Joe Morton. Is
anyone hurt?”
He paused, his gaze sweeping the crowd.

No one said anything.

“I'll take it from her
e, Joe.
”
The
booming voice
belonged to a Terrance Howard look-alike and Terrance happened to be the sexiest man alive as far as she was concerned. He
strutted through the doors like a rooster entering the chicken coop.
“Detective
Tyson Thomas
.”
He held his badge high over his head for everyone to see.

Officer Joe bristled beside her.

She kind of liked that a brother was apparently the white dude’s boss. But…something inside her wished it were the other way around. What the hell?

She reluc
tantly tore her eyes away from Officer Joe’s
.
“That's me.”
She twirled a long curl around her finger. When you were
fifteen
pounds overweight, great hair made up for a lot.

Damn. The brother sounded whiter than the white cop.

The detective flashed her a grin. His teeth were beyond perfect, bright white and straight enough to make an orthodontist weep.
“Get some statements over
there for me, Joe, will you?”
He waved his hand toward the other side of the lobby, dismissing the officer.

Officer Joe
headed toward the crowd.

The detective was
an inch or two shorter than
Morton
with
a
muscular build
he could have only achieved in a gym
.

She smiled her
six-hundred
-dollar smile.
Those teeth whitening sessions had totally been worth the money
. She leaned on the metal line-holder post so she could strike a pose. Unfortunately, it tipped over, sending her
crash
ing to the floor.
She scrambled to her feet.
“I do
stuff like that all the time.”
Heat rushed to her face.
S
he resumed the curl twirling—much safer.

“Let's not get hurt now, after all we'
ve been through already, okay?”
Thomas
winked at her
and patted her shoulder, all snake oil charm.

But he was so
good-looking
. His polo shirt was tucked into tight fitting jeans with bulges in all the right places.
This man was no hood hoodlum, as her mama liked to call some of the men Renee had brought home for her to meet.

“We'll take a look at the security video, but can you give me a description of the perpetrator? Height, weight, hair, eye color, sc
ars, race, that sort of thing.”
He took a small notebook from his back pocket and flipped it open, poised to write.
“Oh, give me
your full name, please, ma'am.”

Again with the ma'am.
“Miss
Renee
Wright
. He was
dark skinned, I'd say about six-
one
.”
She looked into his eyes and fluffed her curls.
“How tall are you?”

He puffed out his chest, stood a little straighter.
“Six feet
. Well, actually
five-eleven and a half.”