Words Without Music: A Memoir 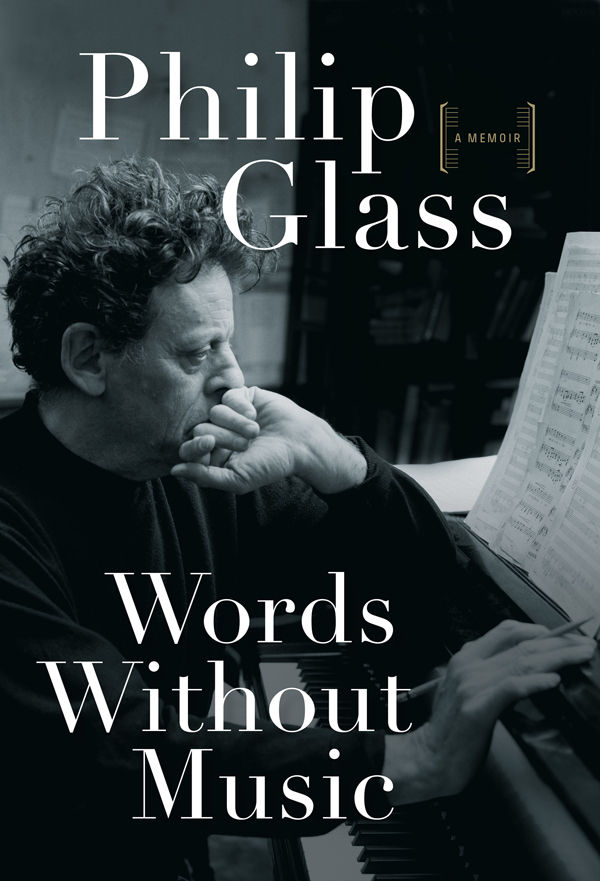 JOURNEY TO THE EAST

THE BLESSED DOCTOR OF THE TOMO VALLEY

EINSTEIN ON THE BEACH

“
I
F YOU GO TO NEW YORK CITY TO STUDY MUSIC, YOU’LL END UP LIKE
your uncle Henry, spending your life traveling from city to city and living in hotels.”

That was my mother, Ida Glass, when she heard of my plans. I was sitting with her at the kitchen table in my parent’s house, in Baltimore, having come back home after graduating from the University of Chicago.

Uncle Henry, a cigar-smoking bantamweight with a heavy Brooklyn accent, was married to Aunt Marcela, my mother’s sister, who herself had escaped from Baltimore a full generation before me. Uncle Henry was, in fact, a drummer. He had dropped out of dental school shortly after the end of World War I to become an itinerant musician, playing for the next fifty years mainly in vaudeville houses and holiday hotels, and with dance bands all over the country. In his later years he played in the hotels of the Catskills, known then and actually still now as the Borscht Belt. He was probably playing in one of those hotels—Grossinger’s, I’d bet—at that time in the spring of 1957 when I was planning my future.

In any case, I liked Uncle Henry and thought he was a pretty good guy. Truth be told, I was far from horrified by the prospect of “traveling from city to city and living in hotels.” I was rather looking forward eagerly to that—a life filled with music and travel—and completely thrilled with the whole idea. And as it turned out many decades later, my mother’s description was completely accurate. As I begin this book, that is precisely what I am doing—traveling from Sydney on my way to Paris by way of L.A. and New York, and playing concerts all along the way. Of course that’s not the whole story, but it is a significant part of it.

As a young man, incautious and curious, my head full of plans, I was already doing what I would always do. I had started playing the violin at six, the flute and piano at eight, begun composing at fifteen, and now, having finished college, I was impatient to start my “real life,” which I had known all along would be in music. Since I was very young I had been drawn to music, felt connected to it, and I knew that it was my path.

There had been musicians in the Glass family before, but the general view in my family was that musicians were somehow living on the fringes of respectability, that the life of music was not the life an educated person would pursue. People didn’t make a lot of money playing music back then, and to spend your life singing songs in a bar was not considered a serious undertaking. In my parents’ minds, there was nothing in what I was proposing to do to indicate that I
wouldn’t
end up singing in some bar. They weren’t thinking about me turning into Van Cliburn, they were thinking of me turning into Uncle Henry. Furthermore, I don’t think they had any idea what people actually did in music school.

“I’ve been thinking about this for years,” I said, “and this is what I really want to do.”

The fact was, my mother knew me. I was a very determined young fellow. When I said I was going to do something, I simply did it. She knew I would not take her objections seriously, but she felt like she had to say it, in a dutiful way. Neither of us thought what she said was going to change anything.

The next day I took the bus to New York, which already for decades had been the country’s capital of culture, finance, and ingenuity, to try to enroll as a student at the Juilliard School. But . . . not so fast. I had a handful of compositions and I could play the flute decently, but I wasn’t sufficiently accomplished in either to merit admission to the school.

Nonetheless, I auditioned for the woodwind faculty at Juilliard, this being three professors who taught the flute, clarinet, and bassoon. After I played, one of them, in an astute moment, kindly asked, “Mr. Glass, do you really want to be a flutist?”

Because I wasn’t
that
good. I could
play
the flute, but I didn’t seem to show the enthusiasm that I would need to succeed.

“Well, then! You should take the composition exam.”

I admitted to having a few compositions but declined to show them. I knew there was nothing of interest in that early work.

“Why don’t you come back in the fall and register in the Extension Division of the school,” he said. “They have courses in theory and composition. Spend some time writing music and then on the basis of that you’ll have an audition for the composition department.”

The Extension Division was run as an “adult education” program by an excellent teacher, Stanley Wolfe, himself an accomplished composer. The plan was to spend a year preparing for a proper audition as a composer where my work would be evaluated and my application considered. Of course, this was exactly the opportunity I was looking for. I agreed to their suggestion and followed it to the letter.

But first there was the “material” question. I would need cash to get started, though I fully expected to get a part-time job after settling in at the school. I took the Greyhound bus back home and applied for the best job close to Baltimore, which was thirty miles away at a Bethlehem Steel plant in Sparrows Point, Maryland, an already aging and tired relic of early-twentieth-century industry. Because I could read, write, and knew arithmetic (not common in those days at Bethlehem Steel), I was given a job as a weigh-master—meaning I operated a crane and weighed huge bins of nails, keeping a good tally of everything produced in that part of the plant. By September, I had saved more than $1200, which in 1957 was a fairly good sum. I returned to New York and registered for Stanley Wolfe’s composition class.

But before going into those first years in New York in the late 1950s, I need to fill in a few missing pieces of my story.

I
WAS THE YOUNGEST OF THE THREE CHILDREN OF BEN AND IDA GLASS.
My sister, Sheppie, was the oldest, then my brother, Marty, then me.

My mother was a dark-haired, attractive woman who always had a certain clarity to the way she looked. She began her life as an English teacher and then became the librarian of the school that I later attended, beginning in 1950, Baltimore’s City College, which was actually a public high school.

Ida was not an ordinary mother. Born in 1905, you could argue, and reasonably so, that she was an early member of the feminist movement, though she would never have described herself that way. Her understanding of the issue of gender in our society came through her own intelligence and the depth of her thinking. As she came to know the world, she was not content with the conventional role of the woman in America, the old German
“Küche, Kirche, Kinder”
—kitchen, church, children. Ida knew the value of education and she applied those values to herself, and as a result she was far more educated than anyone else in the family. She used some of the money she earned as a teacher to continue her studies, going on to get her master’s degree and working at the doctoral level. From the time I was six, and Marty and Sheppie were seven and eight, we were shipped off to summer camp for two full months while Ida took courses. I remember she even went to Switzerland to study after the war and came back with Swiss watches for all of us. They probably didn’t cost very much money, and mine didn’t last very long, but we were delighted to get them. My brother and I used to compare our watches endlessly.

While my mother was away studying, our dad, Ben, was left alone to look after his record store, General Radio, at 3 S. Howard Street in downtown Baltimore. He liked my mother’s sense of independence, and he supported her efforts.

Ben was born in 1906. His first job, when he was in his late teens, was working for the Pep Boys automotive company, going up into New England and opening up their stores. He became a self-taught mechanic and was good at fixing cars. Later, when he came back to Baltimore, he opened up his own auto repair shop. When they started putting radios in cars, the radios naturally began breaking, so he began fixing them, too. After a while he got tired of working on cars and just did radios. Then, as a sideline, he began selling records. Gradually the records took over the shop. There used to be just a six- or eight-foot space for records in the front of the store but eventually there would be thirty feet of records, deep into the store, as more and more people were buying them. His little repair shop ended up being just a bench in the back with him and one other man, named John.

THE DEAL: Novel by Bvlgari, M. F.
Into Tolari Space (Tales of Tolari Space) by Meierz, Christie
Free Fall by William Golding
The Normal Heart and The Destiny of Me: Two Plays by Kramer, Larry
The Ravishing One by Connie Brockway
A Pinch of Snuff by Reginald Hill
Collins, Max Allan - Nathan Heller 09 by Damned in Paradise (v5.0)
Small Apartments by Chris Millis
A Wizard Abroad, New Millennium Edition by Diane Duane
My Animal Life by Maggie Gee